Korean From Zero! Review: What KFZ Can Do for You

With the popularity of everything from K-pop to bibimbap, you’d think there’d be some fabulous resources for learning Korean, as well.

The truth, well, can get a little disappointing.

But today I want to talk to you about a resource that everyone who wants to learn the Korean language should know about.

How to Use Korean From Zero!

Plenty of second-gen Korean diaspora peeps like myself (and first-genners who grew up outside of Korea) remember how uncool and useless the language was considered in the ’80s and ’90s.

Some of us were actively or subtly discouraged from learning the language as kids. This means that many of us have only just begun to consider learning or picking it up again as adults. That’s where I found myself a while back.

At the time, we had begun to build a Korean learning program here at FluentU that’s now up and running.

I was excited that FluentU was making a Korean program available, and in anticipation of the video platform, I was looking around for ways to ground my basic language skills. I wanted to find something straightforward, at least kind of comprehensive, hands-on and preferably free or cheap.

This turned out to be harder than I had imagined, but I eventually started using the online version of Korean From Zero!, and it was the first program that really clicked for me.

I’ll tell you some more about how it works in a minute, but first, here’s how you can access it.

Purchase the books on Amazon. 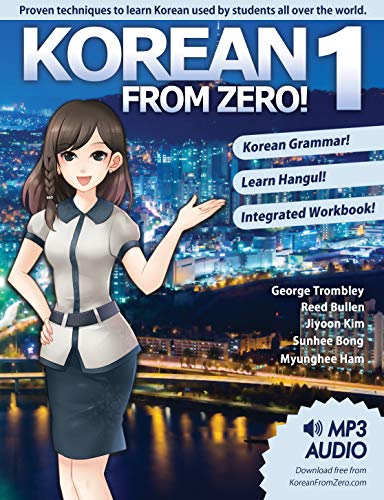 Korean From Zero! comes in the form of three books that you can buy on Amazon. These can be purchased either as e-books or paperbacks, and there are accompanying audio files on the website.

Or use the materials online (free).

Some people may prefer the books, and I’m sure the creators of the program appreciate being paid for their hard work.

However, one reason why learners should know about Korean From Zero! is that it’s a totally free learning option as long as you have access to a computer and internet. You can start right here.

The Goods: What You Get with Korean From Zero!

Three full courses that start at the very beginning and take you through the basics.

Whether you learn on the website or buy the books, you get three levels of courses that help you learn the Korean language.

Lessons in each course are numbered, but the first course also includes a section of lettered lessons that are meant to teach you Hangul.

If you already know Hangul, you can skip these lettered lessons and start with Lesson 1. Here’s a very basic idea of what each level covers:

Additionally, while these aren’t required accompaniments for the courses, there are some useful videos for learners on the Korean From Zero! YouTube channel (which doesn’t update anymore).

And Learn Korean in 5! gives you short lessons on language topics:

Explanations in Korean From Zero! are non-academic and highly practical. The explanations seem to serve the language examples rather than the other way around. 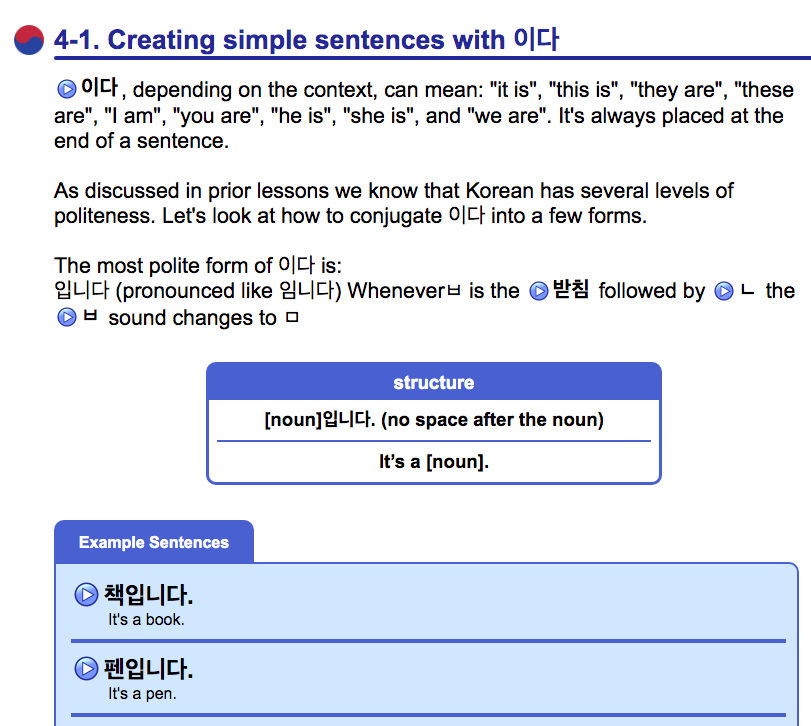 Additionally, charts and simple, clean graphics are often used to show language concepts. Lessons are organized more like notes you might take during a lecture than the lecture itself.

Lists of vocabulary and examples.

Each lesson is based around one language concept, and each comes with lists of vocabulary and example sentences interspersed with short explanations.

The program acknowledges in so many words that you may want to just learn some freakin’ phrases already rather than wait until you understand all the intricacies of grammar. So there’s a good balance in each lesson between learning how the language works and learning the language itself.

Accompanying audio clips you can play when you need them.

All vocab lists and examples come with audio clips. You can choose to either play through a list of vocab/sentences all at once, or to listen to each sentence or word separately.

The Pros: What Korean From Zero! Does Well

With Korean From Zero!, you don’t have to wade through long explanations before applying information.

What I like about Korean From Zero! is that it doesn’t do too much to teach you—it’s just there to help you teach yourself. It does give you details on the why of things and an order in which to learn, but the program isn’t in your face about it.

It’s flexible. You can move at your own pace.

Because the audio that comes along with the program is organized into separate clips and playlists, you don’t have to worry about keeping up with a whole audio lesson. You can just use the audio along with the text as you need it, and you can play and replay clips as many times as you want.

While there are explanations to read through, everything, and I mean everything, is immediately backed up by examples. 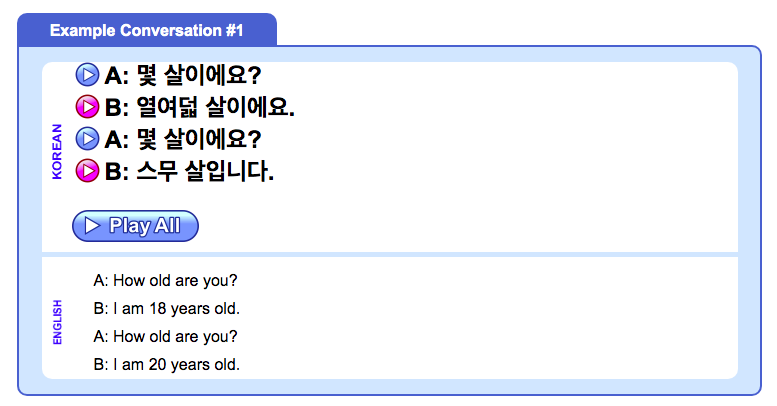 The Cons: Limitations of Korean From Zero!

The courses will only take you so far.

These courses will teach you a lot, but they won’t make you fluent in Korean.

However, the great thing about Korean From Zero! is that it can be used very well alongside other materials. I would recommend that anyone who uses it look into authentic materials, too.

The online version can be a little buggy.

I get the impression that this is probably because they’re constantly working on improving the program. I’ve occasionally seen bits of code splashed across a page and had some minor issues getting to where I was trying to go in a lesson. But none of this has prevented me from learning, and I’m not about to nitpick material that lets me learn Korean for free.

Also, there’s a button you can use to report any bugs you notice. I’ve never used it myself because there hasn’t been anything that bothered me enough, and all issues have seemed to clear up pretty quickly.

The lessons still can be used on a smartphone; you’ll probably just need to zoom in and out a bit. The website simply isn’t ideal for mobile use.

You could combine Korean From Zero! with a Korean learning app, so that you can still have something at your fingertips when you’re on the move.

There are virtually no online practice exercises.

One of the things I found most curious about the Korean From Zero! online version was the lack of practice exercises.

Yes, the website does a great job of explaining Korean grammar, using lots of audio and showing learners words in context, but without practice exercises, it’s a little tricky for the material to really set in.

Because of this, the online version of Korean From Zero! is really just a reference guide for grammar, vocabulary and pronunciation.

Who Korean From Zero! Is Good For

Those who want to learn from authentic media with a little bit of structure.

Authentic media is great, whether you’re learning from Korean music, Korean movies or Korean books. But it can be hard to dive into all of that right from the beginning, and as Korean is a language isolate, learners may generally need more structure than with other languages.

If you don’t want learning that’s too academic or fussy, but your K-dramas aren’t cutting it for complete study material, Korean From Zero! may be helpful for you.

Those who prefer learning independently.

In deciding whether Korean From Zero! is right for you, you should take into account the perspective this review is coming from: I’ve studied other languages as an independent learner, and I don’t like to be constrained too much in how I learn. That’s just how I am. I don’t like books that get all fussy over grammar before even showing me an example of what they’re talking about. I’ve been annoyed with other Korean learning programs that have just made me feel like I was being yelled at about how hard everything was going to be.

It’s possible you like long introductions to new subjects and that you’ll find the explanations in Korean From Zero! inadequate. In this case, you may want to consider whether you would benefit from using it alongside another course.

Those who enjoy a straightforward format.

Learning Korean may not be as difficult as some make it out to be, but learning any language is a challenge. So we don’t need programs that make it even harder.

With Korean From Zero!, you may still struggle from time to time, but you don’t need to learn how to use the program on top of everything else. You can skim through what you don’t need and linger on points that require more time. It’s easy to follow and easy to pick and choose from.

If you think Korean From Zero! sounds interesting, you have little to lose by trying it out online or trying an e-book sample from Amazon.

As it’s such a flexible and accessible resource, it’s probably good to have on hand even if you don’t end up using it as your primary learning resource.

So consider having some KFZ with your KFC (that’s Korean Fried Chicken).

Elisabeth Cook is a freelance writer and language learner who blogs about books, including some Korean ones, at LitAllOver.com.