7 Musical Hits to Get You Teaching Reported Speech Through Song

As you can see from the above example, reported speech is used to summarize or convey what was said in the past. An important part of conversational English, reported speech can be difficult for some students to learn if they don’t already have a grasp on verb tenses.

But with the help of music, you can teach your students how to use reported speech while rocking out to some of their favorite musicians.

7 Musical Hits to Get You Teaching Reported Speech Through Song

First and foremost, it’s important to remind your students that English has direct speech and reported speech, also known as “indirect speech.”

Explain to your students that direct speech is often indicated with quotation marks.

Reported speech, in contrast, is typically used for describing things people said in the past. Words such as tell, say and ask are used to report what was said to the listener.

Reported speech example: The teacher said that we must learn proper grammar.

In reported speech, the personal pronouns often change and you typically add “that“ after the verb.

Maximize the learning experience by carefully considering what songs you’ll be using, then adjust the activities accordingly. For example, if your class is filled with lower-level students, you may want to pick a song with simple, easy-to-understand lyrics to make these activities more accessible.

Below are some exciting activities using music to teach reported speech.

Listen and fill in the blanks

This activity is great for warming up your class.

For example, the song “Norwegian Wood” by the Beatles would look like this:

Before beginning the activity, spend some time in class going over the general rules of reported speech with your students. When ready, pass out the worksheet to the class and give them a moment to read over the lyrics.

Tell the class that you’re going to play the song one time as a warm-up exercise, and that they shouldn’t write on the worksheet. Instead, the class should carefully listen to the song and make note of any words they don’t understand. Once the song has finished, go over any new words and expressions with the class.

This time, play the song again and have your students listen while completing their worksheets. Once the music has finished, let your students share their findings. Make any corrections needed.

You can pair this activity with a session on FluentU, where students can watch music videos (along with other authentic English videos like movie trailers, news segments and inspirational talks). Once students have heard the song a few times, you can ask them to watch it in the FluentU program, where they’ll be able to check the meaning of any word by clicking on it in the subtitles.

Students can also compare their attempts to fill out the reported speech lyrics with the transcript that accompanies every FluentU video. While they watch, they can add unfamiliar words to their flashcard decks directly from the video players. For homework, they can study these flashcards with practice exercises that adapt to every individual student’s learning speed. 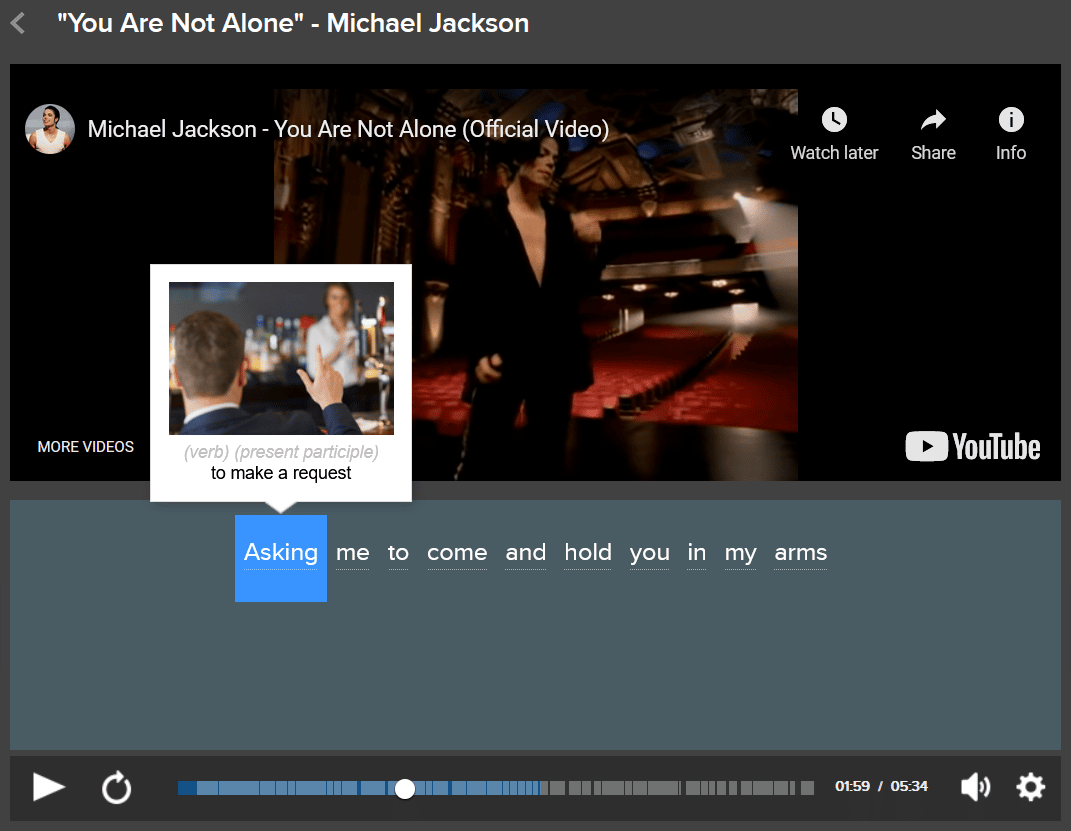 This is a good activity for testing student’s recognition of reported speech, as well as highlighting the differences between reported and direct speech.

Pick a song to play for the class, instructing them to identify and write down all of the examples of reported speech they hear in the song. At the end of the song, ask students to share their results. Make sure they correctly identify all samples of reported speech from the song, and write the answers on the whiteboard so everyone can check and correct their mistakes.

Once finished, get your students work individually or in pairs to change reported phrases into direct speech. Don’t forget to save time at the end of class for students to share their results with the class. And make any corrections necessary.

Change direct speech to the correct version of reported speech

This activity will require a little bit of prep time before class.

First, decide on the songs you’ll use for the lesson. Then, convert the speech in each song into direct speech and create a worksheet listing all of the direct speech conversions.

Determine whether you want students to work in pairs or as individuals, then hand out the worksheets. Instruct the class to change the direct speech back to reported speech while listening to the song.

Begin by playing the song (or songs) for your class. I recommend playing it more than once so they can hear the reported speech in the song. At the end of each song, have the students rewrite their sentences—be sure to give them ample time to complete the exercise. After finishing, go over the results in class, correcting any mistakes you come across.

This song is useful because of its simple and uncomplicated lyrics. Also, there are a few nice idiomatic phrases in the song, like “goes her own way.”

The use of reported speech in this song is a little atypical. Instead of being in the past tense, it’s in present simple and “that” is omitted from the phrases. Still, the song is great for showing students that there are always exceptions to grammar rules.

She says she has no time for you now;

She says she has no time

2. “Norwegian Wood” by the Beatles

This song is chock-full of examples of reported speech. It’s also fairly short and easy to understand.

“Norwegian Wood” provides an example of direct speech (We talked until two and then she said,“it’s time for bed”), which is a nice contrast to the instances of reported speech. The song includes important words, like asked, told and said.

She asked me to stay;

And she told me to sit anywhere.

She told me she worked in the morning…

I told her I didn’t.

3. “What Goes Around… Comes Around” by Justin Timberlake

A typical, angst-filled love song which most students will probably be able to relate to on some level.

“What Goes Around… Comes Around” is a song with many examples of direct speech. As a result, this will make your students work extra hard to identify the true examples of reported speech.

You said that you were moving on now;

And maybe I should do the same.

“Apologize” has some great examples of reported speech, as well as some nice metaphors, like: “I’m holding on a rope; got me ten feet off the ground.” You can use this song to dive deeper into metaphors and similes with your more advanced students.

As with many of the songs on this list, “Apologize” has a lot of repetition in the lyrics and chorus. This gives your students have several chances to pick up on the reported speech.

You tell me that you need me;

Then you go and cut me down;

You tell me that you’re sorry;

That it’s too late to apologize;

I said it’s too late to apologize.

This song only has one example of reported speech, but it’s a short and very sweet tune.

This song also provides some nice examples of direct speech, like when the singer asks the listener, “Shall I stay? Would it be a sin, if I can’t help falling in love with you?”

Only fools rush in.

6. “Somebody That I Used to Know” by Gotye

Gotye uses a lot of reported speech in his hit song, “Somebody That I Used to Know.”

The lyrics may be a little advanced for beginners, as they tell a rather elaborate and involved story, but your students may enjoy the challenge. I recommend playing the song several times for them, so they can catch all the instances of reported speech.

Like when you said you felt so happy you could die;

Told myself that you were right for me…

Well, you said that we would still be friends…

You said that you could let it go;

And I wouldn’t catch you hung up on somebody that you used to know.

Again, this song tells a fairly detailed story by relating to the memories of the singer’s childhood.

In a way, the whole song is an example of direct speech to the listener. However, there are some useful examples of reported speech sprinkled throughout the lyrics, too.

The cops hated us hangin’ out;

They say somebody went and burned it down.

We said someday we’d find out how it feels;

To sing to more than just the steering wheel.

Get Your Singing Voices Ready

As you can see, music is a great tool for teaching English. These are just some of the many songs that make use of reported speech.

Add these popular tunes for your next lesson on reported speech, or find some of your favorite songs to use in the classroom. Either way, your students will love learning more about reported speech through music.