But how do you do it?

Pair work and other similar ESL activities seem like the obvious choice, as students get a lot of talking time when they’re one-on-one. The downside is that this can be difficult to monitor, even if you have the right techniques. There are just too many conversations going for you to pop in on everyone and provide ample feedback.

On the other hand, if you attempt to get speaking practice in when students are in a big group setting, each student doesn’t always get the opportunity to speak, and shyer or weaker students tend to fade into the background.

While you can often work around this by calling on students at random when they’re beginners, with advanced ESL students it’s nice to be able to prompt a real, fluid discussion instead of forcing students to give brief responses to lecture-related questions.

Luckily, there are a few options that will allow you to ensure that each of your students is progressing as he or she should.

Class debates are an ideal way to get your advanced students talking, especially because there are several opportunities for speaking practice in one activity.

First, break your class into smaller groups of about four or five students. Debating in large groups saves on time, but it could cut down on how much each individual student actually gets to say. Depending on the size of your class, you may want to have two separate debate sessions, and have the students who aren’t participating in the debate judge the results for their classmates.

For the debate, give students an interesting topic and be sure to give them enough materials—in English, of course—to be able to address the issue you’ve assigned. A great way to do this is to choose a current events issue and give your students access to recent English-language newspapers, either online or in paper form, such as the The New York Times, The Wall Street Journal and The Guardian. The New York Times requires a subscription for full access, as does The Wall Street Journal (if you and your students use these sources on anything like a regular basis, you may find they’re easily worth the price). You can also give students a choice of three fascinating, topical debate topics and have them vote for which one they’d like to discuss.

Assign each group a side and give students approximately a half an hour to prepare their arguments. Each side should be aware from the very beginning that you’ll require an introductory argument (5 minutes), rebuttal (2 minutes), second rebuttal (2 minutes) and conclusion (2 minutes). Each student will be required to manage one of these arguments; for groups of five, the introduction can be split in half. This will ensure that all students have the opportunity to speak.

When it comes time to begin the debate, flip a coin to decide which group gives the first argument. Both introductions are then given; encourage all students to take notes during the introductions. After the introductions, give groups 2 minutes to formulate a rebuttal.

Rebuttals are then given, followed by an additional 2 minutes for a second rebuttal. Students are given 2 minutes to edit their conclusions, as needed, followed by deliberation by the jury or the teacher.

2. Film a News Show or Skit

Filming a news show or skit is a great way for students to include multimedia in their oral English practice, especially if your school has a multimedia lab. Unlike a more traditional skit that students simply perform in class, this concept allows students to use free editing software, such as iMovie for Mac, to edit their film together.

Decide, first, whether you would rather have students film a news show or a skit. Skits tend to be better for larger groups that are more advanced and older, whereas a news show is better for intermediate learners or when you’re a bit strapped for time.

It can be beneficial to model a news skit with native content from the FluentU program. With this tool, you’ll be able to showcase authentic English from news videos with learner support. Every video has interactive subtitles that let students pause and check the meaning of any word to avoid confusion. 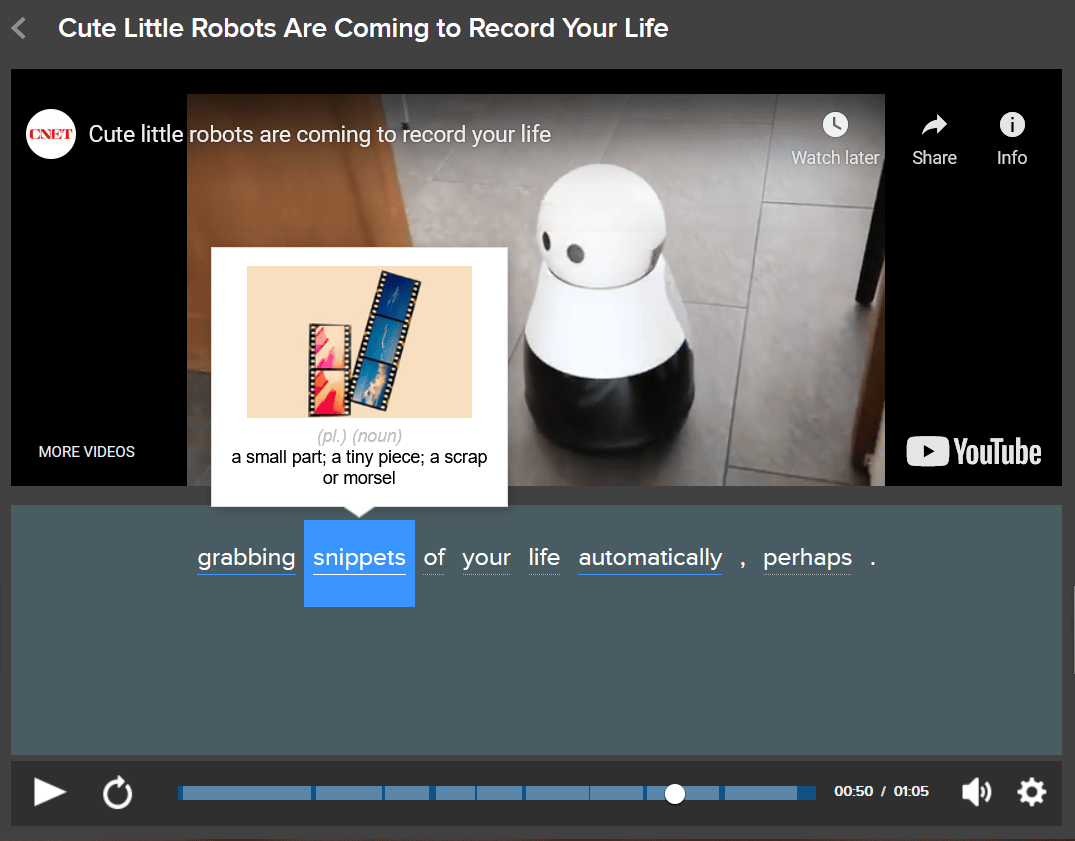 You can also make a flashcard deck with relevant terms from the various videos on FluentU, which (in addition to news segments) include movie clips, vlogs, inspirational talks and more. These flashcards will let students see the word in context in sentences and clips from other videos on FluentU. You can also use these flashcards to help students learn the words with adaptive exercises.

Once they’ve seen some examples and learned a few key words, students will need to conceive of the skit and write it. You may wish to give direction as to a topic, especially if you would like to link it back to something that you’ve been studying. For example, if you’ve been reading a novel with your advanced ESL students, you may ask them to reinterpret a scene from the novel. If you’ve been working on vocabulary, ask students to incorporate at least ten of their new words into the skit.

For a news show, each student will present the daily news (or invented news!) from each section, i.e. general news, sports news, weather news, local news. This option allows students to still experience the multimedia aspect of this activity without having quite as much to prepare.

Should you choose the first option, you should allow your students at least four class periods to prepare: one to conceive of their skit, one to rehearse, one to film and one to edit. For the news show, you could conceivably do the activity in just three periods—one to write the show, one to film and one to edit the show. Use an additional class period to have a screening of all of the students’ projects.

A murder mystery party can be a fun last day exercise before a big break or vacation. It’s a bit tougher to grade than some of the other ideas on this list (you may opt not to) but it’s endlessly fun for students and it can be a lot of fun for you as well!

Next, you’ll need to assign each of your students a character at the party. Each student will receive a card with secret information about his or her character, which the student should keep to him or herself unless asked a direct question by another character, in which case the student has to answer truthfully.

The aim of the game is to figure out who murdered the host of the party by asking questions and snooping for clues. You can leave clues around your classroom ahead of time, making them as simple as notecards describing an item (for example, a silver bracelet with a strange, rusty red stain on it) or you could create actual props, depending on the time you have to work on this project.

Improv games can be a great way to encourage students to speak spontaneously, which is a vital English skill.

While there are lots of different improv games out there, this basic improv game is great for the classroom. It’s fast, it allows students to speak quite a bit and it’s very adaptable, depending on the class that you have.

Choose three students to go on “stage” to start. Ask students in the audience to volunteer a place, which becomes the setting. From here, the students should begin to improvise a scene.

Right before the scene begins, ask each student to take a slip of paper, upon which you’ll have already written random words. The student must use the word in the skit at some point. Students have only 5 minutes to finish the skit and use each of their words before another three students take their place.

If you think that students need more guidance, you can also give them characters or a basic premise, for example, “you’re all roommates and you need to talk to Chris about the problems being posed by his pet alligator.”

As students get used to the game, you can also allow audience members to raise their hands periodically and throw in something new, for example, a student, when called on, might say, “Someone knocks on the door.” Or “A bird flies in through the window.”

This last idea allows advanced students of English to use their knowledge to correct their classmates, which gives them even more linguistic awareness.

Have them download a voice recorder app onto their phones, and allow students to interview one another. A variant of this may be to allow students to take on a persona, real or imaginary, and answer the questions as this persona.

Once the interview is over, have students listen to the recordings and correct themselves and one another. Ask students to justify their corrections, to ensure that they have understood the mistakes that were made. These corrections should be written out and turned in.

These techniques are only one element of teaching your advanced students to speak English.

The important thing is to help students overcome their initial fears of speaking, and to give them plenty of time to practice.

These activities will let you achieve both objectives!