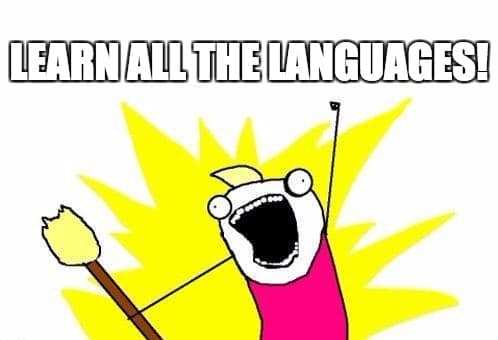 How I Learned to Speak 5 Languages (and You Can, Too)

In August of 2015, I made one of the scariest—but most rewarding—decisions of my life.

I decided to become a polyglot. I wanted to successfully speak five languages: English, Arabic, German, French and Berber.

At the time, I only knew very little French vocabulary that I learned from school and had intermediate Arabic skills. I also spoke Berber natively.

It’s been a little more than two years since I made that ambitious decision. Where do I stand today?

Well, for one thing, I’m able to write this blog post in English! I’ve also met hundreds of German, French and Arabic speakers along the way and have communicated with them in their native languages. As of this writing I’m an expert in Berber, upper-advanced in Arabic, advanced in English and intermediate in French and German.

If you’re an aspiring polyglot, I’ll show you exactly what I’ve been doing in the past two years to be able to speak five languages today. There are five key strategies I used to learn my target languages, which you can apply to your own multilingual goals.

Ready to join the polyglot club?


How I Learned to Speak 5 Languages (and You Can, Too)

Learning a language by yourself is an admirable (and totally possible!) goal. Solo education can also work for learning multiple languages, but if you have the time and some spare funds, one-on-one lessons make the process so much faster and more effective.

A language tutor will help you tackle the most important facets of your target language(s) and identify your personal linguistic weaknesses. But as expert language educators, they’ll also be able to help you accelerate the language learning process in general, with tricks you can apply to more than one language—whether it’s improving your memory for vocabulary words, finding cognates between languages, etc.

They’ll also keep you accountable in your studies, always pushing you forward.

To make learning fun, I always make sure I connect with teachers who share the same interests. I find this a crucial strategy to have a successful learning experience, especially as it minimizes “um…” moments and keeps the conversation going.

Just recently, I met a Spanish teacher from Catalonia and talked to her about her experience studying translation in Barcelona (which is something I’m interested in) and she helped me learn more about the courses available in Spain. Throughout our conversations, she’s taught me some basic Spanish vocabulary related to academics and translation.

There are a number of great online platforms where you can find tutors in any language. In particular you might want to check out Wyzant, which allows you to find experienced, vetted tutors both locally or online. That gives you tons of flexibility for learning a range of languages, no matter where you are or what your busy schedule looks like.

Language partners are two people who each want to learn the other’s native language. For example, during a language exchange session between an English and Spanish speaker, the conversation could be in English for 30 minutes and then Spanish for 30 minutes, so both people get to practice their target language.

After testing many language exchange platforms, the mobile app HelloTalk stood out to me in particular.

For me, what sets HelloTalk apart is the chat features (e.g. instant translation, voice-to-text recording, grammar correction, video and audio calls). Its language learning forum and huge user base (over 7 million members from all over the globe) also make it appealing.

With the basic free plan, you can only communicate with learners of your native language and speakers of one target language. But if you get a pro subscription, which costs about $2 per month depending on length, you’ll be able to switch between multiple target languages.

You may decide to chat in one language for a set period of time (say, a month) and then switch to another for the same period.

To ensure I don’t get ignored when I “pitch” prospective language partners, I usually include a hook in my first message. Here’s one of the messages I recently sent to a language partner from the U.K.:

“Hi Jessica! They say an Englishman laughs three times at a joke. The first time when everybody gets it, the second a week later when he thinks he gets it and the third time a month later when somebody explains it to him. Is this true?”

I only copied this joke from Reddit, but it was enough to leave a positive impression and win a new language partner.

Developing a native-level accent and comprehension skills is hard enough with one target language. How can you possibly achieve this for five separate languages?

Fortunately, there are innovative online tools that make it totally possible. FluentU is one that I always recommend when my friends ask me how I learn languages. FluentU will expose you to real-world videos, like movie clips, funny YouTube videos, news broadcasts and more, which’ve been supercharged with interactive captions. Just click any word you don’t recognize and you’ll get an in-context definition and native pronunciation.

Each video also comes with flashcards and exercises to ensure that you retain the new words. It’s an efficient and entertaining way to build your vocabulary, while absorbing your target languages the way they sound in real life.

Best of all, it’s quick and easy to flip between multiple languages. Just select your language on the “Settings” page and FluentU will reload with the relevant videos. FluentU has videos in many Romance languages, Asian languages, English, German, Russian… a polyglot’s paradise!

Since I set off on my language learning journey, I’ve always kept a multilingual language diary to expand my vocabulary and improve my writing.

My method consists of jotting down random words I’ve learned throughout the day and then mixing them up to create a story, opinion or to capture an idea.

Usually, I start off with English, then I translate the text into French and German.

At the beginning, I was only capable of writing one to three sentences a day in each language, which sometimes has taken me up to an hour. But now, because I worked at this consistently, writing has turned out to be one of the easiest and most enjoyable daily language learning activities I do.

In fact, I now am able to write one to two pages of German, English or French text in just a few minutes.

If you want to use this method, I highly recommend taking advantage of Google Translate (to translate idioms and words) or Ludwig (to learn how to put words and expressions into context).

Visual Thesaurus is another great tool for finding synonyms in English, German, Dutch, Italian, French or Spanish. It’s especially useful for language learners because it creates animated, interactive word maps to show you how different synonyms are related.

This is more memorable than a simple list of unfamiliar words that you get from a traditional thesaurus. You can even get the results displayed in multiple languages!

If you can make the move to regularly exposing yourself to a language’s vocabulary while going about daily tasks, chances are you’ll get them down pat more easily than with a textbook or grammar books.

I first started integrating foreign languages into my day-to-day life using my devices. I changed the display language on my phone, computer, Facebook account and games I sometimes play. I also switched the language I used in my hobbies. For example, I watched YouTube travel vlogs in German.

This can apply to you too. Whether you like watching football games, listening to podcasts, watching TV series or anything in between, you can always do those activities in one of your target languages.

This technique is useful even if you’re only learning one language—applying it to learning five languages is very simple. Just head to your calendar and assign a different language to different weeks or months. Because this learning technique is designed to give you an immersive language experience, it’s advisable to focus on one language for a set period of time.

For example, I recently changed my email and Twitter languages to French, after I’d used them in German for the last six months.

Even though my language learning experience has totally improved important aspects of my life, I should admit that it wasn’t all sunshine and rainbows—especially when I first started out.

Therefore, if you also want to embark on a language learning journey, stay consistent and patient until you reach your target level.

Yassir Sahnoun is a writer, polyglot and content strategist. You can learn more about Yassir at his website.

Raising Bilingual Children: How Any Family Can Get It Right
Motivation Tracker: 5 Tips to Create a Foreign Language Notebook That Keeps You Motivated