Russian Pronouns and How They’re Used: A Beginner-Friendly Guide

Did you know that the third Wednesday of October is International Pronouns Day?

When this started, it got me thinking about gender-neutral pronouns in Russian, such as Оно (it).

I asked my Russian-speaking friends about using this class of pronouns for people, and there was a shocked silence.

This was followed by both nervous gulps and chortles of laughter­—apparently, this is an insult beyond the pale to some.

Your choice of Russian pronouns is extremely important, which is why I’m here to get you started with a thorough guide!

While most sites prefer to categorize the pronouns according to the person and list them by case, I prefer to accumulate all the pronouns within a case. This produces an intuitive order and correlates each case pronoun to its base form.

Here are a few things to look out for before we dive into each case:

The accusative and genitive cases are similar for all pronouns.

When third-person pronouns are used along with prepositions, add the letter н to the pronoun. For example:

This is the basic form from which pronouns and nouns are introduced before any inflections for case are made.

Они сегодня идут гулять.
They are going out today.

But in other languages, such as Latin and Sanskrit, the genitive is used with a range of prepositions. The best way to identify the genitive case in Russian is by noting the prepositions that mark it. These are:

The most intuitive use of the genitive may be to indicate possession (for example, “my book”), but in Russian, this is done with the possessive pronouns (thus the translation of “my book” is моя книга).

Because the possessive pronouns coincide with the genitive personal pronouns only in the third person, it’s important to take note of this distinction. This difference between possessive and genitive may be a little difficult to grapple with in English, let alone Russian, which is why it’s a frequently asked question among language learners.

У тебя будет встреча?
Do you have a meeting?

Возьмите для меня одно пиво.
Ask for a beer for me.

A quick glance at the pronouns and their translations will tell you that they’re the same as in the genitive case. Examine this in terms of the definitions of each case and it may seem inexplicable, but when you look at examples, the commonality seems more natural.

For instance, the genitive case would be “It came from me.” The accusative would be “He sent me.”

Recall that the dative case is used in a number of common utterances, such as надо (need), нравится (like) and queries about age.

Дай ему яблоко.
Give him an apple. Or, Give an apple to him.

Нам не нравится такая музыка.
We do not like this type of music.

Instrumental Case (as the Means or Instrument)

This is another case whose usage is hard to correlate with a definition in English. Once again, the prepositions that adjoin it are the best indicators of when it should be used. These are:

Пойдем со мной.
Come with me.

Перед нами остановилась машина.
A car stopped in front of us.

Though this case and its name relates to several prepositions, when used for people, it’s most commonly used with о and its variants об and обо (about).

Иван давно забыл о ней.
Ivan forgot about her a long time ago.

Could there be a self within myself or yourself that relates to all other selves?

The Russian word for self, себя, refers to each, every and all selves.

If we were to talk about people seeing themselves, we would say:

Я вижу себя.
I see myself.

Она видит себя.
She sees herself.

Они видят себя.
They see themselves.

You may be thinking that this is just too easy… and you’d be right. Remember that it has to be declined for each case. Luckily, we’re spared the nominative case because Себя can never be the subject of a sentence.

Давай, пропой мне всё это! (Come on, sing all this for me!)

It may be a while before you can use these pronouns intuitively, but you’re well on your way.

One way to practice your pronouns is to watch Russian videos on FluentU, which include trailers, movie clips and popular vlogs. Each video comes with interactive subtitles, so you can hover on any Russian pronoun that comes up and see what it means in an authentic context: 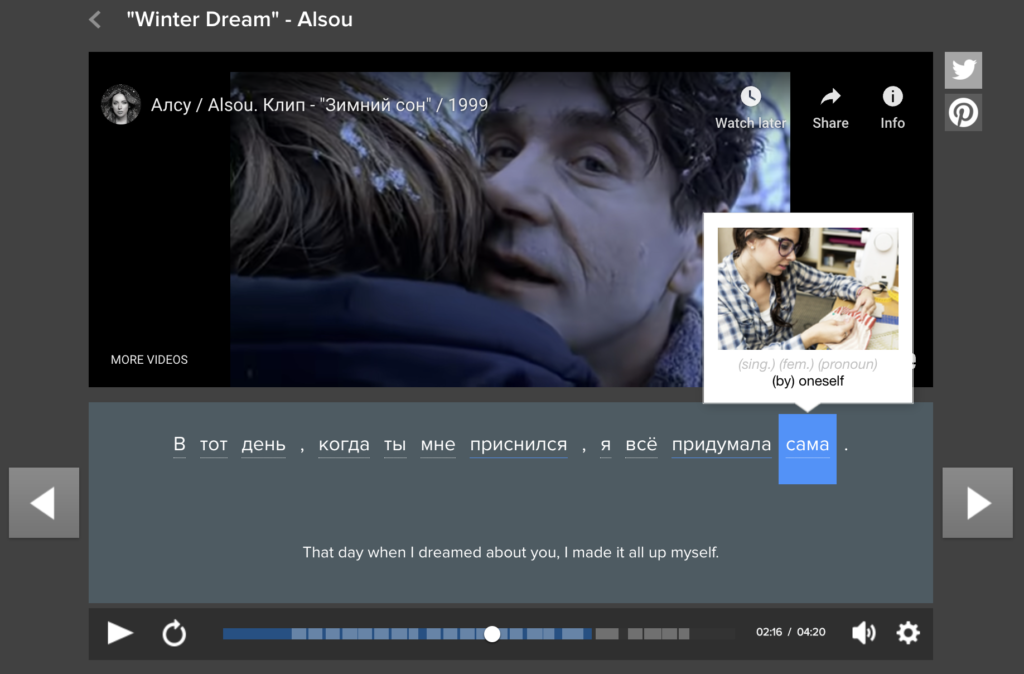 The program also allows you to study pronouns with flashcards and look up video examples.

There’s the poem “Моя грамматика” by М. Раскатов too if you want to enjoy some wit and bask in the glow of your recently acquired pronoun knowledge!