How to Survive Russian Declension: Grammar Rules and Resources for Language Learners

There’s more than one way to skin a cat.

And in Russian, there’s more than one way to spell it, too.

Is the cat male or female? Is it performing an action, or is an action being performed on it? Is someone thinking or talking about the cat? Is there more than one?

The answers to all of these questions will determine how you spell the word. That’s due to Russian declension, which involves the changing of word endings based on many different factors.

It may seem intimidating right now, but we’ll get you comfortable with the rules and prepared to correctly talk about cats and much more in Russian in different contexts.

склонение (declension) is typical in many European languages, especially Russian. It’s a linguistic practice where nouns, pronouns, articles and adjectives are inflected, or modified, based on gender, number and/or case.

Declension is very easy and straightforward in modern English, where nouns are inflected only based on their number (singular or plural) and whether it’s in the plain or possessive form. For example, the only variations of the word cat would be cats, cat’s and cats’.

As noted above, things aren’t as easy in Russian.

At its most basic, Russian declension changes the way the endings of words are spelled. The ending will indicate grammatical case, gender and whether a given word is singular or plural.

There are many overlapping rules for how these changes work. Memorizing them is a difficult undertaking, though important to Russian fluency.

Below, we’ll give you the basics of different Russian declension forms, along with a few (non-exhaustive!) examples.

The resources that follow include comprehensive word change lists and charts that you can use to correctly inflect any Russian noun.

Grammatical case refers to a word’s function in a sentence. In Russian, case can be determined by whether a word is a direct or indirect object or whether something belongs to someone or something else, for example.

Six grammatical cases as shown below determine the last one or two letters of the noun:

Each case form clearly shows the function of the noun in a given sentence—we’ll discuss each one and its impact on declension below.

The nominative case dictates that the noun is the main subject of the verb in the sentence. This noun answers the question “who” or “what” did the action. The ending isn’t changed at all.

Examples of nominative cases of nouns are мальчик (boy) and лодка (boat). Watch how the spelling of these nouns changes in the following cases.

The genitive case indicates possession and implies that something belongs or refers to someone or something else.

For example, in the phrase лодкa мальчика (the boy’s boat), notice how we change the ending of the word “boy” from мальчик to мальчика. This indicates that the boat belongs to the boy.

For sentences in this case, the owner of the object usually follows the object owned.

Nouns used in the dative case signal that they’re the indirect objects of the verb, signifying that something is given or addressed to the object.

So, in the sentence папа дал лодку мальчику (the dad gave a boat to the boy), we would change the ending of the word boy from к to ку.

The accusative case indicates that the noun is the direct object of the action. This can easily be confused with the nominative case, but there’s a clear difference.

In the sentence мальчик взял лодку (the boy took the boat), boy is the subject of the verb, while boat is the object of the verb. Therefore, the ending of the word boat is changed from лодка to лодкy.

Although word placement isn’t always an indicator of cases in Russian, the direct object is typically placed after the verb and focuses on the noun to which a certain action happens—in this case the boat.

In some instances, the instrumental case shows that an instrument was used as a means to carry out an action (think of English sentences where we use “with,” like “cut the butter with a knife”).

However, in Russian, the instrumental case is typically used with the preposition с (with) and there may not be a physical instrument involved at all. An example would be the sentence мальчик играет с другом (the boy is playing with a friend).

This is where things get especially tricky for native English speakers. Russian nouns are gendered, and their inflection in different grammatical Russian cases will also depend on their gender.

You can learn the rules in groups, as demonstrated below.

First declensions consists mostly of feminine nouns as well as masculine nouns that end in a or я. Examples of these words are мама (mom), девочка (girl), папа (dad) and дядя (uncle).

Here’s an example of first declension changes for the noun мама (mom):

Here are the changes for an я-ending word, буря (storm):

Second declension nouns include masculine words with zero endings and neuter words that end in e or o. Examples include cтул (chair) and зеркало (mirror).

Here’s an example of second declension changes for the noun cтул (chair):

In the case of neuter words, the endings would be the same.

However, if a masculine word is a living being, the accusative form becomes different, as with the word брат (brother):

Third declension words include feminine words with a zero ending, such as ночь (night), which changes in the following ways:

Russian declension doesn’t only change word endings based on case and gender, but also whether the word is singular or plural.

These word changes essentially fall into three groups. There are different endings depending on whether there’s just one of the things you’re talking about, two to four of it or five and above. Take a look at the endings in the examples below and you’ll see how this plays out.

One fly in the oil: the numbers “one” and “two” themselves inflect based on gender. You’ll see different spellings for these words in the examples below. Here’s a full rundown on the declension of cardinal numbers for gender and case from Arizona State University.

Once again, it’s important to remember that these are non-exhaustive examples. Spelling changes for any specific word will depend on its gender and how it’s being used in the sentence.

Where to Devour Declension Word Changes

Now that you’ve learned the parameters for Russian declension, it’s time to memorize those nitty-gritty word changes. Fortunately, there are resources available to Russian learners that make it a (mostly) painless experience. Here are some of our favorites!

Got a specific word you need to inflect? Just enter it into the search bar on this super easy-to-use tool, and it’ll show you the word changes depending on case and plurality. You can even enter search words in English and get a Russian translation and declension guide.

If you’re feeling a bit overwhelmed by the number of word changes to remember, FluentU makes it easier by teaching you Russian in real-world contexts. Learning Russian grammar naturally in this immersive environment is, for most learners, much more effective than rote memorization of isolated rules.

Each video comes with interactive captions, so you can click any word for an instant definition and native pronunciation. You’ll also see other videos that the word is used in—including specific inflections of nouns—which is perfect for absorbing their grammatical contexts.

FluentU videos are organized by genre and learning level, so it’s easy to find something that works for you. Plus, FluentU provides adaptive quizzes that test you on the material you struggle with, thus creating a more personalized experience.

Check out the free trial to start picking up Russian declension, vocabulary and grammar the entertaining way.

“The Case Book for Russian” 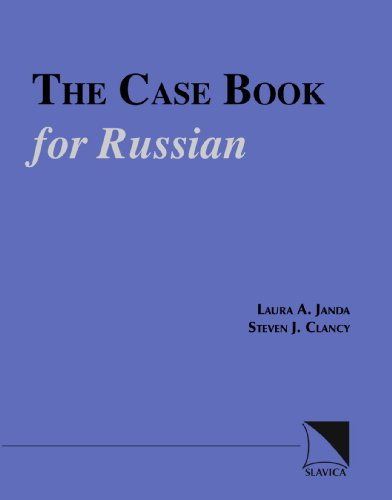 This book organizes the six Russian cases into specific chapters. There are handy tables that provide references to word endings for cases, as well as examples to see how the words are used in actual sentences. Better yet, these example sentences were pulled from authentic Russian prose found in fiction, newspapers and other sources.

The book also features exercises and a CD that allows listeners to hear a native Russian speaker pronounce the words. 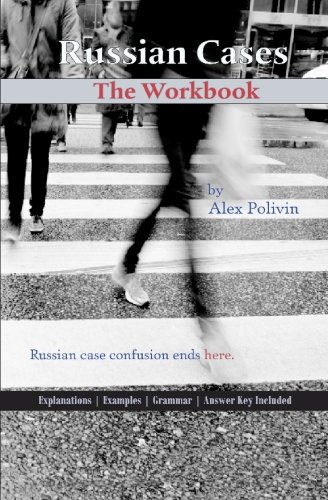 This is a book for Russian learners at an upper-beginner or above stage. It’s intended to have you apply your declension knowledge in exercises and drills. This is one of the most practical ways to make sure what you’ve memorized has actually stuck.

The book includes a brief review of the six Russian cases, but focuses on mini tests and a general final exam to help students improve their accuracy. There are of course answer keys for all exercises so you can check your work.

Russian declension isn’t easy, but it’s certainly not impossible to learn. Utilize the rules in this article as well as the additional resources to start this process. If you stumble, don’t give up! You’re not only learning a new language, but you’re also learning new Russian grammar rules that aren’t found in your own native tongue, which is challenging! Just think of how gratifying it’ll be once you’ve perfected the Russian cases!