Russian Numbers in a Nutshell: How to Count From 1 to 10 and Onwards

You may already know that the Russian language can get messy pretty fast, even when it comes to simple things like numbers and colors and so on.

In this post, we’ll go through all the basics of counting and using numbers to specify quantities of things.

You can count on it.

You can practice and test out your skills with this song that covers all the numbers from one to one hundred.

Russian numbers up to 100

Note that the first column of numbers below are made up of numbers from the lists above, as you’d probably expect.

There are a ton more videos on YouTube you can use to practice your Russian numbers until they’re perfect.

This one helps you practice with really simple math problems and visuals.

Getting Specific: Genders and Plurals with Russian Numerals

Serves one to two: inflecting for gender

You may already know that nouns in Russian generally inflect for gender, number and case.

That’s sure a lot, but luckily, gender is easy with numerals. You only have to worry about it at all for two numbers: one and two. It all depends on the gender of the noun you’re pairing them with.

The number one takes three different forms for gender.

Okay, but what does all of this actually mean? Well, consider the following:

Рубль is a masculine noun. As you can see with the examples above, the numbers in front of “ruble” and “rubles” are written out in their masculine form to match.

But, look at what happens here:

Копейка, on the other hand, is a feminine noun. So, instead of using the masculine forms of the numbers “one” and “two” in front of it, we use their feminine forms.

Число is a neuter noun. So, we use the neuter form of “one” and “two.”

In all instances outside of the possibilities displayed above, numbers don’t change for gender at all. They only exist in one form. So, that’s all there is to that!

Table for four but no more: the genitive singular

In Russian, when you’re specifically talking about numbered quantities of something, there are two different types of plurals.

The first kind of plural is only used with numbers two through four, and the other one is used for everything after that (with a few exceptions, such as 22, 43 or 104, for example).

The first type of plural corresponds with the genitive case in the singular.

If you go back to the examples in the last section, all of the second examples are written in this first type of plural: рубля, копейки and числа.

The two nouns above are masculine, and their default masculine singular forms end in consonants.

If a masculine noun ends in a consonant in the singular, all you have to do to put it in the genitive singular is to add -а:

Simple enough, right? That’s no harder than adding “s” to plurals in English.

It does get a little more complicated, though. Of course, it does.

If a neuter noun ends in о, take away the о and add -а:

For feminine nouns ending in ь, you remove ь and add -и:

For feminine nouns ending in а, remove the а and tack on -ы. Unless there’s a guttural like к, г, х or a sibilant like ж or ш at the end, in which case you just add -и again:

That doesn’t cover absolutely everything and there are exceptions, but that’s the gist of it!

The plural for nouns of which you’re specifying five or more is formed using the genitive plural. Here are some of the basic rules of formation.

Many masculine nouns ending in a consonant take -ов in the genitive plural:

If they end in й, they take -ев or -ёв, and the й needs to be removed first:

Now, another thing to know is that some nouns use completely different words for the genitive plural in some contexts, like the word for “years.”

You can use both год and лет when talking about age and amount of years, but it depends on the number you’re talking about. The general rule is:

Above that, the word used is based off the last digit. For example:

You don’t have to remember all of this right away, but having a general idea of it will help you to recognize plurals. And, if you want to cheat, you can always look up the genitive declensions for a noun using Cooljugator.

You can also look at these grammar tables for more information about the genitive plural.

Finally, let’s have a look at ordinals in Russian. Ordinal numbers also have the three genders of masculine, feminine and neuter. Here they are in their masculine form:

You could imagine that the Russian ordinals act like adjectives in that the endings change depending on the gender, number (singular and plural) and case of the noun it’s describing.

It’s important to note that the endings for the word “third” is a bit of an exception. It’s третья in the feminine form, третье in the neuter form and третьи in the plural form.

This would be how the endings of the ordinals would change depending on their case. Here’s an example of the masculine form, первый:

If you’d like to see the declension of each ordinal number in detail, depending on its case and gender, check out this explanation.

Also if you want to see most of the numbers in context, how they would be used in real life, you can have a look at FluentU, a language learning program which uses authentic content to help you learn Russian. 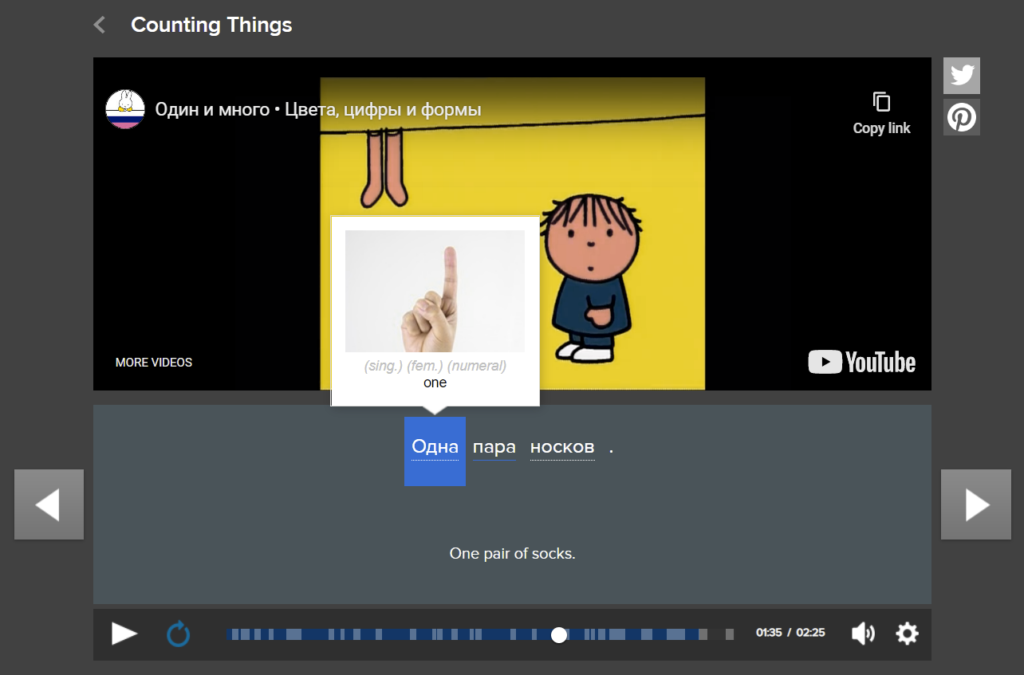 The benefits of such a program are the interactive subtitles, which immediately show you the translation each word. Plus, you have the added features of personalized quizzes, flashcards and much more!

You can also take your studies on the go with you, with the iOS and Android apps.

With all of these tools you should get the hang of Russian numbers in no time, but make sure to practice. In other words, it all adds up and everything counts!