“Good morning mother, how might you be this fine morning?”

Isn’t that how all of us greet our parents in the morning?

If not, surely we speak with our friends by calling them “Mr. Jones” or “Ms. Alexoff,” as in, “Mr. Jones, please pass me the mustard.”

Nah, that doesn’t sound right either!

Speaking formally to friends and family in informal situations simply makes us sound silly (unless we’re role-playing that we’re in 19th century England, or something like that).

The same can be applied when you’re speaking in Russian. Using overly formal language can make you sound funny or fussy—or at least a little less fluent.

Unfortunately, most Russian learners are only exposed to formal language when they start out, and it takes some extra energy and practice to loosen up those language skills. But we’re here to help.

Below, we’ve got essential practice tools, grammar tips and common phrases to help you instantly informal-ize your Russian.

Why Focus on Informal Russian?

Informal Russian is the everyday language you’d hear spoken on the streets in Russia. If you’re planning to visit Russia, you’ll need it for daily interactions and connecting with native speakers.

Informal Russian will also help you sound more like a native than you would with a formal and rigid tone, which can make it clear that you’re a foreigner.

But informal Russian is also important even if you don’t have a trip planned. If you want to truly understand and enjoy contemporary Russian culture, like movies, TV or internet-speak, you’ll need to grasp the nuances of informal Russian. You’ll get a clearer understanding of the slang terms, idioms and expressions that make the Russian language colorful.

Where to Practice Informal Russian

“Russian Slang: Learn to Sound Like a Real Russian in a Week!” 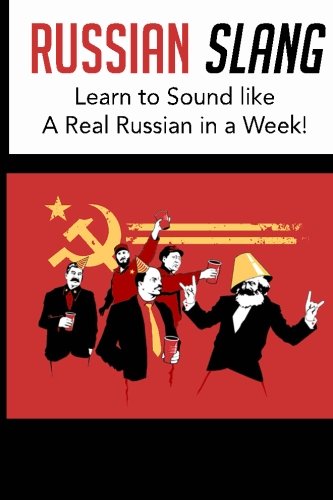 The reason this book promises to make you sound like a real Russian is because it teaches you the slang that you wouldn’t find in most textbooks. Although your American accent might give you away if you try to say these terms out loud, you can surely pass for a Russian should you type them online! Try it in a Russian Facebook group to test this theory out!

The book consists of three chapters, focusing on greetings, exclamations and rude words and other individual slang words.

You’ll get the Russian word spelled out alongside a brief paragraph explaining its correct usage with examples included.

The Quick and Dirty Guide to Informal Russian

Russian is a rich language and there are usually multiple ways of expressing yourself in a fun and informal way. You can play around with different ways of saying things or changing word endings to make them more friendly.

Below, we’ll show you five examples of common informal Russian terms you can use in everyday conversations. But first, you’ll need to get an important informal grammar rule under your belt:

Addressing Others Informally in Russian

If you’re familiar with the difference between tu and usted in Spanish, you’ll have no problem with understanding the differences between ты and Bы in Russian.

Essentially, these are the two different ways to address someone as “you” in Russian. Tы is a casual way of saying “you,” such as when speaking to a friend or a child (similar to tu in Spanish).

Bы, similar to usted in Spanish, is a formal way of saying “you.” This term is used when you want to show respect to the other person and is utilized when speaking to older people, strangers, your boss, etc. Most Russians even use Bы when speaking to some family members, such as aunts and uncles.

Tы хочешь есть? (Informal way of asking, “Do you want to eat?”)

The formal way of asking the same thing would be, “Вы хотите есть?”

Notice that the ending of the word хочешь (to want) was changed from чешь to тите in the formal sentence, as verb endings also fluctuate depending on the pronoun use.

Now that you know how to address Russians informally, here are some informal terms and expressions you can mix into your vocabulary!

This is an informal way of saying hello. If you wanted to say it formally, you’d say, “Здравствуйте.”

Another informal term for “hello” is Приветик, a diminutive form of привет. You would say this to someone you know really well, not a stranger on the street.

This is equivalent to asking someone, “how are things?” “how’s it going?” or “what’s up?”

You can switch the ending of the word дела to ask in a more playful tone, “Как делишки?” It’s something you might say if you ran into an old friend on the street.

Another informal way of asking “how are you” in Russian is, “Как жизнь молодая?” This is literally translated to “how is young life,” but means “how are you?”

Чем ты занимаешься? (What are you doing?)

A formal way of saying this would be, “Чем Вы занимаетесь?”

You might use this over the phone or over text, when you want to ask someone what they’re up to. You might also use this phrase if you wanted to check whether someone’s free before asking them to do something.

Another fun way of saying this is, “что ты делаешь?” which also means, “what are you doing?”

This was appropriated from the English word “super” and adopted into Russian.

However, there are tons of ways of saying something or someone is “good” in Russian. These include:

This could be used as a word to describe something that’s cool or awesome. If you told someone you got them a free ticket to the movies, they might answer, “Отлично!”

For example, you can say, “Как классно, что мы встретились,” which means, “It’s so good that we met.”

This is the same as saying something is “the bomb!” in English. For example, “Это печенье просто бомба!” (“This cookie is the bomb!”)

Давай is slang term to say “bye.” It literally means “to give,” but is also used as a way to end a conversation.

Thus, you can use this term in the following two ways:

Let’s say someone asks whether you want some candy. You could answer, “Давай.” In this case, it would mean “give it to me.”

Or, as the slang term discussed above, you can end a conversation by saying, “Давай, до завтра.” (“Bye, until tomorrow”).

Another informal way to say “bye” is “Пока.” A formal way of saying goodbye would be “До свидания,” which literally means, “until the next meeting.” But informally, you’d just tell someone “Пока” when hanging up the phone or parting ways.

The process of learning a foreign language isn’t always a piece of cake. However, you can make it fun by learning informal sayings, slang terms and even bad words to mix it up with the more complicated and serious parts of learning Russian, like verb tenses and cases.

So Давай for now. Go and learn!