Want to learn Russian while immersing yourself in the Christmas spirit?

A New Year’s tree you ask? Who puts up a tree for New Year’s?

While Russians celebrate both Christmas and New Year’s, they do it quite differently.

Want to know more? Learn a little more about Christmas in Russia while getting in the holiday spirit with some Russian Christmas cartoons!

We already know that Russian cartoons are fantastic learning tools and a great way to hear vocabulary words in context. They can also be a breath of fresh air to an already intense study routine. We could all use some lighthearted learning!

With the cartoons we showcase in this post, you can learn more about Russian culture as you understand better how the holidays are celebrated.

The cartoons are made for children, therefore the language is easy to understand and the words aren’t as difficult as the ones in movies for adults.

Also, they’re free, adorable, fun and will definitely put you in a festive mood!

The Fusion of Christmas and New Year’s in Russia

Although they’re two different holidays, Russian Christmas and New Year’s have sort of fused together when it comes to traditions.

New Year’s is a combination of the American Christmas and New Year’s traditions (Santa, tree, countdown to midnight), except there’s no religious aspect and it has nothing to do with Jesus Christ.

Remember that religion was completely outlawed during Communism in Russia, and, therefore, the secular New Year was celebrated by all, while Christmas only by some.

For example, akin to Santa, Дед Мороз (Father Frost) comes on New Year’s Eve to leave presents for children under the tree.

Рождество (Russian Christmas) is celebrated on January 7th and honors the birth of Christ. However, there is no Santa involved.

Now that you know a little bit about the backstory of both Russian Christmas and New Year’s, you’ll understand why many of the Russian cartoons about the holidays focus on New Year’s (as seen below).

7 of the Best Russian Christmas and New Year’s Cartoons

Below are seven of the best hand-picked Russian holiday cartoons. Note that most of them are 50 to 60 years old, which means that multiple generations of Russians have enjoyed them for decades, and now you can too! 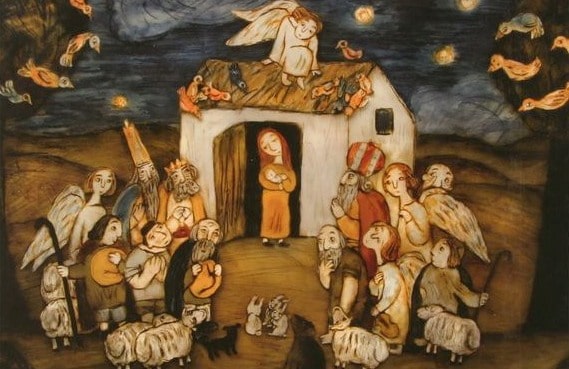 This is a 13-minute, animated Russian Christmas film that was made by Mikhail Aldashin and Zoya Trofimova in 1996.

The cartoon opens with a scene of Mary working outside. An angel then comes and tells Mary that she’ll have a son with Joseph. The story continues to unfold until we find Mary and Joseph in Bethlehem and needing to find a place to sleep. Out of options, they find space in a barn, and she gives birth there.

The Three Wise Men are represented by three wolves, who follow a shining star to find Jesus and offer him gifts. The angel tells all the living things, including animals and birds, shepherds and fishermen about the birth, and they all visit the baby Jesus as well. 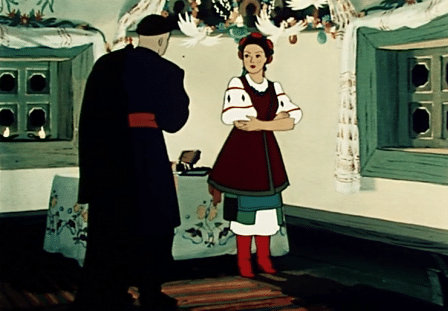 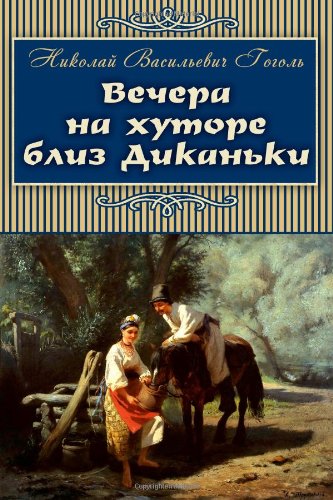 This 46-minute cartoon was made in 1951 by producers Zinaida and Valentina Brumberg, based on the book by famed Russian author Nikolai Gogol, “Вечера на хуторе близ Диканьки” (“Evenings on the Farm Near Dykanka”), written in the 1830s.

Oksana agrees to marry Vakula under one condition, if he brings her gold leather shoes like the queen has. During that time, Oksana falls in love with him and understands that she sent him on a dangerous mission where he may face death.

However, as it’s the night before Christmas, it’s a magical night full of surprises! 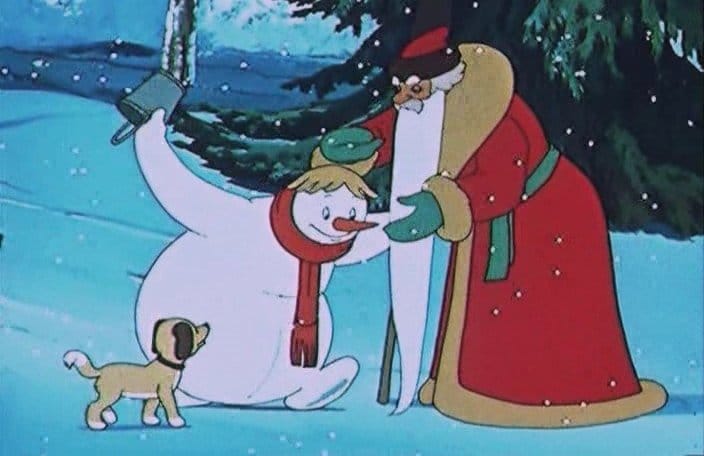 In this 1955 classic, several children write to Father Frost asking him to send them a tree so that they can celebrate New Year’s Eve.

After writing the letter, they build a snowman so that he can bring the letter to the magical forest. The snowman comes alive at midnight on the eve of the New Year and together with a little puppy, Дружок (Friend), goes to search for Father Frost.

The animals in the forest try to take the letter away from him. However, with the help of a friendly bear, the snowman is able to fulfill the children’s wish. 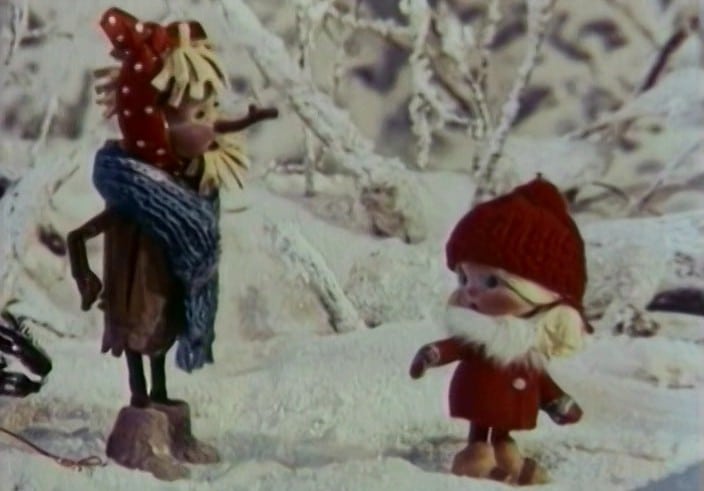 This is a favorite holiday cartoon about Чудище-Снежище (Snow Monster), who guards the forest. He can’t get any rest because of all the visitors to the forest who have come to chop down the trees.

However, he becomes friends with a little girl and helps her deliver a tree to her school to celebrate the New Year.

The cartoon also features beloved holiday music that many Russians have come to know and love. 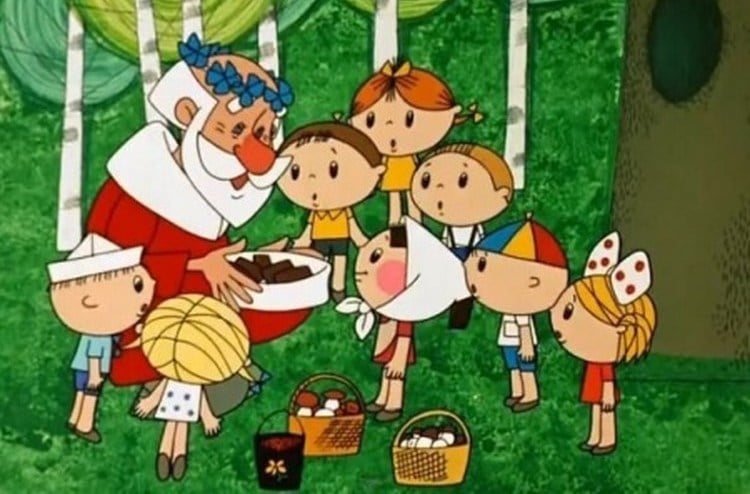 Another holiday classic, this cartoon from 1969 tells the story of how Father Frost wanted to learn what summer was. Upon delivering presents on New Year’s Eve to a daycare, he asked the little children about summer. They tried to explain what the season was all about, but didn’t do a good job.

Father Frost went back to his workshop, confused, and painted all of the tree ornaments green and started singing strange songs about summer. He even has nightmares where he pictures himself being ridiculed because of his lack of knowledge about seasons.

In the summertime, he decides to venture out and see summer in all of its glory, but the hot weather makes him ill. The children figure out a great solution, feeding him ice cream to cool him down and allowing him to experience this great season all for himself.

You can watch this video with Russian and English captions on FluentU!

The captions provided by FluentU for all its videos are completely interactive, plus you can download the full transcript in both languages and play fun games to actively learn all the vocabulary in the video.

Note: Although this clip is no longer available, you can still watch this cartoon of Father Frost experiencing the summer season for the first time. 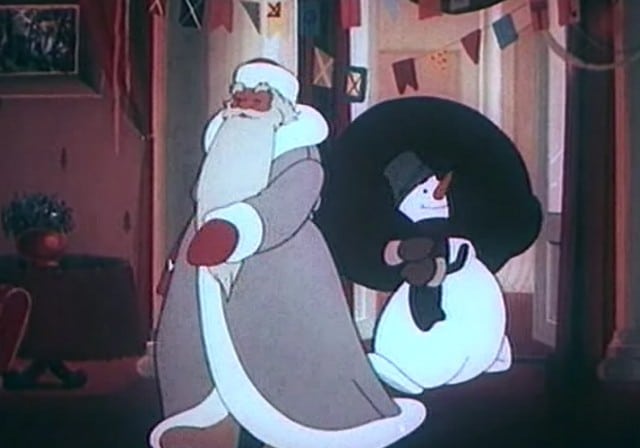 Made in 1950, this adorable cartoon features Father Frost and Snowman, who are running to deliver presents to kids at their daycare. Along the way, they lose two toys—a bunny for a girl named Lucy, and a stuffed teddy bear for her brother, Vanya.

The toys end up lost in the forest, and through a series of many adventures, find their way to Снегурочкa (The Snow Maiden), who hurries to deliver the toys to the siblings just in time. 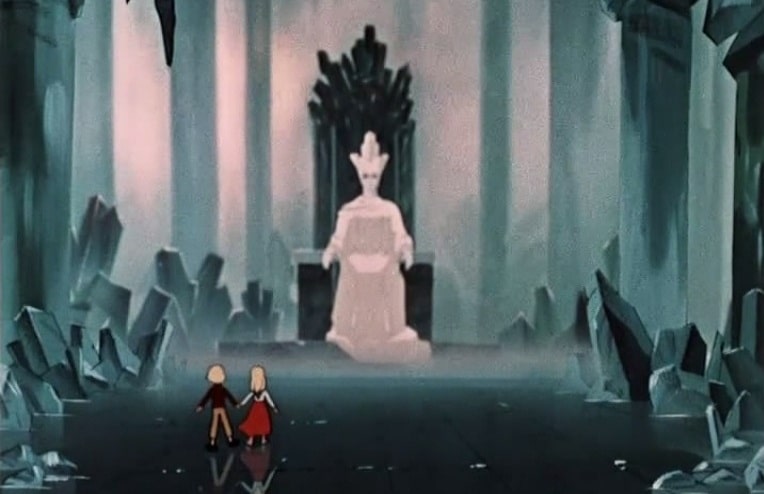 This one-hour cartoon is based on the book by Danish author Hans Christian Andersen written in 1844 and was made in 1957 by Yevgeny Schwarz. It’s become one of the most famous Russian cartoons since that time.

This is the story of two children named Kai and Gerda. When Kai gets kidnapped by the mean Snow Queen and taken to her ice castle to live forever, Gerda sets out to save him. This cartoon focuses on the struggle between good and evil and is one that many Russian children watch during the holiday season.

Give yourself the gift of an expanding vocabulary this holiday season!

Pay close attention to words that describe the holidays, characters that come into play during this time (Father Frost, Snowman, etc.) and words that pertain to the weather (snow, wind, cold)!