Toon Time: 8 Adorable Cartoons to Level Up Your Russian Learning

It makes you adopt kittens. It makes you stare at photos of baby animals for hours on end. But can it also help you learn Russian?

Through the power of cartoons, the most adorable form of entertainment, you can improve your Russian skills while still gasping at the sheer cuteness.

So if you want to learn Russian, give these great cartoons a try.

Why Use Cartoons to Learn Russian?

Russian cartoons are very entertaining. Like Russian movies and television, cartoons offer entertaining plots to keep you engaged. Being entertained is the best way to learn Russian—after all, if you’re enjoying the learning process, you’re much more likely to keep coming back and improving your skills!

Additionally, cartoons are less intimidating than other forms of media. Since cartoons offer plenty of context clues and are usually fairly brief, approaching them is less daunting than diving into a feature-length movie or a novel. It feels more like playing a fun game than actually studying. 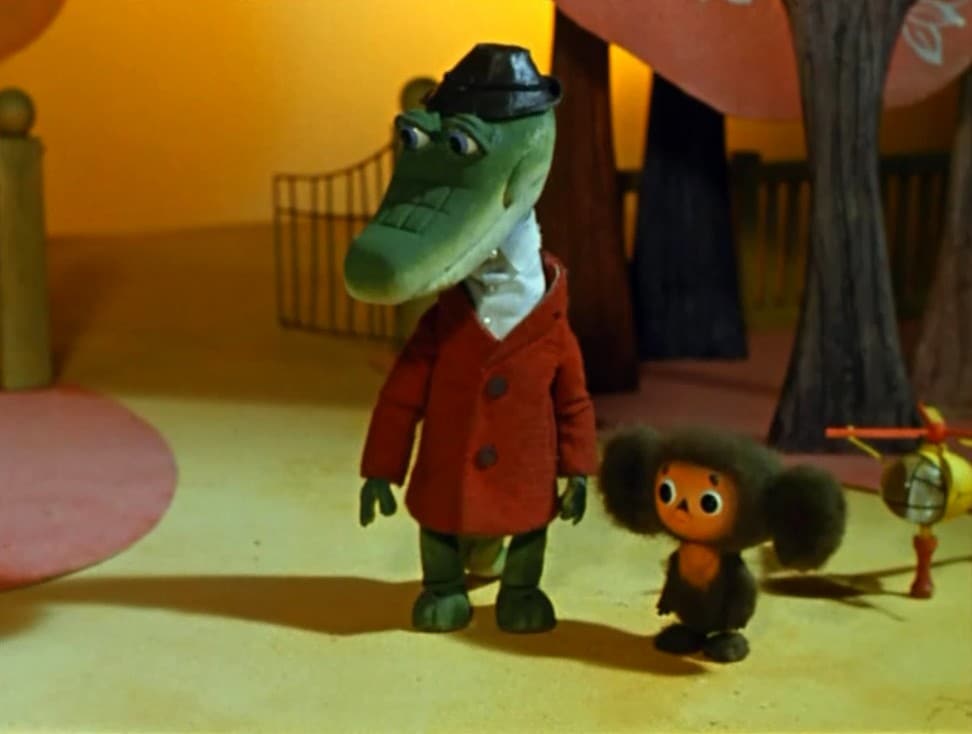 “Cheburashka” is the name of the adorable character who starred in several animated films (including “Gena the Crocodile,” “Cheburashka” and “Shapoklyak”). He rose to popularity in the late 1960s, but he’s still beloved to this day.

Cheburashka is a bit of an oddball. Described as an “animal unknown to science,” he looks like a sort of cross between a bear and a monkey. He inadvertently arrives in a crate at a store in Russia where he doesn’t quite fit in.

Cheburashka is a huge star internationally, particularly in Japan. Regardless, anyone with an eye for cuteness can’t help but fall in love with the little fellow.

“Cheburashka” is a classic, so it’s great for any Russian student. Beginning students will find it particularly useful, though, because this video has English subtitles to help you along. Additionally, there’s a lot of written text, so you can practice your reading as well. Furthermore, there isn’t a lot of dialogue so you’ll have plenty of time to translate in your head if you need to.

Tip: You can find “Cheburashka,” some other cartoons from this list and even more Russian-language cartoons on FluentU. 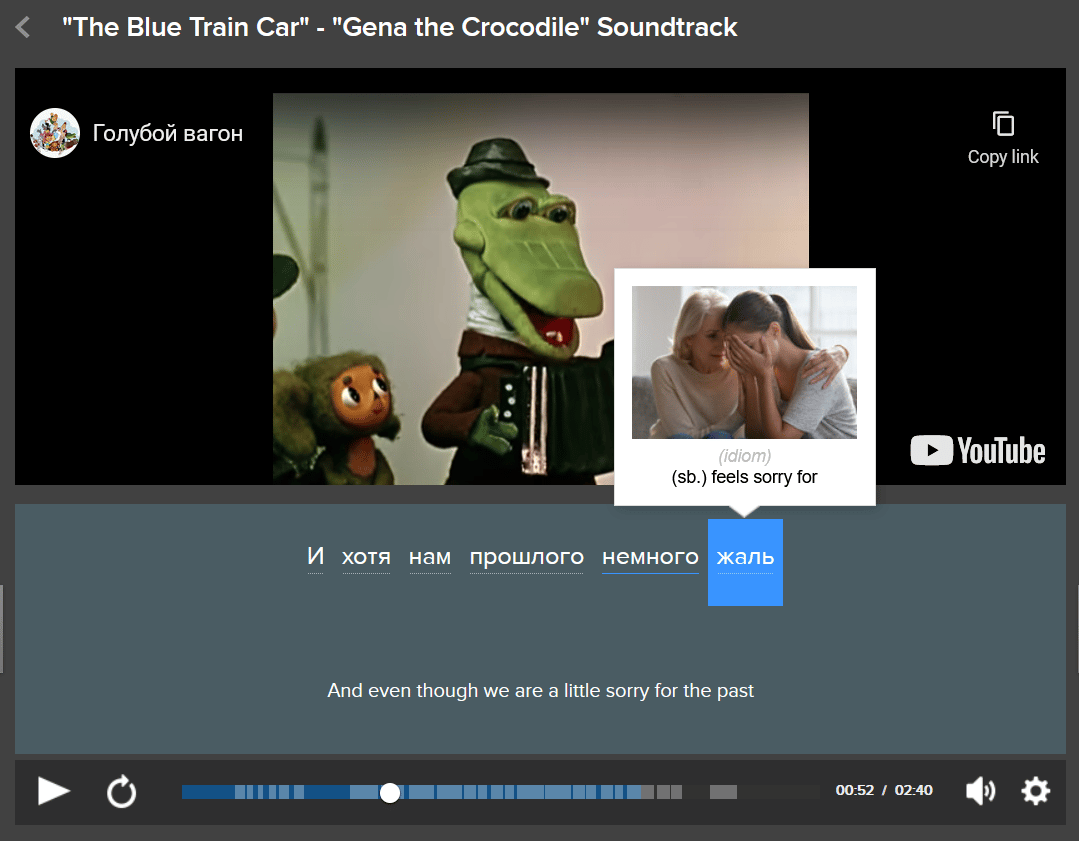 FluentU has many other types of https://link.fluentu.com/e0qauthentic Russian content, like movie trailers, commercials, vlogs and more. You can take advantage of the bilingual interactive captions, customized quizzes, multimedia flashcards and other tools meant to make native content approachable for learners. 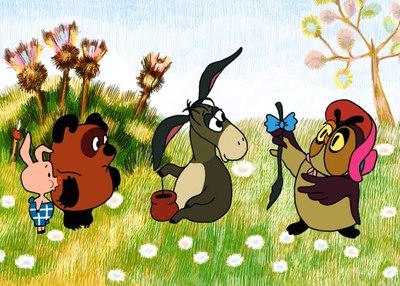 You might think of Disney’s big yellow/orange bear when you picture “Winnie the Pooh.” However, the American Pooh doesn’t have a monopoly on the Pooh industry. Let us introduce you to Vinni Pukh, the Russian equivalent of Winnie the Pooh.

Vinni Pukh is rounder, browner and looks decidedly more bear-like. He became popular in the late 1960s and early 1970s. He’s so popular to this day that he even has his own BuzzFeed list.

What’s more, he’s more than willing to help you learn Russian. In the cartoons linked above, there are helpful English subtitles so even beginning speakers will be able to follow. However, there’s more dialogue here than in some other cartoons and the rate of speech is fairly rapid, so this cartoon is ideal for intermediate speakers. 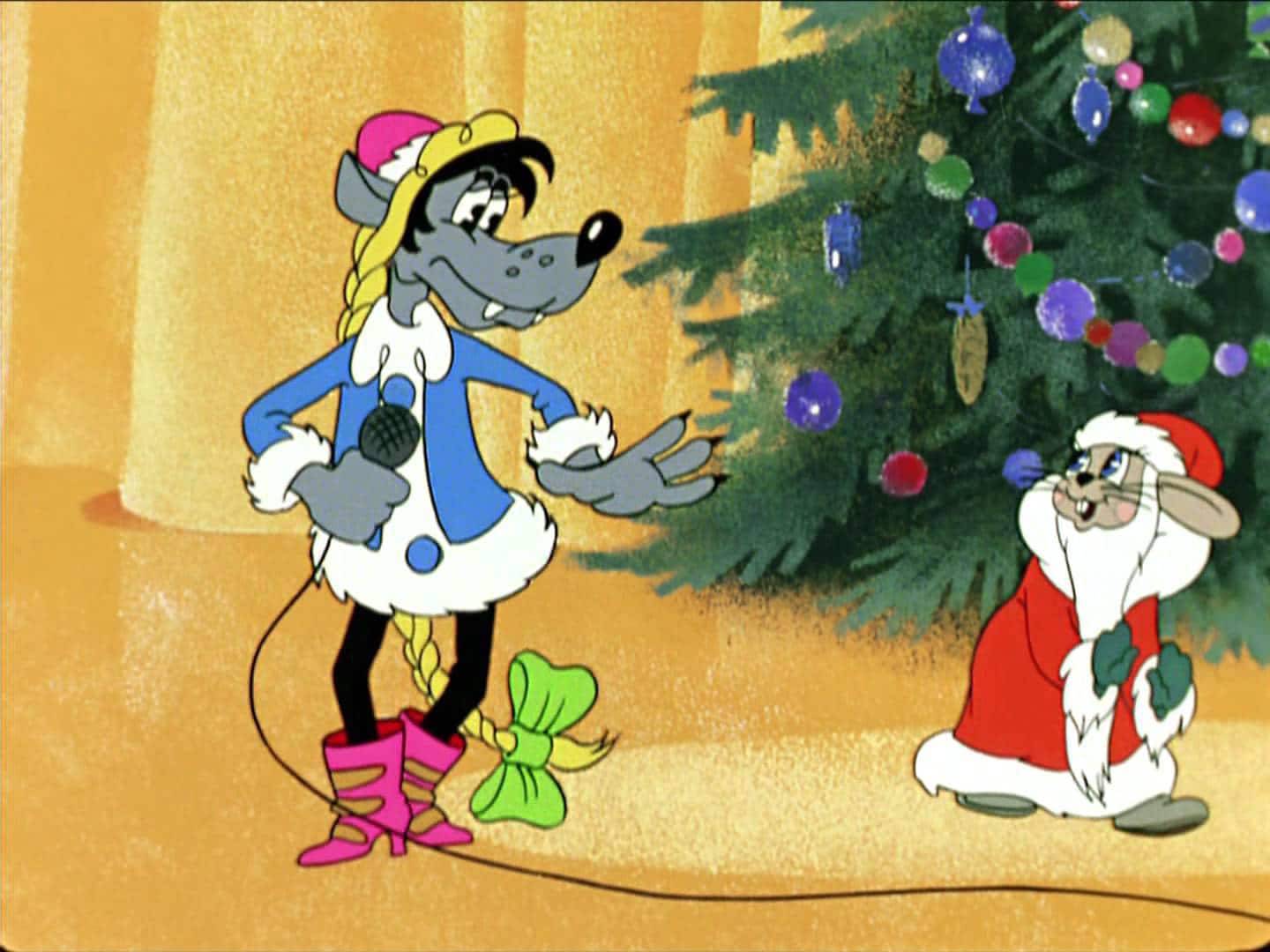 “Well, Just You Wait!” is a series that debuted in 1969. New episodes have debuted as recently as 2006. It follows a wolf trying to catch a rabbit, so it may remind American viewers of “Wile E. Coyote” or “Tom and Jerry.”

This cartoon relies almost entirely on entertaining animation. Most of the Russian language that you’ll encounter will be in the credits. Therefore, this is great for very beginning students to see written Russian, enjoy Russian music and familiarize themselves with a classic Russian cartoon. 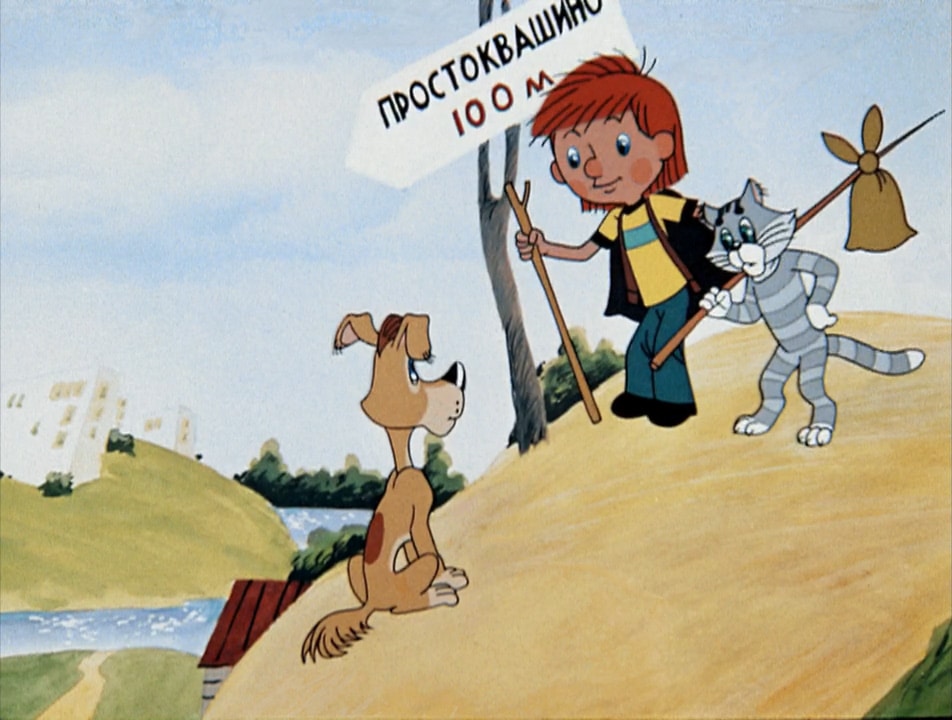 This 1978 animated film follows a six-year-old who leaves home when his parents don’t allow him to keep his talking cat (a logical reaction). Together with a dog, they ultimately set up a home in the country.

Along with other films in this series, “Three from Prostokvashino” is very popular and quotable.

“Three from Prostokvashino” is a great viewing option for intermediate and advanced Russian learners. This video doesn’t offer captions, so you’ll have to rely on your ears. Still, the spoken Russian is slow, clear and generally uses very common words, so this is a helpful tool to reinforce your language skills. 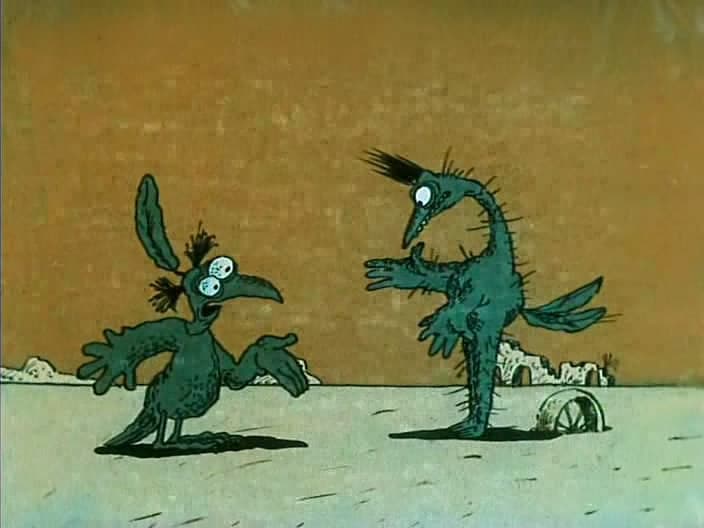 “Wings, Legs and Tails” (sometimes called “Wings, Feet and Tails”) is an animated short from 1986. It follows a bird trying to teach an ostrich to fly.

“Wings, Legs and Tails” is a good choice for beginning and intermediate learners. While there’s no subtitling, the video isn’t very dialogue-heavy and the dialogue is relatively slow and clear. Additionally, this cartoon is short, so it’s easy to watch and rewatch. 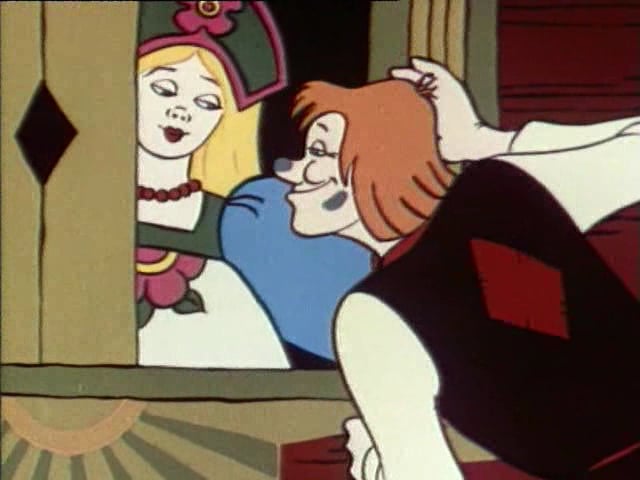 This short musical film from 1979 is based on Russian folktales, so it’s a nice way to learn about both Russian culture and the Russian language simultaneously.

“The Flying Ship” is a great option for any level of language learner. Beginners might not catch every word, but the music makes it very easy to enjoy even if you don’t understand everything.

Listening to the language will ultimately improve your pronunciation and your ability to distinguish between sounds. Intermediate and advanced speakers will be able to appreciate “The Flying Ship” more fully. 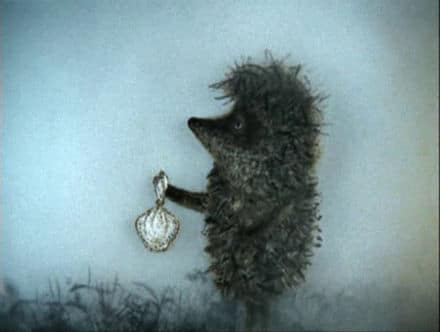 Besides having an incredibly awesome name, “Hedgehog in the Fog” is also an incredibly adorable short film. While it’s from 1975, it feels much more current.

In this film, a hedgehog goes to visit his bear friend, but on the way he encounters thick fog that makes the world around him very frightening.

This particular video offers English subtitles, making it a great choice for any level of Russian student. Dialogue is limited and clear, so picking out words won’t be overly-challenging. 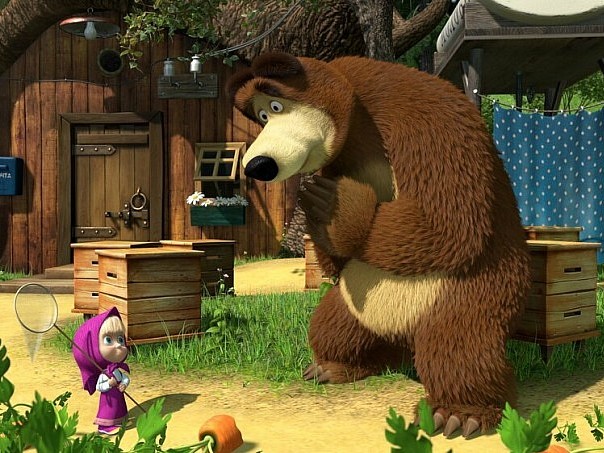 The “Masha and The Bear” series started in 2009 and is still running today. The series is based on Russian folklore. It follows Masha, a mischievous child and her bear friend. While Masha goes on adventures, The Bear accompanies her and tries to avert disasters.

Though Russian in origin, “Masha and The Bear” has since gone international. It’s available in 25 languages and has appeared in 100 countries. You may have also spotted it on Netflix.

This cartoon series is great for any level of Russian learner, but it’s particularly useful for beginners. There isn’t a lot of dialogue, so you won’t be overwhelmed. However, if you’re concerned about not being able to understand what they’re saying, it’s easy to find English-language versions of all the episodes. If you watch these ahead of time, it will be easy to transition to the Russian versions without missing anything.

With so many great options, you can joyously improve your Russian while getting your fill of the most adorable form of entertainment.

And if these eight cartoons aren’t enough, you can also find some great Russian cartoons lurking in online TV websites.