How to Order Food in Russian: 60 Terms to Know

When traveling to a new place, one of the important things to know is how to order food.

Ordering in Russian can seem scary at first. (It was for me!)

One way to get around this is to prepare yourself before you go. With a little practice, you can confidently order food in a Russian restaurant and trust that you’re getting what you want.

Let’s look at 60 different words and phrases to order food in Russian.

Before we jump into the restaurant vocabulary you need to know, it’s important to get familiar with the etiquette and customs of dining out in Russia:

Before you travel to Russia, consider studying the finer points of dining etiquette, especially if you plan on eating at any upscale restaurants. Etiquette Scholar offers helpful country-specific tips.

If you’d like to get a better feel for when to use these words and phrases, or you’re interested in seeing them used in action, check out the popular Russian show Кухня (kitchen). This comedy series is based in a Russian restaurant and deals with all of the hijinks that occur within it.

You can also find podcasts that focus on food and dining. Another option is to use a program like FluentU, which teaches using authentic videos and Russian content, and search for food-related words and videos. FluentU will also help you remember the words through flashcards and quizzes so you can feel confident using them when the occasion arises.

60 Words and Phrases to Order Food in Russian

Hungry yet? Here are the words and phrases to learn for navigating a Russian restaurant, ordering food and interacting with the waitstaff and other guests. 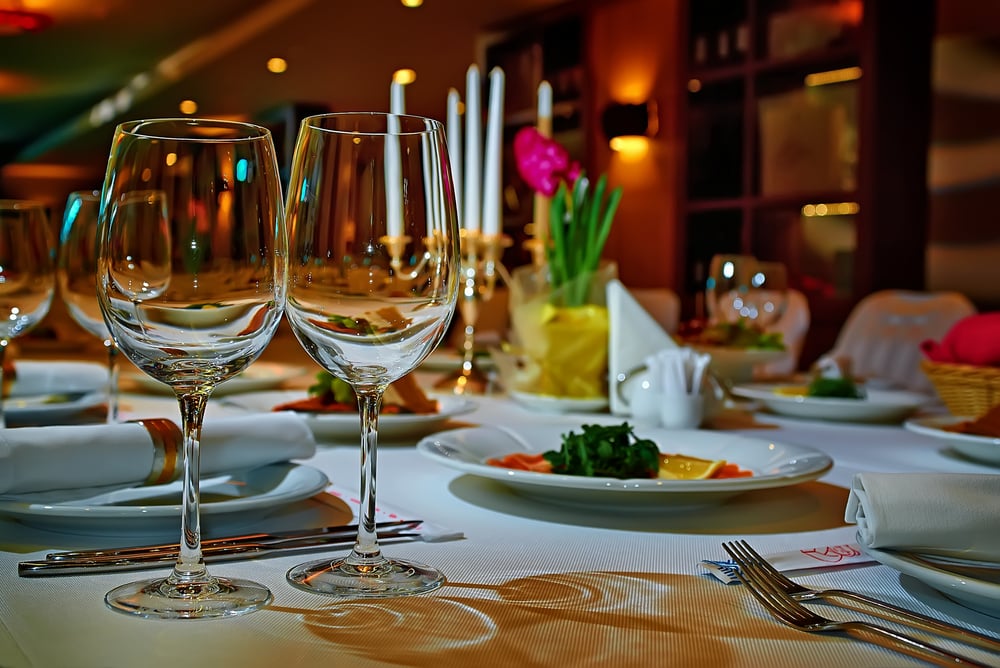 Talking to Your Waiter 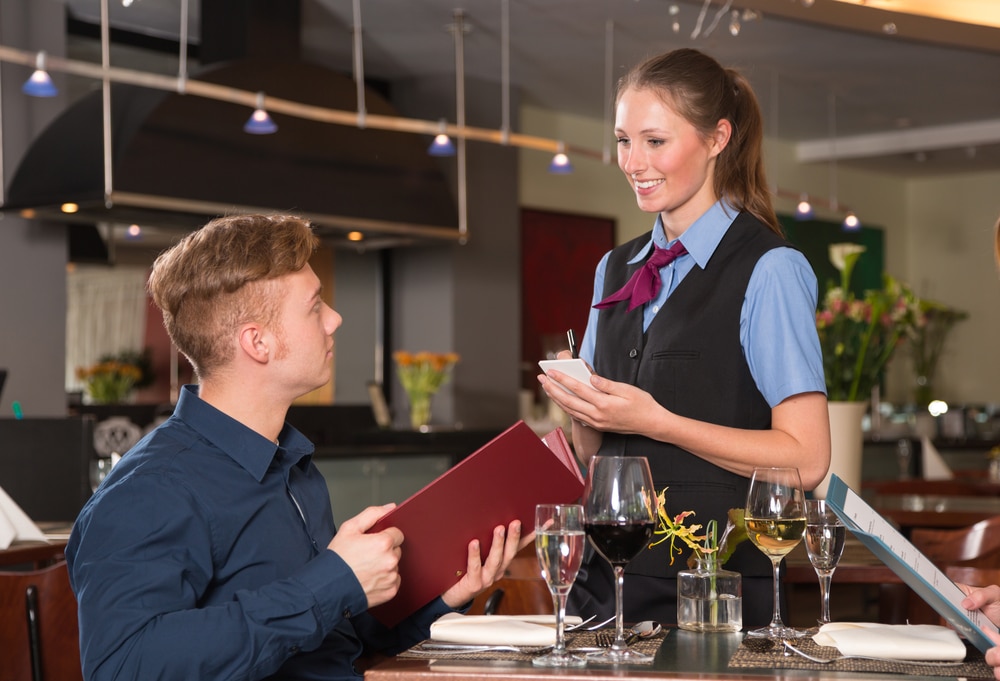 What do you want? — Что вы хотите?

What would you like to order? — Что вы будете заказывать?

What do you recommend? — Что вы посоветуете?

How much does it cost? — Сколько стоит? 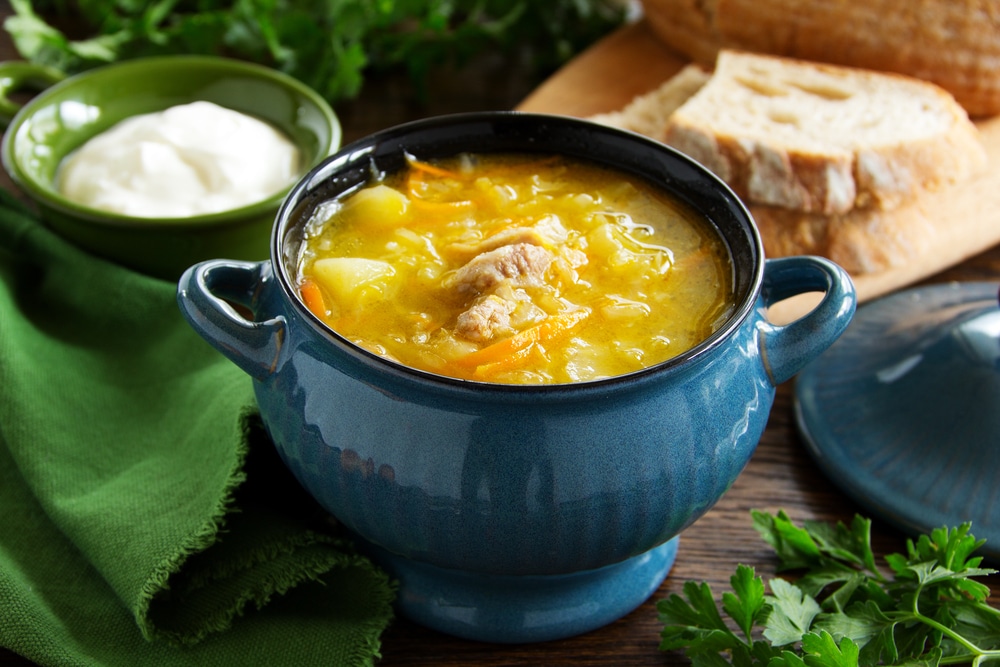 Traditional Russian foods may seem unfamiliar to Americans. Studying Russian cuisine before traveling to Russia will help ensure that you always find something pleasing to your palate. You might read a book like “Russian Food and Regional Cuisine” or “Russian Cuisine: Traditional and Contemporary Home Cooking.”

In the U.S., kasha is most often associated with buckwheat. However, in Russia, Kasha can refer to a porridge made of any grain. Kasha is a popular national dish in Russia. It’s also versatile—it can be sweet or savory, and it can be consumed at any time of day.

Soup is extremely popular in Russia. You’ll find countless varieties of both hot and cold soups.

While it may not be familiar to Americans, schchi is one of the most popular soups in Russia. It’s a cabbage-based soup that Russians have enjoyed for more than 1,000 years. It usually contains cabbage, meat, a selection of vegetables and spices.

Perhaps the most well-known Russian soup, borscht most likely actually originated in Ukraine. Still, it has long been popular in Russia. While it’s most known as a beet soup, other varieties do exist.

For instance, green borscht features sorrel. Additionally, borscht may be served hot or cold and sometimes has meat.

Blini are thin pancakes. They come with a huge and diverse array of toppings to suit any palate. You may find sweet blini with toppings like jam and honey. More savory varieties may contain caviar, mashed potato or meat, as seen in the main image at the top of this post.

Herring is eaten in various preparations, including pickled or in salads. One popular salad is селёдка под шубой (herring under a fur coat), which also goes by the English name “dressed herring.” This dish features pickled herring, onion, mayonnaise and cooked vegetables like potatoes and beets.

Beef stroganoff originated in Russia in the mid-1800s. Since then, it has become popular internationally. While variations exist, it usually contains egg noodles, beef, mushrooms, onion and sour cream.

Cabbage rolls are popular throughout much of Asia, the Middle East and Europe, so it should come as no surprise that they’re also common in Russia. Russian cabbage rolls usually contain mincemeat and a grain like rice or buckwheat. The sauce usually contains tomato sauce and sour cream.

Russia is well-known for its caviar, which is a salty fish egg delicacy. Russian caviar is considered some of the finest in the world and is popular internationally.

Bread is a staple of the Russian table, and rye bread (also called “black bread”) is particularly popular. Sharing bread signifies friendship, and in the past Russians used to welcome guests with salt and rye bread.

The popularity of rye bread began because it was less expensive and more nutritious than wheat bread, but rye bread quickly became a force in Russian culture.

Russians love their mayonnaise-based salads. Olivier salad is a popular option that was invented by a Belgian cook working at a Moscow restaurant in the 1800s.

A wide variety of cakes are popular in Russia, and to snag one, you just need the password and some rubles. And that password is… торт!

If you’re a cake fan, you might also want to look at Understand Russia’s guide to cakes. 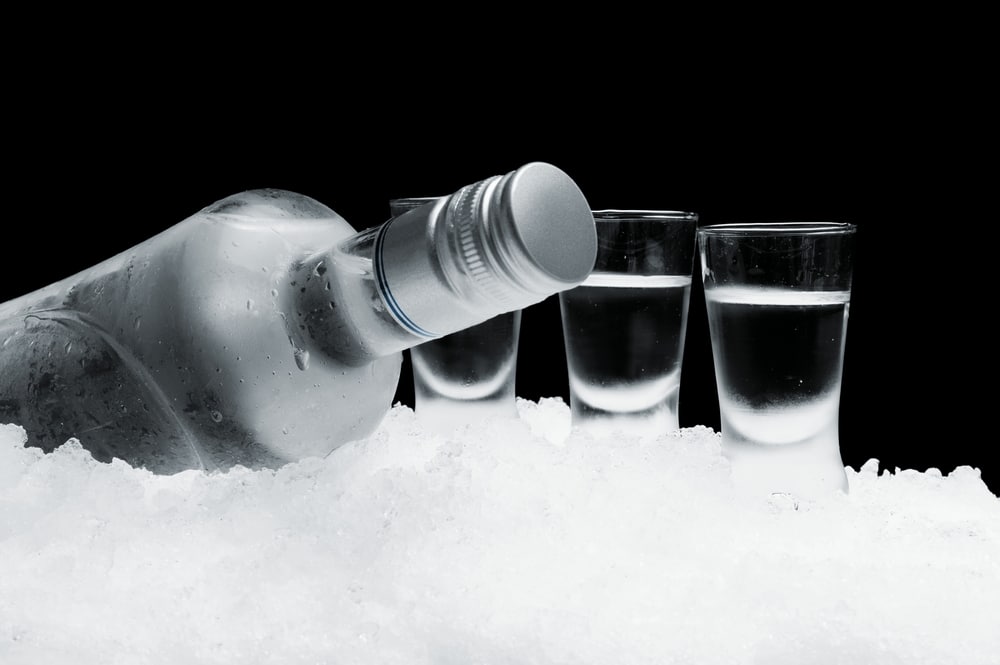 It goes without saying that vodka is popular in Russia. The very name is the diminutive for “water,” which says a lot.

If you go to Russia, there’s a strong chance that someone (or some people) will expect you to drink vodka. If you don’t want to, have a good excuse ready. If you do want to, don’t try to out-drink Russians. Pace yourself and be sure to snack while you drink.

Tea, introduced in the 1600s, is also quite popular in Russia and is often associated with national identity.

The idea of what is and isn’t included in a vegetarian diet is likely to vary, so you may also want to compose a list of what you can’t eat. If you want to play it safe, you might also look into which restaurants are vegetarian friendly at Happy Cow.

Like vegetarianism, the idea of what’s included in a vegan diet may not be consistent. Printing a list of excluded items can be helpful.

Wheat is widely used in Russian cooking, but you can still find some gluten-free options like potatoes, meat and some salads.

I have an allergy to… — У меня аллергия на…

This saying is used before meals.

For your health and prosperity! — За ваше здоровье и благополучие!

These 60 words and phrases are a great starter course in your Russian dining adventure.

Use them in good health!