While Korean grammar and alphabet are completely different than in English—here’s some really some good news—conjugating verbs in Korean is much easier than in many other languages.

In Korean, you don’t have to worry about conjugating into the first person, second person and third person.

All you need to learn are the three levels of formality and the four tenses I’ll describe below.

What to Know About the Subject, the Infinitive and the Formalities

Unlike the Romance languages, in Korean, you don’t have to consider the subject of the sentence when conjugating verbs.

However, in Korean, the verb stays the same in both cases.

An infinitive is another name for a verb when it’s unconjugated.

In English, we write the infinitive as “to + verb.”

To conjugate a Korean verb, the first step is to separate the verb stem from the 다 ending.

One aspect of Korean that’s different from English is that you need to consider formality when speaking. You need to add honorifics to certain words and change the way you conjugate verbs.

Here’s a quick breakdown of the three primary levels of formality:

1. Casual formality is used with people younger than you and with close friends.

2. Polite low formality is used in most everyday situations, and with people you’re unacquainted with.

3. Polite high formality is used in public service announcements and when talking to people with a higher social status than you (i.e., your boss).

Now that you know with whom each formality is used, let’s look at the four most common tenses used in Korean. The majority of verbs will keep their original stem spelling when conjugated. However, some verbs may change their spelling slightly when conjugated.

We’ll focus primarily on verbs without irregularities in their conjugation since this is a beginner’s guide.

If you ever come across a verb you don’t know how to conjugate, you can always resort to using the Verbix conjugation tool.

You can also check out conjugations in use on FluentU. In this language learning program, you can watch authentic Korean videos like movie clips, music videos and news segments. These videos have interactive subtitles that let you check the meaning of any word as the video plays. Words can also be added as flashcards and reviewed through personalized quizzes.

By watching videos on FluentU, see and hear how verbs are conjugated in action and in real-life scenarios. And since definitions are contextual, you’ll see exactly which conjugation of a word is being applied. 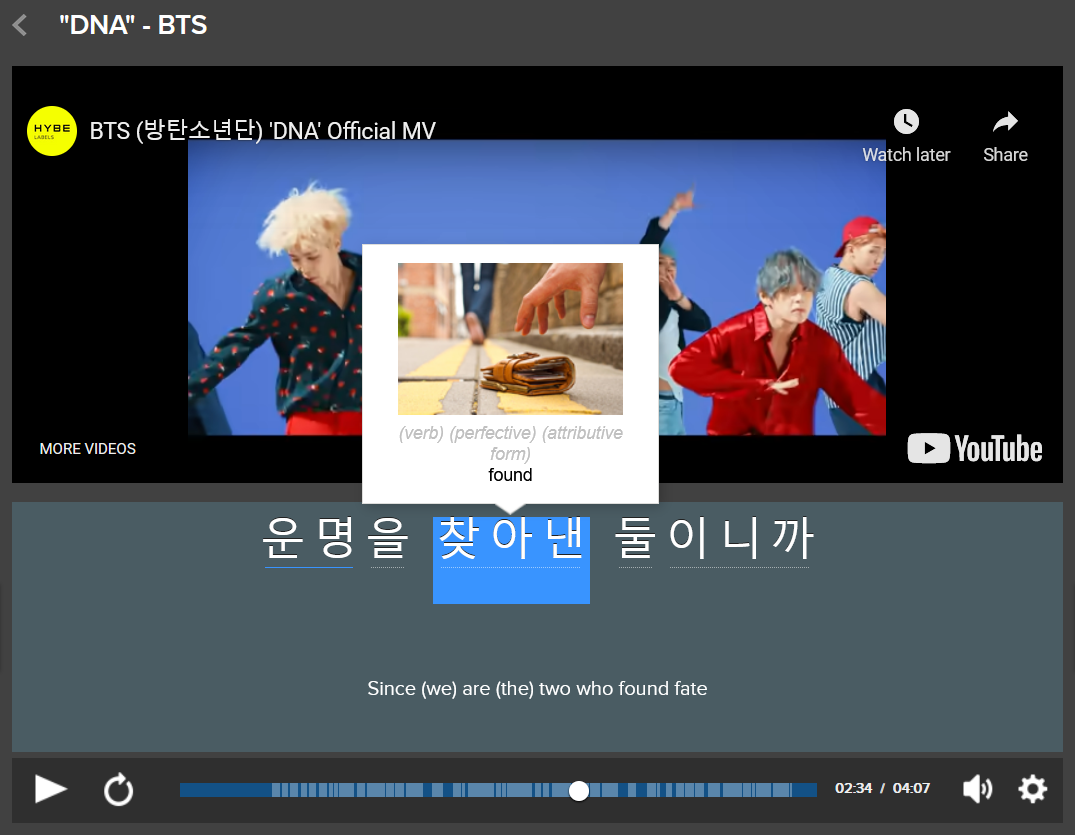 Conjugating verbs in the present tense in Korean is easy!

All you have to do is drop the 다 ending on the verb stem and add the verb ending that goes with the formality you want to use.

하다 is one of the most common verbs in Korean.

It conjugates a little differently than other verbs. Instead of becoming 하요 as you’d expect from the rules above, it becomes 해/해요.

If you want to talk about a current action that’s ongoing, you can use the present continuous tense. In English, this tense is formed by using am/is/are and adding “ing” to the main verb.

To conjugate Korean verbs into this tense, you drop the 다 ending and add the appropriate formality ending.

How to Conjugate Past Tense Korean Verbs

To conjugate verbs into the past tense, you need to look at the last vowel in the verb stem like you did in the present tense.

If the verb ends in ㅗ or ㅏ, you add 았다 to the verb stem.

If the last vowel isn’t one of these two, you add 었다.

Just like present tense verbs, some verbs that end in a vowel will condense.

The future tense is a little trickier than the other tenses we’ve looked at. There are multiple ways of expressing the future tense.

The nuances of each conjugation are outside the scope of this article, so we’ll just focus on the most common way of talking about a future action.

To make the future tense, drop the 다 ending from the verb and add ㄹ if the verb ends in a vowel or 을 if it ends in a consonant.

It’s also worth noting that you don’t need to add anything to verbs ending in ㄹ.

Compared to many other languages, Korean conjugation is rather straightforward. If you study and practice regularly, you’ll become a Korean verb conjugation machine in no time!