How to Start Learning French from Scratch! 11 Tips for Beginners

If you’re ready to start learning French, you’ve taken one small—but important!—step on your exciting journey through the universe of French learning just by opening this post.

Here, I’ll give you a map to start learning French in a way that sets you up for success.

I’ll be sharing 11 key tips for beginners to explore French vocabulary, grammar and pronunciation without falling into a black hole.

Ready to blast off?

Why Learning French Is the Right Choice

There are nearly 7,000 languages spoken in the world today. So why choose French over another?

Do you speak another Romance language? You’re in luck!

Romance languages (which include French as well as Spanish, Italian and Portuguese, among others) share lots of linguistic similarities. This is because Romance languages all stem from Latin.

For example, Romance languages give grammatical genders to nouns, have overlapping vocabulary and share patterns like verb conjugation.

This doesn’t mean that an Italian speaker will immediately understand French, but it does mean that knowing another Romance language makes the French learning process easier.

French is a growing global language.

Wherever you go in the world, you’re never far from a French-speaking region. French is spoken across five continents and the language is only growing!

In fact, with half of French speakers living in Africa and given Africa’s huge economic potential, speaking French will be an asset for the next generation of professionals.

From Proust to Godard, French literature can’t be beat.

Of course you can read “In Search of Lost Time” in English, but translations are never 100 percent faithful to the original. Wouldn’t it be great to curl up with an original Proust, Molière or Baudelaire?

Similarly, there’s nothing like watching those classic French films without dubbing!

Okay, so you’re at your desk and ready to start learning. But where to start?

Especially if you’ve never taken a language class before, you might not have a plan. I’ve outlined a process below that has worked well for me.

I stick to the opinion that, if you’ve never learned a language before, it’s best to take a class to get the grammar basics. You can spend hours memorizing vocabulary, but if you don’t know how to construct sentences, you’re not speaking French.

Fortunately, many classes are available for all schedules and price points. The key is to look for “intensive” courses, which will teach you the foundations of French in a short period of time (and with some hard work on your part!).

They’ll help you build good habits, get comfortable studying French and prepare you for success as you continue to advance in the language on your own.

Regular verbs are the easy part. You can learn their rules (see here for verbs that end in -er, here for -ir verbs and here for -re verbs) and then start using regular verbs right away.

But if you really want to start your French learning on the right foot, you’ve got to start memorizing those tricky irregulars, too. The thing about irregular verbs is they’re often some of the most useful, common verbs in the language—like faire (to do), aller (to go) and être (to be).

That means you need irregulars to make even the most basic statements in French!

Start memorizing irregular verbs with this helpful Memrise set, and explore the conjugation for any verb you encounter at verb2verbe.com.

It’s possible you’ve never heard of the subjunctive mood before, but it’s very important in French. As its name indicates, the subjunctive is used for “subjective” statements. It’s used to express uncertainty, desire, emotion or anything that isn’t certain.

Basically, whenever you’re saying something in French, think to yourself, “is what I’m saying factual?” This will clue you in as to whether you’ll need the subjunctive.

The subjunctive is rarely considered a beginner French topic, since it sports its own conjugation rules and it isn’t always easy to know when to use it. But the sooner you start learning it, the less foreign and confusing it’ll seem as your French skills advance.

Once you’ve got a handle on the grammar, you can start filling in the blanks by building up your French vocabulary. Much vocabulary knowledge comes from memorization and practice, but there are some strategies you can employ to make the words stick.

4. French and English share a lot of words! Study up on the cognates.

If you look up a French text right now, you’ll be amazed by how many words you can recognize. I’d say French vocabulary is easier for English speakers to pick up than other learners thanks to cognates, or related words across two languages.

Just be on the lookout for false cognates, also known as “false friends!”

It’s impossible and counterproductive to make lists of every word you don’t recognize. This is why French textbooks are usually organized by theme (home, work, etc.).

Concentrate on learning vocabulary that’s relevant to your day to day life because these are the words you’ll most frequently use.

For most French learners, this will mean learning words for food, common verbs and objects around the house. Vocabulary Stickers is a great tool to get started—these durable stickers let you label more than 100 items in your house with their French translation! That means every time you look out the window, you’ll think, la fenêtre.

6. Get more from each word.

So, if you were a robot, I’d just tell you to download a long list of French words and their translations into your hard drive.

But you’re not a robot. Staring at boring word lists just isn’t going to cut it. You need to learn French words in context, the way native speakers use them, if you really want to remember them and use them correctly.

Luckily, the internet’s got you covered with plenty of resources.

A wonderful YouTube channel to check out for this is Easy French. In these videos, an interviewer will walk around the streets of France and ask people certain questions. You can then hear them respond in natural French, with subtitles to help you along.

You can also look for programs like FluentU, which teach the language through authentic French videos.

FluentU teaches French through videos like interviews, TV show and movie clips, vlogs, music videos and more. Every video has language expert-vetted subtitles that show definitions of words and phrases at a click. You can check contextual meanings on the fly and get detailed grammar info of each word, as well. 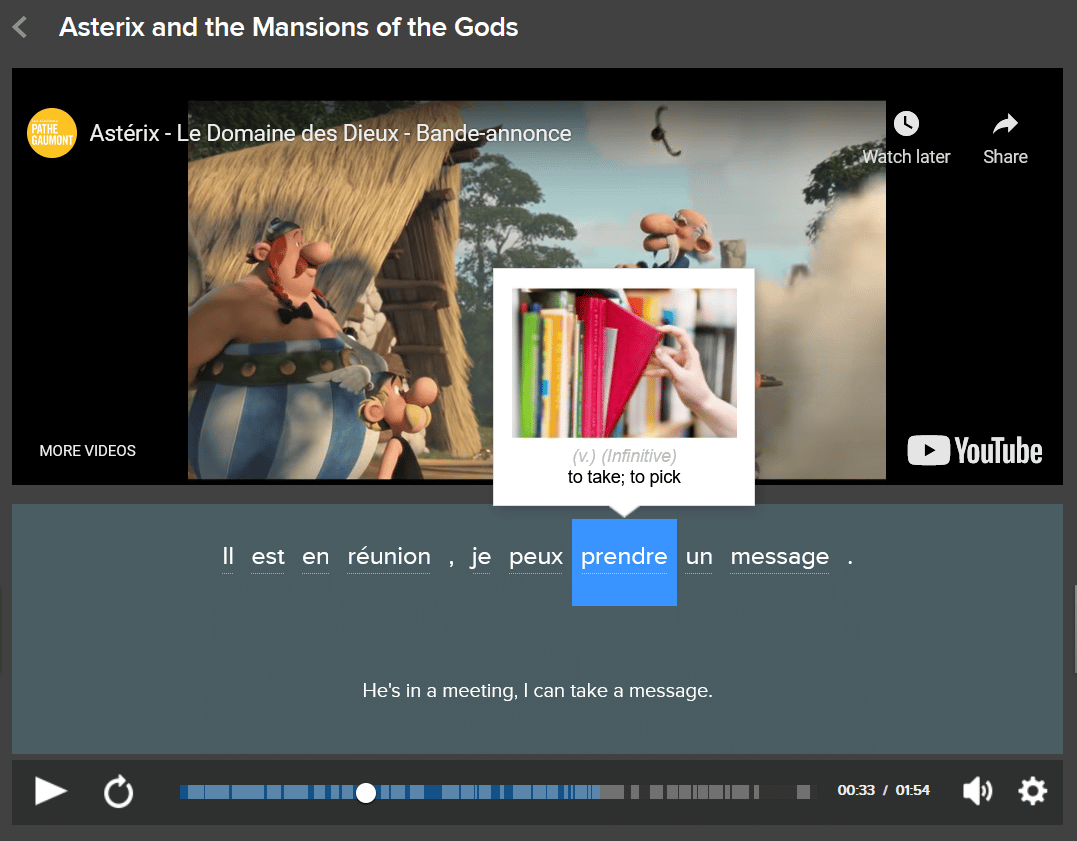 You can also review words from videos through customized personalized quizzes and flashcard decks. And if you’re on the iOS or Android app, you’ll also get some chances to say the words you’re learning out loud and practice pronunciation.

Another good way to listen to authentic French is through French podcasts. These often come with transcripts that you can read along to while the episode plays.

7. Read constantly to learn French nouns with their genders.

This is one of the biggest stumbling blocks for French learners, because there’s no way to guess a word’s gender—they just have to be memorized.

The best way to memorize noun genders is to read constantly, paying close attention to whether nouns are preceded by une/la or un/le. This will help you consistently and efficiently encounter French nouns and their genders, without boring you to death!

However, for this to work, be sure to read actively so the new words and their genders stick in your mind—highlight words, make flashcards as you read, speak them out loud.

The internet is full of great vocabulary games and quiz apps for your free time. These are useful for all levels because they let you memorize while having fun. If you’re just starting out, internet games are something you can do in your spare time… it’s a lot more fun and interactive than writing out lists to memorize!

Beginners can get started with french-games.net, an animated vocabulary game resource covering a wide range of word categories.

Spoken French is often the most feared aspect of the language. Unlike Spanish, French isn’t pronounced as it’s written. For example, the word endings “é,” “ais,” “ait” and “aient” are all pronounced the same! So with this daunting task of speaking and understanding spoken French, what can you do to reach fluency?

9. Find an excuse to speak French every day… to yourself, in the shower, it doesn’t matter!

I’m always speaking out loud to myself in French.

Maybe you’ll get stares in the street, but accept them with pride! I literally say whatever comes to mind… the point is to speak fluidly and consciously listen to your pronunciation.

You might even record yourself and listen later in the day with a dictionary to catch your mistakes.

10. Look for language exchange partners to get conversation practice.

To test your spoken French, you have to actually speak to someone!

Meetup has French conversation groups in many cities. Often these groups are “language exchanges,” meaning you and a native French speaker will spend part of the time speaking in French and part in English, so you both get practice in.

If you can’t find a group near you, check out MyLanguageExchange.com to talk with people all over the world.

11. Have some free time on your hands? Time to go abroad!

This is the final test. The deep end of spoken French.

It’s time to take a vacation to France or another French-speaking region and interact with the locals. Your French will improve amazingly even after a short time abroad if you consciously avoid English (no English-speaking tour groups!).

Charlemagne once said, “to have another language is to possess a second soul.” Learning French opens your mind to a new way of thinking. Not only do you learn the language, you learn the culture, the history. For reasons both personal and economic, learning another language, especially a widely spoken language like French, is one of the best decisions you can make.