If you’ll allow me to be a bit crass, French verbs can be a little bit like using the men’s or the ladies’ room: it’s best to keep it regular.

Patterns abound in regular verbs—whether you’re tackling the future tense, the past tense or even French grammar as a whole.

But there are some more patterns to find on the irregular side of things.

Let’s take a look at irregular verbs in the present tense, and try to keep things “regular” by pointing out as many patterns and groups as possible.

As I’m sure you know by now, there are two types of verbs in French. The first type are called regular verbs. These verbs are regular because they follow a set pattern. These set patterns prevail not only in the present tense, but also in any additional tenses that a verb undergoes.

But why are these verbs enjoyable like a trip to a well-kept washroom? They’re predictable.

Irregular verbs, on the other hand, do not follow a pattern. Their final letters do not determine what conjugated endings they will receive. As such, these verbs need to be memorized because even though there are far more regular verbs than irregular ones, irregular verbs encompass some of the most important and common verbs in the French language.

So, pack up some fiber, French learner. Let’s find a way to keep these irregular verbs regular!

Like the crossword puzzles awaiting you beside your porcelain throne, the following verbs are essential to know—perhaps the most important irregular verbs in all of the French language.

Furthermore, the irregular verbs être (to be), avoir (to have) and aller (to go) are used in compound tenses: the first two being support verbs for the passé composé (the past perfect) and the third being a support verb for the futur proche (the near future).

Let’s see how these verbs are conjugated in the present tense.

Perhaps the second most important group of irregular verbs are the modals. Think of these verbs like the pencil to your crossword on your porcelain throne; arguably, the crossword is the most important, but without the pencil, you’ll be pretty lost.

As such, modal verbs are a very special type of verb in French. They are a type of helping verb that modifies the “mood” of the unconjugated verb that comes afterward, which is a fancy way to say that these verbs indicate ability, possibility, desire or necessity.

For example, the verbs vouloir (to want), pouvoir (to be able to) devoir (to have to) and savoir (to know) are all modal verbs. Check out their conjugations:

Pouvoir (to be able to)

Devoir (to have to)

I’m sorry to be the one to tell you this, but everything you know is a lie. It’s like you’ve sat down on your golden throne and *gasp*, you’re out of toilet paper.

Except in this case, those –er verbs you thought you had all figured out aren’t quite so regular after all. But worry not, there are only a few exceptions. In fact, these irregularities are called stem changes, and rather than being irregular verbs completely, they are simply a sub-class of -er verbs.

A stem change happens when the root of the verb (the base of the verb without -er) sees a spelling change before regular -er conjugation takes place.

Below are the conjugations for the irregular, stem-changing –er verbs appeler (to call) and manger (to eat).

With appeler, we double the “l” in certain conjugations to keep the longer -e sound before the “l.” If there were no double “l,” the preceding e would become a short e sound, which is not the correct pronunciation. This same doubling-up happens with other verbs, as well such as rappeler (to call back) and jeter (to throw).

In the case of manger, the nous form of the verb adds an e to keep the soft pronunciation of the letter “g”—like the “g” in the English word “regime” (which, incidentally, comes from a French word anyway).

Because of this, most verbs that end in –ger keep their e in the nous form to keep that “g” sound. Some other verbs that have this same change include bouger (to move), corriger (to correct) and voyager (to travel).

You thought you were into the clear, didn’t you? I’m sorry to break it to you, but –er verbs aren’t the only regular verbs with irregular exceptions. It’s like you’re looking for toilet paper, but it turns out it isn’t just missing from the bathroom, there’s no TP to be found in your entire house.

I’m taking this a little too far… I apologize.

In any case, the following –ir verbs are considered irregular: tenir (to keep) and venir (to come).

These two verbs are very similar irregular verbs; their only difference is their first letter. Learn one, and you know the other. Who doesn’t like twins, right?

Some other verbs conjugated like these two include devenir (to become), obtenir (to obtain) and appartenir (to belong to).

Confusingly, the verb ouvrir (to open) is different from a regular -ir verb because it’s conjugated like an –er verb. Check it out:

Other verbs that are conjugated like this include découvrir (to discover) and couvrir (to cover).

The next two verbs end in –oir (as if being irregular and ending in -ir wasn’t enough…). When conjugated, voir and recevoir have the same endings, even though their stems change throughout the conjugation. We’ll start with voir:

Oh, –re verbs. Sometimes I think that there may be more irregulars among you than there are regulars. But let’s get right down to it. We have a lot of ground to cover.

Let’s start off simple with prendre and apprendre. These two verbs are almost regular except for a few stem changes. This is different from regular -re verbs because they drop an extra letter in the nous and vous forms.

Other verbs conjugated like these two include comprendre (to understand) and surprendre (to surprise).

Yay for more groups! These verbs are also conjugated similarly.

Other -RE Irregular Verbs

Croire (to believe) and boire (to drink) are two more irregular verbs we can pair together. While their conjugations aren’t identical, they’re similar.

And the following are miscellaneous irregular –re verbs. The first two are almost regular -re verbs, but they drop an extra letter in their je, tu, il and elle forms.

Other verbs conjugated like mettre include admettre (to admit), permettre (to permit) and promettre (to promise).

The final irregular -re verb I’ll include—as well as the last in this post—is vivre (to live).

How to Practice Irregular French Verbs in the Present Tense

Once you finish soaking up this post, you’ll want to put your new knowledge to practice right away.

At that point, first check out this article on Wikitionary for a complete list of irregular, present tense verbs in French.

Then, Laura K. Lawless of Lawless French has tons of great reference articles on irregular verbs (in addition to almost any topic of the French language). Following the link above, just click on the group you want to read more about (irregular -er, -ir or -re), and you’ll find helpful explanations and loads of clear examples.

Her partner site Progress with Lawless French, powered by Kwiziq, has “kwizzes” you can take to practice grammar, assess your level and receive a personalized study plan. Free accounts are limited to 10 quizzes per month, while Premium accounts are available via a paid monthly subscription.

To continue practicing, Conjuguemos, the University of Texas and About French also have some great free quizzes online.

And don’t forget the importance of hearing these verbs used authentically. You can watch and learn from FluentU’s library of authentic French videos, for example, to internalize the conjugations. Just pay attention to how they’re used in real French media clips like movie trailers, commercials and music videos. 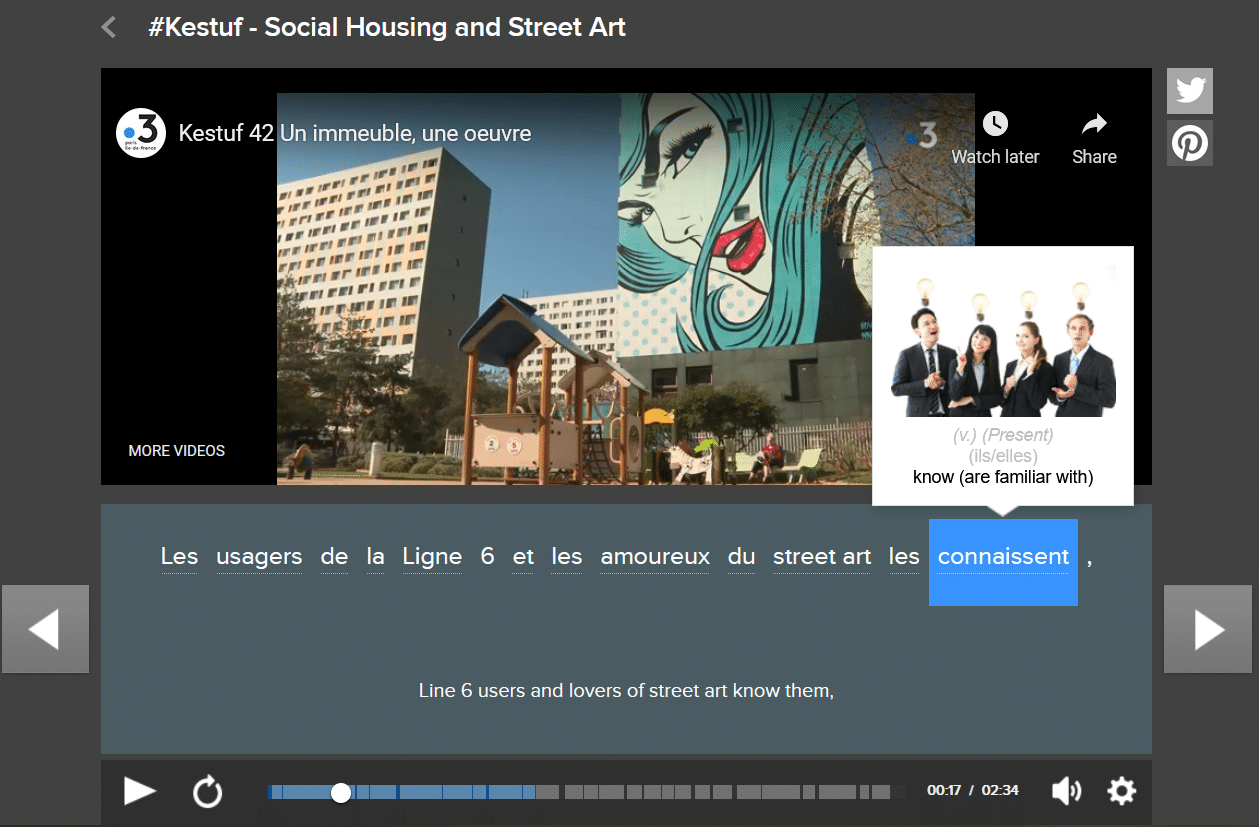 You can also click on specific verb conjugations in the subtitles and add them to your vocabulary list. Each flashcard has example sentences, audio pronunciations and clips from other videos where you can hear the word, so you can get plenty of context for how to use it. You can also study it using FluentU’s personalized quizzes, which also include speaking opportunities in the iOS and Android apps.

Finally, you can always use a handy-dandy online conjugator for those times when you just can’t remember how to conjugate a verb.

Now scroll back up to the practice section and try putting some of this knowledge to use.

And although the names match, I must stress that irregular practice is actually no way to learn irregular verbs.

So remember, keep it regular!