Like… Huh? 10 French Filler Words to Make You a French Conversation Master​

When it comes to learning French, there are a lot of things textbooks won’t teach you—from slang to informal French that you’d only hear in the streets of France.

And one of the things you’ll discover as you’re more exposed to the French language is filler words.

How do you fill the gaps in your French sentences, while you think of the right word? With these 10 indispensable French filler words!

While the topic of filler words may seem like small potatoes in comparison to topics such as the past tense or the subjunctive, in fact, these words are very important and they play a bigger role in French than you might imagine. In spoken and even in formal written French, filler words make up a surprising amount of the language in terms of frequency.

Filler words correspond to the English words “uh” or “um” or “like,” and while their functions generally correspond to their English equivalents, sometimes their meanings are slightly different.

Furthermore, some filler words are also “real” French words, meaning that these words can be used in formal, academic French as well as in their informal, filler word role. Knowing the meanings of these words and the context of the situation will help avoid any confusion.

For example, the word fin (end) is a filler word that’s also an actual French word.

Lastly and most importantly, using filler words will allow you to better your French conversation skills. Despite getting a reputation for being substandard, informal French, filler words are used by French people every day! In order to speak like a native, learn French filler words!

10 French Filler Words Fill the Silences in Your Sentences

Check out these 10 filler words to, like, uh… fill up your French and sound like a real French native in no time!

Our first word is none other than the French word alors, or “well” in English. Alors is probably the most common filler word, and in fact, it’s so common that it can be heard in French classrooms all around the world—and not just from students.

The best thing about alors is that it’s often not regarded as an “informal” filler word. Along with teachers, this word can be heard in speeches, business presentations and even in political proceedings. In fact, you can even use it in formal writing!

Translated as “so” or “well,” alors is often used as a transition word at the beginning of a sentence to draw attention to a topic or a change of topic. Check out this example:

Alors can also be used in place of the English expression “So what?” In this sense, it asks for clarification of a previous statement, often in a rude or sarcastic way:

Euh is the French equivalent of the English word “uh” or “um,” and the good news is that it’s used pretty much the same way. Like in English, euh is generally used as a pause or a moment to think. Along with alors, euh is extremely common, but unlike alors, it’s very informal:

Quoi is perhaps the most confusing filler word to beginner French learners. Technically, it translates to “what” in English, and it’s used to ask questions:

As a filler word, quoi better translates as “you know?” or the British “innit?” In fact, it’s used to give weight or highlight what you’re saying:

Related to quoi, hein is another popular French filler word. Hein translates to the English word “huh,” and it can be used in many ways. Firstly, it can be used to indicate that you don’t understand something that has been previously said. However, be aware that this is regarded as very rude:

Secondly, you can use hein to mean “right?” or in place of the French n’est-ce pas ? (Isn’t that right?):

The filler word bref translates to “brief” in English, and its function as a filler word is pretty self-explanatory. It’s the English equivalent of “basically” or “long story short,” and it’s generally used to sum up a long explanation and give the “low-down” on a particular topic:

Pronunciation tip: While you might be tempted to not pronounce the “f” at the end of the word bref, it actually is pronounced. In theory, the French word bref should rhyme with the English name “Steph.”

The next filler words on our list, ben oui and ben non, are a little bit confusing and there is some debate as to their exact meaning and function. We know the word oui means “yes,”and non means “no,” but the word ben can be seen as an informal version of the French word bien (well).

Together, these two expressions translate to “well, yes” or “well, no.” Basically, they’re used as an affirmation or negation of a previously stated topic:

Et un croissant ? (And a croissant?)

En fait literally translates to the English “in fact,” and like alors, its use in different social contexts is quite flexible. In fact, it can be used in formal French speech as well as in formal French writing. In the informal way, en fait means “actually.” It can be used when changing your mind or trying to clarify what you’re trying to say:

Pronunciation tip: Like bref, the “t” at the end of the expression en fait is pronounced to rhyme with the other French word fête (party).

Perhaps the most confused filler word for beginners is genre. First of all, it technically means “type” or “gender,” but in informal French, it translates more to the English filler word “like.” In fact, it’s used in the same way “uh” or “like” is used in, like, English.

Pronunciation tip: Keep in mind that this filler word is often pronounced very quickly in informal situations, so it can sound like jor instead of what we’d expect: jen-ruh.

Last but not least, the expression quand même is a filler word with two meanings in French. First of all, it has a formal meaning of “even though” or “still,” but as a filler word, it can translate as “Wow!” or “No way!” In this sense, it’s used to show surprise or excitement about a given topic or revelation.

Perhaps the best way to understand these French filler words and to use them naturally is to hear them used regularly by speakers.

You can look for filler words and how they’re used in authentic French videos, like the ones on the FluentU program. On FluentU, you can watch native French clips with interactive subtitles. This way, if you’re not sure if a word is being used as a filler, you can click on it to see its contextual definition. You can also search for a filler word and check its flashcard for examples of it in use in FluentU videos. 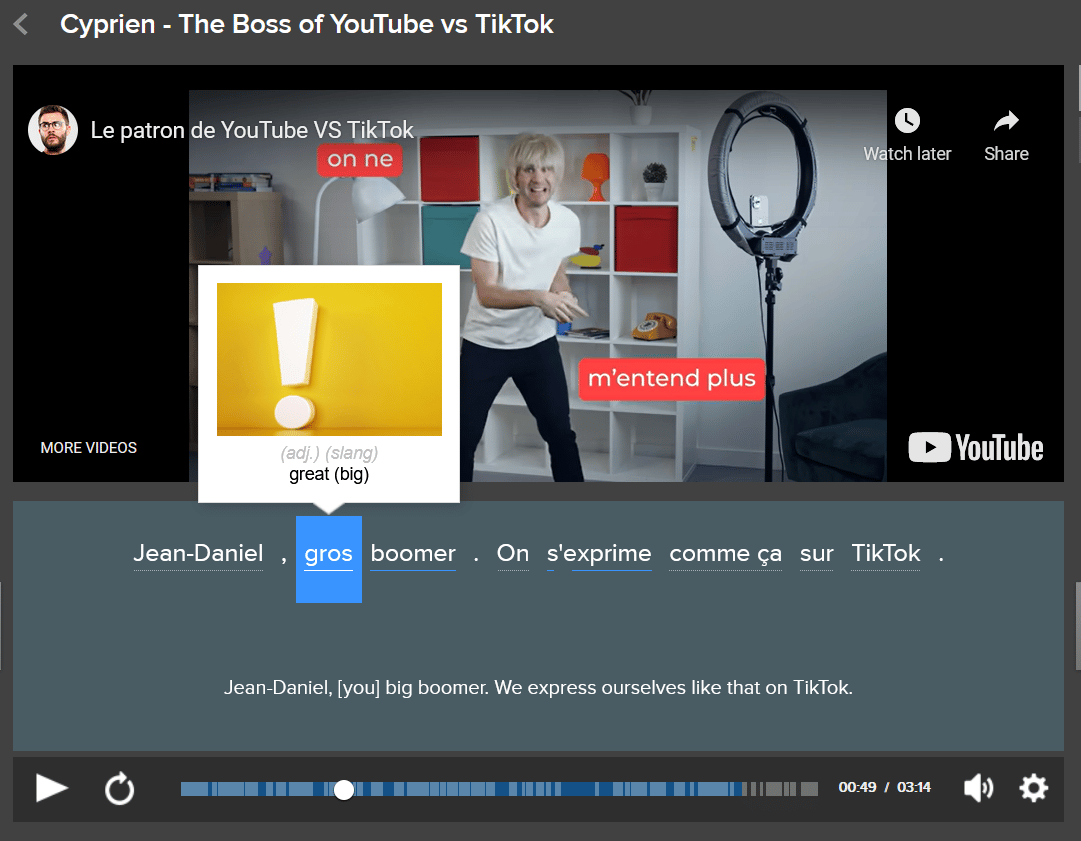 So, like, get out there and, uh, master French filler words, you know?