How can just three little words be so important?

When I first read about this phrase in my French 1 textbook, I found il y a downright peculiar—the letter y is its own word and pronounced as “ee?!”

As I learned and used French more and more, I found that these three little words were central not only in conversation, but also in literature, in movies, on social media… much like the phrase “there is/are” in English.

In this post, we’ll show you how helpful il y a can be and how to properly use it, in different contexts and with negation.

The most common and well-known translation of il y a is “there is” or “there are.” It’s definitely one of those very simple, yet absolutely essential, phrases to know.

Good news! Il y a doesn’t change in most grammatical contexts. For once, the French counterpart is simpler than the English!

While we differentiate between singular (“there is”) and plural (“there are,”) il y a is used in both cases:

Il y a toujours un livre dans ma voiture. (There is always a book in my car.)

Although in the second example we’re talking about a group of multiple people, we still say simply il y a.

Even more good news: il y a doesn’t change for gender. Even if you’re talking about something feminine, you say il:

Il y a un gâteau sur la table. (There is a cake on the table.)

Okay… although il y a never changes for number or gender, it may change depending on verb tense. The most common alternate forms to remember are il y avait (there were) and il y aura (there will be).

As you can see, you essentially need to conjugate the verb avoir (to have) in the third person and the tense you need.

Il y avait beaucoup de pluie pendant nos vacances. (There was a lot of rain during our vacation.)

Il y aura environ 200 personnes au mariage. (There will be about 200 people at the wedding.)

Don’t become overwhelmed though, especially if you’re a beginner. Il y a is by far the phrase most commonly used in everyday conversation.

Then again, we can’t make French too easy, can we?

As Time Goes By: When Il y a Means “Ago”

Il y a is also commonly used when talking about time. Just include il y a, a period of time and some kind of action or event. This construction conveys the meaning of “ago”—how much time has elapsed since something has taken place.

Elle a dîné il y a deux heures. (She dined two hours ago.)

Il y a and the period of time may come before or after the main action. However, as in the second sentence, if il y a precedes the action, que must connect the two.

To provide another example, the first sentence could be rephrased as:

Il y a deux heures qu’elle a dîné. (She dined two hours ago.)

Note that il y a is used with a completed action—something that’s already over and done with.

She isn’t eating dinner right now—she finished two hours ago. Similarly, I’m not still moving my stuff to Chicago—I was moved in as of 10 months ago. 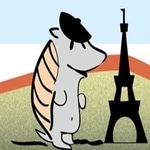 Depuis is another helpful expression of time that describes how long something has been occurring, as in:

J’habite à Chicago depuis dix mois. (I have been living in Chicago for ten months.)

For more information about depuis and to practice the difference between depuis and il y a, check out this page from Tex’s French Grammar.

Over Yonder: Il y a for Distance and Direction

Although this usage is less common, il y a may also be employed to indicate how far away a place is.

Il y a moins qu’un kilomètre d’ici à la boulangerie. (There is less than a kilometer from here to the bakery.)

Il y a 490 kilomètres entre Paris et Strasbourg. (There are 490 kilometers between Paris and Strasbourg.)

Again, note that this usage is similar to English. We sometimes say “there is” or “there are” to discuss how far away places are.

Not too difficult, but helpful to be aware of.

Bonus! You get to practice French prepositions such as de (of), à (to) and entre (between).

So Negative: Il n’y a pas

Once you’ve been introduced to il y a, it isn’t hard to become familiar with il n’y a pas. Just remember the proper placement of n: il n‘y pas.

Il n‘y a pas de viande dans ce repas. (There is no meat in this meal.)

Il n‘y a pas de mensonges dans cette témoignage. (There are no lies in this testimony.)

Did you notice the use of de in both those sentences?

Indefinite articles (un, une) and partitive articles (including de la, du, de l’ and des) become de when used with negation. Compare the first example above to its equivalent in the affirmative form:

Il y a de la viande dans ce repas. (There is meat in this meal.)

While de la communicates the idea of “some,” de with ne… pas tells us that there’s absolutely no meat in the meal.

Remember what I said about French not being too simple?

You might recall that there are actually several ways to make a sentence negative in French, each having a specific meaning, including:

These are formed in the same way as il n’y a pas. Simply replace pas with the alternate word.

Il n‘y avait rien à faire. (There was nothing to do.)

Extra credit opportunity: did you notice that I employed the imperfect form of avoir in the second sentence?

Because we’re talking about a past situation in which there was nothing to do, avoir is conjugated in the imperfect tense for il and becomes avait.

Remember that, despite this change, il and y remain exactly the same.

If you’re feeling overwhelmed by all the negativity (sorry, some of these terms are just asking to be made into puns), try this exercise that further explains and helps you practice the several negative forms in French.

Huh? Il y a in Questions

Beginning a sentence with y… and following it with another vowel sound?

Y a-t-il is the inverted form of il y a that’s often employed in questions. The English equivalent would be “is there?” or “are there?”

Y a-t-il des cravates dans ce magasin? (Are there ties in this store?)

Y a-t-il un médecin ici? (Is there a doctor here?)

You may remember, however, that inversion isn’t the only method for forming questions. Similarly, there’s another, simpler, way of asking a question with il y a: Est-ce qu’il y a…? (Is there/are there…?)

Est-ce qu’il y a un médecin ici? (Is there a doctor here?)

The question means the same thing both ways. In the second one we simply keep the normal il y a and add est-ce que (literally, “is it that”), which signals that we’re asking a question.

Est-ce qu’il y a un étudiant français dans ta classe? (Is there a French student in your class?)

Well, there it is.

There is your introduction to il y a.

There are your tips for properly using and interpreting it.

Now that we know about il y a and all its forms, make sure you practice it all! Keep an eye out for this phrase as you read or listen to French content, and see if you can identify its translation according to the context.

When you’re watching movies or series, switch on the French captions on Netflix or whatever your favorite streaming platform is, so you have the support of French text. For a little more guidance, the subtitles on the video-based program FluentU are interactive, supplying contextual information on il y la and other phrases with just a tap.

See, I told you il y a comes in handy!