20 Common French False Friends to Watch Out For

Have you ever trusted blindly and gotten stabbed in the back?

Long story short, you have to be careful out there.—but by learning these false cognates now you’ll save yourself from future confusion and embarrassment!

What Are French False Friends (aka “Faux Amis”)?

When French words look like English words, they really ought to mean the same thing, oughtn’t they? Often they do, fortunately, but some words don’t play fair. And those are the faux amis, which literally translates to “false friends.” These words can easily trick you into getting the wrong end of the stick, or to say something senseless or embarrassing that you hadn’t intended at all.

The Challenge of French False Cognates

False cognates are words that look identical in both languages but whose meanings differ. For the purposes of this blog, we’re also including “semi-false cognates” in our list of faux amis. Semi-false cognates are words that don’t look exactly the same, but they’re similar enough to invite confusion. An example of a French false cognate is the word grand. If you visit a grand city, you would expect to see impressive buildings since the English “grand” means it has a wow factor. But if you go to une grande ville expecting to be wowed, you’ll probably end up being disappointed instead. That’s because in French, the adjective grand(e) often simply means big. The town could be a dump, but if it’s big it could correctly be described as grande. 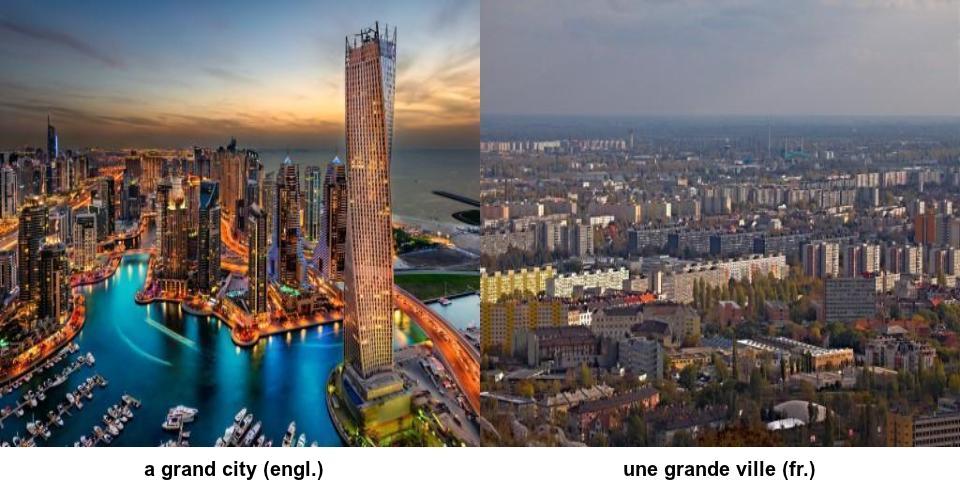 Semi-false cognates can set you up for disappointments too. For instance, you might fix up a blind date with une jolie fille, confidently looking forward to a fun evening with plenty of laughs. A jolly girl is sure to have a good sense of humor and be great company, even if she leaves something be desired in the looks department. But since the French adjective joli does not mean jolly, but rather means pretty, you could be wrong on both counts. She’ll be drop-dead gorgeous, but she might turn out to be as miserable as sin and not crack a smile all evening. The consequences of being led astray by a false friend can range from being left feeling slightly puzzled, to suffering acute embarrassment when you see, from the other person’s reaction, that you’ve said something rather shocking. 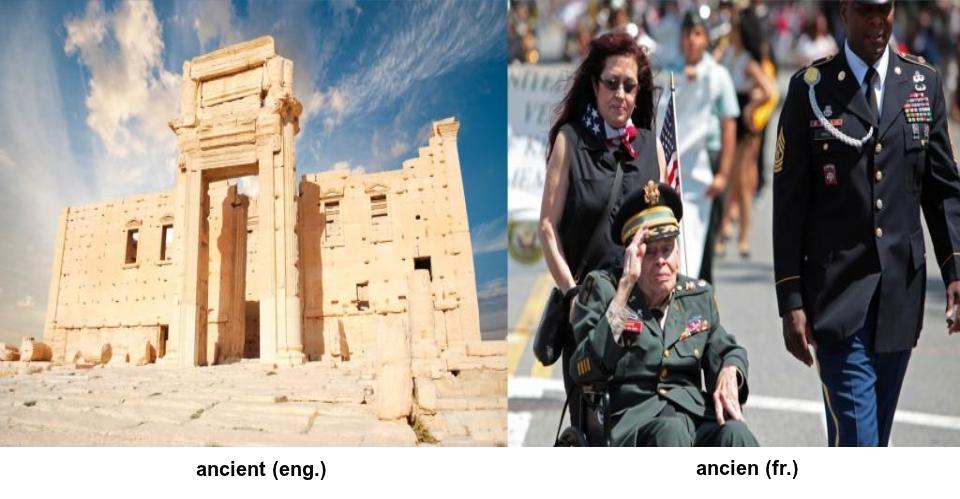 Ancien can mean ancient, but more often it means former. It’s important to know that un ancien combattant means an old soldier in the sense of a former soldier. It doesn’t mean that he’s as old as Methuselah. Similarly, the ancien maire of a commune is the former mayor, who might still be a young man; your ancienne voiture is the car you used to own; and l’ancienne gare describes the former station building, probably converted to another use such as a house, a shop, or a café. A good rule of thumb is that if ancien comes before the noun, it usually means former rather than ancient/old.

Attendre means to wait for. Je t’attends is one of the little phrases that boyfriends and girlfriends often text to each other when they’re spending time apart. They’re really aying “I’m waiting for you,” and not “I’m attending to you.” If you’re planning on romancing someone in French you’ll need to know this distinction (and learning these French romance words too wouldn’t hurt!). 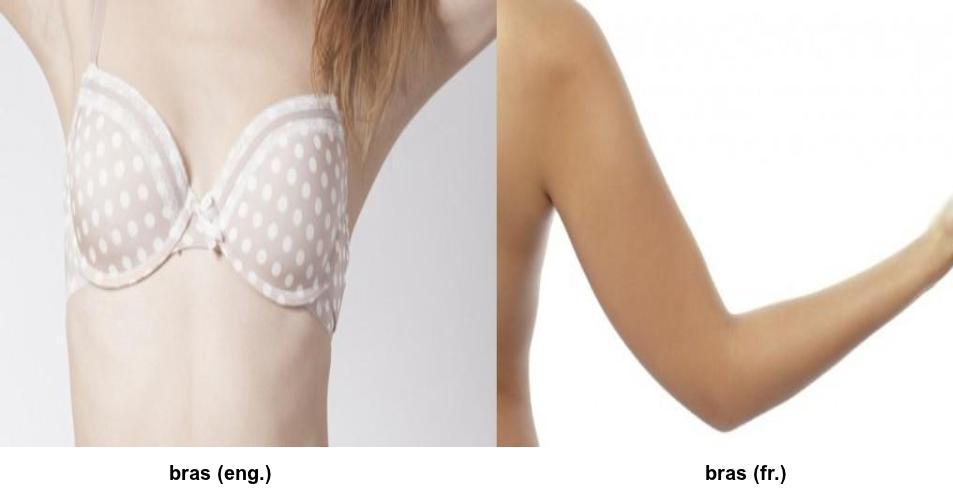 Votre bras means your arm, the limb between your shoulder and your wrist. It has no connection whatsoever with female undergarment. The French word for a bra is un soutien-gorge. 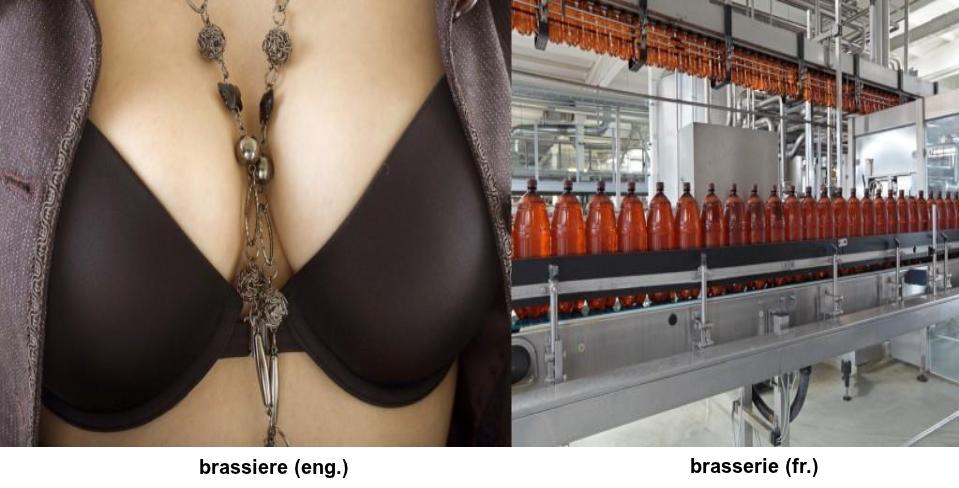 Again, no connection with lingerie. Une brasserie is either a brewery, or a bar that serves meals. 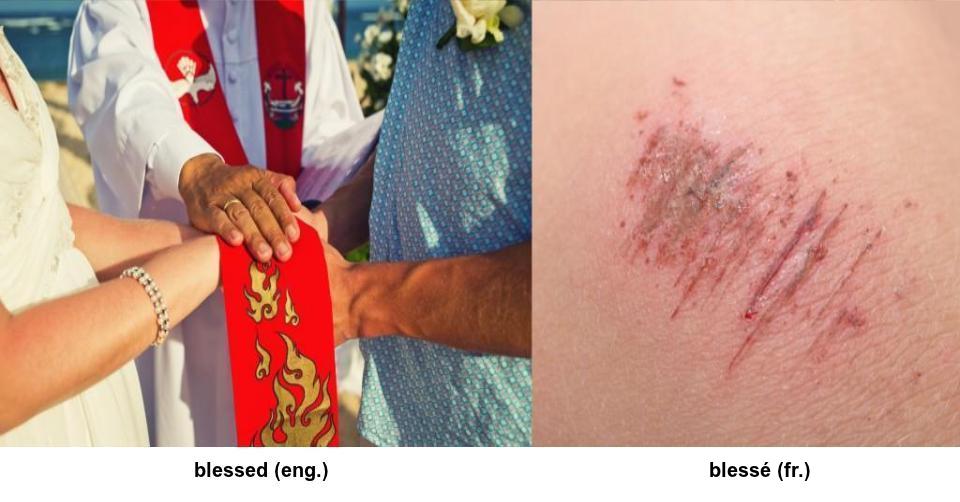 Blesser means to wound, either emotionally or physically. So un enfant blessé is not a child that you are expected to kneel down and worship, but more likely a child that needs patching up with an antiseptic wipe and a bandage. 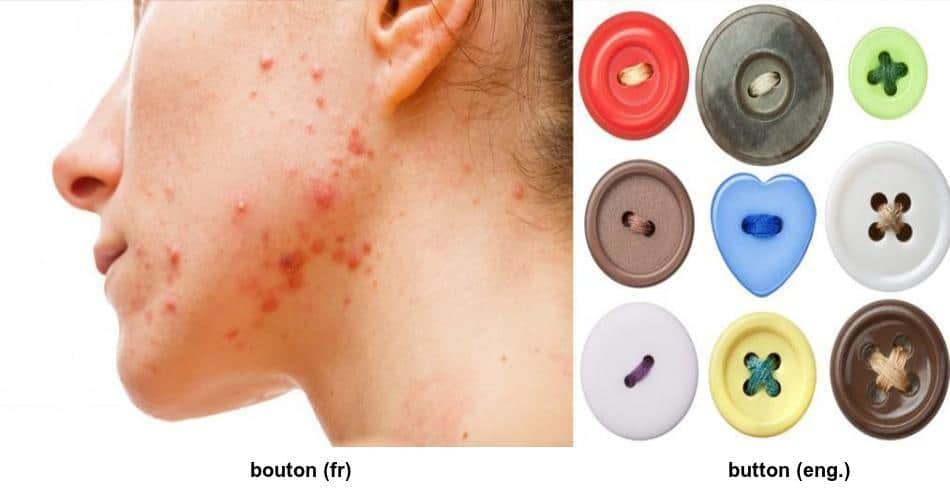 Bouton does indeed mean button, but you might be mystified to hear French teenagers complaining about their boutons. They’re actually worrying about their complexions, since un bouton also means a pimple. Teenspeak can often be baffling to the uninitiated, but these 15 French slang words every French learner should know will help you keep up with le langage des ados (teen-speak). 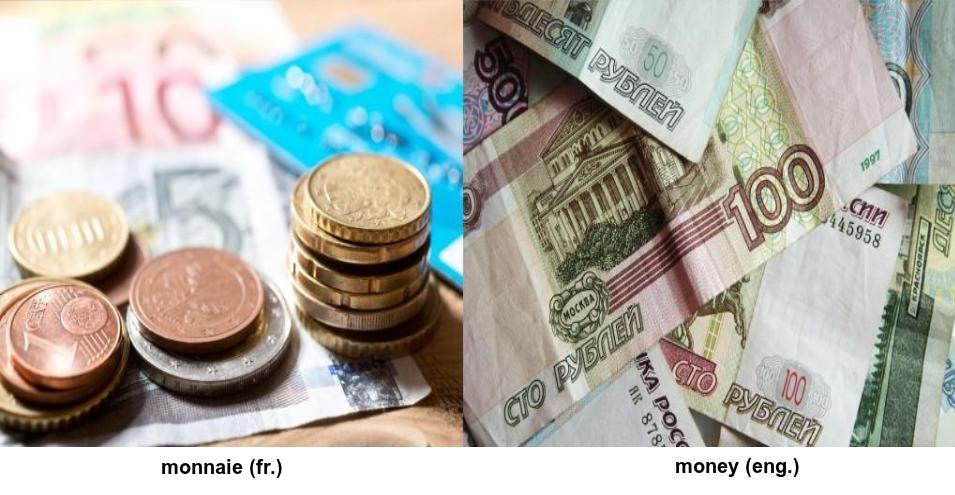 Monnaie means loose change. A person who gets to the checkout and says they have no monnaie is apologizing for not having the right change. You could easily have no monnaie, but plenty of money. 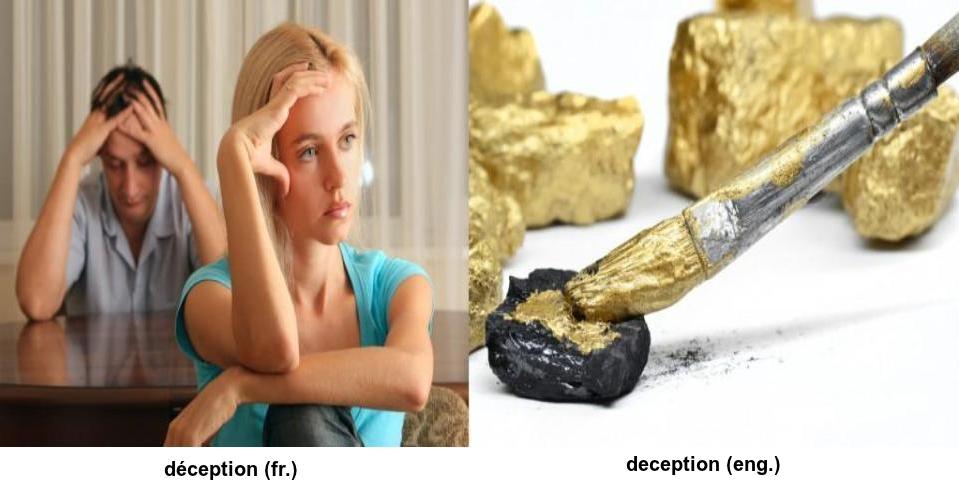 This is a sneaky faux ami. The verb decevoir, the noun déception, and the adjective déçu all have to do with being disappointed or disillusioned, and not actually deceived. This could lead to a fundamental misunderstanding if you think that somebody is accusing another person of deceiving them, rather than simply disappointing them.

You need to be careful with this one. The verb envier can be used in the sense of “to envy,” but the noun envie means wish or desire. You could say “J’ai envie d’une glace,” meaning “I want ice cream.” What you shouldn’t say is “J’ai envie de toi” if you mean “I envy you,” because what you would actually be saying is, “I want you.” Of course, if you listen to French pop music and watch French movies as part of your language learning strategy, you won’t fall into this trap because that particular phrase crops up very regularly whenever love and passion come into song lyrics or movie scripts. 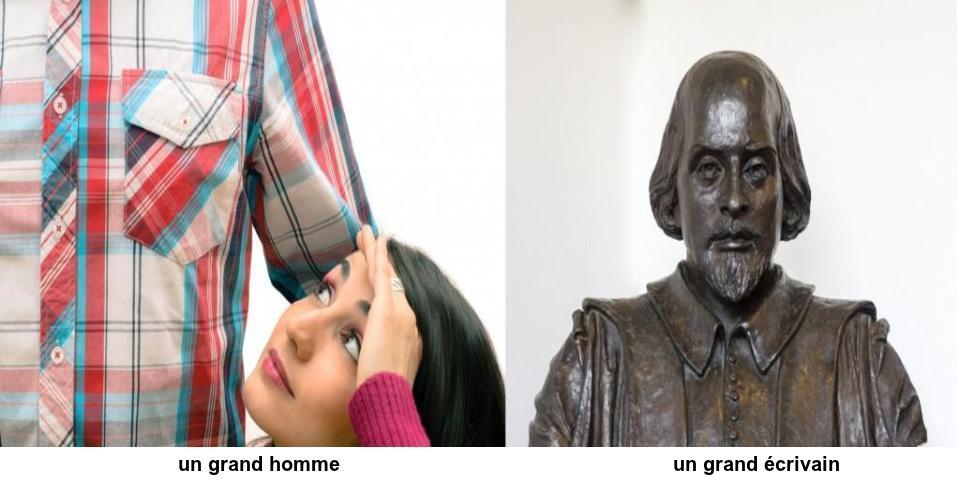 Grand can mean great (un grand écrivain is a great writer), but it can also simply mean big. When used to describe a person’s physical appearance, it means tall. 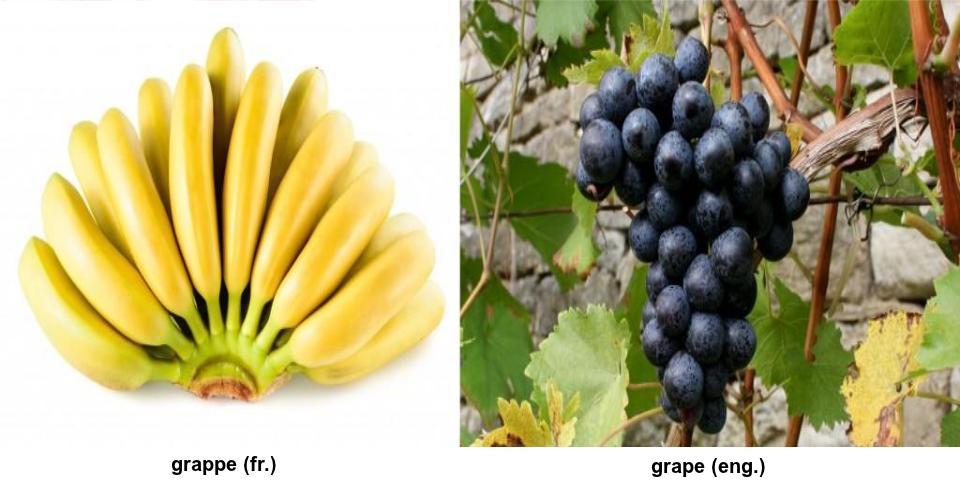 Une grappe de raisins does indeed mean a bunch of grapes, but don’t get confused; grappe means bunch. You can also have une grappe de bananes without a grape in sight. 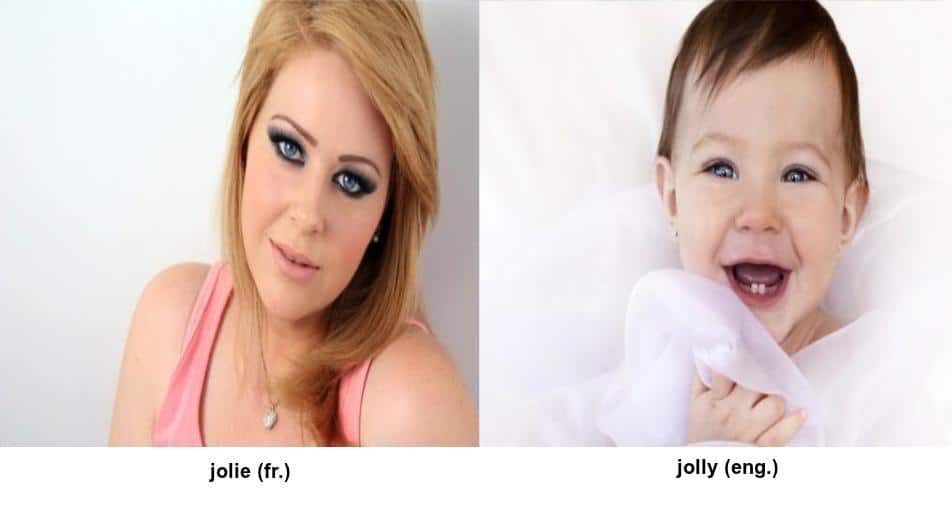 Joli(e) means pretty, and is used to describe objects as well as people. 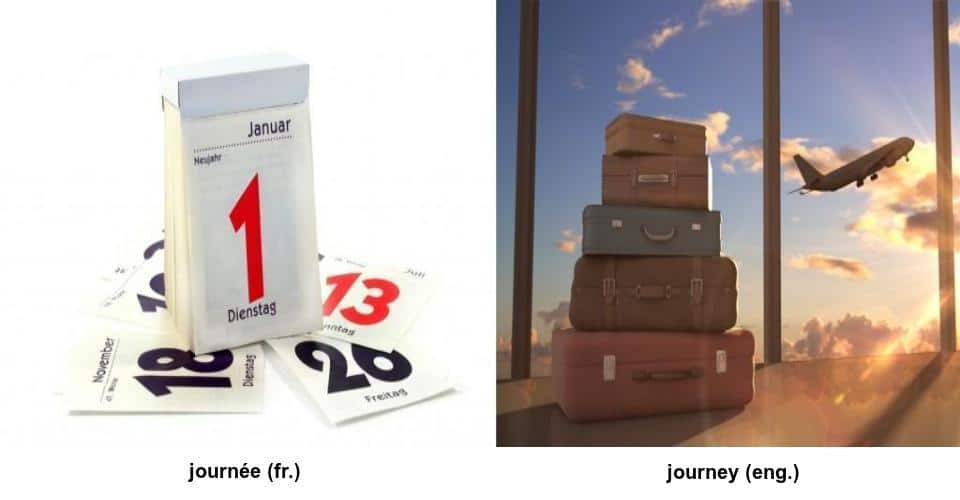 This is a very common false friend. Une journée is a day, so if somebody wishes you “bonne journée,” they are saying “have a nice day.” It doesn’t mean they think you’re going off on a journey. 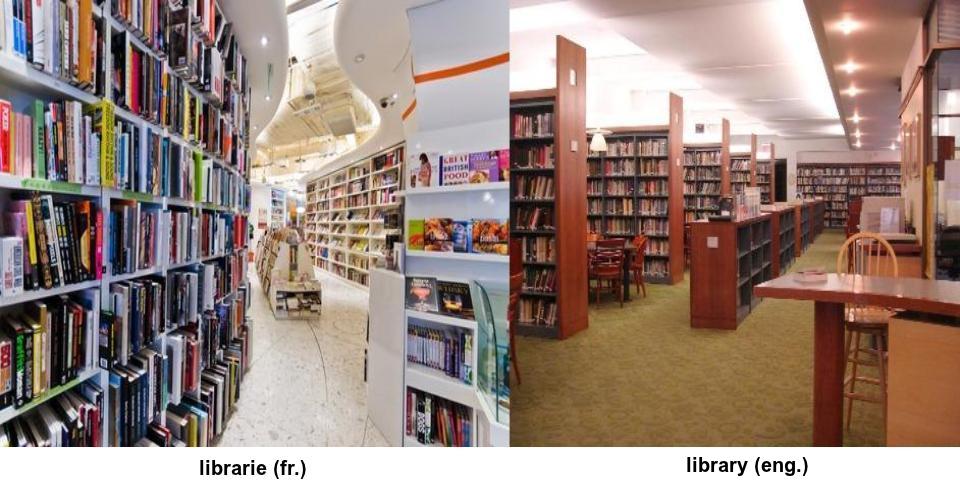 This is another – often confused – faux amis. There is a book connection, but une librairie is where you go to buy a book, not to borrow one. It means a bookshop or newsstand. If you want a library, it is une bibliothèque, or these days, it’s often part of la médiathèque. Keep these differences in mind while hunting down your next French book for your language learning routine! 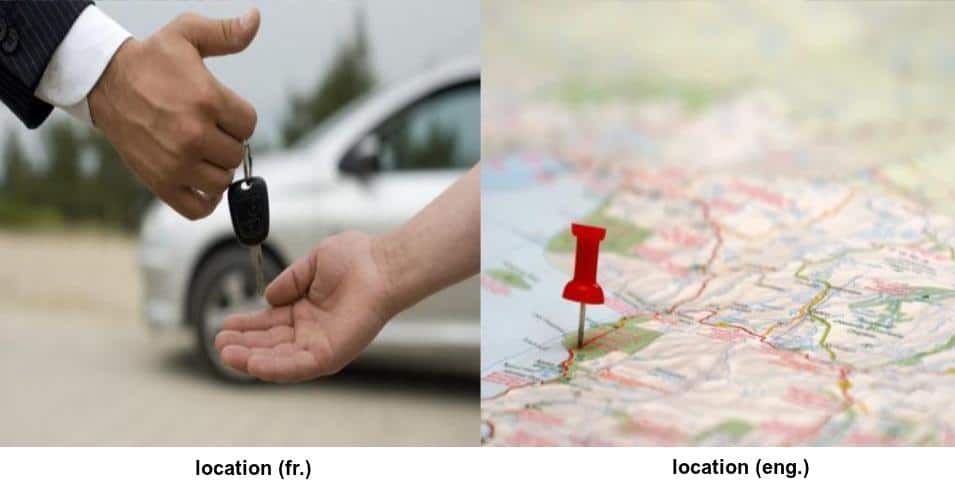 Location means rental. This can cause confusion because you often see advertisements describing “Les meilleures locations de vacances,” which looks as if it is saying “the best vacation locations.” It actually specifically means “the best holiday rentals,” so it’s all about accommodation for rent as opposed to places to visit. 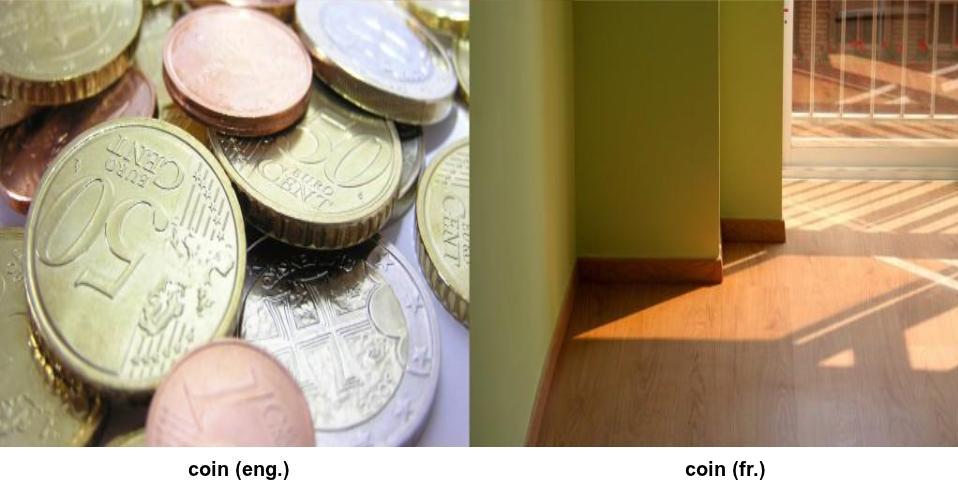 Coin is the French word for corner. It has nothing whatsoever to do with the jingling money in your purse – those are pièces or monnaie. Dans le coin means in the immediate neighborhood, and “coin-coin” is what French ducks say instead of “quack quack”. 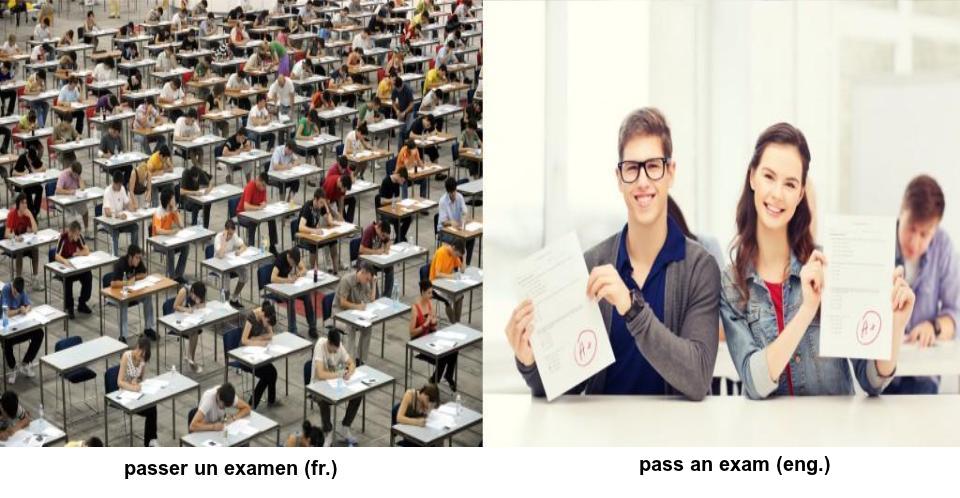 Passer un examen does not mean to pass an exam. Rather, it means to take an exam. So if a French friend who’s been learning to drive says “J’ai passé le code ce matin,” do not immediately start congratulating him or her on passing their driving test. You need to wait until they get their email or letter telling them the result before you start celebrating! To pass, in the English sense you’re probably more familiar with, is réussir. 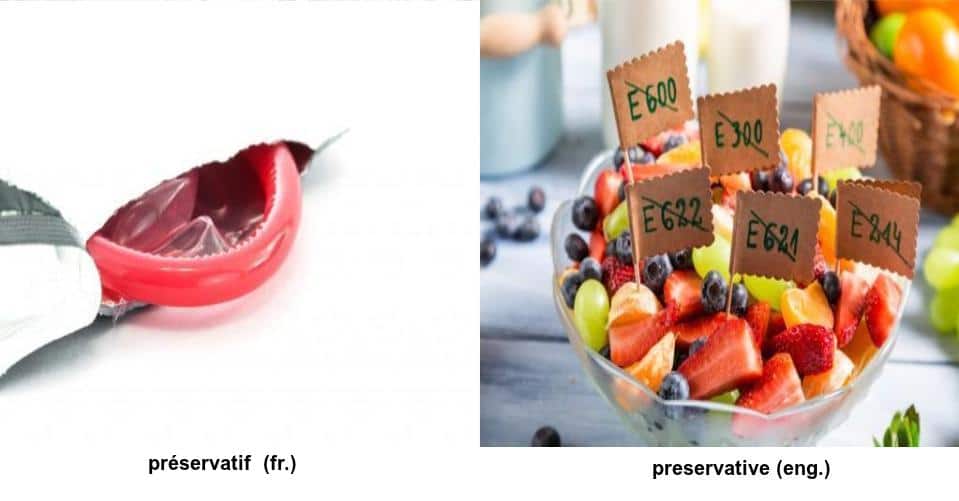 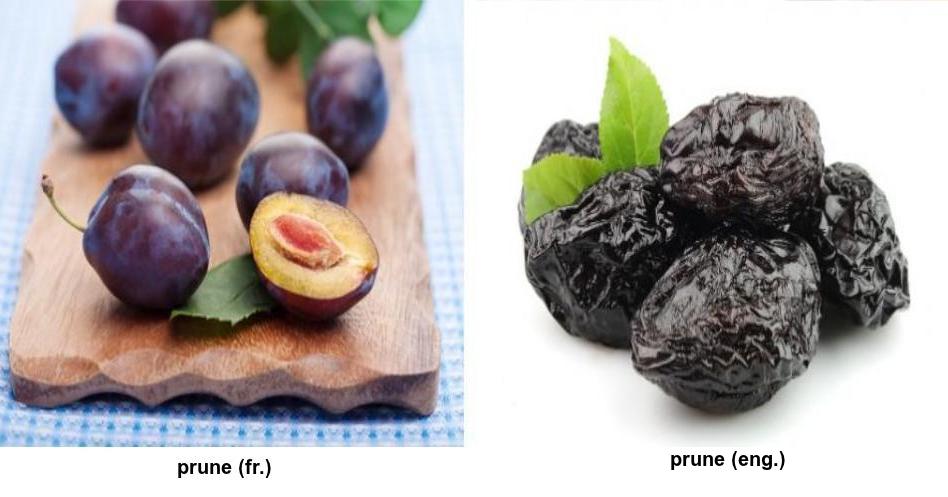 You can’t trust words that describe fruits and their dried equivalents. Une prune is a plum. When you dry une prune to turn it into a prune, it becomes un pruneau. 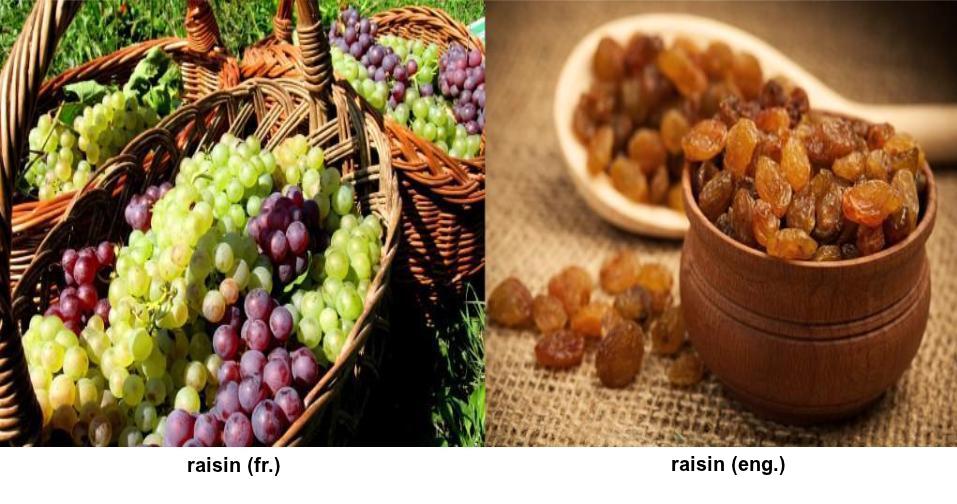 Another tricky fruit to watch: un raisin is a grape. Raisins and sultanas are both called raisins secs, or dried grapes – which is logical because it’s what they are, but it does make for linguistic confusion.

French false friends can be a bit intimidating at first. However, making funny mistakes is just part of the learning process. Many of these silly slips ups tend to get a big laugh from native conversation partners. As you probably noticed, some mixed up words could cause a real scandal! The further you progress in your French language learning, the better you will come to know these common French false friends. Beware, though: there are plenty more out there!

The more you expose yourself to the French language, the more these faux amis will make themselves apparent—however, they’re not always immediately obvious unless you’re also able to see the English translation.

Resources which allow you to see both French and English are ideal for detecting them, such as books, audio transcripts and video subtitles that contain parallel text. On the video-based language learning program FluentU, authentic French video clips are paired with dual-language transcripts and interactive subtitles that make it easier to spot false friends and other language differences.

The best advice when learning French vocabulary is to not fret over possible mistakes – simply learn all you can, lighten up, and learn to laugh at yourself whenever this tricky language happens to trip you up!

Maureen is a Vermont native and serial expat. She has a lifelong passion for travel, scientific research, languages and lizards. Maureen has formally studied Spanish, Italian, Portuguese, and Japanese—and casually absorbed some Kichwa while living 2 years in the Ecuadorian Amazon. She's thrilled to be working with FluentU and sharing some linguistic love with the rest of the world.