21 French Animal Sounds: Can You Neigh, Meow and Bark in Français?

Maybe you need a break from learning to talk to Francophone businessmen, quebecois and hoodlums.

You’re tired of falling in love with Frenchies and sharing their lovely food.

If, all told, you’ve had enough of francophone humans, isn’t it time to learn to speak to animals in the language of Voltaire?

I hereby present you with my list of the 21 animals most worth talking to, accompanied by the noises you should make when communicating with them.

That’s right, French has its own onomatopoeias for animal sounds. And it also has specific verbs that describe making these sounds, just as in English (a lamb “bleats,” a horse “whinnies”).

At times, theses verbs and sounds provide lovely insight into how francophones hear and experience these animals, and sometimes they’re just fun.

French porkers are not happy about their destinies as andouillettes, apparently; the description of their oinks in French is un couchon grogne, literally meaning “a pig grumbles.” The noun for an oink is also une grogne, which also means dissatisfaction.

As the French would have it, “the snake hisses” is said as le serpent siffle. The verb siffler also means “to whistle,” whether with your own lips or a referee’s whistle. I’ve never heard a snake make a sound at all close to this, personally, but they’re possibly the creepiest animals on the planet, so I wouldn’t put it past them.

The world’s languages’ attempts to imitate the sound of a rooster are arguably the most fun words ever invented, and French’s cocorico (cock-a-doodle-do) is no exception. Un coq chante means, literally, “a rooster sings.”

La poule caquète, or “the chicken clucks.” The verb caqueter means to prattle on or gossip, which seems to be a very proper way to describe the yammering of a bunch of chickens.

The chirping of chicks is piou-piou, a word that is sometimes also employed to describe toddlers or babies.

L’âne brait means “the donkey brays,” and as with English, the verb also means to speak or sing too loudly for comfort. But don’t bother trying to explain “I bray” to French people. In an odd fluke, the verb’s present tense only conjugates in the third person singular (as with pleuvoir, to rain). You’ll have to just bray at them instead.

A duck’s noise-making is described as le canard cancane, and the verb cancaner can also mean to gossip.

As for cancan, it is a noun for squawks, gossip and—as in English—the lively 19th-century dancing depicted by Toulouse-Lautrec, pictured below. 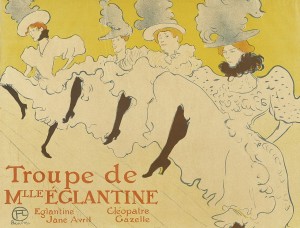 La grenouille coasse, or “the frog croaks.” Be careful what sweet nothings you whisper to your imagined prince-to-be, however, as the verb coasser also means to gossip about or bad-mouth someone. French frogs are apparently not to be trusted with secrets!

Le corbeau croasse means “the crow caws.” And yes, both the onomatopoeia and the verb are confusingly close to those used for frogs, even though the sounds that the two animals make are quite different.

La vache mugit, or “the cow moos.” Strangely, the verb mugir is also used to describe the wailing of sirens. Perhaps not surprisingly for a country so obsessed with cheese and dairy, French has an endless supply of expressions involving the word vache (cow).

A few you should know are:

And, finally, the expression that all French learners fear:

Le pigeon roucoule (the pigeon coos) is how you can describe a cooing pigeon. While the French don’t agree with us about the consonants spoken by pigeons and doves, they do agree that the sounds are soft and agreeable.

Thus, roucouler can be used in a figurative sense in the same way as the English verb “to coo”: Les amoureux roucoulent (The lovers coo.)

L’abeille bourdonne means “the bee buzzes.” As in English, other things can also buzz: la machine bourdonne (the machine buzzes). And, if you have the misfortune to experience a French heavy metal concert, afterwards you can say that your ears are ringing (literally: buzzing), “J’ai les oreilles qui bourdonnent.”

Those of us not adept at identifying particular kinds of bird can chirp at fowl generally with cui cui. When you do so, tu gazouilles (you are chirping). Babies are also said to gazouiller, or babble.

Le cheval hennit (the horse whinnies) with a hiiiiiiii in French-speaking lands.

Le lion rugit (the lion roars), and as in English, the French are also known to rugir de colère (roar with anger) in certain situations.

Le dindon glougloute (the turkey gobbles) is how a turkey makes noise in French. In human circles, you’re likely to hear the phrase être le dindon de la farce (to wind up the laughing stock), as un dindon isn’t just a male turkey, but also a fool, an idiot, a dope.

The greatest piece of French literature ever written, in my very personal and not widely shared opinion, is Georges Feydeau’s farce “Le Dindon,” which has been translated—obviously with some difficulty—as “Sauce for the Goose” and “An Absolute Turkey.” A better title translation might have been “The Complete Moron,” don’t you think? I’d of course recommend just reading (or better, watching) it in the original French.

Dogs, we all know, have a lot to say, and Francophone canines are no different. Un chien aboie (a dog barks), clabaude (barks when it’s not supposed to during a hunt), glapit (yelps), grogne (growls), gronde (gives a low growl), hurle (howls), and jappe (yaps, yips).

Note particularly the useful clabauder; Outside of dog hunts it can be used to mean speaking out of turn or protesting when it’s really not necessary.

Know that when a crocodile snaps its jaws shut around your flesh, the French will hear this sound as clap. The verbs used to describe crocodile communication are lamenter and vagir.

We seem to be missing a verb for goat speech in English, but in French, un chèvre béguète. If you’ve spent any time in a French cheese shop, you know that goat cheeses are also called chèvre. If you haven’t, what on earth have you been eating?

Mose Hayward is a polyglot and has lived in Paris for more than a decade. He blogs about "20-minute fluency," drinks, dancing, and romance for travelers at TipsyPilgrim.com.