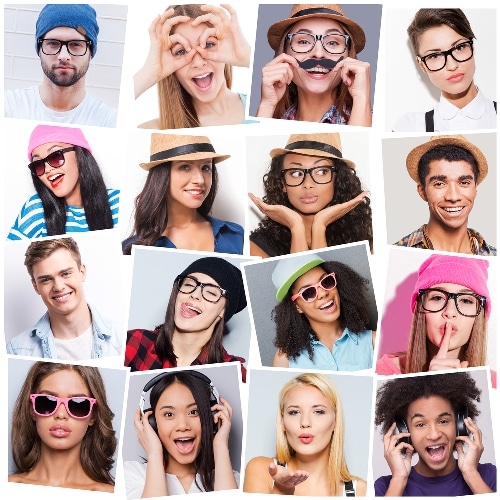 34 Emotional Words and Phrases to Express Your Feelings in French

Get nice and comfy on the couch and perhaps find some tissues.

It’s time to let go of those insecurities and let down your shield.

Your French feelings, that is.

We’re mostly talking about adjectives here, and they just so happen to be about your emotions.

So get real comfortable with your inner self, because we’re going to learn these emotional adjectives and phrases so your French conversation skills can be as emotive as these French films, plays and young adult fiction books.

French Feelings: Agreeing the Adjective to the Subject

Before we get started revealing how we really feel, there is one quick topic we need to touch on. You see, the main thing about adjectives (emotional ones included) is that they abide by subject-agreement rules. If you aren’t already familiar with the rules, let’s do a brief run-down:

Depending on what your subject is, you may need to agree the ending of your adjective with it. When you’re done, everything should be matchy-matchy.

As an example, we’ll use the adjectives gêné (embarrassed) and heureux (happy):

These are the most common endings you’ll see when dealing with our emotional adjectives, but there are more out there (of course). For a comprehensive guide on how to agree your adjectives, check out this post.

Keeping in mind that I won’t be able to provide you with every single French feeling word in the books, here are a few resources for you to learn and practice with on your own.

34 Emotional Words and Phrases to Express Your Feelings in French

Phrases to Ask How Someone Is Feeling

Whether you’re seeing your friend is having a rough day, checking in on your French grandma or wanting to ask how someone is doing in general, there is a phrase for each occasion:

Meaning: How are you?

Going from most formal on the left to least formal on the right, you’ve likely heard these questions tossed around in most French language settings. It may not get you the most detailed response, but it’s a general way to ask how someone is doing.

Hopefully you don’t have to exercise this one too much. It’s best used when someone has that “look” on their face… or if they text you an alarming message.

Qu’est-ce que tu as ? is another way to ask “What’s wrong?,” though it can put off a more aggressive tone like “What is WRONG with you?” So use it with discretion.

Meaning: How are you feeling?

You may not come across this one unless you’re a doctor asking a patient, or a patient being asked by a doctor. Nevertheless, it’s good to know the context for this phrase and our favorite “feeling” verb sentir (to feel).

Meaning: Why are you sad/happy/disappointed/etc.?

If you’re a busybody, or just a well-meaning friend who wants to know more about people’s emotions, this is a good phrase to know. You can also use the formal sense and say “Pourquoi êtes-vous ~ ?”

Expressing Your Own Feelings

There are three main ways to express your emotions:

This one is pretty straightforward, and lucky for you, common. Just insert your current emotion (make sure to agree it to your gender), and bam! you’ve just shared your feelings.

This is another common way to express how you’re feeling. Once again, you plug in your emotion after the phrase. If this looks funky to you, have no fear, it’s just a reflexive verb. (If you’re not there yet, then just concentrate on remembering the phrase for now.)

Some emotions in French use a construction with avoir instead of être. You may have seen this before with “J’ai faim” (I’m hungry, or literally, I have hunger). Here are a few examples of this:

These adjectives (or states of being, in some cases) are pretty common. You’ll likely see them in your French studies on a regular basis, or at least feel them every now and again… unless you’re a robot. Get out of here if you’re a robot.

Elle est contente/heureuse d’avoir un nouveau chien.
(She is happy to have a new dog.)

These two adjectives mean essentially the same thing, though heureux is generally considered to be a more intense expression of happiness than content. Content can also mean “satisfied.”

I’ll tell you what’s not sad—this adjective is the same in both the masculine and feminine form, making it an easy one to remember.

Whenever you feel like you’ve had enough, bring this one out. Énerver is also a verb, meaning “to annoy,” making Ça m’énerve ! (That gets on my nerves) another great way to express your irritation.

While pressé can also be used to describe a cold-pressed juice, or un jus pressé, it’s a common way the French express that they’re in a rush. You can also use “C’est pressé !” to signify that something is urgent. Technically, I cheated here and this isn’t an emotion, but sometimes… hurried is about the only thing you’re feeling.

It’s really up to your personal preferences which one of these you want to go with. But, if you’d like to say that something is making you angry, use the construction mettre en colère.

You can use it like this: Tu me mets en colère (You’re making me angry!). But for now, let’s keep our voices down.

Avant mes vacances, j’étais trop fatigué(e).
(Before my vacation, I was so tired).

You’ll use this one a lot as you spend late nights studying up on your French (right?). Think of the English word “fatigued” and you’ll never forget it again!

Meaning: to be bored

This technically isn’t an adjective, but rather a pronominal verb. If you’re familiar with the word “ennui” to describe boredom in English, this is another easy one to commit to memory.

While it’s not exactly an emotion (though it may crop up during emotional situations), it’s the best adjective to know for getting out of plans in order to stay home and watch French TV instead. Bonus: Remember it by thinking of “occupied.”

Il était navré après avoir perdu ma voiture.
(He was sorry/distressed after he lost my car).

You may know désolé(e) as the French word for sorry, and you’re right in thinking that! Navré is a more serious expression of regret and distress, whereas désolé(e) is used on a day to day basis to apologize for things like bumping into someone’s shoulder or forgetting their name.

Épuisé: for when fatigué won’t cut it. When talking about an item at a store, you can also use épuisé to express that it’s out of stock or sold out.

Got a malady, eh? Well malade is your French word for good ole “sick.”

Here is another feeling word in French that can be used as both an adjective and a verb. S’inquiéter means “to worry” and since it’s a pronominal verb, can be used like “Je m’inquiète” (I worry).

Nous sommes ravis d’avoir gagné!
(We are delighted to have won!)

For when you’re beyond content and heureux, ravi is the perfect word. So get delighted, because you’re one step closer to getting in touch with your French feelings.

Cognates to Boost Your Vocabulary

A cognate is something that sounds similarly and has the same meaning in French and English. They’re one of the best ways to boost your vocabulary, and emotions are no exception.

Here’s where things get fun. In short, an idiomatic expression is something that basically doesn’t make any sense when you translate it, nor does it really make that much sense in the native language. Think “raining cats and dogs” or “crying over spilled milk.”  Here are a few French idioms to get clued into:

Meaning: To be bummed out
Literal translation: To have the cockroach

Bet you could have guessed which one of those is the literal translation and which is the idiomatic meaning! Though this could get confusing if you happen to be looking for a cockroach with a group of people.

You’d have to be pretty angry to become a goat. But just in case, here’s how to conjugate devenir. Hmmm, maybe this is related to “That really gets my goat!” in English.

Meaning: To be terrified
Literal translation: To have a blue fear

To conjugate this, much like “J’ai faim,” you would say “J’ai une peur bleue.”

Meaning: To be hungover
Literal translation: To have the wooden face

Hopefully you will never have to use the literal translation for this, but I’m sure a hungover Pinocchio would have found it appropriate.

Meaning: To be energized
Literal translation: To have the potato

This one may not make much sense to those who find potatoes synonymous with couches, but hey, apparently having the potato is a good thing in French.

For more idiom fun, and not just my personal favorites, check out this post, this post, oh and this one too.

Now you know everything you need to know to be a therapist in France.

Just kidding, but you can be more specific the next time someone asks you “Comment allez-vous ?,” as well as better understand what’s going on when someone unloads their emotions on you in French.

Now all that’s left to conquer is how to talk about your love life.

Do You Know the Difference Between “Quand” and “Lorsque”?
Your Complete Guide to Professions in French: From Common Job Names to Formal Titles and Abbreviations