Être vs. Avoir: A Complete Breakdown of 2 French Superverbs

An ongoing battle of wills between French verbs être (to be) and avoir (to have).

Être and avoir may engage in some friendly sparring from time to time, but they’re not enemies.

The true battle is learning when one is used over the other, and what specific rules govern their actions, and that’s what we’re going to cover in this post.

Être and Avoir: The 2 Most Important Verbs in French

If you haven’t realized it yet, these two verbs are not only perhaps the most commonly used French verbs, but they’re infinitely useful in creating French’s compound verb tenses.

For starters, on their own, the verb être means “to be” and the verb avoir means “to have.” These two verbs are used in this simple sense to say things like je suis professeur (I am a teacher) or elle a une tasse (she has a cup).

However, these two verbs are much more complex than that, and their relationship to other verbs and each other is an interesting one.

In addition to already being very common verbs in the French language, these two verbs have very distinct functions outside of their simple meanings. Primarily, when used in conjunction with other “main” verbs, these two verbs are called “auxiliaries” and they create French’s many compound tenses.

Être and avoir’s roles as auxiliaries will be the primary focus of this post. But before we get into that, let’s be practical and confront conjugation.

Unfortunately for learners, these two verbs are pretty irregular. But once you know the present tense and the stems, they’re fairly simple to conjugate in l’imparfait (imperfect past) and le futur simple (simple future).

How to Conjugate Être

Let’s start with être. These are its conjugations in the present tense:

And the imperfect, with the stem ét-:

And the simple future, with the stem ser-:

How to Conjugate Avoir

While these aren’t all the verb tenses, these are pretty common ones. Note that the same stems for the futur simple are used for the French conditional moods. There are also special conjugations for these two verbs in the subjunctive.

The irregular past participles été (être) and eu (avoir) are used in the passé composé (past perfect), and both verbs take avoir as an auxiliary verb for compound tenses.

This is all a lot to memorize, so keep in mind that what will really cement these conjugations in your mind is practice and exposure to them in some actual context. You can do this on FluentU, where the verbs will come to life in authentic French videos like movie clips, music videos, interviews and other native French content. 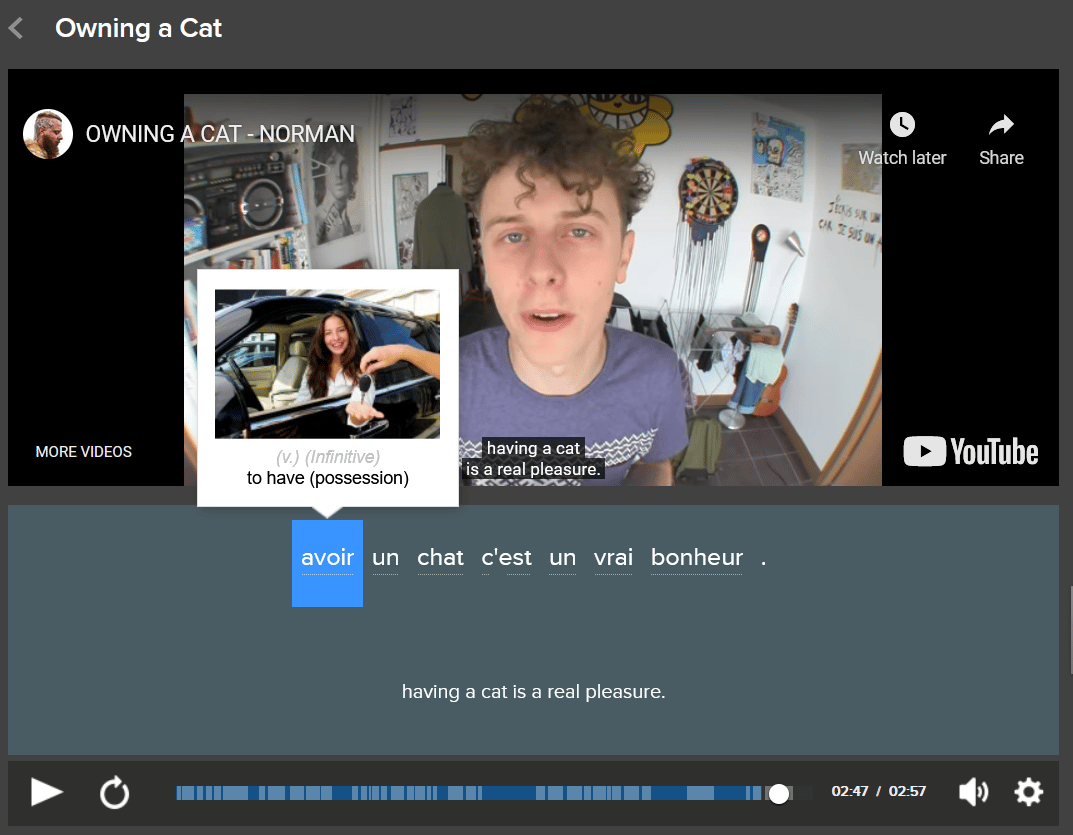 Plus, when you search for either verb in the FluentU program, you’ll see their different definitions as well as common phrases where they appear. Each of these definitions is an individual flashcard, so you can add them all to a flashcard deck and practice using them correctly in different contexts. Similarly, you can search for specific conjugations of the verbs for a more focused approach to studying them.

Flashcards on FluentU have example sentences and clips from FluentU videos where they appear, so you can see many different examples. Plus, you can practice flashcards with personalized quizzes that’ll learn your weaknesses and give you questions to target them. Hop on to the iOS or Android app and you can continue your learning with the addition of pronunciation practice thanks to speaking questions.

Now, take a look below at how to create the passé composé for all the other French verbs using these two verbs as auxiliaries.

Être vs. Avoir: When Should Each Be Used as an Auxiliary?

As previously stated, while these two verbs are very common, they have specific, rule-based usage outside of their standard “to be” and “to have” meanings. Because of this, there are situations where être must be used and others where avoir must be used, and no mixing is allowed.

For example, while both verbs are used as auxiliaries for compound verb tenses such as the passé composé, the rules for which one must be used are very rigid.

These two verbs also have very specific functions of their own outside of their auxiliary use, a few of which we’ll touch on later as well.

In compound verb tenses, both verbs come before the main verb (or the participle) and conjugate directly with the subject:

The two examples above are in the passé composé.

When to Use Avoir as an Auxiliary Instead of Être

When to Use Être as an Auxiliary Instead of Avoir

Again, most verbs take avoir as an auxiliary in a compound tense.

Monter (to climb)
Rester (to stay)
Sortir (to leave)

Here’s an example of a reflexive verb in the present and past tenses:

You can see that the past tense conjugation uses être.

Also know that our two verbs can be used as auxiliaries for many other verb tenses such as le plus-que-parfait (pluperfect), le conditionel passé (past conditional) and le futur antérieur (the future perfect). These auxiliaries follow the same general rules as the auxiliary rules for the passé composé.

Here’s a quick look for comparison:

While it’s one thing to know when to use être and when to use avoir as an auxiliary, knowing how else être affects our sentence is another.

Elle est allée au magasin. (She went to the store.)

Be careful, though! This agreement happens only with être and never with avoir.

Être and Avoir Auxiliaries with a Direct Object

In that case, the verb takes avoir as an auxiliary verb:

In this case, the first sentence uses être because there is no direct object, but in the second case, because le livre is following the verb, this DR MRS VANDERTRAMP has to take avoir as an auxiliary. Seems simple, right?

Well, what happens if a reflexive verb has a direct object? In a classic case of French rule exceptions, the auxiliary for these verbs will still be être, but no agreement will be made on the past participle.

And just like that, we’re done with the compound tenses. Despite those being such a huge topic, it’s also useful to know that avoir is used in a number of idiomatic expressions, as long as we’re on the subject of usage. For example, avoir can be used to talk about age, hunger and thirst.

Vous avez soif ? (Are you thirsty?)

Further, the fixed expression il y a means “there is/there are,” but it uses avoir.

Il y a un livre sur la table. (There is a book on the table.)

Il y a des policiers à l’école. (There are police at the school.)

As with avoir, there are specific uses and rules for être. For example, when être is used to talk about one’s profession, no article precedes the following noun.

Nous sommes étudiants. (We are students.)

Elle est contente. (She is happy.)

Nous sommes contents. (We are happy.)

Keep in mind, however, that these are just simple adjectives. There are loads of other adjectives that don’t follow this rule, but change differently according to the gender and number of the subject.

Feel like you got a hold on when to use être and when to use avoir? Well, now you need some practice to keep it from being an uphill battle!

You can use the following resources to practice être and avoir:

Start with ToLearnFrench and ProProfs for a simple conjugation quiz of both verbs.

Lastly, try Lingolia for a quiz that combines the present tense and the passé composé.

Pretty soon, it’ll seem like the battle between être and avoir is no battle at all!

These two superverbs are used all the time, so it’s critical to know exactly when and how to use them.

And that knowledge will certainly come with time and practice, so keep up your diligent studies. After all, there are plenty of other French verbs to learn and master too!