How to Master French Gender Rules in a Nutshell

Oh, the woes this question has brought you and every other French speaker out there.

Having a conversation? You need gender agreements. Brushing up on vocab? Better know the nouns’ genders.

Why Gender Is So Important

If your native language doesn’t have grammatical gender, then your big question may be “Why?” before “How?” Why are some nouns boys and others girls? How can a noun have a gender? Surely they don’t have the anatomy to make a distinction?

Allow me to explain the insanity.

Bear with me for a moment as I take us back—way, way back to the origins of our modern languages.

Linguists have inferred that thousands of years ago there was a language called Proto-Indo-European (well, people didn’t call it that back then, but we do now). It’s believed that PIE originally made distinctions between nouns that were animate and inanimate. The animate nouns eventually branched off into masculine and feminine, and the inanimate into a neuter classification.

So blame your caveman ancestors for the extra work. English, spawning from PIE after a long saga of evolution, came to drop grammatical gender. French only dropped the neuter gender, and so here we are.

But…but…can’t we just fudge it? Who cares if we get it right? What about gender equality? Nope, it’s still important, even if it seems arbitrary that un pull (a sweater) is masculine and une lampe (a lamp) is feminine, you need to know it if you’re serious about French.

When You’ll Use French Gender

First things first, when you learn a French word, you’ll see it paired with either its definite or indefinite article.

The indefinite articles or “a/an” in English:

The definite articles or “the” in English:

The partitive articles or “some” in English:

In addition, you’ll need to know the gender in order to determine which pronoun to use. For example, when choosing personal pronouns Il (He) or Elle (She). Use these when describing what a noun does.

Then there are the adjectives, which have different spellings or pronunciations depending on the gender of the noun to which you’re applying them. And of course, for you time traveling connoisseurs, there are the gender agreements found in the perfect tense and all of its grammatically derivative compound tenses.

What’s the message here? When you learn vocabulary, don’t forget to learn whether it’s a skirt-wearing, pink-loving feminine noun or a roughhousing masculine noun!

How to Conquer French Gender Rules in a Nutshell

Most French teachers and fellow French speakers will tell you that there’s no rhyme or reason to whether a noun is masculine or feminine. While there’s some truth to this, largely due to the long-term evolution of the French language, there are some rules (and exceptions) to get most nouns on lock.

Remember that your instincts about a word may not always be correct, for example le féminisme (feminism) is masculine and la masculinité (masculinity) is feminine. Makes total sense.

Look at the Ending

This may be the most effective way to determine the gender of a noun when you’re stumped. Of course, the best method is just memorizing the gender when you learn the noun but, hey, nobody’s perfect.

Here’s a list of common endings for both masculine and feminine nouns, but keep in mind that these rules only apply around 90% of the time. Those are good odds, and French natives even have trouble with those pesky exceptions.

If it ends with_____it may be masculine.

Most nouns that end with a consonant will be masculine. Keyword: MOST.

Nouns that are derived from a verb—referring to something or someone carrying out that verb’s action—typically use the ending -eur, and will be masculine.

Nouns that are derived from adjectives and end with –eur are feminine.

Nouns That Go Both Ways

Although (sad face) there are exceptions to these rules as well. So many exceptions! So many! Some nouns for animals refer to both genders.

Wouldn’t it be nice if French just didn’t have exceptions?

This is another category that employs some logic.

Most job titles have both a masculine and feminine form. Many of them started out as exclusively masculine words because, back in the old days of soul-crushing sexism, only men held those jobs. As the years went on and women began to work a diverse array of jobs, more and more of these job titles took on feminine forms.

This isn’t all without politics of course. Many people argue that it’s more sexist to have separate job titles for men and women and not just one word for the job title. Either way, here are some examples of the masculine and feminine forms:

The Rules of Agreement

Gender agreements are important in both conversation and writing. The gender of a noun can change the adjectives applied to it and some verb tenses, not to mention it’ll determine which pronouns to use.

This is the most common way adjectives are modified for gender and quantity.

If the masculine form of an adjective ends in an unaccented –e, then the feminine form is the same and only an -s is needed for plural forms. Example: triste (sad), triste, tristes, tristes.

If the masculine form of an adjective ends in –l or –n, then you make it feminine by doubling the consonant. Example: bon (good), bonne, bons, bonnes.

If the masculine form of an adjective ends in -er or –et, then you’ll add an accent for the feminine. Example: cher (expensive), chère, chers, chères

If it ends in -c, then –che is the feminine ending. Example: blanc (white), blanche, blancs, blanches.

If it ends in -eux, then –euse is the feminine ending. Example: amoureux (romantic), amoureuse, amoureux, amoureuses.

If it ends in –f, then -ve is the feminine ending. Example: actif (active), active, actifs, actives.

If it ends in -eur, then –euse is usually the feminine. Example: menteur (lying), menteuse, menteurs, menteuses.

So irregular they don’t have a category:

These have no rhyme or reason, but you’ll find yourself using them often. These are listed in the order of: masculine, masculine before a vowel, feminine, masculine plural, and feminine plural.

Luckily this part is pretty straightforward, no weird irregular endings for the feminine form.

Be aware that with some verb tenses, you’ll need to be certain about what gender your noun is in order to correctly conjugate.

In the perfect tense and other compound tenses (such as the past perfect and the past conditional) when you use être as your helping verb, you’ll need to make an agreement with your subject. Usually this is straightforward because the subject is either je, tu, il, elle, nous, vous, ils, or elles. If a noun is your subject, make sure you’re certain of its gender so you can make the proper agreements.

Here’s an example using the past tense of aller (to go):

The endings stay the same for each verb, and the rules are the same if the subject is say, une lampe, and not a personal pronoun. Just don’t forget to agree.

In addition, when you have a direct object in the past tense and are using the helping verb avoir, then you’ll have to make the verb agree with the direct object. It’s also important to know the gender in these cases. Here’s an example:

Since the direct object in this sentence was feminine, you have to agree the verb. The endings are the same as when you use the helping verb être.

The good news is that by reading, listening carefully and practicing, noun genders and agreements will become second nature to you.

Cracking open a book is one of the best ways to learn vocabulary and, in turn, subconsciously learn your he’s from your she’s. You can even get away with reading comic books or magazines.

For intermediate learners who have developed an ear for subtleties in the French language, watching films or using audio resources can help increase your overall fluency.

And learners of any level can use a program like FluentU to see French gender rules being applied “in the wild” in native French speech. That’s because FluentU has many authentic French videos like movie and TV show clips, news segments, interviews, vlogs and more. 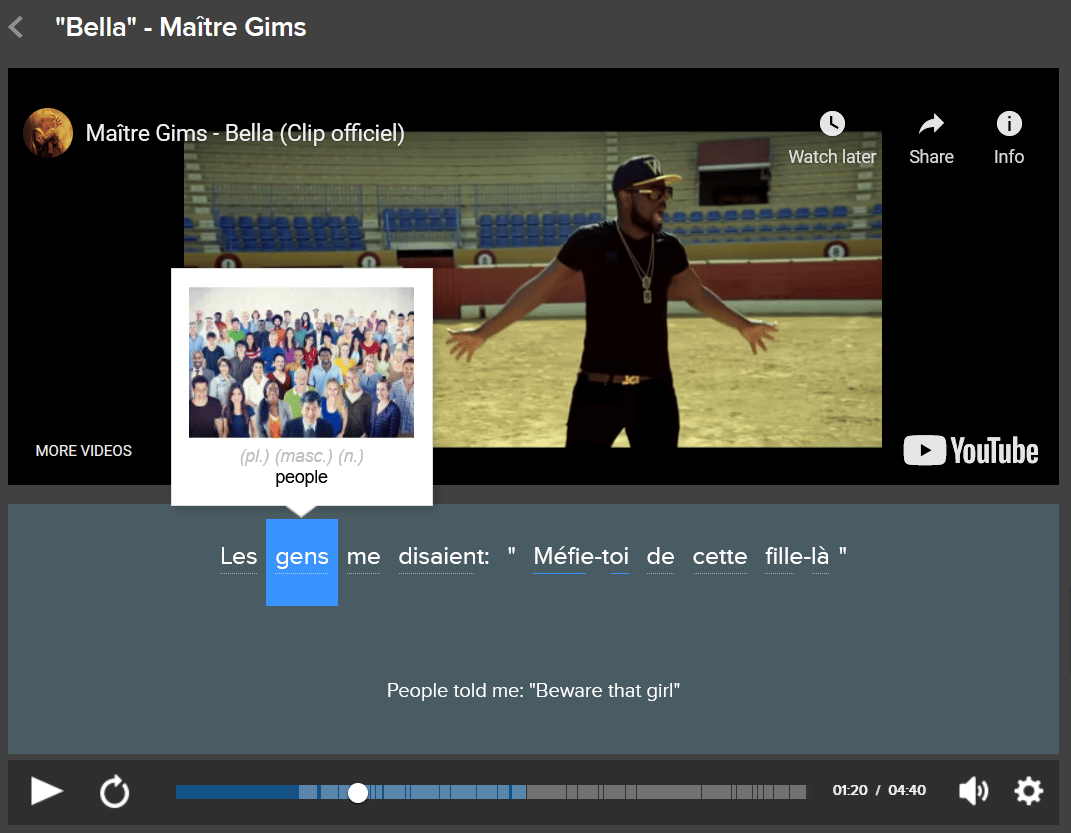 And since each video has interactive subtitles, you can check the meaning of any word with a click. This means you can easily see the gender of a word, its definition in the context it’s being used in, example sentences and videos and an option to save it as a flashcard for review.

Save words you struggle with into a flashcard deck and practice them with the personalized quizzes on FluentU. Or download the iOS or Android app for the inclusion of speaking questions, which let you practice pronunciation, as well.

Before you know it, you’ll actually hear the difference between la and le in fast-talking films without straining your ears.

And of course, we’re all looking for excuses to play games and donate rice. Right? This website lets you answer questions about different subjects (including French), and with every question you get right, ten grains of rice are donated to people in need. A lot of the questions are vocabulary questions, including the gender of the noun in the question.

As you delve into the fun world of the past tense, pronouns and compound tenses, you’ll find the gender of your nouns becoming more and more important. There may seem to be no sense to it—and often there isn’t—but it’s something we French speakers must try to conquer, both beginners and fluent speakers alike!