Did you know that you were already semi-French before actually deciding to learn the language?

While a majority of English words with French roots have morphed, changing through spelling and sound, there are endless everyday words that have remained purely French as part of the English language. 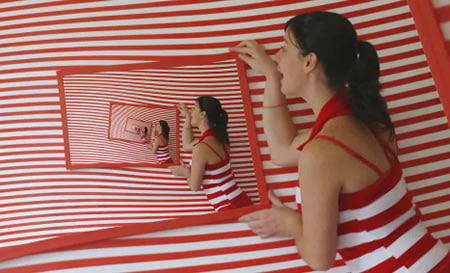 “I’m having déjà vu” has somehow secretly slipped into English to solely describe an inexplicable instance that may have never actually happened.

“Already seen,” is the English translation of the French phrase with which we associate that weird feeling of reliving the same past experience.

In France you’ll hear this word on an daily basis, because it’s used to express “having re-seen” a person, place or things, not in another life or dimension. In other words, it’s a factual encounter.

The French do too believe in the weird phenomenon (of course they do!), but have a different way of spelling it (with a hyphen), déjà-vu. There is no difference in pronunciation though, which is why context is always key! 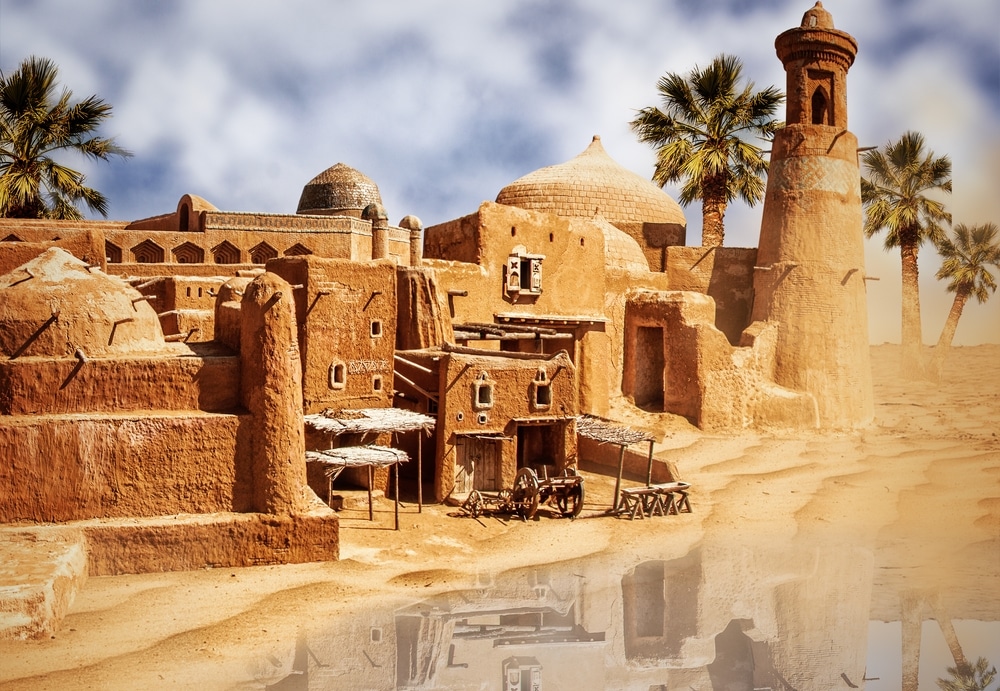 That word we all learn to describe the “illusion” of a cold water fountain in the distance while trekking through a long, hot desert.

To “look at” or “wonder at” is the literal translation of this French word (having Latin roots). It also means to “mirror ” or “admire” in French, hence why English speakers use mirage to define a visual wish or desire.

In a modern sense, mirage is a natural phenomenon caused by atmospheric optics and the sun’s rays that professional photographers use at their disposal to create beautifully, distorted images. Contrary to popular belief, a mirage is not a hallucination or optical illusion, though the French also use mirage as the English do.

J’ai cru voir une île ; c’était un mirage. (I thought I saw an island; it was a mirage). 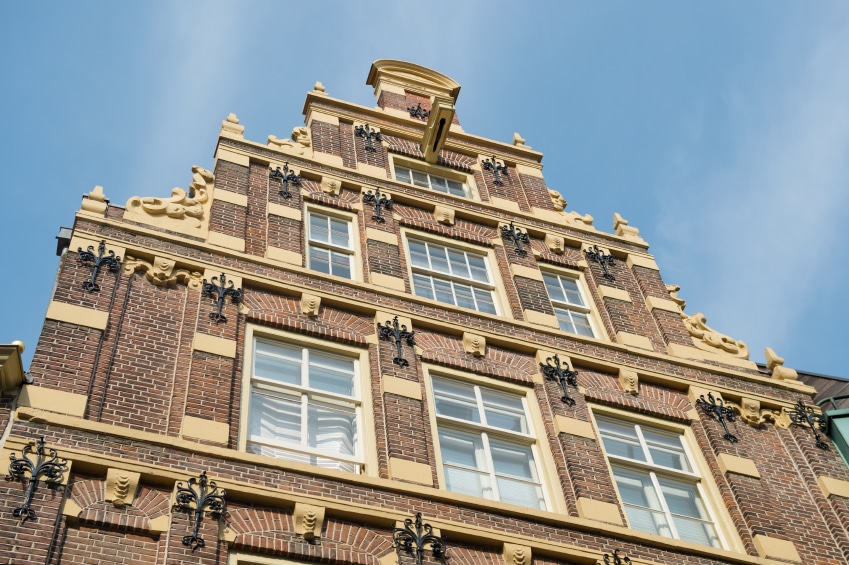 Façade has multiple uses. For one, it’s a fancy word in English for telling someone they’re “fake,” or more nicely, “putting up a front.” “Frontage” or “face” is the literal English translation of this French word, but not exactly a person’s face, as figuratively used in English.

“Face” [fas] in French is the word for “face” in English, so we see where the English picked up that figure of speech, but “visage” in French literally describes the body part of a person’s “face.”

More commonly, in both English and French, façade is the “front” or “side” of a building, while the expression “en face” means “in front of.” 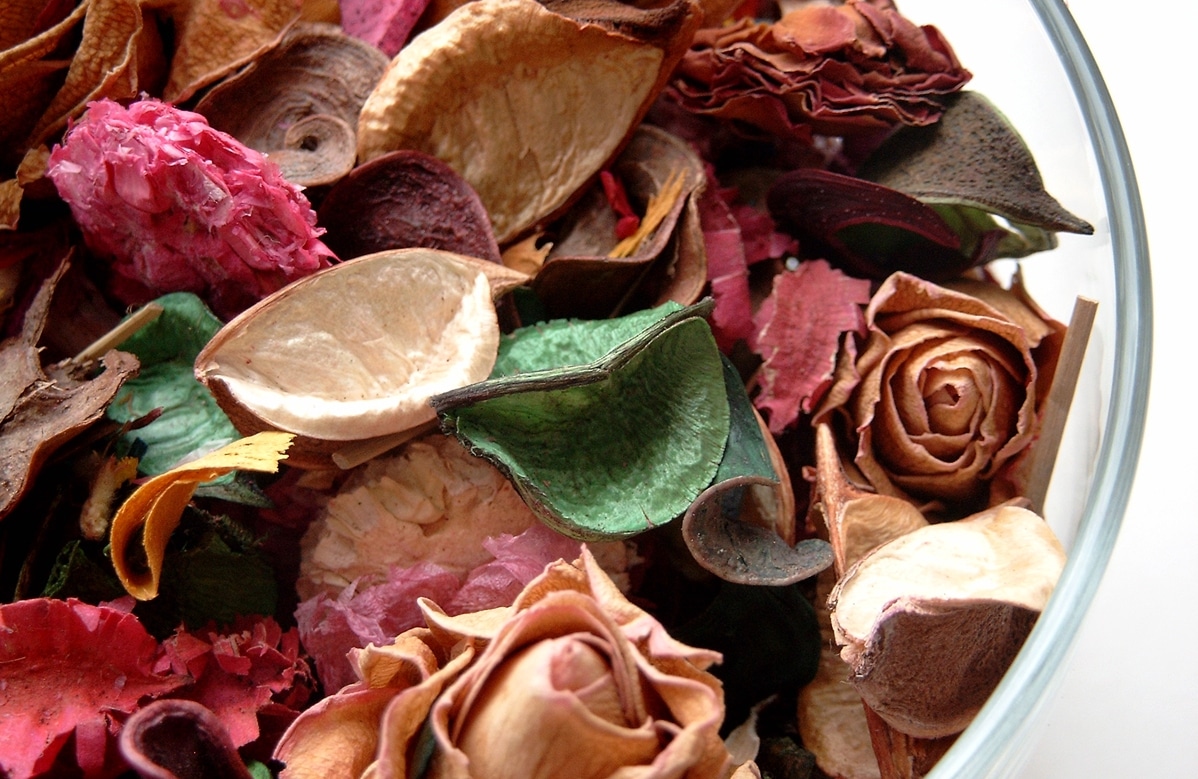 Pot-pourri translated into English is…drum role… “rotten pot.” In French it’s spelled pot-pourri or pot pourri, and has the same meaning as its English counterpart: fragranced dried flower, fruits and herbs used to get rid of bad odors.

Some, mostly women, place pouches of potpourri in their drawers and “armoires” (another French word) to keep clothes smelling fresh—yes, leave it to the French.

It’s also the French word for a Spanish stew made in Burgos (olla podrida), made from a large variety of ingredients—which explains the other English definition of potpourri: a collection of diverse items. 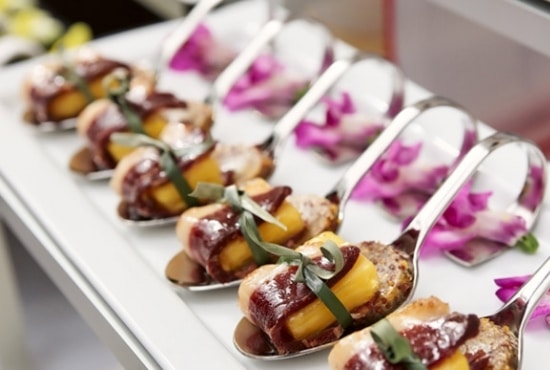 A favorite French phrase that gets our appetite going (oh hey, “appetite” is another French one, appétit!), to us English speakers, hors d’oeuvre screams lavish parties and cocktail hour.

“Out of work” is the literal translation, hors (out) d’œuvre (of work). Historical context: Hors d’œuvre were served before/”out” of the main course or “work” of art (by the chef) and thus, hors d’œuvre was born. The “d” gets contracted to the word “œuvre” due to the French vowel rule, but you should already know that!

Why the contraction? Well here’s a little explanation:

Consonant words such as de, du, le, la, que, je, me, te, ne, se, or ce get contracted with an apostrophe and lose their end vowels when the following word starts with a vowel (a, e, i, o, u, y), a silent H or Y pronoun.

Note: Qui (who) never gets contracted.

And here’s our example:

Note: In French, the word hors d’œuvre is invariable, meaning that it doesn’t take an “s” in the plural! 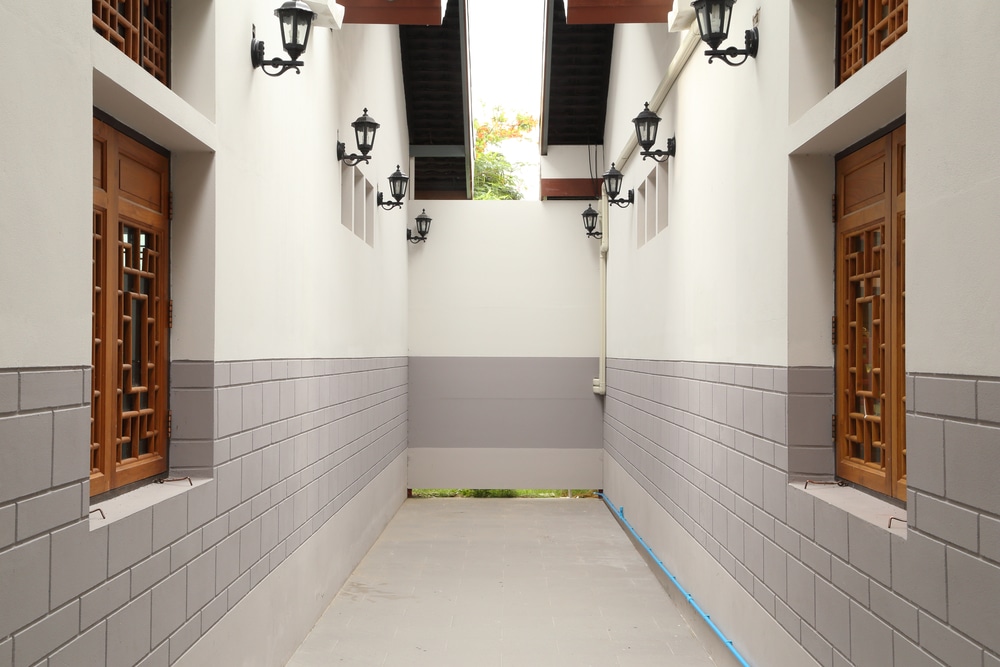 Pronounced [kuhl-duh-sak], is another funny French phrase. “Butt of a bag,” meaning “bottom of the bag,” is the literal translation: cul (butt) de (of a) sac (bag), though the original meaning has nothing to do with how English or French speakers actually use the phrase.

Is it all coming back to you now?

Cul-de-sac, mostly seen in real-estate writing, is an elegant English way to say the “dead end” of a road. In French, the elegant, more formal way to say “dead end” is “impasse,” not cul-de-sac.

Though we try to be, now we know the phrase cul-de-sac is not truly elegant whatsoever, which is a just one of the many created by the French with the word “cul” (butt).

Cette rue a mené à un cul-de-sac. (This road has lead to a dead end.) – Informal 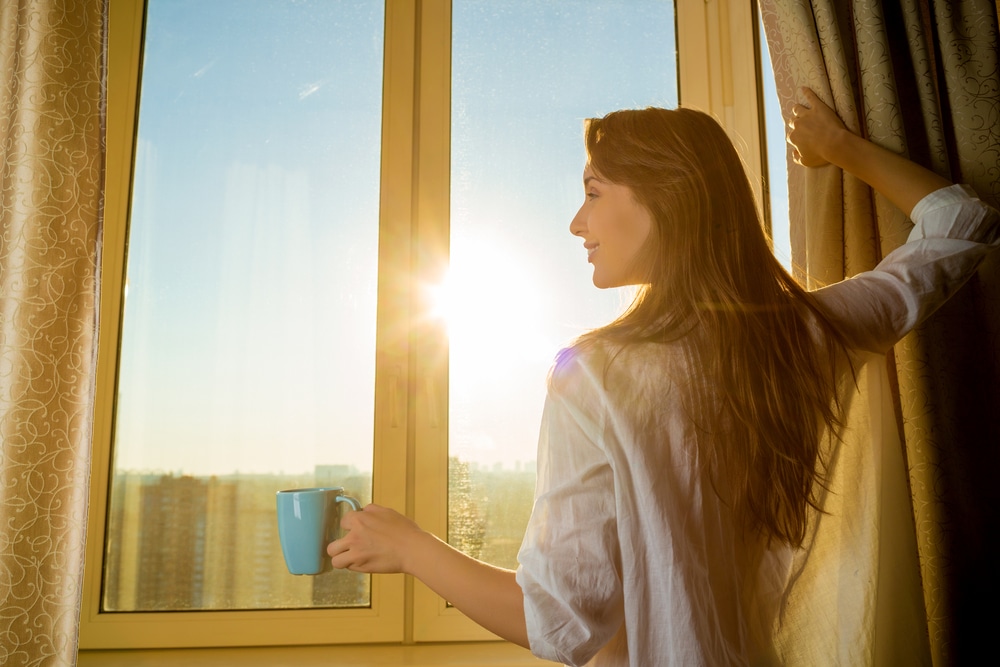 The “first showing” of a movie or spectacle, how much do we love those? They’re affordable and place you on top of a movie critic’s (critiques, another French word) list.

On the French side, matinée, like “matin,” means “morning,” as well as the “entire morning” (from sunrise to noon). While the French might also have their matinée movie deals, for them it refers to the “first showing” in the afternoon, not morning.

Furthermore, matinée in French is also a woman’s “morning” draws, robe or attire (although this term isn’t used very often anymore). For example: 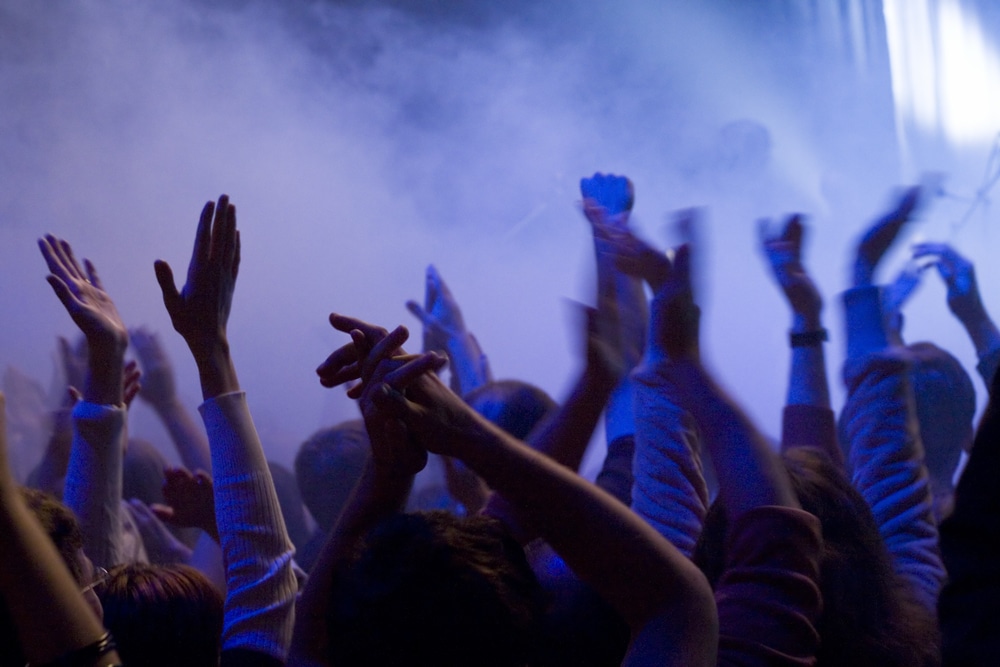 You shout “Encore! Encore! Encore!” while giving a standing ovation, raising both of your hands clasped together to make a single fist, shaking it from left to right.

A phrase English speakers use after an impeccable performance. So good, that you need more, encore!

For English speakers encore is only related to show biz, but in French it’s a daily dose. “Again” or “another” are the literal translations. “Yet,” “still” or “even” are more intricate translations. “Pas encore,” “not yet,” is commonly used too.

En veux-tu encore ? (Do you want some more?) 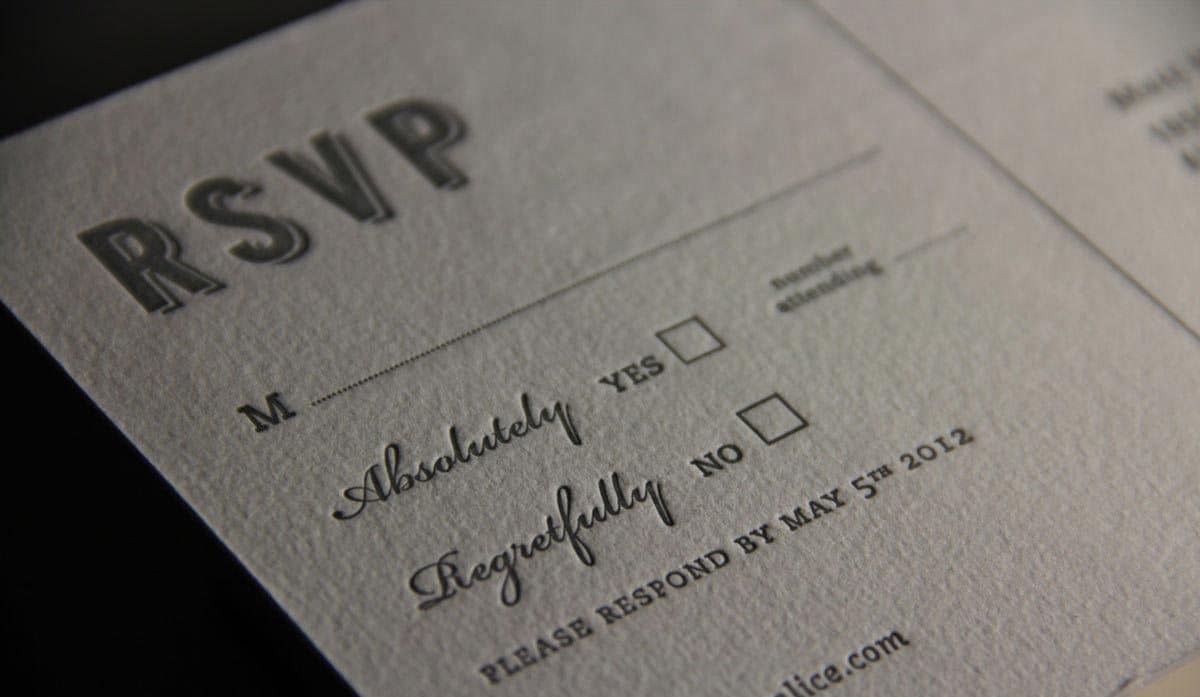 You’ve been invited to countless weddings, showers, sweet sixteens and bat/bar mitzvahs your whole life, but did you ever think about what R.S.V.P stands for? In case you never did, it’s an original French acronym:

“Respond If It Pleases You” or “Respond If You Please,” there we go again with that grammatical contraction. If you’re wondering—nope, there’s no English translation or acronym, we completely stole it from the French. 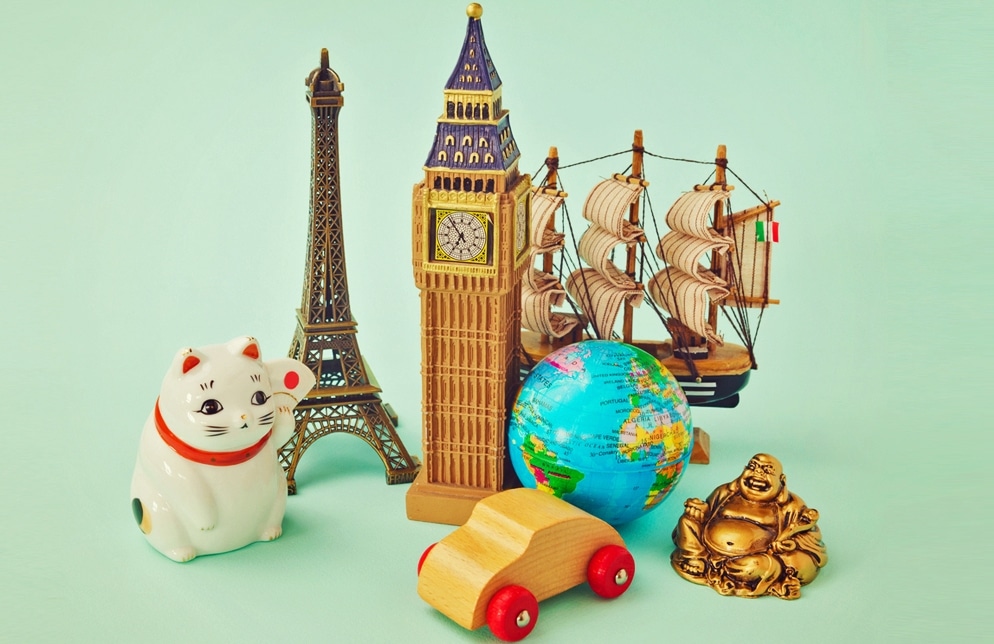 If you’re returning from an amazing trip, you’ll no doubt bring back an amazing gift for yourself or friends, a.k.a. souvenir—a tiny piece of memorabilia.

For English speakers a souvenir is tangible, physical, and visible. For the French too, but not exactly. The verb souvenir also means to “remember” or “recall.” For example:

Je me souviens. (I remember.)

So while the word souvenir in French does describe a physical relic that induces “recollection,” it also defines any old “memory.” 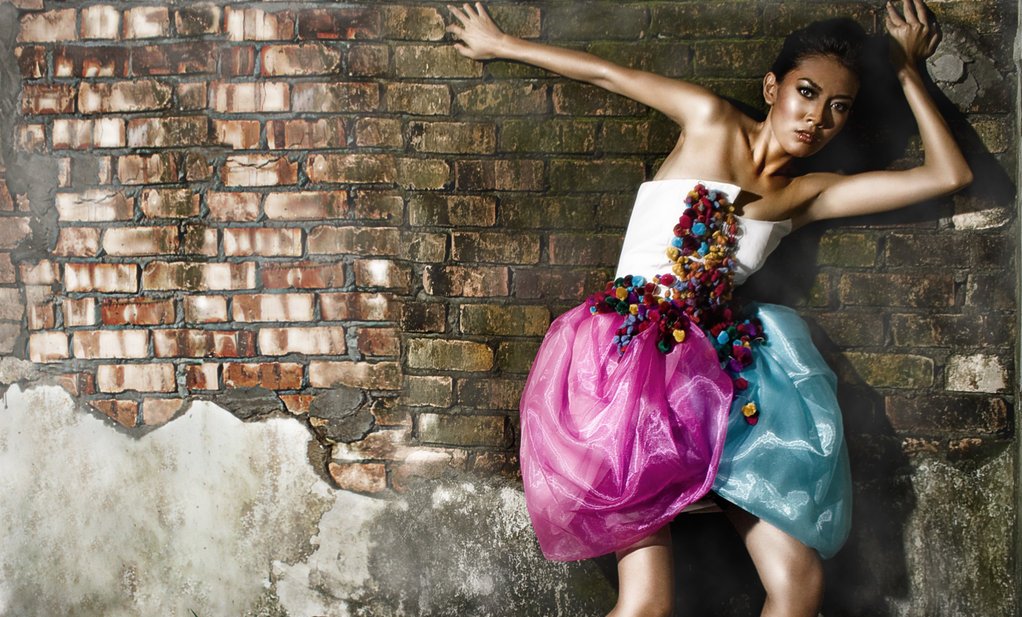 This might be the most borrowed French phrase, not only in English, but in other romance languages like Spanish, Italian, Portuguese and Romanian.

“Before guard” or “advance guard” are the literal translations of this French phrase. The word garde can mean a “guard,” like a body guard, or to “keep” or “save,” as in garder.

Avant-garde, as English speakers know it, defines an innovative movement in the arts, usually pertaining to artists, writers and musicians who are “advanced” in their fields, and the same meaning holds in French.

The French avant-garde also means the “front line” or vanguard—which bears the same meaning in both English and French. 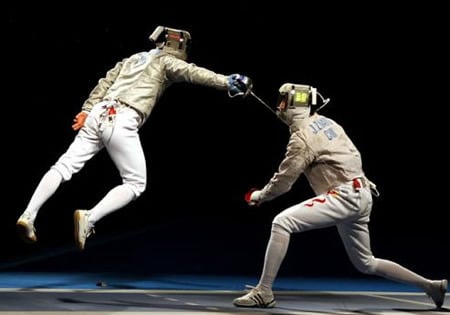 Touché, “I gotch ya” or “nice one,” is how English speakers express the French phrase, usually after a smart aleck remark or quick, witty response. In fencing (or any battling), touché can also be a “hit.”

In French it simply means to “touch,” which is written similarly, but with no hidden meaning as we’ve created. For example:

As-tu déjà touché un serpent ? (Have you ever touched a snake?) 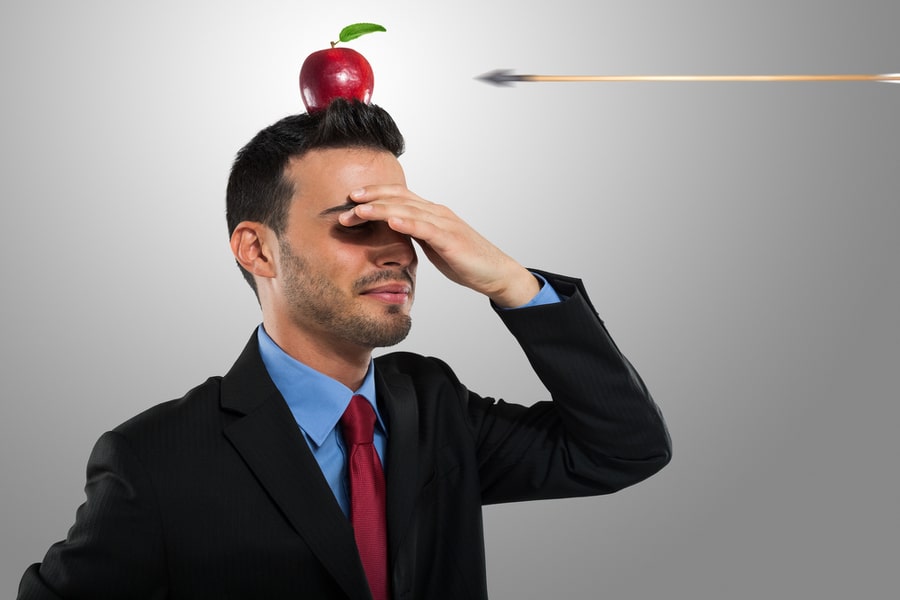 If a woman’s shirt is cut too low your grandmother would say she’s risqué.

Risqué [rees-key] or risque [ri-skey], the latter sounding similar to how we say “risk” in English, are the two pronunciations in French which have the same and only meaning of “risk” in English.

Note that risqué with an accent over the “e” indicates past tense in French, while risque is present. If you want to see the differences in how these two are used, the FluentU program uses authentic French videos to help you learn. You can also practice your pronunciation with the speaking exercises.

Risqué may have moved into English because of Moulin Rouge, cabarets, and burlesque shows, but in French it only means “risk.” Take a look at these examples:

Il a risqué sa vie. (He risked his life.) 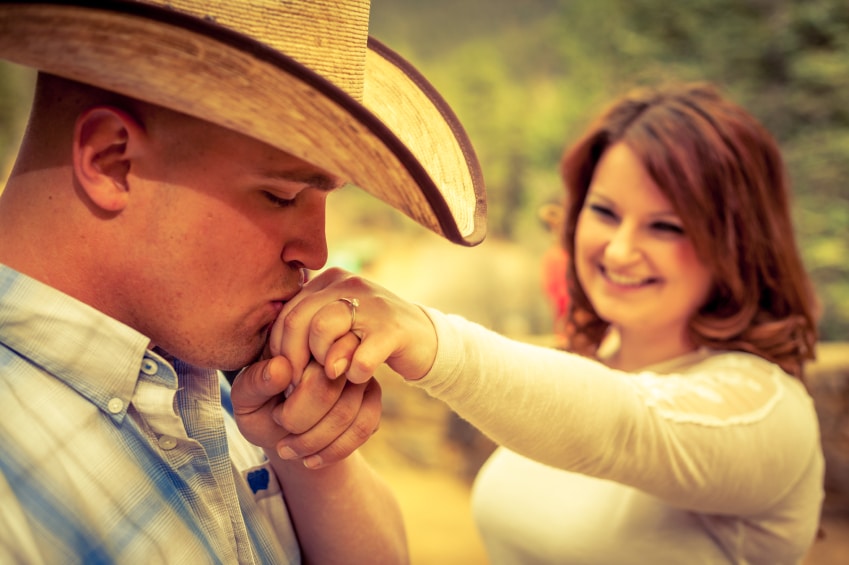 Yes, this is another famous French word that slips by many of us. There is no translation since fiancé is, well, a fiancé. One little secret is the difference in spelling. Fiancé with one “e” refers to a male fiancé while fiancée with two “e’s” refers to a female, because there’s always the masculine and feminine way of writing French words!

Je vous présente mon fiancé. (I introduce you to my fiancé.) – Male 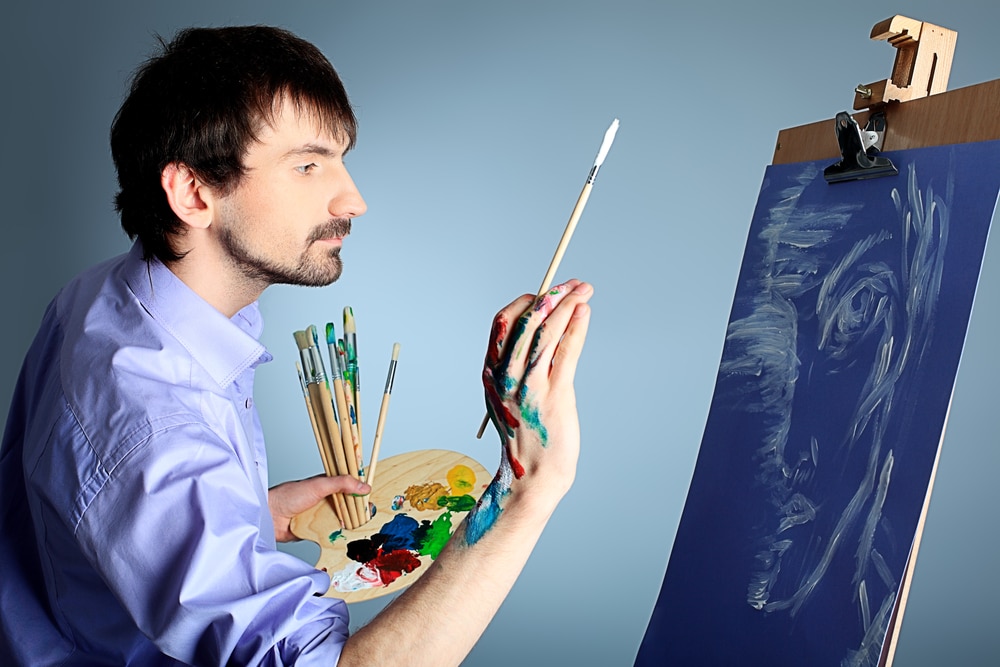 During wartime, coup-de-grâce meant a person’s “final blow,” “strike of grace” or “blow of mercy” at the stake of a sword or rifle in a graceful, peaceful manner.

“Cut of grace” is the literal translation, though us English speakers, as well as French speakers, use coup-de-grâce in figure of speech to describe a final, “last stroke ” of a paint brush or a business’s fate in the future, sort of like the cherry on top.

And there you have it, a few French phrases that are officially part of the English language. Can you think of any more?