Time Traveling in French: The Essential Guide to the Grammar Rules of Past Tenses

Is there anything cooler than time traveling “Back to the Future” style?

And how are you going to time travel to the past in French if you can’t speak about it?

What’s Special About the Past?

In any language, the past tense is arguably the most used and useful verb tense after the present tense.

Speakers use the past tense to relay information they heard on the news, to tell stories about the costume party they went to the day before and to catch their friends up on the previous night’s episode of the French crime thriller “Engrenages.”

Lucky for you, French has multiple tenses for describing distinct time periods in the past. There are separate past tenses for completed and uncompleted actions, for events in the distant days of yesteryear and the past of just a moment ago.

Unlucky for you, each French past tense has its own set of conjugation rules that are often confusing for learners. Furthermore, the rules aren’t always consistent. They’re plagued by exceptions. For example, most verbs conjugate with the verb avoir (to have) in compound tenses, but there’s a set of verbs with être (to be).

Don’t freak out yet. I’ll get to that.

Time Traveling in French: The Essential Guide to the Grammar Rules of Past Tenses

Batten down the hatches! Hold on to your hat! There’s a battle a-brewing, my dear, and it’s bound to cause a few headaches.

Tenses in French aren’t as hard as you think if you have the appropriate tools to learn them.

Battle of the Ages: Le passé composé vs. L’imparfait

One of the biggest qualms that beginner French learners have is that it can be difficult to know when to use le passé composé (the perfect tense) and when to use l’imparfait (the imperfect tense). They both have different formation rules. Though their usage differences are subtle, there are distinct rules you should know.

When to use le passé composé and l’imparfait

Essentially usage comes down one variant: perfection. For example, events that have taken place and been completed are considered “perfect,” whereas events that have no definite beginning or end in the past are deemed “imperfect.” Get it?

(Yesterday, I was walking around Paris. The sun was shining and it was beautiful outside. It was midday and I saw a cat. He [the cat] was small and cute and I stopped so that I could watch him.)

Le passé composé is used for actions that are anchored at a specific point in the past. This includes events that have been completed. For example, the paragraph above says j’ai vu un chat. This is in le passé composé because there was one specific moment in the past when the speaker noticed the cat. The same goes for je me suis arrêté afin de l’observer. These are both completed actions: they have clear beginnings and endings and are fixed points in time.

Conversely, we use l’imparfait to denote habitual actions or events that don’t have clear endings. We use l’imparfait to set the background of the scene or to show ongoing events. For example, we see several verbs that set the scene: Le soleil brillait et il faisait beau. Il était midi. Il [le chat] était petit et mignon. Lastly, we see one ongoing action: je me promenais dans Paris.

How to form le passé composé

The long and short of le passé composé is that it’s a compound verb tense and it needs two pieces. The first is called the auxiliary verb, and it’s the conjugated form of either avoir or être. Most verbs conjugate with avoir, but all reflexive verbs (ie. se laver (to wash oneself), se figurer (to imagine)) conjugate with être. There are also a number of verbs called dr. mrs. Vandertramp verbs that conjugate with être.

The second piece is easy to make. Just drop the final two letters of the infinitive of the verb and add the appropriate ending. This new piece is called the past participle. Observe:

If you’re still confused, check out this in-depth explanation on how to form le passé composé and how to watch out for those pesky past participle irregularities.

Forming the imperfect tense is easier than le passé composé because there are no auxiliary verbs. Simply drop the -ons of the present nous (we) conjugation and add endings. Besides, you’re in luck! The endings are the same for all verbs, and the most common irregularity in the imperfect is être where its stem becomes ét-.

Still not sure when to use le passé composé and l’imparfait? Don’t stress: practice. There are a number of tests online and in textbooks to help you get the hang of the usage differences.

You Will Have Learned le futur antérieur

This verb tense is particularly useful when talking about “Back to the Future.”

Le futur antérieur allows you to talk about the past in the future (take a moment to digest that). For example, you can say things like: “By next Saturday, I will have learned le futur antérieur“.

And formation is easy! Take the simple future tense of auxiliary avoir or être as well as the past participle. It looks like this:

You Can Be More than Perfect!

Le plus-que-parfait is used to show that an action has happened before another action in the past. For example, the phrase Je n’avais pas fini mes devoirs quand tu es arrivé means “I hadn’t finished my homework when you arrived.” We employ le plus-que-parfait to show these double-past actions.

Forming le plus-que-parfait is also a two-parter. You take the conjugated imparfait of auxiliary avoir or être and the past participle. Check it out!

Le passé récent is the easiest past tense to conjugate which is a relief for learners of French who have made it this far. For actions of recent completion, literally things that *just* happened, we use le passé récent.

If you’re all verb-ed out when it comes to French past tenses, you’re in luck. Most of the time, speakers don’t use le passé simple. It’s used largely in literature. If you can’t identify the form of a verb, there’s a good chance it’s the weird looking passé simple. You can find out about le passé simple here.

The best way to master all the past tenses of French is to practice. Regular use is key, but here are some other resources.

Aside from the previously mentioned exercises for le passé composé or l’imparfait, there are a number of exercises for conjugating French verbs in all tenses. Websites like Conjuguemos and colleges like the University of Texas at Austin offer free online quizzes where you can practice verb conjugations. 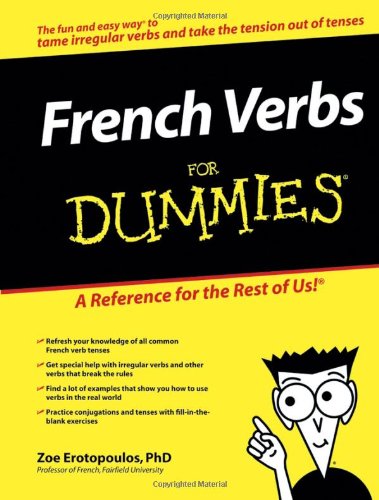 Also, there are a good number of books that focus only on conjugating french verbs! Books like “501 French Verbs” tackle all of the most common irregular verbs, and the “Dummies Guide to French Verbs” breaks down the complex world of French past tenses so that us dummies can understand.

Mastering the past in French may seem like an accomplishment, but it’s only half the battle. Verbs of all tenses interact with each other to form beautifully complex sentences, so don’t stop here. I would start by checking out this post on le conditionnel if I were you.

Now go out there and time travel, Marty Mcfly!