Your Essential Guide to Tricky French Pronouns “Y” and “En”

Got French pronouns buzzing around your brain?

Well, you can run, but you can’t hide.

Every French learner discovers pretty early on that mastering pronouns is one of the most challenging parts of learning sentence structure, which is crucial to understanding the language.

The most confusing of these pronouns are y and en.

They pop up all over the place, and it’s not always clear what they’re doing or why.

They buzz around and disturb your concentration when you’re just trying to enjoy a nice French story or a bit of French conversation.

You can try to ignore them or pretend they don’t exist, but they’ll be back before long…maybe when you least expect it.

Just try advancing in any intermediate French course or achieving fluency without them, and see how far you get!

You wouldn’t expect a couple of words that are one and two letters long to display such complex usage and pack so much meaning.

Fortunately, they’re pretty friendly once you get to know them. And now’s as good a time as any, right?

Buckle up: It’s a long ride.

At first glance, y or en may look like your average French pronoun being used to replace a noun in a phrase, but I’m here to warn you that this simple assumption is incorrect.

Even though these two words are pronouns, they act as if they were adverbs: Y and en are used to replace words in a phrase that denote quantities, qualities, properties and relations. Like adverbs do.

In that way, they are pronouns and adverbs at the same time. French shape-shifters, if you will.

So what exactly do they replace? Unfortunately, that’s a hard question to answer.

Most commonly, the pronoun y replaces indirect objects following the preposition à (to), and it roughly means “there” in English (the key word here being “roughly”).

The pronoun en replaces indirect objects following the preposition de (of), and it roughly translates to “some” or “any” in English (again, roughly!).

It’s essential to note that the adverbial pronoun en is entirely different from the preposition en (in).

Before we get into all the rules and no-nos and particularities of using y and en, it’s worth mentioning that the best ways to understand the peculiarities of any language are to practice it and hear it being spoken.

In addition to encountering these adverbial pronouns out in the Wild West of French books, movies and television (and you will encounter them often), there are a number of online tests you can use for y and en in particular.

About.com offers a good quiz to help you master these pronouns.

Columbia University has one, too.

Even better, and speaking of the Wild West, the University of Texas has two quizzes—one for y and one for en —so you can practice them separately.

You can also hear these pronouns in use by native French speakers on FluentU. Listen out for them in videos like TV show and movie clips, commercials, news segments, interviews and more. 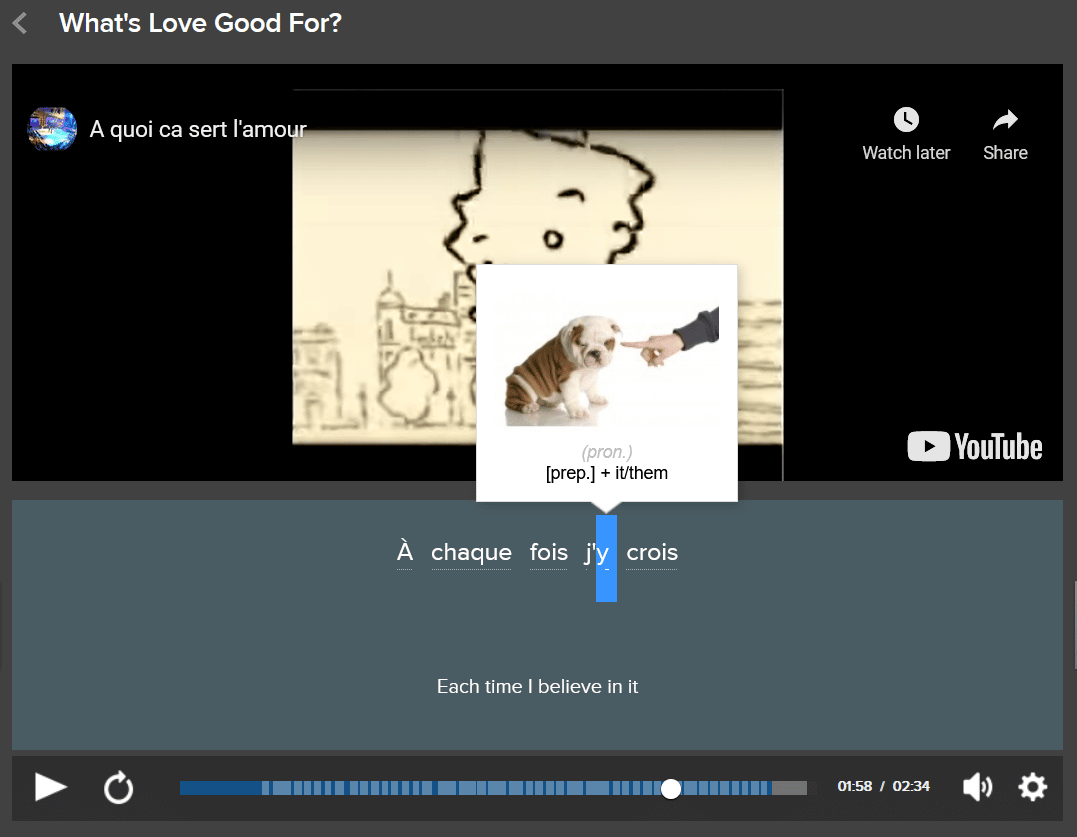 FluentU also allows you to save words as flashcards and has review quizzes that adapt to your learning level. The flashcards also have clips from other videos on FluentU that contain the word for more context. And, in addition to learning about the pronouns y and en, you can use FluentU to check contextual meanings of any word in the subtitles just by clicking on it.

As I previously mentioned, y replaces constructions that include the preposition à, but you shouldn’t stop reading just yet. There’s more! Check out the various uses and limitations of the pronoun y.

In its simplest use, the pronoun y replaces the indirect object of the verb when it is followed by a noun that is a location.

For example, look at the following phrase:

Vous allez à la bibliothèque? (Are you going to the library?)

In case it’s unclear, la bibliothèque is a location. Now, if you wanted to make a really long sentence, you can say something like:

Oui, je vais à la bibliothèque. (Yes, I am going to the library.)

You will notice, however, that the response sounds formal and rigid and no one talks like that. What we need is a pronoun to replace à la bibliothèque.

That pronoun is y. Observe:

Y can also replace à with non-person nouns that are not locations. When a verb takes an indirect object, you can replace that indirect object with the pronoun y.

Check out this example using the noun le livre (the book):

Though the pronoun y is generally used to replace à with non-person and location nouns, you can also use it to replace other prepositions so long as they occur before a location noun.

For example, you can use it with phrases that include chez, a preposition often used to refer to being “at” someone’s home, or dans (in).

Elle était chez moi. (She was at my house.)

Elle y était. (She was there.)

As with all French grammar, the use of the pronoun y is pretty restrictive. You cannot use y to replace à + a person or à + a verb.

For example, it doesn’t make sense to use it in the following ways:

There are also a number of expressions that have y in them. These include, for example, il y a (there is) and allons-y (let’s go). It may be confusing for learners to wrap their heads around these expressions and the role that y plays in them, but don’t worry about it! These are fixed expressions, so you can take them at face value.

First and foremost, en can replace nouns that use the partitive article de. The partitive de is the equivalent of saying “some” in English. Check out this example of one and how it came be replaced by the adverbial pronoun:

Furthermore, en can replace de and a noun that has an indefinite article (un or une):

En can replace modifiers such as quantifiers (i.e., something that gives a quantity or a number).

J’ai beaucoup de livres. (I have a lot of books.)

Nous en voulons quatre. (We want four of them.)

Keep in mind, however, that even though en replaces the noun and de if it is included, the modifier remains in its place in the sentence. That is why both beaucoup and quatre remained in the sentence even when en joined in on the fun.

En can replace de and the following noun in situations where de is part of the verb phrase itself.

For example, se souvenir de is a set verb expression meaning “to remember.”

Elle s’en souvient. (She remembers it.)

For example, using it in the following sentences makes no sense, and if you say these, a French speaker will look at you like you have brie cheese for brains:

Remember those endless rules that plague the French language? Well, the rules regarding y and en don’t stop here.

Oh, French, you’re so obsessed with order and so worried that sentences will end up a free-for-all! If speakers use more than one pronoun in a phrase, it has to be done in a particular order. Talk about being controlling, French!

In these situations, your direct object personal pronouns come first (me, te, nous, vous), and then come your optional inanimate direct pronouns (le, la, les). Next come your indirect objects (lui, leur), and finally our new friends y and en.

Are you all y-and-en-ed out?

You’ll get the hang of it!