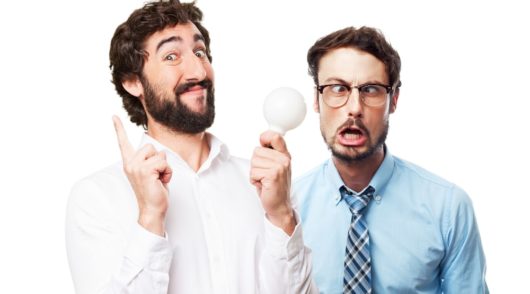 By Alan and Joanna

Not sure how to learn French grammar (without going crazy)?

Or just looking for tips to accelerate your French grammar learning?

You’ve come to the right place.

Today I’ll present six tips I wish I’d heard when I first started learning French grammar. I’ll include some French grammar resources that will be helpful right away and way beyond the beginner stages.

Once you know these handy French grammar rules and tools, you’ll have a strong foundation to keep working towards French fluency.

1. He or She? We Must Agree! Don’t Forget About Gender Agreement

This is one of the tricky parts of learning French grammar, because the idea doesn’t really exist in English. When you name a table, a chair or a house in English, you don’t need to worry about its gender. However, in French, every noun has a grammatical gender.

The difficulty is that a noun’s gender doesn’t simply matter to that noun alone. In fact, the gender of a noun will change the ending of the words referring to it–this is called “agreement.”

For example, any adjective modifying a feminine noun must also be spelled in its feminine form. The article before that noun would also have to be feminine.

So, when learning French vocabulary, it’s super important that you learn not just the word, but its gender too, so that you can actually use it correctly in sentences!

There are many tricks for learning French noun genders, so try a few to find out what works best for you. If you tend to be a list learner, a handy trick is to memorize the patterns of endings that are typically one gender or the other.

For example, the nouns with these endings are typically feminine:

And masculine nouns mostly end with:

Remember that there are always exceptions that you’ll have to learn specifically, but this pattern is a useful rule of thumb.

Another good way to learn the gender of new words is to learn sentences that suggest the gender to you, or by linking words of the same gender and learning them together, such as l‘homme aime son vélo vert (the man loves his green bike) or la femme aime la forêt et ses belles fleurs (the woman loves the forest and its beautiful flowers).

In a similar vein, when learning thematic vocabulary lists, break up words into one list of masculine words and one list of feminine words. For example, when learning foods, you might have le pain (bread) and le fromage (cheese) in one list and la pomme (apple) and la carotte (carrot) in another.

Try to create mental images of these things that you can recall later: for bread and cheese, conjure up an image of dipping bread in cheese fondue; for apples and carrots, you might imagine a snack platter. As with the above strategy, this exercise gets you actively thinking about gender and making connections between the words you are learning.

If you catch yourself wondering if fromage is masculine or feminine later on, you just have to remember which mental image you associated the word with!

Most of us can speak and read English without actually knowing the names or the grammatical forms behind it. We just know what sounds right and what doesn’t. But when you’re learning a new language, you have to learn to build the grammar from scratch.

Before you learn French grammar, make sure you cover some English grammar so you can relate all the terms and concepts you’re learning about in French to the ones you already know in English. This will make remembering them a whole lot easier, and will also help you understand them, since you can compare them to familiar English examples.

Another benefit is that when you notice yourself using a certain form in your everyday speech, you’ll be reminded of how to form it in French.

A great resource for this is the book “English Grammar for Students of French,” however you can use any English grammar book that you already have, or even just do an online review to brush up.

At the very least, make sure you know each part of speech (noun, verb, adjective, etc.), different tenses of verbs, types of clauses, prepositions and particles. Many of the French terms are similar to the English, making them easy to learn—for example, a verb is un verbe—not too hard to remember!

It’s also worth learning the French names of grammatical terms. This will make reading the French grammar books much easier, because they like to be tricky and use French while teaching it to you.

Doing this will also help you navigate your textbooks and grammar references, as they mostly use the French terms. So, once you know them in English and French, and have a vague idea what they mean, you can look up the specifics and refresh how to form them.

3. Get a French Dictionary That Includes Grammar Info

A basic tool for learning French is, of course, a good dictionary. Most dictionaries typically have a grammar section at the back—make sure whatever dictionary you buy has this section. If it’s a big dictionary, it’d better have a decent grammar section—50+ pages devoted to grammar.

This is so you have everything you need in the one place. What’s the use of being able to look up a vocabulary word if you can’t use it in a coherent sentence?

Pocket dictionaries also have grammar sections to help you on-the-go. Keep one of these on you, and when you have a quiet moment, try creating some French sentences, using the vocabulary and grammar guides to help. It’s amazing how tiny these dictionaries can be, so you’ll barely notice you’re carrying it around until you whip it out for some French composition.

A good dictionary is worth its weight in gold (well, maybe not quite, those things are super heavy) because if you’re going to study groups or classes, you’ll want a single book that gives you all you need, so you don’t have to lug around your growing French library.

There are also many dictionaries online that can help you learn French grammar rules, but make sure you use one with an established name like the “Trésor de la Langue Française” or anything from the Académie française.

The more grammar and textbooks you have at hand, the better equipped you’ll be to get a handle on French grammar. You can collect these from secondhand bookstores or charity shops, so you don’t have to fork out for the recommended textbooks that are currently being used in schools or universities. These are often just newer versions of the same thing, and once people stop studying French, many of those books end up in secondhand shops.

The benefit of getting a range of books is that you’ll find some are written more to your taste, or perhaps one covers some topics better than others. The best ones will have good cartoons! It’s also good to read several explanations of a tricky topic—be it the mood of a verb or how participles work—as you might find that it takes a few goes to sink it, or until you find an explanation that makes sense to you.

Hearing it phrased differently also helps with your own comprehension, because rather than memorizing an explanation you don’t really understand, it encourages you to think about it from different angles.

To truly learn French grammar, it’s also important that you see and hear a lot of content that demonstrates the rules you’re learning.

A great tool for this is FluentU, which teaches you French grammar and vocabulary through authentic French videos like music videos, commercials, news broadcasts, cartoons and inspiring talks.

By seeing and experiencing French grammatical concepts in many contexts, you will not only intuitively develop a better understanding of them, but they will become much harder to forget.

Love the thought of learning French with native materials but afraid you won’t understand what’s being said?

FluentU brings authentic French videos within reach of any learner. Interactive subtitles will guide you along the way, so you’ll never miss a word.

Tap on any word to see a definition and grammar info, as well as in-context usage examples, audio pronunciation and helpful images.

For example, if you tap on the word “suit,” then this is what appears on your screen.

Plus, since this video content is stuff that native French speakers actually watch on the regular, you’ll get the opportunity to learn real French—the way it’s spoken in modern life.

As you continue advancing in your French studies, FluentU keeps track of all the grammar and vocabulary that you’ve been learning. It uses your viewed videos and mastered language lessons to recommend more useful videos and give you a 100% personalized experience. You can start using FluentU on the website with your computer or tablet or, better yet, download the FluentU app from the iTunes or Google Play stores.

5. Use Ne… pas for Negation

This is one element of French grammar you can easily learn then put to plenty of use.

It’s very easy to create negative sentences in French, and it instantly doubles what you can say in your new language.

So, you can say J’aime le chocolat (I like chocolate). But if, for some strange reason, you want to say “I don’t like chocolate,” all you have to do is put ne before the verb and pas after. In other words, just use the structure ne + [verb] + pas and you’re there.

If your verb starts with a vowel, just use n’ instead of ne.

Another cool thing is that you can easily swap “pas” with other words to express different types of negation.

If you can lie in a new language, you’re doing well!

6. Focus on the Present (Tense) Now

With verbs, it can be overwhelming how many different tenses there are to learn—present, past, past perfect, future, future perfect, past and present participles… and yes, the list goes on. But when you’re starting out, don’t worry about all these. You can get a long way with the present tense, and once you get comfortable using it to form sentences, as well as having the vocabulary to do so, learning how to put it in the past or future tense won’t be so daunting.

We have a full guide to the present tense in French right here.

If you’ve been wondering how to learn French grammar, we hope these tips and tricks will make it all easier for you. You’ll soon find that it’s not always easy to learn French grammar, but it doesn’t have to be a pain, either. Just start on the right foot, with the right resources like the ones we recommended above, and you’ll be on your way to glorious grammatical mastery!

Beyond “Au Revoir:” 10 Ways to Say Goodbye in French Like a Native Speaker (With Examples and Context)
10 Best French TV Series to Learn French