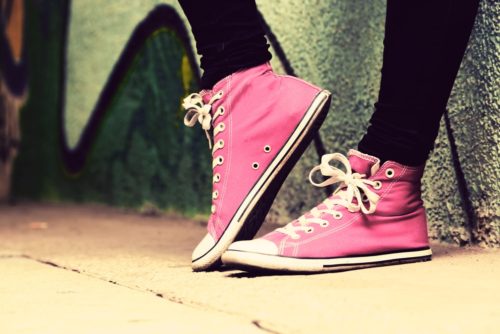 When you’re just starting to learn French, you’ve gotta step up and memorize a lot of vocab.

Argot, or slang, can make all that memorizing way more fun.

It gives you a taste of real French, the language that real French people speak!


And why shouldn’t that get you excited?

French textbook editors are starting to understand what we want. Even they realize that memorizing lists can get boring, so many French textbook vocab pages include a fun word or two at the bottom with argot printed next to it.

We need to know things like study methods for learning French grammar rules, common words and phrases for basic communication and extensive lists of French vocabulary for everyday use. That’s what helps us get by abroad. But what do we language learners truly want? We want to speak fluently, like those glamorous French actors in classic movies or the native speakers hosting our favorite podcasts. The way to get there is to learn the slang words that people use every day on the streets and avenues of Paris.

Unfortunately, the French slang words you learn in school or from more formal books tend to already be outdated by the time you learn them. After all, language is constantly changing, and a textbook that was published even two years ago might not have the most recent or most common French slang expressions.

Luckily, you can get those French slang expressions right here. Memorize as many as you like, and be sure to drop them in front of your French-speaking friends!

When you first started learning French, you probably picked up quite quickly on that very useful question/answer pair: “Ça va ? Ça va!” The expression literally translates to “It goes?” “It goes!” but is used as a form of greeting, similar to, “How are you?” “Good.”

And yet, if you really want to sound in-the-know, this other question-answer pair is far more useful.

Ça baigne uses the verb baigner, meaning to bathe. Baigner is used non-idiomatically to refer to something submerged in a liquid. For example: Ça baigne dans de l’huile (It is bathed in oil). In fact, that’s likely where the expression comes from.

Some etymologists believe that the mid-20th century term comes from the idea of bathing in oil — something that’s quite fantastic for potatoes or pommes frites (french fries) — or even another kind of bathing altogether. Ça baigne is often associated with the beach, where not only do people se baignent, go for a dip, but are often themselves baignés (bathed) in oil — tanning oil, that is! Of course, today you don’t need to be swimming in anything in particular to use this expression which means ça va.

This next expression is used to tell someone to stop being a show-off or stop bragging.

Before we delve into this expression, bear one thing in mind: you don’t want to use this one in front of anyone’s grandmother. Or really anyone’s mother. It’s not all that vulgar, but it’s definitely not for mixed company. The reason has a lot to do with the real meaning of the last word: péter means to fart.

You may now be asking yourself why there’s an idiomatic expression in French telling people not to fart on themselves. It’s a bit more complicated than that.

The clue is in that la that has snuck its way into the expression. The la refers to a noun now forgotten in the general use of the phrase — originally it referred to bretelle or suspender. In the 19th century, holding out one’s suspender and making it pète or snap against one’s chest was a way of punctuating a brag or show-offy comment. The expression is still used in its entirety in Québec.

If you want to use a similar expression in mixed company, try using Arrête de te vanter instead.

This is a very familiar, bordering on rude way to say that you’re leaving somewhere. A bit like “I’m outta here!” It can also be used as a suggestion: On se casse ? (Should we get out of here?)

This expression can also be used as a sort of insult. To say “Casse-toi !” to someone means, “Get out of here !” or even “Piss off!” It’s definitely not an expression to be used around just anyone, but it can come in handy if you’re being harassed in the street. A well-placed “Casse-toi !” definitely gets the message across.

Astute French grammarians will see that the negator “ne” has been dropped from this phrase, as it is in most French slang expressions. This one means “He doesn’t understand anything,” or “He’s super out of it.” You can use it to describe an airhead or someone a few crayons short of a full box.

If you want to put even more emphasis on this expression, you can say, “Il capte trois fois rien.“ Though astute mathematicians will say that three times nothing is still nothing. French slang isn’t an exact science.

Laisse tomber means “Let it go” or directly translated, “Let it fall.” It’s vaguely similar to the English “Drop it,” though the English expression is a bit more aggressive in intent than the French version. “Never mind” would be a more apt translation. Laisse tomber is a great expression to use when you realize that the person you’re talking to doesn’t understand what you’re saying and you’re tired of trying to explain… something that can happen frequently when you’re learning a language.

This expression has become so common in French that some prefer to use it in verlan, the French slang that consists of inverting syllables of certain words. In fact, verlan is verlan for l’envers, or the opposite. The verlan for laisse tomber is laisse béton, which becomes all the more amusing when you realize that béton also means concrete.

Those born before the early 90’s will remember when duh became the word of choice for teens across America. So is Sans déc for the French teen of today.

Sans déc is the abbreviated version of Sans déconner, something that directly translates to approximately “You’re not kidding,” though the word choice is far stronger than kidding. This is a fairly vulgar expression that you’ll want to avoid in mixed company. If you wish to express the same meaning in front of people you don’t want to curse in front of, try Sans blague, or “No joke.”

This expression is usually used to describe someone’s foreign language skills… and it’s not a compliment. To compare someone’s speaking to a “Spanish cow” is a colorful way of saying that they don’t speak very well.

You’ll often hear French speakers complain that they speak English “comme une vache espagnole,” so it’s lucky your French will be good enough to make up for it! And if someone ever does compare your language skills to a Spanish cow, be sure you have a well-placed retort ready to prove them wrong.

If you’re comparing this to the English cognate phlegm, you’re right on point! But before you think this is an expression you should be using when you have a cold, hang on; this phrase has nothing to do with mucus buildup.

French — like many other Romance languages — often continues to use terms that come from Greco-Roman medicine, particularly those having to do with the humors. Sanguin, bilieux, flegmatique and mélancolique are all adjectives you’ll still hear today to describe people’s personalities. Flemme comes from the same root as flegmatique, though while the latter describes someone of a relaxed, peaceful nature, flemme is more negative in nature and means laziness.

When someone says J’ai la flemme, they aren’t necessarily describing themselves as a lazy person. They are saying that they aren’t in the mood to do a task set before them… or that they’re in a general state of laziness at that point in time. This can also be compared of the French use of the word spleen in its Baudelarian sense — to have le spleen means to feel generally discouraged or to have ennui. It doesn’t mean a depressed or depressive person; it just describes a current mood.

A creux is a hollow, related to the French verb creuser, to dig. In French, saying that you have a creux means that it’s in a very specific place… your stomach. Saying J’ai un petit creux means that you’re a bit hungry or peckish.

This expression can also be used when you’re very hungry… just remove the petit and replace it with a grand! It’s not as common to express great hunger using this expression, but the phrase will come in handy when someone asks if you’d like to eat something and in English you would have responded with, “I could eat.” “Ouais, j’ai un petit creux.“

Those familiar with French probably don’t see how this counts as an expression, but hang on a second — in this case, quoi isn’t merely the translation of “what.”

French speakers in recent years have picked up the habit of using quoi as a general way to punctuate the ends of sentences. It has no real meaning, save one of slight emphasis or summary. For example:

(He didn’t have a map of the city. His phone was out of battery. He had forgotten the name of the person he was supposed to meet… Tough luck.)

The interesting thing about quoi for those learning French is that it’s hard to use it incorrectly. Start tacking it on to the end of your sentences for emphasis, and see how impressed your French friends are with your newly found French slang skills!

If you’re looking for more ways to learn informal French as it’s actually spoken, IE Languages has an e-book on the subject. It comes with audio files, so you can hear examples of slang and more casual French before you inevitably encounter it out in the real world.

Here are some more great ways to pick up slang:

If you want to learn French the way that people actually speak it, then you won’t want to miss FluentU. FluentU takes music videos, commercials, news and inspiring talks, and turns them into French learning experiences.

FluentU lets you learn real French—the same way that people use it in real life. FluentU has a diverse range of great videos like movie trailers, funny commercials and web series:

FluentU brings French videos within reach with interactive subtitles. Tap on any word to see an image, definition, and useful examples.

Tap on the word “suit,” for example, and this is what appears:

And FluentU’s “learn mode” lets you learn all the vocabulary in any video with questions. Swipe left or right to see more examples for the word you’re learning.

FluentU always keeps track of vocabulary that you’re learning. And it uses that vocab to recommend examples and videos so that you get a 100% personalized experience. You can use FluentU on the website with your computer or tablet or, better yet, download the FluentU app from the iTunes or Google Play stores.