Not Your French Prof’s Dictionary: 9 French Slang Dictionaries to Talk Like a Native

Want the skinny? Need the scoop? Would ya dig some more info?

Today, we’re going to be talking about those treasure-troves of idiomatic expressions—French slang dictionaries.

So take five, take a load off and let’s get this party started!

You’re working hard to learn standard French. Learning slang requires a little extra effort, but it’s worth it. Why?

How Good Are You at Slingin’ Slang?

Before you get your slang dictionaries in hand and really start digging into them, here are a few ways you can test what you already know and practice the new slang you’re learning.

There are many online quizzes you can take to test your knowledge of French slang. Here are a few to get you started:

You can then try this 15-question quiz in three formats, also from Quizlet, focusing on phrases for self-expression such as “it’s disgusting,” “it’s boring” and “I don’t care.”

Types of Slang Your Dictionary Should Cover

Slang seems to come out of the woodwork, sneaking its way into French in several different ways. Here are a few.

For example, a hungry ado (adolescent — teen) might go to a resto (restaurant — restaurant) to fill up.

And you may’ve read about the Count of Monte Cristo: he was a sailor who became an aristo (aristocrate — aristocrat).

French is no exception. Casual conversations are full of words like quoi (what), ben (from bien — well) and euh (um).

Numerous loan words in French come from English, such as stopper (to stop), le parking (the parking lot) and le shampoing (shampoo).

Many of these adapted foreign terms find their home in slang dictionaries, away from the watchful eye of l’Académie française (the French Academy, which guards over the integrity of the French language).

How can slang make your French vocabulary more colorful? Test-drive a few of these common expressions and then read on for a list of slang dictionaries that’ll cure your cravings for colloquialisms.

Gather around, mes potes (my buddies) and I’ll tell you a little story about my acquaintances.

There’s this mec (man) I know, a real asperge (tall, thin person — literally, “asparagus”). He really loved his meuf (woman, girlfriend). The two got married and had a gosse (kid).

Use extra pizazz to share your emotions and feelings.

If you’re full of vigor and energy, vous avez la pêche (literally, “you have the peach”). However, if things aren’t going your way, vous devez garder la pêche (you must keep your chin up).

If you’re exhausted, you might tell your friends, “Je suis crevé(e),” which means that the air (energy) has gone out of you, like a flat tire that’s burst.

If you feel really out of sorts or you’re confused by what’s going on, you can say, “Je marche à côté de mes pompes.” (This literally means, “I’m walking next to my shoes,” and implies that you’re out to lunch.)

Don’t freak out if someone asks you for fric in France. They don’t want to know if you’re harboring a deviant in some dark corner of your basement. They just want some of your dough… greenbacks… bread… cash.

And if someone says, “Avez-vous de la thune?” they don’t want you to sing them a song. Again, they’re asking you if you have money.

So how does one faire bouillir la marmite (bring home the bacon — literally, “make the cooking pot boil”)? With un boulot or un taf—both slang ways of referring to a job. Don’t confuse un taf (job) with une taffe, which is a puff on a cigarette.

While France has a reputation for gastronomic greatness, there are still times when its citoyens (citizens) want to pig out. And it was for this that bouffer was born. Bouffer comes from a sewing term meaning “to puff out.” It gave birth to la bouffe, which is a feast fit for a gourmand.

On s’appelle—on se fait une bouffe is the French way of saying, “Call me—we’ll do lunch.” (Or any other meal where there’s lots of food and merriment.)

Of course, with all that food at la bouffe, you’ll need something to wash it down. That’s when you can trinquer (to toast/to drink) with your friends.

Words for Every Occasion

These are slang phrases and common expressions that you won’t learn in French class, but you’ll hear in everyday French conversation.

Métro, boulot, dodo: The same old grind of commuting, working and sleeping—then starting all over the next day. (Dodo is a little kids’ word for “sleep.”)

Quand même: This little phrase is a workhorse. It can mean “wow” (expressing surprise), “anyway” (as in, “thanks anyway”) or “all the same/even so,” as in, Quand même, j’aimerais aller. (Even so/that being the case, I would still like to go.) It can even show your incredulity about someone’s plans.

I learned about quand même while spending l’année scolaire (the school year) in France. It became indispensable to me. When I returned home, I asked my bemused French professors why they hadn’t introduced this infinitely useful expression in class!

We’ll start off with handy online French slang dictionaries, then a range of options available in print or as e-books.

Maybe you don’t like lugging books around, or you just want to get your feet wet before you invest in a full-sized dictionary.

These online options may be a perfect fit for you.

Each short entry in this French slang blog presents the slang in context, with a brief explanation of its origin and meaning. At the end of every post is an audio file, with all of the examples pronounced.

The handy search box in the upper right-hand corner helps you hunt down particular words and phrases.

The Street Talk Savvy site divides slang phrases into categories, each with its own page. The main page is general sayings. The French is given first, with the English translation directly below it.

If you’re looking for an extensive online French slang dictionary with a formal layout, look no further. Language Realm lays out its storehouse of colloquial words and expressions in alphabetical order.

Many entries include both the figurative meaning and the literal translation, so you can get a sense of how some of these idioms were coined. Vulgar and pejorative terms are flagged so you can gauge when it’s appropriate to use them.

The slang page on the French Learner site, run by French teacher David Issokson, lists slang words and phrases in handy categories. Each word or phrase has a link to an audio file, which you can hear online or download.

“What They Didn’t Teach You in French Class” 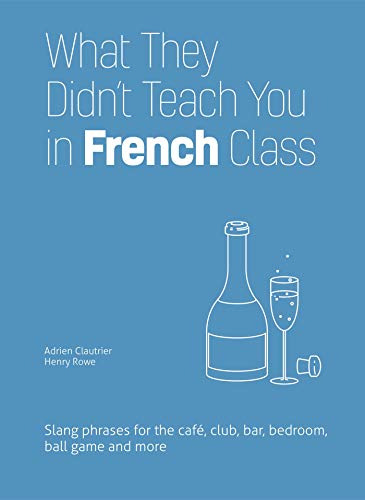 This book is a little edgy, but it’s certainly down to earth. French phrases follow the English ones, with notes on how to use some of the expressions in context.

The slang is divided up by topic. Explanations of particularly French customs, such as la bise (the “Hello kiss”), enrich your learning experience. 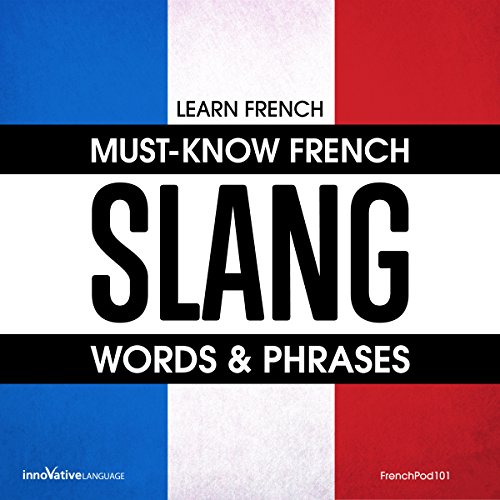 Targeted at beginners, this audiobook introduces four slang terms per lesson, with 25 lessons total. It’s accompanied by tons of bonus learning material, like an e-book to read along with and special review tracks for vocabulary reinforcement.

Since this book comes from the team behind FrenchPod101, you know you’re getting material that’s both high quality and interesting. FrenchPod101 crafts lessons with French language experts, with a focus on entertaining and up-to-date learning material. To take your studies up a level, check out the FrenchPod101 podcast with more than 1,300 video and audio lessons (and more added all the time!).

Like the slang dictionary, the podcast comes with extra content like PDF lessons notes and “spaced repetition” flashcards that have you review words at the optimal moment for memorization. Check out all the FrenchPod101 features here.

“French Slang: Do You Speak the Real French?” 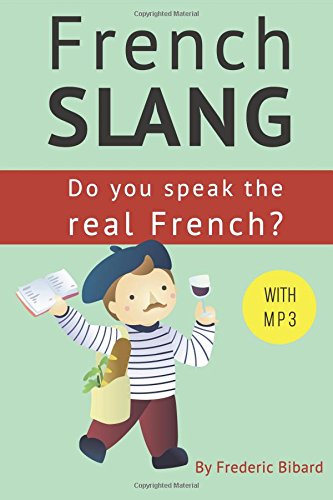 Frédéric Bibard of Talk in French asks, “Do you speak the real French?” Of course, he’s referring to French slang. If you aren’t yet fluent in “real French,” this text can help.

Slang words and phrases are presented in tables, with the French in the first column and the English equivalent to the right.

Purchasing the book also gives you access to audio files so you can hear exactly how these phrases are supposed to sound. Or you can choose the audiobook version, if the paperback or e-book (Kindle) format aren’t your cup of tea. 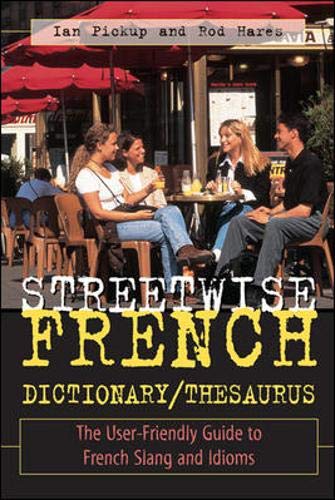 This paperback contains not only an alphabetized dictionary of slang terms but also a topic-specific thesaurus that details words’ origins and usages.

Little comic drawings illustrate the French body language that accompanies many slang expressions. There are also exercises (complete with answer keys) to test your retention of the terms. 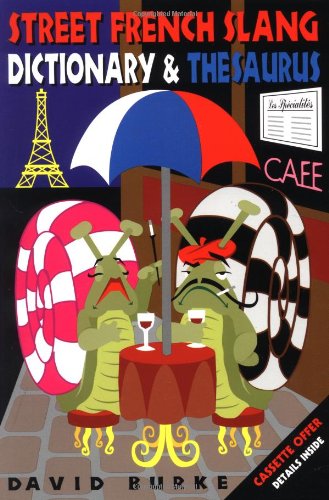 Featuring French slang in both dictionary and thesaurus formats, “Street French Slang” is a thorough foundation for casual and familiar language.

True to the thesaurus aspect, the book offers synonyms and antonyms for many of the terms. The book identifies the relative “strength” (potential for offensiveness) of many slang words and phrases. Numerous examples provide content for the slang.

Particularly offensive terms are relegated to the final section of the book, “The Street French Thesaurus.”