Is your couch comfortable?

From now on, your couch is your French classroom.

In the best way possible.

We’re going to show you how to supercharge your French practice while sipping tea and nibbling on some popcorn.

How is that even possible?

With the wide, wonderful world of French movies.

We’ve got eight flicks that won’t just take you on a wild ride through French thrillers, comedies, cop chases, tear-jerkers and more—they’ll also give your vocabulary and comprehension skills the red carpet treatment.

So kick back in that couch and get ready to watch!

Why Should You Learn French with Movies?

French movies are a cheap and accessible resource:

With the emergence of streaming giants like Netflix and Amazon Prime in recent years, watching a foreign movie is now as easy as ordering a pizza. You’re just a few clicks away from myriad great movies, and what’s more, you won’t be burning your wallet in the process.

Learning French with film content has never been more popular! But sometimes, taking entertainment from a passive to an active lesson can be difficult. Thankfully the French FluentU YouTube channel showcases how to extract the most educational value from entertaining films while still enjoying the process!

In the video below, you’ll learn how to cover basic grammar, pronouns and French expressions (and more) with the popular film “C’est Tout Pour Moi.”

If you love or are excited by the idea of learning French with film and TV then, be sure to subscribe to the FluentU French YouTube channel for more fantastic lessons and learning tips!

You get to learn with movies you love:

Horror fan? Sci-fi geek? Prefer a good ol’ tear-jerker? Whatever your preferences are, you’re guaranteed to find something you’ll love, from obscure French flicks to international blockbusters. French movies span pretty much every genre or subculture in existence.

This way, learning with French movies is more of a laid-back experience. Less stress. More fun. Which means more motivation to keep learning and building your skills.

There’s a movie for every learning level:

Whether you’re nearly fluent or you’ve just started to dip your toes into French learning, there’s a movie that fits your needs.

The kind of French you learn in formal settings is all fine until you speak with an actual French person. Because, yes, most of the time French people take quite a few liberties with their language. That’s usually where you start to get frustrated and curse uncontrollably at your textbooks.

But fear not! Movies will expose you to all kinds of accents, informal speech, everyday language and slang.

French cinema is often hailed as one of the most thought-provoking forms of art, ever. I wouldn’t disagree. Using French movies as a learning tool is a formidable way to immerse yourself in French culture, history and mannerisms.

Not only will this give you a richer French learning experience, it’ll also open you to new perspectives and make you a more culturally aware person.

How to Get the Most out of Your French Film Experience

Repetition is key. The remote is your friend! Because, yes, you’ll have to rewind. A lot. And that’s awesome. Don’t hesitate to rewind whenever you’re not sure of what you’ve just heard, or just want to listen to a certain sentence multiple times in order for it to make more sense.

Go at your own pace with the subtitles:

If you’re a beginner, you should start by turning on the English subtitles. True, you won’t be getting the most French out of your watching experience right away. But that’s okay.

Going at a pace that you can reasonably follow is what matters, and even with the English subtitles on, you’ll be able to refine your pronunciation skills and get a better grip of spoken French while still keeping track of the plot.

More advanced learners should turn on those French subtitles. They’ll help you understand the dialogue without taking your brain out of French-mode. You’ll also start to absorb French sentence structure and other linguistic patterns.

Want your subtitles to do even more work for you? Take advantage of the bilingual captioning on FluentU.

Keep a notebook nearby:

What did she just say? Was that satiété (satisfaction) or société (society)? This is where a notebook comes in handy.

Use your smartphone or a good ol’ paper notebook to keep track of unfamiliar words or phrases. I’d recommend writing down separate categories for grammar, vocabulary and expressions, along with the English translation.

The benefits of having a notebook are twofold. First off, writing down words and expressions in your notebook will make you more mindful of what you’re hearing, so you’ll be actively learning and not just passively watching. Second, reviewing what you’ve learned with a notebook is super convenient. Got a few minutes to kill before your bus arrives? In line at the grocery store check-out? Long train ride? Refer to your notebook whenever you want for a quick study session!

The more frequently you study with your notebook, the longer you’ll be able to remember words, grammar patterns and expressions from the movies you’ve watched.

Need French Movies to Learn French? Here Are 8 Great Flicks to Get Started 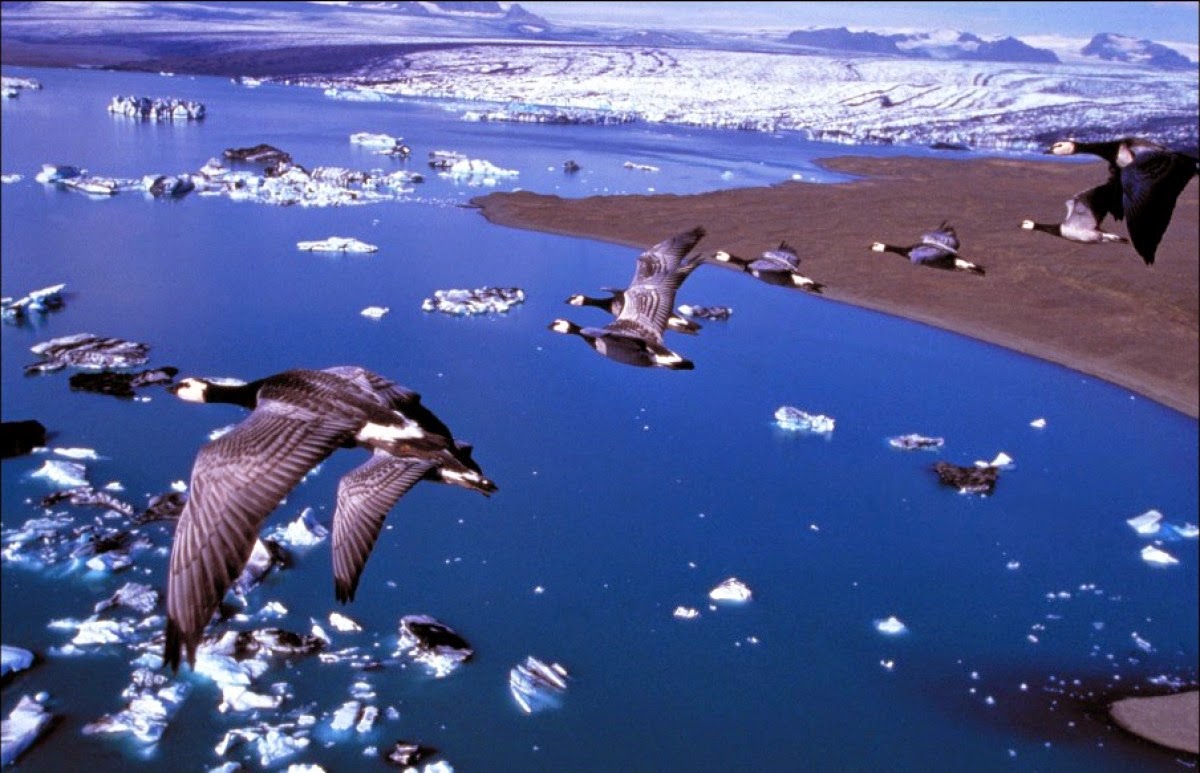 If you love nature or anything related to animals, then you’re in for one of the most emotional experiences of your life.

Perrin and Cluzaud used revolutionary techniques in order to film this documentary—techniques that remain relevant to this day.

The result? A visually stunning experience that’ll make you feel like you’re flying along with those magnificent birds. On top of the breathtaking visuals, you’ll surely enjoy the slow, smooth, clear voice of the narrator that makes it easy even for beginners to understand a lot of what’s happening on screen. 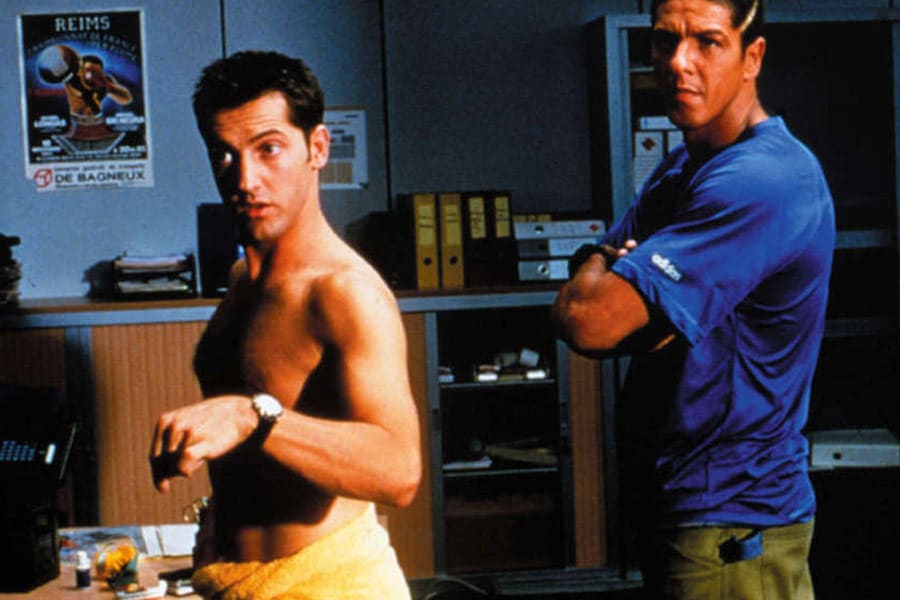 Emilien, a clumsy cop from the city of Marseilles, has just failed his driver’s license test… for the eighth time!

Disillusioned, Emilien will soon cross paths with Daniel, a former pizza delivery man-turned-taxi driver who’s been busted for speeding, yet again. In order to keep being able to drive his taxi, Daniel accepts a deal proposed by Emilien: Daniel will keep his rights to drive his taxi if he helps Emilien bust a criminal organization that relies on powerful cars to rob banks.

“Taxi” is one of the most well-known action-comedies in France and has quickly become a fan-favorite. Due to the fact that it features slang and everyday language, “Taxi” is a particularly useful movie for you to broaden your French conversational skills.

The language used throughout the movie is mostly familiar, so it might be best suited for intermediate or advanced learners. 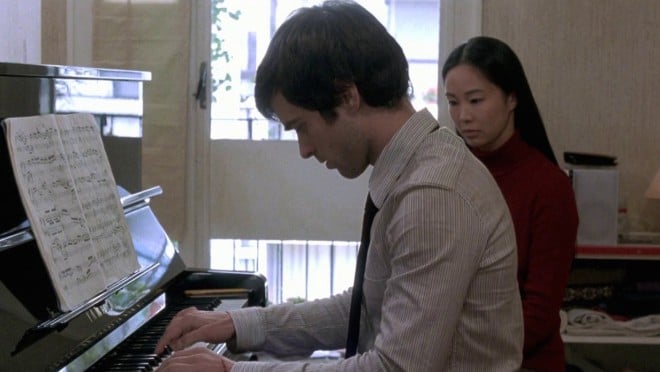 You’re in a for a thrilling ride. “De Battre mon Coeur S’est Arrêté” (“The Beat That My Heart Skipped” — literally “My Heart Stopped from Beating”) is a remake of James Toback’s 1978 movie “Fingers.”

It’s hard to say more without spoiling the good stuff, so I’ll let you discover it by yourself. Boasting a gripping atmosphere and a talented cast, this French movie will be best suited for intermediate to advanced learners since the characters tend to talk quite quickly. 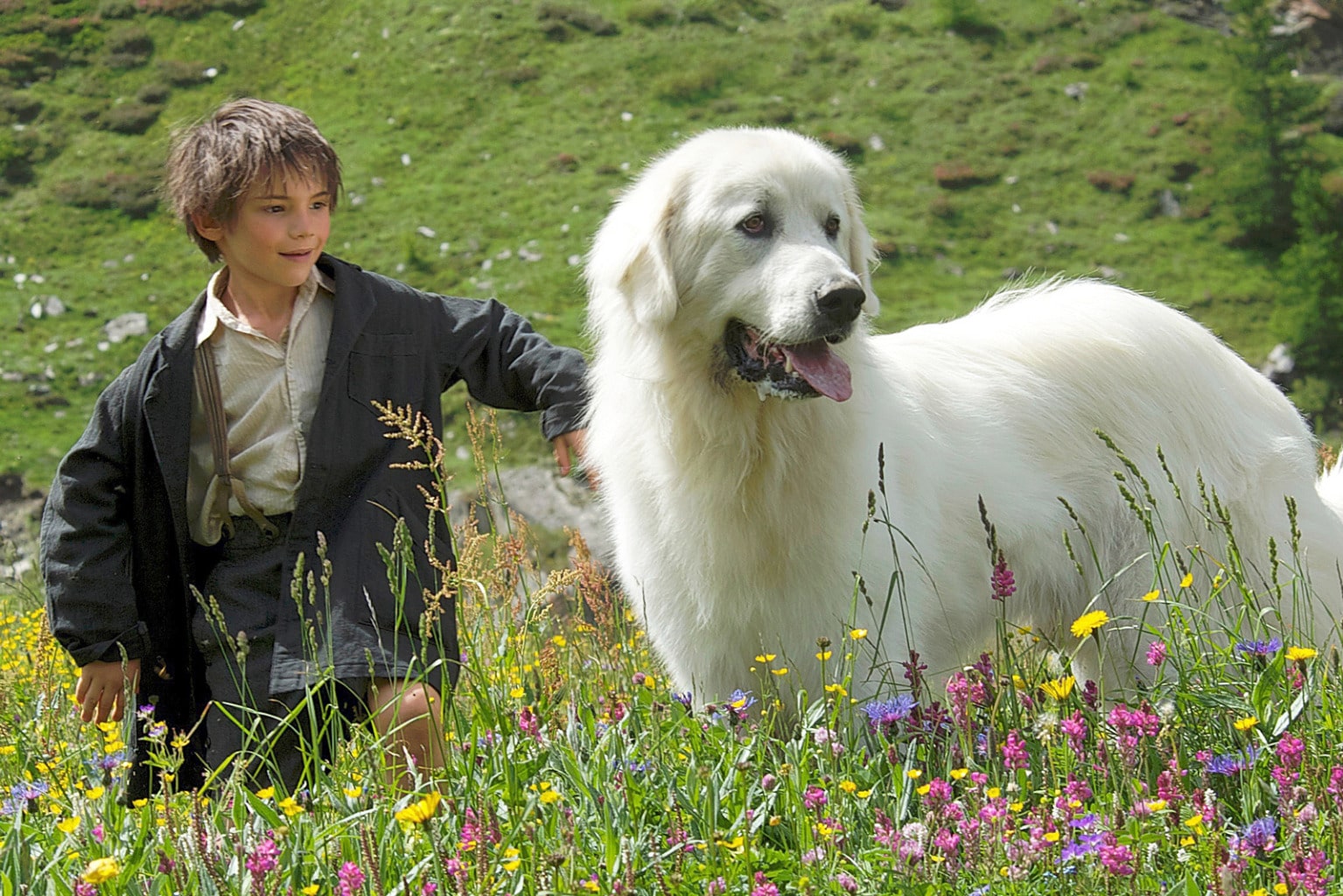 “Belle et Sébastien” (“Belle and Sébastien”) tells the wonderful story of a friendship between a young boy and his dog amid the chaos of World War II. The story is set in the Alps, which makes for amazing visuals. Besides, the movie is directed by Nicolas Vanier, a French adventurer, explorer and lover of the wild.

This movie is poignant and emotionally striking. Prepare to be moved.

Since the story focuses on a young boy, the level of French spoken in the movie is relatively accessible, which makes it a good watch for basically anybody learning French. 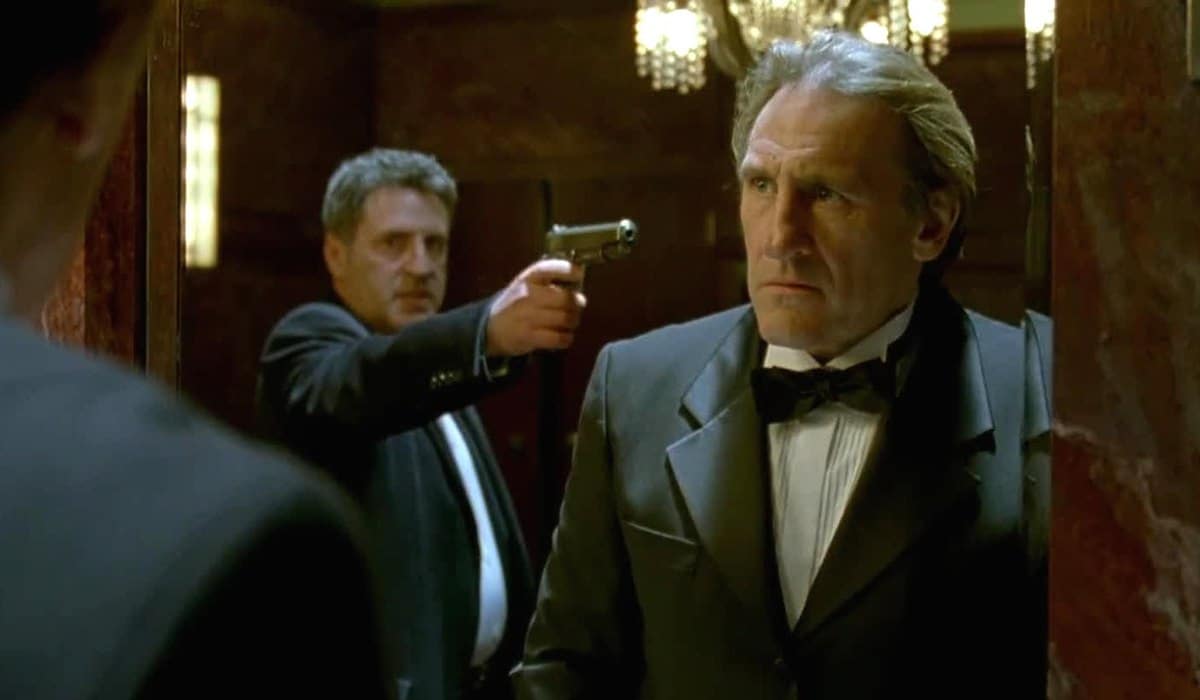 If dark, gritty police movies are your thing, then I have good news for you. “36, Quai des Orfèvres” (“36, Goldsmiths’ Quay”) is often hailed as France’s response to Michael Mann’s classic “Heat.”

Two high-ranking police officials with different goals, motivations and methods go toe-to-toe in order to solve a particularly intricate case. Both hope to succeed to the head of the “36,” which handles some of the biggest and most serious crimes in Paris.

It’s tense, violent and seriously thrilling. It also features two of the most talented French comedians ever in Daniel Auteuil and Gérard Depardieu. “36, Quai des Orfèvres” is best suited for mature audiences and intermediate or advanced learners because of the somewhat intricate themes the movie explores. 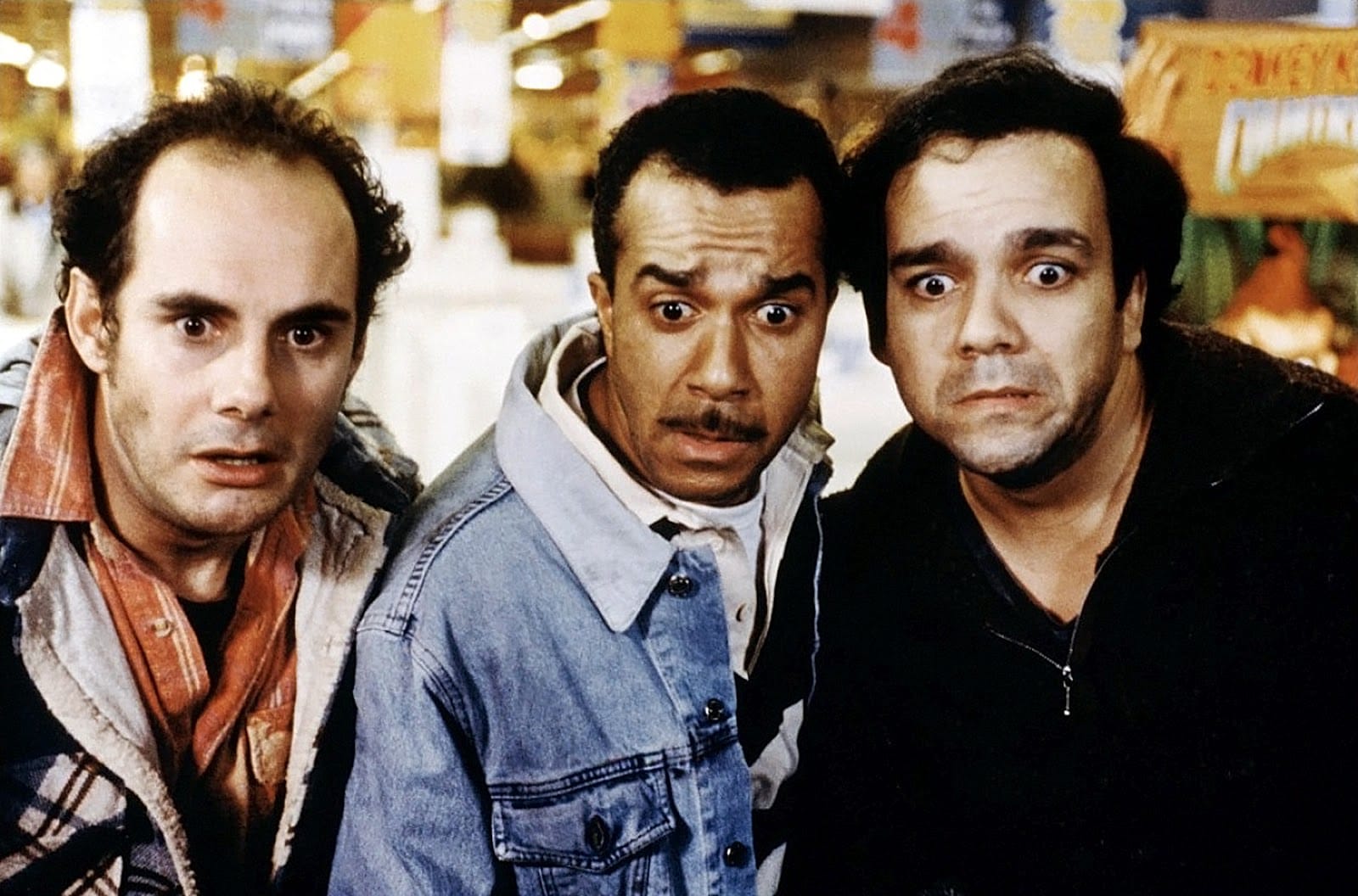 How would you react if, overnight, someone told you that you have two brothers you’ve never met… and on top of that, you’ve inherited millions of dollars?!

That’s the premise of “Les Trois Frères” (“The Three Brothers”), one of the few comedies that’s managed to stay relevant to France’s cultural legacy over the years. The movie experienced a tremendous success when it got released in theaters in 1995, and even today people love it as much as the first day.

This is a wonderful movie to pick up everyday vocabulary, expressions and slang as well as to get immersed in French popular culture. Oh, and it’s freaking hilarious! 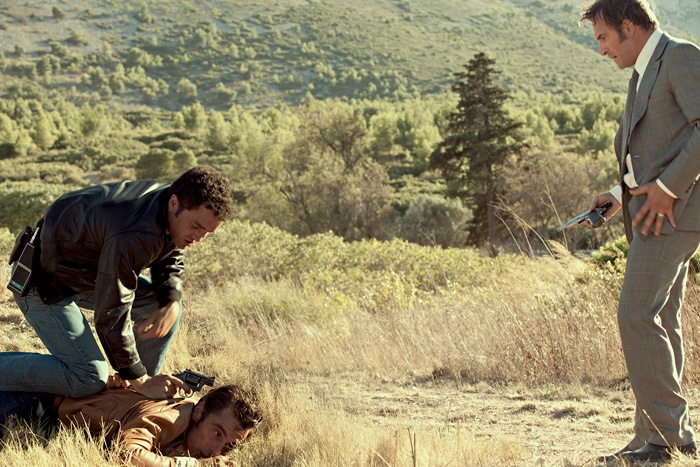 The French Connection. This mythical name refers to the organized heroin traffic that plagued the French Riviera for more than 30 years.

Pierre Michel (Jean Dujardin), a recently dispatched judge, wants to halt the criminal activities of the French Connection and put drug kingpin Gaëtan Zampa behind bars. He’ll soon learn that he’ll have to change his methods if he ever hopes to catch the elusive drug dealer.

“La French” (“The Connection” — literally “The French”) takes you on a visceral journey into the French Connection underworld. Suspenseful and rough, it sucks you in from the get-go.

Blending both conversational and formal language, the movie can be watched by learners of any level. 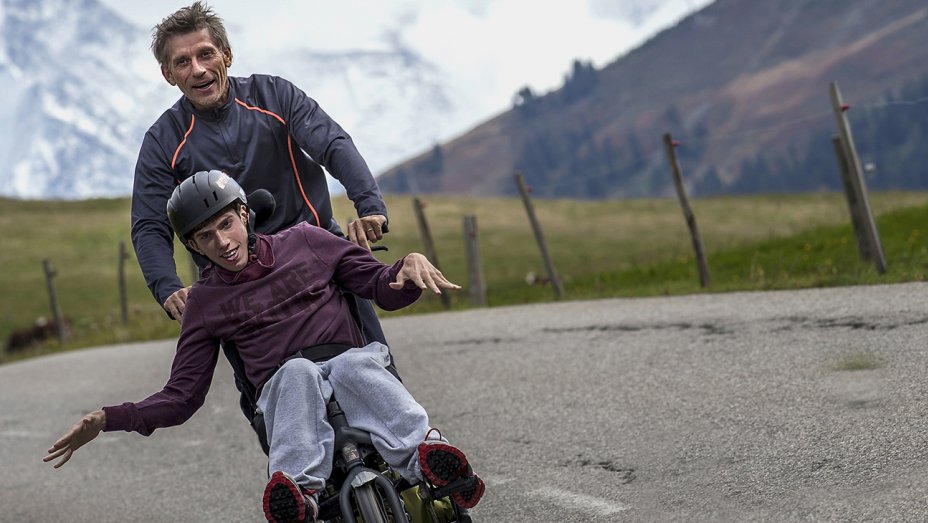 Julien lives in a wheelchair, and yet, the teenager has dreams of thrilling sensations and adrenaline rushes floating in his head.

The eager teen challenges his father to participate in the Ironman triathlon of Nice, one of the most physically taxing races in existence.

The road to the Ironman will be long, tough and filled with hardships, but Julien and his whole family won’t back down from trying to achieve his dream.

“De Toutes nos Forces” (“The Finishers” — literally “With All Our Strength”) is a moving story and a formidable lesson of courage. You’ll find yourself rooting for Julien until the very end. Overall, the dialogue is fairly accessible, making it a relevant watch for anybody who’s interested in acquiring sharper grammar, vocabulary and pronunciation skills.

There you have it.

A solid (and fun) plan to accompany you through your studies!

Combining traditional lessons with movie-watching is a sure way to give you a decisive head start in your French learning journey. Make sure you’re following the guidelines highlighted above to get the most out of your watching experience.

Pick a movie you love or are deeply interested in, get comfy and get ready to kick-start your skills!