How to Think About Cases in French: The Superhero’s Guide

Why would you touch a hot stove?

Why would you sign up for an 8 a.m. class on purpose?

Why, oh, why, would you ask about grammatical cases as a French student?

If you study a language like Russian or German, cases are bound to be the bane of your existence.

At least, that may be what you’ve been told.

The truth is, there are some words in French (and English) that change according to case. Most notably, pronouns. They’re just not usually taught in terms of case.

But actually, understanding how case works with French pronouns can be really useful.

Think about how confusing and irregular a language French is. How often do you have to learn something “just because?”

Imagine you could look at the language in a different way, with a slightly shifted perspective, and understand the why behind it even a little bit better.

That would almost be like having a superpower, wouldn’t it?

And if you had that superpower, the real question is, why, oh, why wouldn’t you use it?

In this post, we’re going to look at what a basic understanding of cases can do for you as a French learner.

What Exactly Are Cases, Anyway?

Disclaimer: I’m not a linguist, so anything I say below comes from a general idea of how cases are commonly talked about in the world of language learning.

In essence, in languages that use cases, nouns (and often pronouns, adjectives, etc.) shift according to the role they play in a sentence. In order to show what I mean, let’s pretend for a moment that English uses cases for its nouns. Take the word cat:

The cat is on the bookshelf.

In this sentence, “the cat” is the subject. The focus is on the cat and, in this situation, where it’s located. Now look at this sentence:

I fed the cata.

That’s not a typo or a bad attempt at an Italian accent. I’m trying to show you what it might look like if English nouns shifted according to case. Here, the cat isn’t the subject, “I” is. I am doing something to the cat. So in this completely fictional language scenario, “cat” has become “cata” because of its changed role.

In a way, this gives the noun power—your attention is drawn more fully to its state than its placement. It’s not just a passive entity receiving meaning from the context of the words near it. It’s telling you what it is and what it’s doing.

If that seems weird, here’s a real example:

He is on the bookshelf.

“He” changed to “him,” but “cat” wouldn’t normally change in the same way, right? That’s because in English, we inflect personal pronouns for some cases, but we don’t do the same with common and proper nouns.

If you’re still confused, this video from Langfocus is a good general introduction to cases.

If you can learn to think of French pronouns, along with other French nouns, as shifting their identities or presentations rather than just following rules around their placement, it might help you see them as superpowered beings rather than words that require fussy changes. It might help you learn to perceive and understand personal pronouns faster in sentences and to process French grammar more efficiently in general.

How to Think About Cases in French: The Superhero’s Guide

Again, since French isn’t normally talked about in terms of case, you don’t need to memorize the exact terminology below. In fact, if you try to talk to someone about French using terms like “the accusative case,” they might not have any idea what you mean, even if they know quite a lot of French.

Also, while our focus will mainly be on personal pronouns, we’re only going to be looking at the general concept of case usage in French. You can look at this post to see how all the personal pronouns change for each grammatical situation.

The nominative case, also sometimes called the subjective case, is used when a word is the subject of a sentence, as with our first “cat” example above:

I kind of do. I’ve never had one, but why wouldn’t you want to eat cake out of a cup, if you could? Anyhow, in the above sentence, Je (I) is in the nominative case because it’s the subject of the sentence. Simple enough, right?

But think about it. If you see the word je in a French sentence, just like if you see the English word “I” in a sentence, no matter where it appears, you know that the sentence, or at least that part of the sentence, revolves around that word. If I say, “I want a mugcake,” I’m talking about myself and what I desire. There isn’t room in that sentence to think about what the mugcake wants or what else it might be doing.

If I went full Yoda and said, “A mugcake I want,” you might correct my word order, but you wouldn’t be confused about my meaning.

It’s true that if I said “Me want a mugcake,” you’d probably come away with the same conclusion, but this is because of how ingrained word order is in English (and also because of Tarzan).

Whereas if I said, “A mugcake me want,” then you might not be so sure. You’d assume from context, sure, but it’s more of a stretch.

The point is, putting a pronoun into the nominative case helps secure its position as the focus of the sentence, even in languages like French and English.

The genitive case is generally used to show possession. It’s sometimes called “the possessive case.” Let’s look at it in this example: 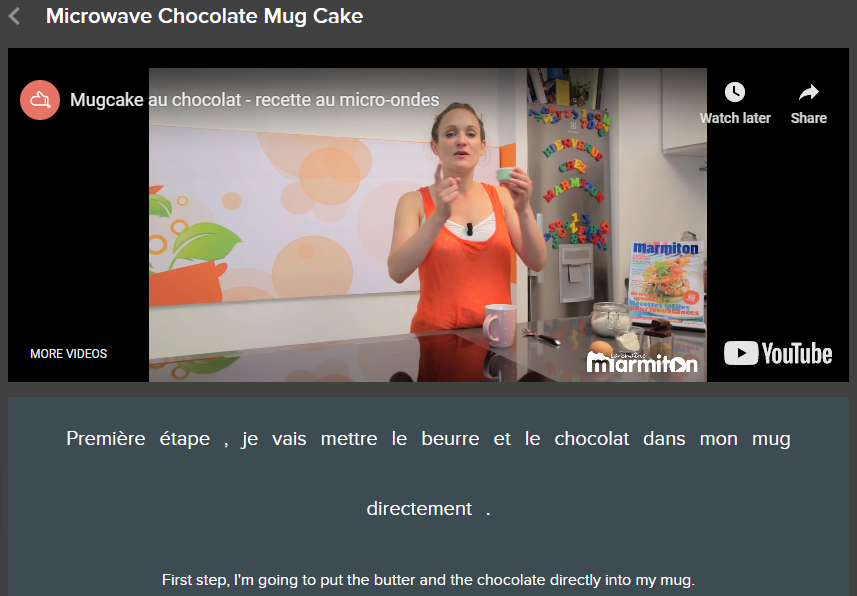 Here, we have another example of the nominative case with je, and then we have mon, which shows possession of the mug.

Consider what the word mon is doing here. If we didn’t have it, we would either have to repeat the word je in front of mug, making the sentence cluttered and unfocused, or we would have to say something like le mug de moi (the mug of me/mine). Mon encompasses all of that. It imparts multiple words’ worth of information in one shot.

When you look at it that way, mon can also be seen as a variation of je rather than a separate special word you have to memorize. It’s there to make things easy and to give you the power to create meaning efficiently.

Note: Unlike in French, not just pronouns but proper nouns in English inflect for possession. For example, if I’m holding a mug and you say, “Is that your mug?” you need to inflect the default nominative “you” to “your.” If the mug belongs to my cat Charlie, I might say, “No, it’s Charlie’s.” In this way, I’m inflecting “Charlie” to “Charlie‘s” to indicate possession.

Now, what if you take your superhero laser and aim it directly at me? Or just hit me with your piercing X-ray vision?

Let’s take an example from this funny cat video, where a cat with a box on its head is supposedly saying: 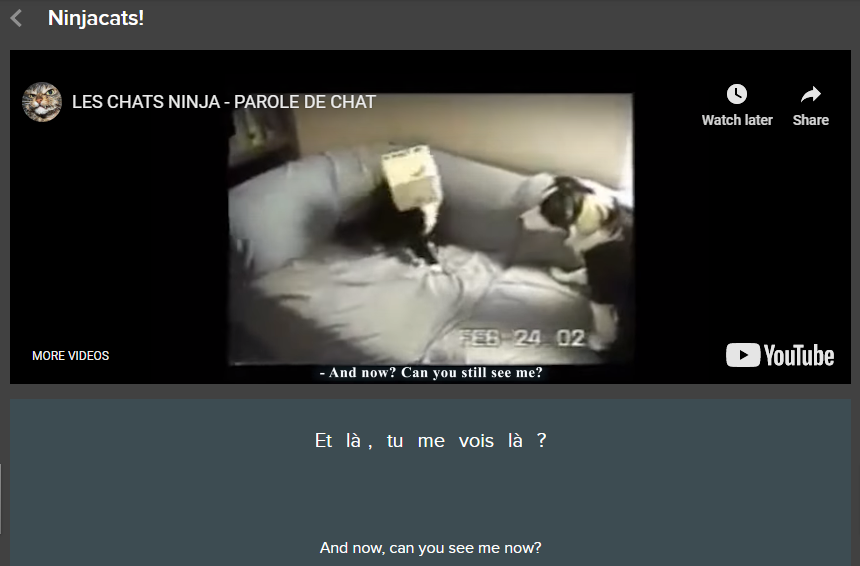 Here, we have me in the accusative case. We can think of me as yet another variant of the personal pronoun referring to “me,” “I,” etc. The cat “speaking” in the first person is the direct object being acted upon—in this case, seen—and me makes that clear. You can think of direct object pronouns as being words that are pulling the action of a sentence towards themselves.

It’s Stressful Being a Superhero: The French Prepositional Case

We’re in shaky, conceptual territory at this point because French doesn’t exactly strictly have a prepositional case. The proper pronoun to use after a preposition in French is a stressed pronoun, and stressed pronouns can be used in a variety of contexts. They might, in fact, be what you think of as the most basic form of pronouns. For example, moi (me), toi (you), etc.

It just so happens that one of the ways in which we use these words is after a preposition, as in this amusing video where Boris from L’Obs asks Siri a life-changing question: 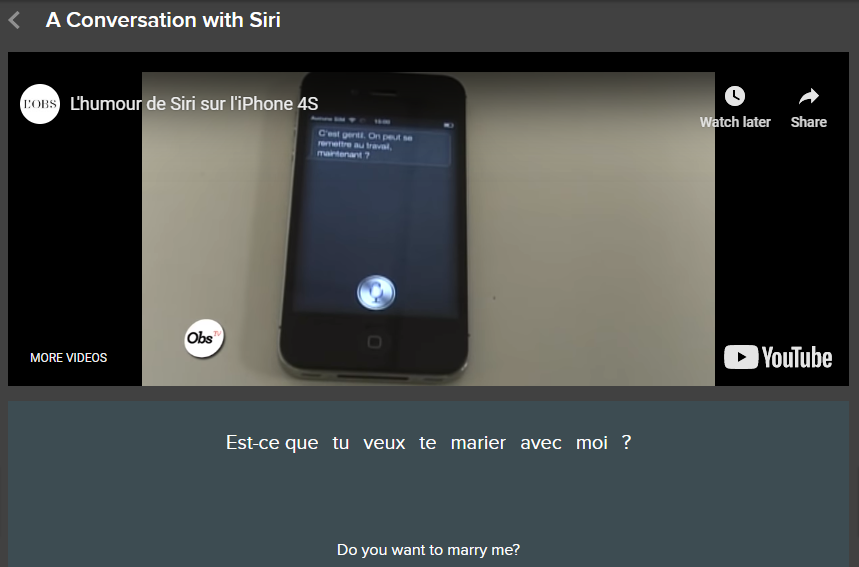 In the French, the question is literally phrased as “Do you want to marry with me?” So, rather than use a direct object pronoun, we use a stressed pronoun.

Again, we’re stretching the concept of cases here to show that there’s a specific form a word takes after a preposition, even if that form isn’t exclusive.

Sometimes, we need to show an action happening towards an object but with an extra step in between. That’s where we meet the dative case.

For example, if I ask you to give me the mugcake and you do, I could say:

Tu me donnes le mugcake. (You give me the mugcake.)

Here, we can consider that while French common and proper nouns don’t shift the same way as in other languages, recognizing that a noun has undergone a shift can be helpful. For example, the word “mugcake,” in French or English doesn’t change no matter where we put it in a sentence. Or, it doesn’t seem to. The truth is that when a word changes function, it is different in a sense. Languages like French and English just often allow us an illusion of sameness, which sometimes can make understanding different parts of grammar harder.

Getting stuck in one way of thinking can make life seem more difficult than it really is.

Thinking that the only way to make a cake is in the oven, for example.

If one day you find out it’s possible to make a cake in the microwave or to think of French in terms of case, it really can be like discovering you have a superpower.

It might just change the way you see the world forever, which can be both freeing and frightening.

But don’t worry! As long as nothing explodes, you’ll probably be fine.

Elisabeth Cook is a writer, so she doesn’t have time to bake but does have time for Twitter (@CooksChicken). She’s considering trying the mugcake recipe for real but is afraid her cat Charlie, who once ripped off the end of a baguette and devoured it, will interfere.