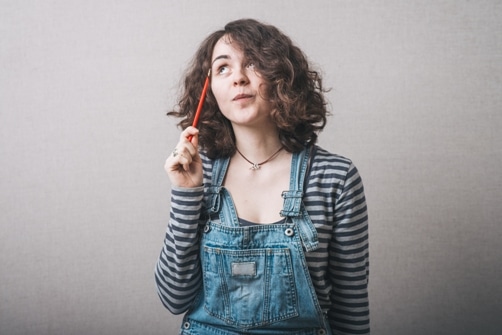 I thought my French was much better than it really was…before I went to France for the first time.

Even after several years of study, I could barely keep up with conversations!

Maybe you already know you need to improve in French.

That’s great, but do you know what you need to improve in specifically? Speaking? Reading? Writing?

If only there were a way to objectively evaluate your skills in every aspect of the French language.

Lucky for all of us, there is.

The Test de connaissance du français, or TCF, is a French knowledge test administered by the Centre international d’études pédagogiques, or CIEP, an institution linked to the French education ministry.

Why Take the TCF?

It lets you know your strengths and weaknesses

By taking the TCF, you’ll see where your strengths lie and where you need more work, since each section tests a different skill. When I took it for the first time, I realized that I understood spoken French pretty well, but that I needed to improve my knowledge of French grammar, giving me direction for furthering my studies.

Employers may require it

If applying for a job that includes speaking French—say translation, international sales, NGO, the list goes on—your employer may want to confirm the skills you claim to have on your resume.

The TCF may be needed to study at Francophone universities

Many universities use the TCF to verify that applicants have sufficient language skills to pursue their studies. Usually, the minimum accepted score is in the “intermediate” range, which, if you speak French well enough to consider studying in a French-speaking country, should be completely attainable.

Governments use it when screening potential immigrants

In Quebec, potential immigrants can take the Quebec version of the TCF to prove that they speak French.

What Is Tested (and How to Study)

The exact sections on the test will vary according to which version you take and what optional sections you might choose, but the main version of the TCF includes three required subjects: listening, proficiency in language structures and reading.

Understanding the basics of the test is great, but so far I haven’t described anything that you couldn’t have learned with a little online research on your own. After all, you want to know how to attain the best score possible! How do you study for a test that encompasses so many subjects? Everyone has different study habits, but I’ll elaborate on some study methods that worked for me.

Oral comprehension is broken up into several sub-sections. Section 1 tests understanding of how audio clips relate to a given image. Section 2 tests understanding of “minimal exchanges related to real life situations.” In Section 3, your understanding of small conversations between Francophones is tested. Finally, in section 4, a clip along the lines of a speech or a radio news report is played—and you answer one or more questions about its content.

Some of the questions and content might seem easy, but some will probably be more difficult (realistic) with background noise, fast speaking or different accents. Make sure you listen very carefully, because you only hear the clips once!

How to study for this part of the test: Listen to French audio clips without repeating.

This may be the most frustrating aspect of your studies, but it’ll help a lot: Listen to audio clips without replaying them, even if you don’t understand them. During the TCF, you can’t repeat the audio clips, so you have to boost your initial understanding. Preferably, find “realistic” audio with regional accents and background noise.

TCF audio clips can last anywhere from a few seconds to several minutes. Also, CIEP offers several actual practice questions to give you an idea of how this part of the test is structured.

This section tests your knowledge of French grammar and vocabulary. Usually these questions take the form of completing sentences with the appropriate word or phrase. Areas that may be tested include proper conjugation, use of the subjunctive, spelling, etc. This section can be tricky because the multiple choice questions may have two very plausible-seeming possibilities.

How to study for this part of the test: Use practice problems and additional resources.

Again, there are questions on the official site you can use to practice. The information here is invaluable to understanding what sorts of questions can be asked.

Possibly less stressful than oral comprehension, the reading comprehension section tests how well you read French. Several excerpts are presented, from single sentences to entire essays with multiple choice questions concerning either their subject or specific information found in the passage.

Questions I’ve encountered have included newspaper clippings, speeches, letters between family members, product manuals, tourist brochures and public announcements. Although the time is limited, at least here you can reread the passages. More than one question may be posed depending on the length of the excerpt.

How to study for this part of the test: Practice reading French quickly.

Given enough time, you could read almost any French text, because you can reread and guess word meanings from context. The TCF is timed (29 questions in 45 minutes for the reading section), however, and you’ll only have a small amount of time (a little over a minute) you can spend on each question.

You can most likely read English quickly and understand it without rereading; that is also how you want to read French. Try reading forms of writing that have a good chance of showing up on the TCF, like news articles or historical speeches.

Also, TV5Monde and RFI offer their own TCF practice problems here and here.

Two optional subjects are also given, and they may be required depending on your reason for taking the TCF. These are Speaking and Writing, where you’re judged on your active language skills—meaning your ability to speak and write French, respectively.

The Speaking section takes the form of a face-to-face recorded interview with an examiner. The examiner can ask you questions about almost anything, so the trick is to think on your feet. Some questions may be general, such as “Tell me about yourself,” and others more specific, like “I run a charitable organization. Ask me questions about how it’s run.”

Inevitably, you’ll forget some of your vocabulary when speaking, so don’t try to impress your examiner with recently learned advanced words. It’s better to err on the side of caution, using familiar words to keep the conversation flowing.

How to study for this part of the test: Admittedly, this is not an easy task to study for. Apart from conversation groups and finding language partners, I like to simulate the test environment as if it were an interview.

On YouTube channel QuestionEntretien, job coach Yves Gautier asks several questions geared towards people preparing for job interviews with sample answers. You’re not going for a job interview, but the preparation is similar. Pause the videos and respond to the questions, keeping in mind that the TCF interview is only 12 minutes long, so you want to be confident in your answers and avoid hesitations.

The second optional section is Writing, where you’re asked to write about three scenarios, such as “a hypothetical vacation you just took.” You’ll have 60 minutes to complete the three scenarios, and your writing will be sent to CIEP headquarters for grading.

How to study for this part of the test: The best way to practice for this is to just start writing. The prompts will ask you to write in different forms such as formal essays, blog posts, news articles, etc. Each format has a different “tone,” so you can’t, for example, write a blog post as a letter to your grandmother! Try writing for different audiences. Keep a journal for yourself, find pen pals, join a forum for Francophones or even start a blog in French. The more you write, the easier it’ll come to you. Although you may be asked to write about almost anything, the CIEP provides sample topics presented in the test format here.

How Is the TCF Scored?

Each section is scored individually on a scale of six levels: beginner (A1, A2), intermediate (B1, B2) and advanced (C1, C2). Your final score is the average of your subsection scores. If, for example, you do very well in everything except one subject, you can still score well.

After your test, your examiner will show you your preliminary score, and your official score sheet will arrive by mail after a few weeks. The score sheet includes your overall score from A1 to C2 along with each subsection score. The results are valid for two years, and the expiration date is shown. A detailed summary of each score for each subject area is presented graphically.

Different Varieties of the TCF

The TCF comes in several flavors.

This is the basic TCF including the three required sections destined for people who want to validate their French knowledge for personal or professional reasons.

This is a version of the test for potential first-year undergraduates at French universities who aren’t qualified by some other means.

Since 2012, this version of the TCF is one of the accepted ways of meeting the requirements for the minimum level of French required for citizenship, B1.

This version of the test is available for anyone wishing to obtain a visa for permanent residence in Quebec who doesn’t have other qualifications.

Taking the TCF on a computer

If you take the TCF this way, you’ll be led into a room with a proctor where you’ll have access to a computer and headphones. I recommend it, because you’ll receive a preliminary evaluation on the spot from your proctor along with an explanation of the results.

Once you’ve found an authorized test center near you and you’ve registered and paid, you’re assigned a time slot. Note that the cost depends on the test center, but you should probably expect to pay at least around $150. On test day, try to show up at the test center at least 30 minutes before the test because you’ll have to sign in. Don’t forget your registration and identification.

From the minute I set foot in the building, all interactions took place in French, from test instructions to chitchat with the secretary in the waiting room.

Be prepared to read and listen to all instructions carefully. You won’t have the opportunity nor the time to redo old problems if you realize that you didn’t follow directions. The first time I took the test, I thought I could go back and change my answers during the oral component after having listened to the clip, which I couldn’t, so I lost some points.

It’s true that standardized tests are stressful, but they’re a part of life. The good news is that there are no “curve balls” on the TCF because it was conceived to measure your skills against known benchmarks. If you studied French in college, you’ve most likely encountered questions very similar to those asked on the TCF.

As long as you’re enthusiastic about French, by practicing the language in general, you’re already studying for the TCF.

Moreover, you don’t have to be an expert to take the TCF; even beginners can benefit from seeing where they stand.