Pluperfect Your French: An Intro to the French Pluperfect

And yet learning French requires a perfectionist’s attention to detail.

French is full of pesky little pronunciation nuances and homophones that can trip up even the most attentive among us.

Not even to mention all the exceptions.

This is the challenge of the language, but also its charm.

The moments when you start seeing the subjunctive as kind of fun, when the pronouns y and en no longer make you sweat and when you’ve stopped wavering between whether to use the imparfait (imperfect) or the passé composé (the perfect past) are all (or will become) important landmarks in your French language journey.

But let’s dwell on the past a bit. No, no, I’m not talking about airing dirty laundry or those skeletons in the closet! I’m talking about the past tense, which is quite nuanced in French.

You already have to be a real perfectionist to truly get the hang of the difference between the passe composé and the imparfait.

But if you want to get really serious (more than perfect, dare I say?) about your French, you’ll need—in addition to fancy constructions like the French causative—the plus-que-parfait (pluperfect, or more-than-perfect).

To fully master French, it’s not good enough to be perfect, you have to learn to be more than perfect.

Fortunately, that’s not as hard as it might sound.

So What Is the Pluperfect? And What Is It For?

This latter action may be either explicitly mentioned or implied. If it’s explicitly stated, it’s usually expressed in the passé composé or in some cases the imparfait.

How Is the Pluperfect Formed?

The pluperfect is a compound tense, which means it’s comprised of an auxiliary verb and a past participle. In the pluperfect, the auxiliary verb is conjugated in the imparfait, which has several uses, one of which is to describe events in the past that happened for an undetermined amount of time.

For the negative construction of the pluperfect, the negative structure (ne … pas, for example) always goes around the auxiliary verb and immediately before the past participle.

Let’s take a look at some examples, shall we?

Here are some cases in which the latter action is explicitly mentioned:

J’avais déjà mangé quand tu m’as invité au restaurant. (I had already eaten when you invited me to the restaurant.)

Now let’s take a look at the negative constructions:

Je n’avais pas encore mangé quand tu m’as invité au restaurant. (I had not yet eaten when you invited me to the restaurant.)

Here’s an example where the latter action is implied:

A sentence like this relies heavily on context. It could be a response to the question, “Why didn’t you pick up the phone?” and the implied action that happened after this would be the telephone call.

If the action were to be explicitly stated, we could write a sentence like this:

J’étais déjà sorti quand tu as téléphoné. (I had already left when you called.)

The Pluperfect and the Past Conditional: A Match Made in Heaven

The pluperfect is also used in si (if) clauses to express a hypothetical situation in the past whose result is contrary to what has actually happened. Using the pluperfect with si clauses can also convey a sense of regret or the wish that something had happened, but didn’t.

Si tu m’avais demandé, je serais venu. (If you had asked me, I would have come.)

Si j’avais su, je l’aurais aidé. (If I had known, I would have helped.)

When Do We Not Use the Pluperfect?

In most cases, the pluperfect in English and in French overlap, which is really convenient for Anglophones learning French. Unfortunately, though, this is not always the case. Here are two cases in which the French and English pluperfect do not overlap. Keeping them in mind is essential for developing fluent-sounding French.

In French, depuis (since) is usually used with the imperfect (and not the pluperfect). In its English translation, the pluperfect would be used.

The construction avait attendu would not work here.

Again, the pluperfect construction would not be used here.

In both cases, think about the temporal dimension. The actions in the first clause (the readers’ waiting for Foenkinos’ new book and Aurélie’s lying down) are not necessarily completed, but rather ongoing. The first sentence implies that David Foenkinos’ book is not yet out. In the second case, there’s a bit of ambiguity regarding whether Aurélie answered Michel’s call or not.

If Aurélie had already laid down (and then gotten up, as in a nap), when Michel called, we would use the pluperfect and the sentence would be:

Checking out reference guides, listening to podcasts and doing quizzes are surefire active ways to perfect your pluperfect skills. Here are a few good resources to use.

Nothing like a good old-fashioned grammar book to perfect your pluperfect chops. 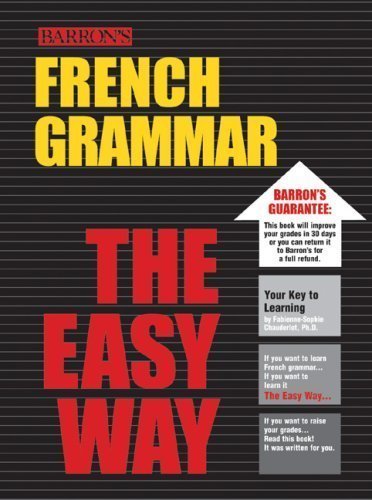 “French Grammar the Easy Way” by Fabienne-Sophie Chauderlot has a really great chapter on the pluperfect complete with a diagram detailing the chronology of le passé composé, l’imparfait and our friend le plus-que-parfait, making it ideal for those of you who are visual learners.

Another great resource is “The Everything French Grammar Book: All the Rules You Need to Master Français” by Laura K. Lawless, an oldie but goodie. What’s great about this work is that it’s written by a non-native French speaker, which means she’s aware of the difficulties English speakers may encounter when learning French grammar such as the pluperfect.

Once you’ve got the pluperfect down pat in theory, it’s important to get comfortable with it in action. Listening to native podcasts is a great way to do this.

Along with picking out instances of when the pluperfect is used, another good exercise is to listen to a podcast all the way through while taking notes on the chronology of events mentioned. Afterwards, imagine you’re summarizing what you’ve heard, using the pluperfect when applicable. Not only will your listening skills improve, you’ll also improve your cultural literacy.

Online French quizzes are a great way to test yourself on the pluperfect as well as the past participles of verbs.

To get started, check out this quiz, in which you practice translating expressions such as “I had done” and “I had wanted,” as well as this quiz on irregular past participles.

You’ll kill two birds with one stone: Not only will your plus-que-parfait be perfect—your passé composé will be jammin’ as well.

Well, that covers the pluperfect.

That is, after all, what makes perfect—or, should I say, plus-que-parfait.