French audio courses are actually often overlooked as a good way to learn French, but as you’ll see below, they really do the trick.

1. Learn in Your Car French: The Complete Language Course

You don’t necessarily have to learn this in your car, but you may log some good time there. This nine-hour course is divided into three levels and is pretty straightforward. It includes a text overview of each audio lesson, which can be helpful when you’re reviewing (though remember kids, no reading in the car).

It covers a ton of vocabulary, all the need-to-know tenses (present, past, future, subjunctive) and talks you through the kind of situations that you’re bound to get into while traveling.

The course is comprehensive—but fast—so if you’re using it, it’s a good idea to listen to certain lessons multiple times and use immersion tools to supplement. It pauses to allow you to answer questions, so you can have fun talking to yourself in the car with this one.

Recommended for: Those who want to learn French, but are busy being busy.

2. Behind the Wheel French 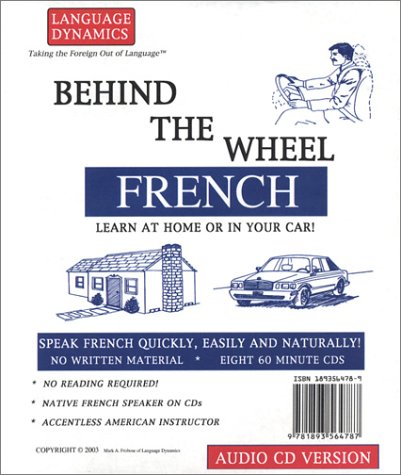 Everyone loves a French audio course that starts with an accordion!

This course’s method tricks you into building your own sentences based on things you have learned. You learn with Celine (no, not Celine Dion, sigh), with whom you’ll pronounce beautiful French words. It can serve as a great way to review your French if you’re rusty or working with half-functional high school French. It also covers quite a lot of idioms.

Behind the Wheel doesn’t just list off endless random vocabulary, but shows you how to use them (no use listing off French words in France with no context). It also concentrates on the most used words in everyday French, which is helpful for obvious reasons. It’s made with commuters in mind, hence the name.

So if nothing else, make sure to pop this one into your car’s CD player and see where it takes your French. If it tickles your brain’s fancy, you can buy all three levels.

Recommended for: Learners trapped in a car who want to make up their own sentences.

The man, the legend, Michel Thomas. A little background because he’s so cool: a decorated World War II veteran, he survived concentration camps and later worked for the U.S. Army Counter Intelligence Corps. Later on, after introducing his language learning method, he became a world-renowned linguist.

Now, if all this backstory doesn’t already have you downloading everything he’s ever made, then let’s dig into what exactly this method is.

You’ll listen in as Michel Thomas teaches two students. And though some claim his accent to be bizarre, I find it (and his tone) oddly soothing. As the third student, you participate as he talks with his students and asks them questions. He builds off of sounds and vocabulary bit by bit, and you almost don’t even realize how much you’re learning due to the relaxed vibes.

And with the Total, Perfect or Masterclass editions of his French audio courses, you can get to a pretty high French level. Or, if you’re an intermediate learner and need to review, you can gain a lot from his higher-level courses. Let this man soothe you into learning French with audio—trust me on this one.

Recommended for: Literally anyone willing to give French audio courses a try. 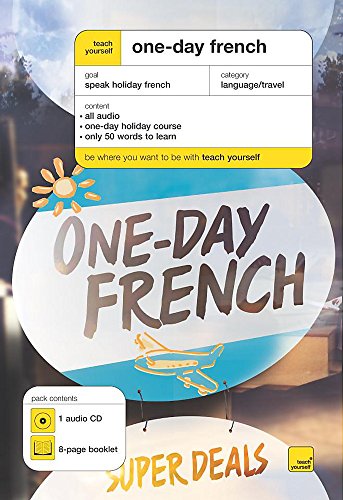 You only have one day to learn French—what do you do? Well, that certainly is a pickle to be in, but with this audio course you’ll learn the bare basics in 75 minutes.

Hopefully, once you’ve blasted through this course and returned home from your last-minute trip to France or Quebec, you’ll be inspired to continue forward. No language can be mastered in one day, let’s get real.

One-day French with Elisabeth Smith has a cute storyline for you to follow along with. On a plane from London to France, Elisabeth is challenged by the passenger next to her to teach them enough French to get by on their holiday. Apparently, she succeeds.

This French learning audio course also includes a booklet with a written account of the CD, so you can see everything spelled out on the plane ride over.

Recommend for: Flabbergasted folks who leave for France tomorrow. 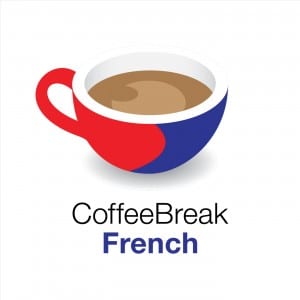 The word “coffee” just makes you want to try this one, doesn’t it?

This French learning audio course is also available as a podcast on iTunes, and is the perfect length, roughly about the time of uhm, a coffee break, for each episode. With four seasons, this fun course is good to pick up in Season 1 if you have no French knowledge, or in Seasons 3 or 4 if you’re transitioning into intermediate or need a refresher.

If you get weak in the knees at the sound of Scottish accents, then you’re in luck. The course is presented in such a relaxing manner as Mark and his student Anna discuss the French language and go over vocabulary. It goes at a nice and easy pace, and may go even easier if you drink a ton of coffee while you do it.

Recommended for: Those who want to casually take a whack at audio courses. 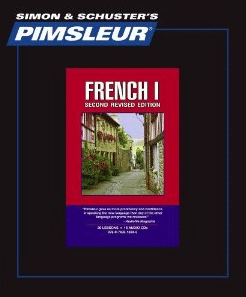 Dr. Paul Pimsleur is another big name in the language learning world, so get ready to learn from a master. Unfortunately though, this one doesn’t come with a soothing voice quite like Michel Thomas’. He takes you through dialogues, breaks them down and most importantly, concentrates heavily on pronunciation.

Like a lot of audio courses, you’ll be asked to speak and break down the sounds (Yell the French words! Scream them!).

The French audio lessons are only 30 minutes each, making it a very manageable amount of time to spend per day with Pimsleur. Everything is introduced naturally, by situation, so if you have a fear of information dumps, then Pimsleur is your guy.

This isn’t the best tool for in-depth grammar lessons (hey, that’s what textbooks are for), but it can get your vocabulary in check.

Recommended for: Beginners whose French pronunciation is ghastly. 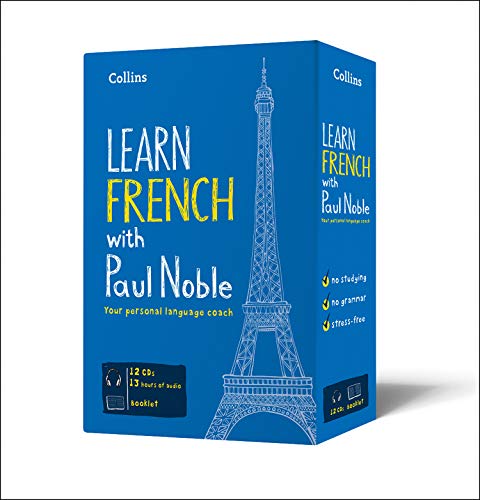 This guy is a language “guru.” His method is similar to that of Michel Thomas, which really does qualify him as a French language guru. The big difference here is that Noble cuts more to the point than Michel Thomas, so if you want something more soothing then go with Michel, and if you’re a no-nonsense kind of learner, then go for Paul Noble.

You’re put into role-playing situations, which is always fun and informative. In addition, the audio course makes sure that you’re learning more than just how to talk about yourself and in the present tense. It presents many tenses, and in first, second and third person.

Recommended for: Learners who ain’t got no time for no nonsense! 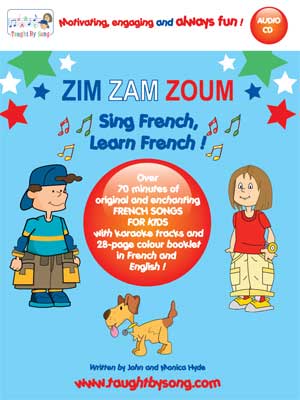 All you chanteurs (singers) out there were probably wondering when I was going to tell you to clear your pipes. This CD is made for kids, but will get them (and maybe even you) singing in French and learning basics. This 70-minute CD is by no means comprehensive, but will certainly inspire your kids to learn more French or maybe even put you in the mood for one of these other audio courses.

It covers greetings, likes and dislikes, family and pets vocabulary, counting, weather, the days of the weeks and all kinds of French goodies. You sing along, and can even read along in the colorful book it comes with. Just hope that whatever kid is in your car and singing along has some singing talent, because they’ll want to listen to it over… and over… again.

Recommend for: French language learners with kids or who are kids at heart.

Why Learn French with an Audio Course?

It’s so Easy a Monkey Could Do It

Well, I’m not sure a monkey would understand everything that’s going on, but you get what I’m driving at. The nice thing about a French audio course is that you hop into your car and pop in the CD, or download it onto your MP3 player and just… listen (and speak along).

If you spend a lot of time running or driving, then you suddenly are making better use of your time just by incorporating a French audio course into your schedule.

It’s almost like… magic! Well, not really—you do need to pay attention. Listen to French audio lessons in the car, on your bike, at the gym, at your in-laws’, in bed, while you eat, while you box, while you garden, while you do a puzzle, on the roof, in the basement and—well, you get it.

It Gets Your Ears All Trained Up

French can pose some challenges for English speakers in the listening comprehension department. English (especially for English speakers) sounds like separate words, not so flowing. When you first start learning French, it can all sound like one, long, never-ending word.

With a French audio course, you’ll learn language concepts while listening to French and building those comprehension skills. It’s something textbooks can’t offer.

Many of the French audio lessons also break up words to help you understand, and once you’ve graduated from French audio courses, your ears will be ready to take on French music, audiobooks, podcasts, and authentic French audio content on FluentU!

It Gives You a Reason to Talk to Yourself

The best part about French audio courses is repeating what they’re saying. For all you out there who love the sound of your own voice, then this is your ticket. It gives your pronunciation lots of practice, which can often be difficult to find an outlet for if you’re otherwise learning via visual sources.

Many French audio courses concentrate on conversational French (given the nature of audio learning), so not only are the sentences going to be broken up for comprehension, but you’ll be asked to pronounce the individual sounds that make up the word, which is great for beginners.

It’s a Jumping Off Point

By no means are audio courses the be-all and end-all of French language learning. It’s not a good way to improve reading and writing, and it’s not immersion training. But if you’re just starting out and want to ease into French, it’s great to just pop your earbuds in and get started on the go!

You’ll be sure to want more and when you do, there is everything from French books to movies to TV series and more to get you to the next level.

If you’re still hesitant, trying out just a track or two may be a good idea to see if you learn well with a French audio course. Even if it’s not your preferred method of learning, they’re not the “dull and boring” learn-in-your-car courses that you may have imagined.

Plus, I’m sure you can sacrifice listening to your favorite CDs over and over again in your car for 15 minutes of a French “guru” trying to teach you something. The more you learn French audio-style, the more you’ll see that it really does work.