(You Will) Master the Italian Future Tenses with This Guide!

Italian tenses can be challenging at first.

But good news! The Italian future tense is a lot more straightforward than other verb tenses you’ve learned before like present tense, present continuous and commands.

Most of this post will focus on the Italian simple future, but at the end of this piece I will cover the future perfect (a “will-have-done” sort of tense), which is more of an esoteric subject and can easily be skipped for now by those who don’t feel ready.

In any case, if you learn your simple future tense formations well, they will help you enormously with your Italian language communication.

There are only two regular future simple tense formations to learn, fortunately, as the regular infinitives ending with –are and –ere get the same treatment.

Let’s take the example of the verb parlare (to speak) in the simple future. The –are ending is taken off and the following bolded endings are added:

io parlerò — I will speak

noi parleremo — we will speak

voi parlerete — you (plural) will speak

loro parleranno — they will speak

The same will happen with –ere verbs. Take as an example prendere (to take): prenderò (I will take), prenderai (you will take), etc.

Note especially that the future endings for both –are and –ere verbs begin with an e. It is never .

For -are verbs, there are some spelling changes to worry about, but they are the same as you have likely seen with Italian spelling rules for other tenses. The idea is simply to ensure that the pronunciation of the last consonant stays constant.

Now let’s move on to verbs whose infinitives end in –ire. Remember the two groups of -ire verbs that you learned in the present tense? Forget about those groupings for now, as they are both the same in the simple future tense (that is, there is no inserted –isc– in certain conjugations).

We will take fuggire (to escape, to run away) as our example. We take off the –ire ending and add the following simple future endings (note that they are the same as above except for their first letter).

io fuggirò — I will escape

noi fuggiremo — we will escape

voi fuggirete — you (plural) will escape

loro fuggiranno — they will escape

You can save yourself some time when memorizing these by realizing that the –ire conjugations above are actually the same as the first set of conjugations we saw (for –are and –ere verbs), with only the change of the initial e in the ending to an i.

And that’s all there is to forming the simple future verb conjugations in Italian! The future is nowhere near as difficult as the present or past, huh?

Verbs That Are Irregular in the Italian Simple Future Tense

Hold tight for a moment, though—as usual, there are a few irregularities. But even these aren’t so bad when dealing with the future tense. And you will notice that the tail end of the endings (from the r onwards) is the same for each subject even with these irregular future tense conjugations.

In fact, many verbs are irregular simply for the fact that they eliminate the vowel before that r in the ending. Otherwise they add the same future endings for each subject that we have already seen. For example, here’s how the future tense is formed for these very common verbs:

If you have studied the present continuous or other such tenses you know that Italian contracted infinitives tend to get shortened and mangled a bit, and the same happens with these verbs here. Often this means a double r, which should be heavily pronounced. Otherwise the endings remain the same across all subjects.

Finally, let’s look at the cranky oddball that is essere (to be), and its conjugations:

tu sarai — you (singular, informal) will be

noi sarà — we will be

voi sarete — you (plural) will be

loro saranno — they will be

These are the main irregular verbs that most learners will need to worry about—the future simple tense is mostly pretty regular. And for particularities of irregular Italian verb conjugations, WordReference has an excellent conjugator.

Here are a variety of examples with different regular and irregular verbs and in different contexts, with the future simple tense in bold.

Farà freddo. Indosseremo delle felpe. (It is going to be cold. We are going to wear sweatshirts.)

Loro dormiranno tutto il pomeriggio. (They are going to sleep all afternoon.)

Sono sicurissimo che sarà un viaggio divertente. (I am extremely sure that it will be a fun trip.)

Domani vedrai che sono goffo quando ballo. (Tomorrow you will see that I am clumsy when I dance.)

Sarà il suo compleanno. (It will be her birthday.)

Note that unlike the following example in English (and in many other Romance languages, interestingly), both parts of a good Italian future sentence can be in the future tense:

Rifiuterò il formaggio quando saró a Napoli. (I will turn down cheese when I am in Naples.)

Fino a venerdì mattina non sapremo con certezza se potremo volare. (Until Friday morning we won’t know for sure if we can fly.)

The future tense is also often used to talk about speculation. For example, as is perhaps becoming obvious from certain examples, I’ve got a future trip to Naples on my mind to visit my darling, wayward Raffaella. And if I actually get there, and she is nowhere to be found, I can still keep using the future tense but now with a speculative (non-future) meaning:

Dove sarà? (Where could she be?)

I’m wondering in this case where the heck she is right now, not asking where she will be at some point in the future.

If I’m unrealistic, I can ask myself if she has been unjustly detained:

Forse sarà alla stazione di polizia. (Perhaps she is at the police station.)

And if I’m smarter I can speculate:

Finally, the future tense in Italian can also be used to boss people around.

As usual, it is best to study this tense and its uses just within the context of speaking Italian and think only about what the tense enables you to do in the Italian world. You don’t want to look for a correspondence with any particular tense or structure in English.

In English we do all kinds of other, non-futuristic and strange things with the word “will,” for example, “people will always comply if given direct orders.” And to make matters worse, we also have many other ways to suggest the future. (“On Friday I go to Naples.”) So:

The other future tense to worry about in Italian is the future perfect. It is not difficult to form if you have studied the past tense (remember me scolding you to do that first at the beginning of this article?).

Here is an example with avere as a helper:

io avrò parlato — I will have spoken

tu avrai parlato — you (singular, informal) will have spoken

noi avremo parlato — we will have spoken

voi avrete parlato — you (plural) will have spoken

loro avranno parlato — they will have spoken

And here is an example with essere:

io sarò andato / andata — I will have gone

tu sarai andato / andata — you (singular, informal) will have gone

noi sarà andati / andate — we will have gone

voi sarete andati / andate — you (plural) will have gone

loro saranno andati / andate — they will have gone

You will notice that the past participle (e.g., andato/a/i/e) is modified just as it would be in the passato prossimo.

The Italian future perfect is used to talk about what will have happened at a point in the future.

For example, if I’m stuck in dreary Germany this week, but have a Friday overnight train ticket for Naples, I can wax dreamily about my weekend:

Il sabato mattina sarò già arrivato a Napoli. (On Saturday morning I will have already arrived in Naples.)

This is pretty straightforward, but the tense is also used in ways that might seem a bit stranger to English speakers. It can be used, for example, to speculate about past things:

Note that there is no intent to talk about the future in that case. The way to say this in Italian without the future perfect is: Forse ha cambiato idea.

Similarly I could use it to speculate about my deluded or dense Neapolitan darling who somehow manages to misunderstand my perfect Italian WhatsApp missives about where and when to meet:

While the future perfect tense is part of standard Italian, I mentioned earlier that it is a bit esoteric, and that is because most Italians tend to use other workarounds to avoid using it, especially in conversation. One such common alternative is dopo + past infinitive:

Ti chiamerò dopo aver verificato che ci sono posti. (I will call you once I have verified that there are two seats available.) 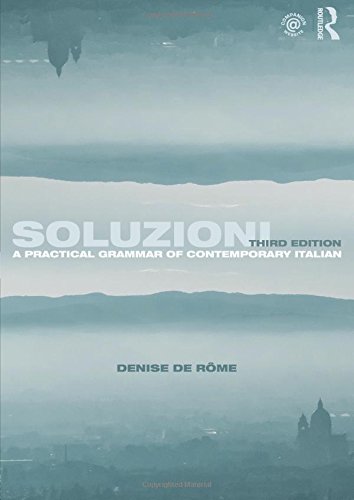 Looking to read more about the future tenses? There is a great chapter in the textbook “Soluzioni“ by Denise de Rome. And if you want to test your conjugation abilities, try this test of the future simple tense and this of the future perfect.

Don’t forget to listen to how native speakers use the future tenses, though. How? Watch a good Italian movie or two. Find a language exchange partner. You could also use a virtual immersion platform. FluentU, for example, has a large library of videos from Italian pop culture, along with interactive subtitles and review quizzes.

And then, of course, you can practice writing and speaking about your own future—and what better future is there to talk about than one where you’re in Italy?

Talking about future Italian adventures (whether truly planned or conjured from the ether for the purpose of practice) will put you in the frame of mind to use the constructions and vocabulary that you will also actually make use of when you’re there, and it’s a great way to make studying a verb tense a lot more fun.