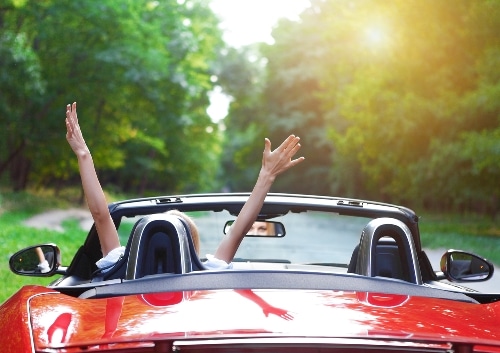 4 Brilliantly Fun Ways to Learn French on the Go

We spend around one year of our lives commuting.

Whether you are driving or bobsledding, that is a sizeable amount of time when you consider we designate a lousy 14 days a year to smooching… French or otherwise.

You might be rolling in more novels, podcasts and music than a francophile on Bastille Day, but finding the time to integrate French into your everyday life can prove more difficult than finding a seat in rush hour.

Just because we dedicate 365 undesirable days to transit in a lifetime, doesn’t mean we have to waste them harvesting crops on “farmville.”

How Much Time Do We Spend Commuting?

If we were to break it down into realistic measurements, the average Western person spends just under an hour a day making it to and from work—with many traveling further.

Comparing the general and recommended study hours often suggested to college students, the average weekly time provided by your inbound and outbound journey leaves you in pretty good stead for mastering French.

Typically speaking, an extra two hours per week is advised to undergraduates for their respective subjects in order to do well. Assuming you work five days a week, with that logic, you could invite another language (and a half!) to your linguistic party… although let’s not get ahead of ourselves!

Why Learn French on the Go?

An obvious perk of commuter-based studying is the opportunity for time. No need to make such a commodity when you are forcibly confined for around 20 minutes a trip—could we call it an occupational dividend?

Here are some of the more probing effects of learning on the go:

Now that you have a regular study schedule imposed upon you most mornings and evenings, you have the luxury of reviewing effectively. Experts suggest learning things when you are most alert (morning, afternoon or evening), and for most people this occurs in the morning, a time which also coincides with many commuters.

Using this train of thought, you can create a simple yet effective study plan by learning new material on the incoming journey and reviewing it on the outgoing. This daily combination is sure to have you learning and memorizing faster and more comprehensively.

Having the security of foresight is also advantageous in progressing with French. Knowing for the next five mornings you will be covering new and specific topics gives you an idea of where you will be with your language learning across a time frame and how to accommodate this evolution through resources and techniques.

Frequent study is all well and good, but when you are hitting the books at the rate commuting offers, the prospect of sitting on the same chair in the same room, day in and day out, can call for language mutiny through monotony. There’s no point in learning if you resent the space, or worse, develop a nasty case of cabin fever. Although you may take the same bus every day, the people, situations and journey are more volatile, giving you a sometimes welcomed change of pace.

Beyond alleviating stagnant study habits, by traveling a route you know well for an extended period of time, you can employ a location-based method of studying—which has been commended by students and experts alike in boosting memory retention. This would be particularly effective in learning vocabulary and will be discussed in further detail later on.

Correlations Between Movement and Learning

For many years now it has become more accepted that there is a distinct and positive association between comprehension and movement. Anatomically, the part of the brain that processes movement, the cerebellum, is the same part that processes learning. Physical activity boosts blood flow and oxygen to the brain which promotes cerebral activity and recent data has shown that certain learning functions increase whilst a person is in motion.

This method might not paint the stereotypical nerd in their usual light, but it has made its way into the actors’ toolbox for memorizing lines, after research found subjects were more likely to both read faster and remember more if they were moving (walking, swaying etc.). Similar research concluded that memory retention was significantly higher if a person was moving while using study cards.

If you bike or walk to work, this information is invaluable. Naturally you would need to adapt your method to safely fit your mode of transportation, but even if you were driving or catching public transportation, an element of movement is involved and the principal remains the same.

Although not as fundamental to language learning, current surveys are suggesting that your daily commute is detrimental to your health in more ways than one. A key player in this is the stress factor. Being sardined on a train or stuck in hectic traffic is enough to raise anyone’s discomfort, particularly if you’re worrying about being late to work. Research has shown that those who stress during their commute will have a generally reduced performance at work than those who remain chill.

Distracting yourself with creative pursuits—or more topically your language endeavors—is likely to keep the anxiety at bay and the conscientious work at play.

How to Learn French on the Go: 4 Fresh Suggestions

Apart from the usual ol’ faithfuls (TV, flashcards, apps, games etc.) give some of these fresh ideas a whirl when you are next killing time on your commute.

1. Create Your Own Recordings

Not only is this accessible for any particular mode of transportation, but constructing your own recordings provides for a double platform to review and the opportunities to create are numerous. You could go basic and have current vocabulary spoken back to you, or you could create an entire dialogue for conversation in which you respond to the recording.

By initially registering the vocabulary into the device, you are in some way reviewing, and when you plug in on the train, in your car or on your walk, you have the more flexible option of reviewing. Make sure to leave time for yourself to make a verbal, internal or written response after the material is read. For basic vocabulary practice, try including your native language after your response to clarify your answer.

If you don’t feel up to constructing your own dialogues to begin with, check out these examples for some basic ideas. Most smartphones have a suitable function to make this method a hit.

This strategy is great for listening and speaking skills, but could also include some written and reading tasks as well—the world’s your voice recorder with this one!

2. Get Down and Dirty with Some Rap

America has always reigned OG (original gangsta) status when it comes to the birth of hiphop and rap, however, it may interest you to know that France was a close second back in the ’80s, and their interest in the game didn’t stop there.

Listening to rap in French as a learning device is a super dope idea. Just like you have to train your muscles to move without thinking when learning a musical instrument, the same goes for your mouth when mastering a foreign tongue. Rap can be more effective than other music genres because it exposes a language’s natural rhythm and sound more blatantly, which can prove most difficult for a beginner to grasp in conversation.

On paper you might be able to comprehend until your heart’s content, but when faced with a native speaker slurring out even the most basic of phrases you find it confusing to distinguish between content and sounds. This is normal, because we don’t naturally speak syllable by syllable, so often the written word is expressed quite differently in a sentence than on its own.

By learning French through rap you adopt a sense for the movement of the language. By mimicking songs perfectly, your own sound production can switch to autopilot, leaving more opportunity to concentrate on your content. That is why we suggest both learning rap songs by heart and imitating the singer to the best of your ability. This will have you sounding more français (French) every day—and you won’t even have to think about it.

Another clever strategy for creative crews is busting your own French rhyme. Take to the trains with a pen and paper like a true underdog, or work up the skills to freestyle on your walk. The benefits are numerous, and does wonders for your French sound input and output. Find the charisma in your commute, whichever way you do it, and comment on it like a true cinquante (50) cent.

Check these guys out for some impromptu inspiration, and if you’re interested in hitting up some sick French rappers, become acquainted with these household noms (names):

3. Tell a Story About Your Journey

Either written, spoken or internally, construct a story that relies on aspects of your trip, but that’s also topical to your learning material. This is a cool activity, as it encourages natural sentence making, but also draws on the location-based method of study mentioned earlier. By creating a story you are enabling other factors to support your memory retention.

For example, if you were learning the adjective, marrant (funny), and a man with a hilarious wig went by, you could link the situation to the word and have a greater chance of recalling the information in the future—thanks to the multiple contexts you’re creating. The more descriptively you connect your vocabulary to the physical world around you, the better you will be at recalling the words later.

If you struggle to describe a situation how you’d like to in French, jot it down in your native language and work on translating it sometime during the day. Then, on your return trip (or the next morning), you can review it!

If you are lucky enough to have a French speaker inhabiting your neck of the woods with a similar schedule to yours, what better way to kick off your day than by arranging a commute time talk? Whether you are in public or holed up in your car, you can adapt the technology to suit you—think loud speaker function or trusty earphones.

Other options to call francophiles include Viber, Whatsapp, Skype and other applications that allow you to make international calls for super cheap or super free.

Sometimes the worst thing about a tandem is feeling like you are on a bad date, as the words run out of steam and the awkward nodding and sighs set in. As with creating a story during transit, you won’t be dry on subject matter while chatting and commuting. The world is right in front of your eyes, cringing through another 25-minute travel for the daily grind.

To get the most out of your rush hour ramble, have a way of recording the parts of the conversation that stick in your mind—whether they be for interesting or confusing reasons. Documenting such moments in your notebook or capturing them on your phone are both effective ways of doing this— depending on your mode of commute, of course.

Whichever way you decide to use your time on the go, make sure it meshes well with your mode of transport, interests and learning capacity. It is true what they say though, if you don’t use it, you lose it—and no one wants to make up for lost time!