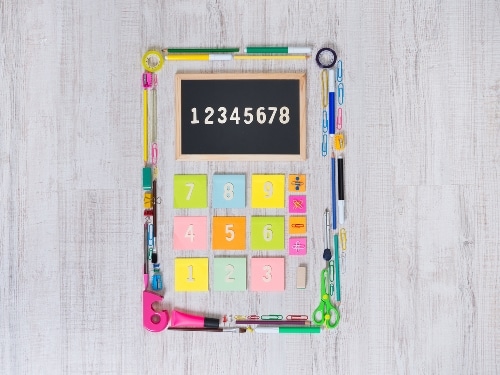 It’s time to mix and mingle.

We’re letting French out on the loose to connect with other subjects.

How will these connections benefit your students?

To make French more relevant to your students, all you need are numbers.

And to make these numbers fun, you’ve gotta use games.

Why Teach French Numbers with Games?

There are a number of very important reasons to teach numbers with games in French. French number games are useful because they:

Reinforce the importance and place of French in the mainstream curriculum.

Too often we teach French in isolation from other school subjects—we teach math, history, art, geography etc., …and French. All the other subjects have the common connecting thread of English running through them. English provides a sense of ease and comfort for the students, so the difficulty of understanding the teacher’s words or the texts is largely absent.

On the other hand, students sometimes perceive understanding even the basic instructions in the French classroom as an enormous challenge. This absence of a connection with their other subjects can send the signal that French is not as important as their other subjects. Math can provide that missing connection.

Including math, which the students are already familiar with, gives your students a sense of familiarity—a knowledge base on which they can build. Your students will feel a sense of connection between the digits they recognize in English and the new French words that are associated with those digits. That link allows students to see that French is relevant to them.

Provide a link to prior knowledge.

Math is something familiar to your students, but doing math in French adds some extra spice and fun. Students may not understand the French instruction you have just given them, but they can read the digits on the board. The numbers serve as a prior knowledge base, and the difficulty of reading, listening to and speaking in French adds enough challenge without being too scary for the students.

The unfamiliarity of French serves as an equalizer in the classroom. Those students who find math difficult and feel very self-conscious about it may find that their superior skills in French allow them to compete with the better mathematicians in the class. This can be a great confidence booster, and the benefits of this increased confidence will extend beyond the French classroom into their other classes.

The games below require little to no preparation, and aren’t complex. That means they’re perfect for those times when your class has finished their work, and you’ve only got five to ten minutes left of class.

Your students are going to love playing these games. What more can be said? Let’s get to the games:

This fun and challenging game allows students to practice numbers as well as simple arithmetical operations such as plus (plus), moins (minus), multiplié par (multiplied by), divisé par (divided by) and égale (equals) in French.

Divide the class into teams of two students. Students get to practice speaking, listening and thinking in French.

This simple but effective game is a great time-filler that requires no preparation on your part, other than making or purchasing a set of bingo numbers for the caller to use. The caller is practicing speaking French while the other students hone their listening skills.

Here’s how to play:

This great code-breaking game tests student recall of numbers, the French alphabet and French words as well. This game requires the most preparation of the five, but it’s well worth it. Once you have made up codes for all your teaching units, you can reuse them year after year.

If your class were doing a unit on “Chez moi,” your list of prepared words might include the following:

This is a sometimes-riotous game for the last 10 minutes of class. You can sit back and just enjoy watching the students having some fun while they practice reading and speaking in French.

To play the game:

There are many benefits of adding math and number games to your French classroom. Teaching math in French reinforces the idea that French is a normal part of the curriculum and not just an optional add-on.

Math in the French classroom gives students some familiar ground to work with, and allows them to gain confidence in this new and unfamiliar language. These French math games encourage reading, speaking, listening and even thinking in French.

Making the most of these French number games will really add up to some effective learning for your students.

Bevan C has been a teacher of French, a traveler and explorer. He is now a writer and editor. You can find out more at: https://www.elance.com/s/writeintention/

Looking for more ways to keep your students engaged and entertained?

With FluentU, you can make every aspect of learning French (even homework!) just as fun, challenging and addictive as playing a game.

FluentU lets your students learn French from real-world content like music videos, commercials, news broadcasts, cartoons and inspiring talks. Since this video content is stuff that native French speakers actually watch on the regular, your students will get the opportunity to learn real French—the way it’s spoken in modern life.

There are tons of great choices here when you’re looking for material for in-class activities or homework. Plus, all the videos are sorted by skill level and are carefully annotated for students:

FluentU brings authentic French videos within reach of any learner. Interactive captions will guide your students along the way, so they’ll never miss a word.

Your students can tap on any word to see a definition, in-context usage examples, audio pronunciation, helpful images and more. For example, if they tap on the word “suit,” then this is what appears on the screen:

That’s not all, though. Students can use FluentU’s learn mode to actively practice all the vocabulary in any video with vocabulary lists, flashcards, quizzes and fun activities like “fill in the blank.”

What’s more, FluentU keeps track of all the grammar and vocabulary that each student has been learning. It uses viewed videos and mastered language lessons to recommend more useful videos and give students a 100% personalized experience.

With a FluentU teacher account, you’ll get access to a ton of cool features. Aside from being able to incorporate the videos into your regular classroom activities, you can assign your students videos for homework and track their progress individually.