Same but Different: 50 Italian Synonyms to Round Out Your Vocabulary

The great Italian philosopher and poet Leopardi had deep thoughts when he gazed at the moon.

Notice, though, that he didn’t actually describe it.

Maybe he just couldn’t settle on the right words.

There are so many choices when it comes to describing things—even for something as well-known and admired as the moon.

The good news is that a language superstar, the synonym, gives us the ability to say the same thing in many different ways until you find exactly the perfect word.

We can describe the full moon as round by using rotondo, tondo, completo or intero. They all work!

Synonyms add dimension to your Italian, fatten up your vocabulary—and round out that moon.

Why Is Learning Italian Synonyms Important?

So let’s get right down to the nitty-gritty. What, exactly, are synonyms?

Synonyms are words that have the same, or almost the same definition. If you substitute a word in a sentence with its synonym, the meaning of the sentence won’t change.

Although the general meaning remains the same, sometimes there are subtle nuances in a word’s meaning which can slightly change the tone of the sentence.

Think, for example, of the difference between calling someone “plump,” “chunky,” “fat” or “meaty.” Phew, those just get worse and worse! They all mean the same… but the slight difference can make or break a friendship (really, we can’t think of any situation where it’s okay to call someone “meaty”).

Learning words in groups is a good idea to help you remember them, and grouping words with similar definitions helps find a common thread between them.

One study actually found that learning synonyms together helps learners recall them better—though a previous study disproved that very same thing, so make of that what you will.

Either way, we recommend that you wait until you’re no longer a beginner, so you aren’t learning all new words, but rather new ways of saying things you already have vocabulary for.

How to Learn Italian Synonyms

If the list below has you hungry (or starving or famished) for more synonyms, here are some suggestions for how to learn them: 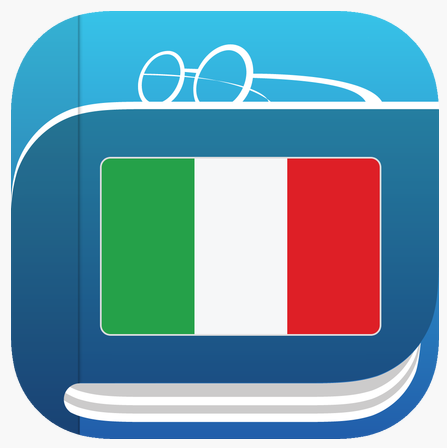 Grab a thesaurus to find similar word groups. Look up any common word to find a more intriguing one!

The Italian Thesaurus and Dictionary app is available for iPhone and Android users. Now you’ll never be at a loss to describe something—in multiple ways—in Italian!

With a ton of descriptive words at your disposal, your speaking and writing skills will be tremendously improved!

50 Italian Synonyms to Round Out Your Vocabulary

sottovoce, piano (in a low voice)

Both words mean “to speak quietly” but sometimes sottovoce can also indicate that a person is whispering. (The actual word for whispering is sussurro.)

Often, when we say that something or someone is moving at a fast pace, we choose the word rapidamente (quickly, fast) but here are two other ways to say a person or thing is zooming by.

Additionally, you can use fretta to encourage someone to move quickly.

For instance, if you spot the bus coming down the street when your companion is browsing the shop windows in the distance, it’s okay to call, “Fretta!” (“Hurry!”)

Most of the time, forte is used to describe someone who’s strong.

But forte can also mean “loud”! (If you’re a musician, you probably already know this.)

Molto and tanto both convey quantity. Sometimes tanto goes beyond “much” to mean “too much” but the difference is subtle.

Uguale refers to the identical nature of things. That is, it often shows that people or places haven’t changed, that they’re alike in the sense that they remain the same as they once were.

Disuguale can be used to point out that time can change people or places and that they aren’t what they used to be!

Vecchio can be used to reference age so it’s possible to exchange it for the synonym anziano. They both reference age although vecchio is used more often than anziano.

Vecchio and antico both mean “old” and refer to objects. For instance:

There’s a level of extended age that’s implied by using antico although both words can be used to state that an item is just very old.

Adipose has made its way into English textbooks as “adipose tissue,” a.k.a, fat. No surprises there.

Both magro and sottile mean “thin.”

Use magro to refer to people and sottile to reference items.

Italian is the language of love; is it any surprise that there are so many synonyms for the word “nice”?

Simpatico and carino are both used to refer to something nice or pleasant. They show that someone or something is pleasing to the senses.

Buono also means “nice” but it additionally indicates that something is good or okay.

Povero and misero can be used to indicate someone who’s really down on their luck or in an unfortunate situation.

Italians love buona fortuna! (good luck!) so it’s not shocking to see that they use more than one word to express good fortune.

A cultural side note: In bocca al lupo (literally: in the mouth of the wolf) is a common term to wish someone good luck!

Sometimes, prossimo is used to mean “next,” but both vicino and prossimo indicate location.

Even using prossimo to say “next” shows that whoever’s next is very near the beginning of the line!

Both più tardi and dopo suggest that something will occur later.

Dopo and prossimo share that unique Italian usage of inferring that someone or something is next in line to do something.

Synonyms open up so many options and enhance communication skills. They’re invaluable for adding flair to writing and depth to conversations.

So use synonyms to grow your vocabulary—and reach for the Italian moon!