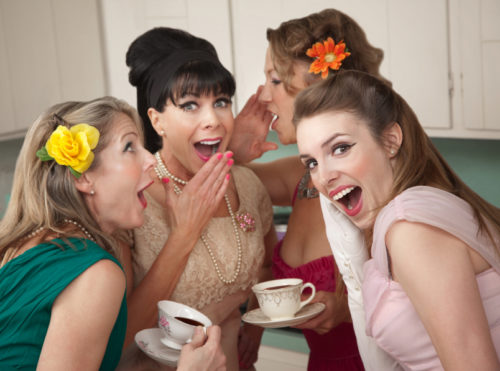 Know Adverbs in English? Then You Can Master Italian Adverbs Today

Kick up the drama. Add some flair. Get people interested.

Use adverbs to tell people how it happened.

Adverbs let you explain how frantically the bicycle thief fled the scene. Or how ardently the the postal worker loved the barmaid.

With adverbs, you can describe all sorts of dramatic things.

Today, we’ll help you do it in Italian, too!

In this article, you’ll learn how to form Italian sentences with adverbs, three main types of adverbs with key vocabulary and where you can practice putting your new skills to use.

Of course, there are some exceptions, but they’re easy to learn and we’ll discuss them in depth throughout this article.

Essential Italian Adverbs and How to Use ‘Em Correctly

Rules for Using Adverbs in an Italian Sentence

As a general rule, adverbs directly follow the verb they’re modifying. Take a look at this example in the tempo presente (present tense):

In the passato prossimo (a super-common Italian past tense), the adverb directly follows the past participle:

Now that we have those basic word order rules down, let’s incorporate more grammatical building blocks.

When There’s an Object

If there’s an object in the sentence, the adverb still follows the verb or past participle:

In the context of a question, the adverb can go at the beginning or the end of a sentence.

Tu ti trucchi ancora? — Are you still putting on your makeup?

Here, ancora (still) is the adverb.

When using an interrogative adverb (a.k.a. “question words”—more on those later) you place the adverb at the beginning of the sentence.

Quando andiamo al teatro? — When are we going to the theater?

Here, the interrogative adverb quando (when) is at the beginning of the sentence.

The word order changes slightly when the sentence starts with c’è or ci sono (there is/there are).

In this case, the word order is: subject + object + adverb + rest of the sentence.

Ci sono coniglietti  fuori! — There are bunnies outside!

In pretty much every instance, a simple adverb (full list of these below) will be used in conjunction with c’é or ci sono.

Another exception to the usual word order is the adverb già (already). Gia goes before the verb.

Ma mamma, ho già fatto i compiti! — But mom, I already did my homework!

Hai già lavato i piatti? — Did you already wash the dishes?

3 Types of Italian Adverbs with Examples

1. Adverbs That Come from Adjectives

For example, if you wanted to turn lento (slow) into an adverb, you would take the feminine form of lento, which is lenta, and add -mente to get lentamente.

Here’s lento used as an adjective:

Il servizio in questo ristorante è lento. — The service in this restaurant is slow.

Now let’s turn it into an adverb:

Here, lentamente is an adverb that modifies the verb cammina (walks).

We already saw an example of an adjective ending in -e turned into an adverb—felice (happy) becomes felicemente (happily).

Simply put, simple adverbs are adverbs that aren’t formed from adjectives. You just have to memorize what they are.

For beginners, these little words may be hard to remember. Often it seems like you can understand a sentence without them. But they’re actually info-packed, and being able to use them will improve your Italian immensely.

Below are some examples of Italian simple adverbs, with sample sentences to show you how they’re used. This time we’ll throw in some examples in the present continuous tense, as indicated with an asterisk.

Vengo da te attorno le nove.— I will be at your place around nine.

Bene is one of the most commonly used adverbs in Italian. You use it to say that someone is doing something well.

Il corpo del santo è dentro il cattedrale. — The saint’s body is inside the cathedral. (You’ll see this a lot in Italy!)

Prendiamo una birra dopo la partita. — We’re getting a beer after the game.

Stai attento! Ci sono vampiri oltre i muri del castello! — Watch out! There are vampires beyond the castle walls!

Loro sono sempre insieme — They are always together.

In the examples below, notice how the interrogative adverb appears at the beginning of the sentence in both the present and past tense, as well as in a negative question.

Quando mangiamo la cena? – When are we eating dinner?

Where to Practice Using Italian Adverbs

If you would like to put that dramatic adverb knowledge to the test, here’s a list of online quizzes that you can take. 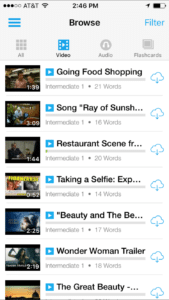 FluentU helps you get comfortable with everyday Italian by combining all the benefits of complete immersion and native-level conversations with interactive subtitles.

Tap on any word to instantly see an image, in-context definition, example sentences and other videos in which the word is used. 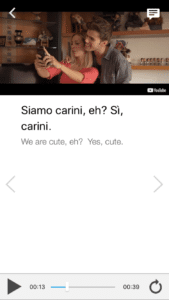 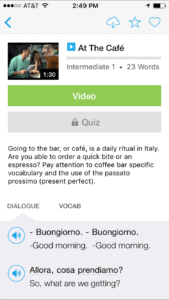 Once you’ve watched a video, you can use FluentU’s quizzes to actively practice all the vocabulary in that video. Swipe left or right to see more examples of the word you’re on. 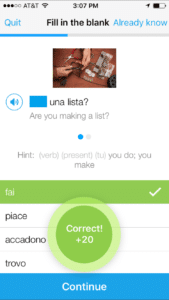 FluentU will even keep track of all the Italian words you’ve learned to recommend videos and ask you questions based on what you already know.

Plus, it’ll tell you exactly when it’s time for review. Now that’s a 100% personalized experience!

The best part? You can try FluentU for free with a 15-day trial.

Start using Fluent on the website, or better yet, download the app from the iTunes or Google Play store for iOS and Android devices.

After mastering adverbs, you’ll become a master storyteller in Italian. You’ll be able to provide important details about how things occurred.

You’ll also be more aware that those little words like già aren’t just random words you have to memorize. They’re actually adverbs. This gives you more context about how these words add meaning to a sentence.

With a little practice, you’ll also see that adverbs are quite easy to learn and by correctly using them, your spoken and written Italian will sound much more fluent.

Jesica Versichele is a writer in the art and culture niche. As an American expat who lives in the Netherlands, she writes about travel and cultural experiences in Europe for an American audience. Check out her website JV Creative Content.


If you liked this post, something tells me that you'll love FluentU, the best way to learn Italian with real-world videos.

Summer in the (Italian) City: 5 Incredible Summer Courses You Can Take Throughout Italy
6 Interactive Ways to Learn Italian for Beginners Online in Your Free Time