Numbers make the world go round.

That’s why counting is one of the first things we learn in any language.

It doesn’t matter whether it’s our first, second, fourth or tenth language.

Numbers are always necessary to learn as building blocks.

Knowing how to count, and just knowing the names of numbers in general, is of paramount importance to language acquisition.

Teacher, Why Do We Need to Learn Spanish Numbers?

That’s good — they should be curious.

None of us likes to waste time learning things we don’t expect to ever use.

So, when they start to question or protest, give them the following reasons why knowing Spanish numbers will serve them well.

It’s important for your career.

Many of your students will likely obtain jobs in the business world, a world in which math skills are necessary on a daily basis. Whether they end up working as accountants, investors, retail salespeople or supermarket clerks, numbers will be a part of their daily work lives.

Spanish is becoming a more and more important language in many industries, so a good grasp of both math and Spanish with take them far.

If your students ever plan to live abroad or even simply travel to a Spanish-speaking country, they’ll need to know how to say numbers.

They’ll need to use numbers when ordering at restaurants, checking out a museum’s hours of operation, buying stuff at the store or writing down the phone number of the hot foreigner they want to take on a date.

To provide some perspective, ask your students to think of all the instances when they use numbers in their daily lives and make a list. Doing so should help them realize how often they need digits every day.

In this blog, you’ll find some games and other lesson ideas to make learning numbers in Spanish as painless as possible for your students. 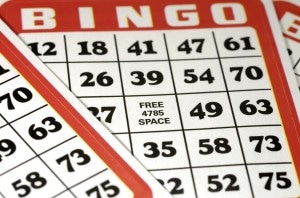 No, not the farmer’s dog, Bingo, but rather the game often thought of as the hobby of the elderly.

This game is useful in more ways than one, as it also tests your students’ Spanish listening abilities. Your students may be able to recite the numbers 1 through 10 in Spanish on cue, but that doesn’t meant that they can immediately point to 43 when they hear cuarenta y tres.

To play Bingo, first print out scorecards. These will look like empty, square grids of varying dimensions and can be made in a word processor or found online via a search engine. The typical bingo grid is 5 squares by 5 squares.

Bigger grids (for example, 8 squares by 8 squares) will make this more challenging for more advanced students.

For beginning level students, use a grid with smaller dimensions (like 3 squares by 3 squares).

Pass out the empty grids to your students and ask them to fill in the blank squares with numbers of their choosing, without repeating any number more than once. Give them a maximum value to use, if necessary, so the game is not too challenging.

You can play another version where the students write out the Spanish numbers with letters instead of numerals. This will allow you to check their spelling and use of accent marks.

Once a student says they have Bingo, it’s time to put him or her in the dreaded spotlight. Ask the student to read out the numbers he or she crossed out in Spanish and ensure they match up with the numbers you read. Doing so will prevent your students from randomly crossing out numbers to get a Bingo.

To add an incentive for your students to learn, you can provide prizes for them. They can be little prizes like stickers or other items you can find at the dollar store.

A little physical activity while simultaneously learning Spanish will benefit all of your students, especially the kinetic learners in your class.

To play, have your students stand in a circle. Then, give one student a ball and ask them to say their number. That student then tosses the ball to another student who must say the next number. Do this activity counting up to the number of students in the circle and then go backwards.

Alternatively, they can keep on going until they reach a breaking point where they don’t know more numbers — or they could go to another designated number limit.

It also works for older and slightly more advanced students if you have them start counting at a higher value, like 100 or 1000.

This activity is great as a warm-up for class or as a break when students are getting restless mid-lesson. I recommend exposing your kiddos to a nice dose of vitamin D if the weather is nice by bringing them outside for this activity. 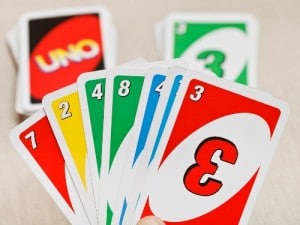 Uno is a classic and beloved card game around the world. It can provide oodles of fun for families and friends or, on the flip-side, hours of arguing over what kind of rules to use. Can you play a “Skip” on another “Skip?” Is it fair to play a “Draw Two” on a “Draw Four?” Can a player who was just hit with a dreaded “Draw Four” still play a turn?

Whether you see it as family fun or a fight initiator, Uno has put the Spanish word for “one” in the vocabularies of people everywhere.

Uno is useful for teaching far more than the number one, as long as you tweak the rules a little bit. Have the students say the number of each card they play in Spanish. This can also be used to teach or practice color words simultaneously.

To play in class, bring in several decks of Uno cards. Split your students into groups of up to six students. The group size will depend on the number of Uno decks at your disposal. You can use traditional Uno decks or one of the many themed decks available in stores today.

Have the students play the game saying each number that they place on the deck out loud. Once one student is out of cards, have the students add up the numbers on all of their remaining cards and take turns reading their totals. For example, yo tengo quince puntos. 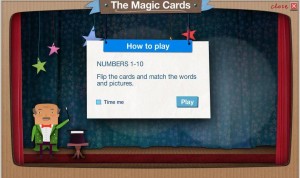 You may understandably feel a bit skeptical about my next suggestion, to have your students play games online.

But when have I ever led you astray?

Hopefully never. Trust me, as someone who has worked as both a nanny and a teacher for many years, I know that if a kid is interested in the subject they’re learning — or at least the way in which they’re learning it — they’re much more likely to absorb new information.

You can use internet games in class via a trip to a computer lab if you have access to one at school. Alternatively, you can assign some game time to your students as homework. For the latter option, ask your students to play Spanish number games at home for a designated period of time and have a parent sign a document in acknowledgement.

A quick internet search for “Spanish number games” will result in tons of fun games for your students to play at home, or for you to play together as a class.

One great site offering fun Spanish number games is Rock A Lingua, which allows your students to choose levels based on difficulty. That makes it perfect for classes of varying ability levels. The BBC also has a useful site with games for learning Spanish numbers.

For lower-level Spanish students, try the site Digital Dialects. This one also offers games relating to other simple Spanish vocabulary.

Some of these sites even allow teachers to sign up for a class account where students can compete with each other online for top scores. Nothing drives learning like some good ol’ fashioned competition, right?

Information, especially language skills, can fade fast unless it is utilized frequently. Therefore, try to have your students practice numbers frequently. One way to do so is to simply kick off class by asking your students to say the date in Spanish or to ask similar simple questions for which the answers are numbers. So, what are you waiting for? Get counting!