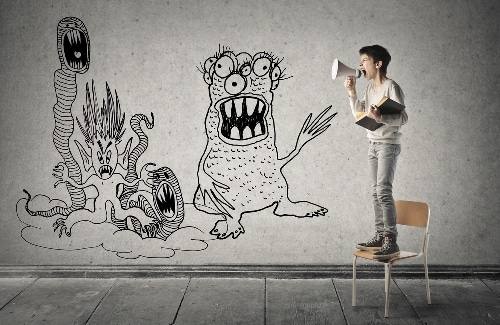 The passé composé is the bogeyman of intermediate French.

Students often fear learning it—so you’ve got to help them be brave and rise up!

As the teacher, it’s your duty to arm them with the weapons they need to conquer their fear of this somewhat complicated French topic.

Overcoming this hurdle is often acknowledged as the rite of passage where students leave the world of fun and games and enter into the realm of Serious Grammar.

Yes, there is some unavoidable rote learning, and yes, some unavoidable memorizing, but if you spoon a little sugar into that medicine, it won’t be so hard to swallow after all. In fact, I have found that once in the thick of it, students appreciate getting into the “serious” side of French. Learning more of the concrete rules opens up a world for them previously unknown. Most language centers agree.

So, how do you make exercises more interesting?

If you are unfamiliar with students’ different learning styles, check out this article to gain a better understanding. The best way to handle these differences is to come armed with an arsenal of different mnemonics for all kinds of learners.

You may have heard of this mnemonic, or you may even be teaching it already. After all, it is a classic.

Essentially, this mnemonic is an ordered list of a majority of the participes passés (past participles) that are conjugated with the auxiliaire (auxiliary) être instead of avoir.

Many students find this device helpful when being tested, though it is not my favorite tool for teaching the auxiliary être, as I find it encourages rote memorization rather than integrative learning when taken all by itself.

The reason I have included it here is that I have found it useful to teach as a first step in familiarizing learners with the verbs in question. It is also true that, for some students, this mnemonic device may be everything they need.

A good way to test whether this is a method you would use or not is to attempt to fill out the list yourself. Are you forgetting some verbs? Is there another method you use to jog your memory?

Once you’ve introduced this concept, it is a good idea to apply the Dr. & Mrs. Vandertrampp mnemonic to learning the past participle forms of the verb, instead of the infinitive.

If you’re looking for ways to make this list more exciting, try to make filling it out a competitive class exercise. Divide your students into two teams and have two different lists going on the board. Whatever team finishes the list fully and correctly first wins. Try to warn them ahead of time so they can do their due diligence and study beforehand.

2. The House of Être

In this teaching method, the house of être is made literal in the visualization of the structure and the ways in which one can interact with(in) the structure. Here is an example house.

This happens to be my favorite method of teaching être as an auxiliary verb because it provides students with a concrete visualization and understanding of when être should be used, rather than having them simply memorize a mnemonic.

In addition, in my experience, it usually means a faster recall rate for students. After familiarizing your students with the house of être, have students fill out their own house either on a sheet of paper or at the board.

Songs can be extremely helpful devices when it comes to memorization. Singing the Dr. and Mrs. Vandertrampp verbs can be done to the tune of either the “Heigh Ho” song from “Snow White” or to the tune of “10 Little Indians.”

I would recommend handing out lyric sheets if you want to add anything about les accords avec être (subject-verb agreement with être). It has also worked quite nicely to have students invent their own songs, or to have them set the verbs into pre-existing melodies that they are fond of.

French being the language of exceptions, there are of course many irregular verb endings in the passé composé. These exceptions can be nightmarishly frustrating for students.

To ease the pain, bring the fact that there are exceptions to the attention of your students early, so they are not just making mistakes and wondering why the past of découvrir isn’t découvri.

Simply paying this group of outliers some extra attention is usually enough to soothe the worries of even the most anxious learner. A great breakdown of the irregular verbs can be given to learners relatively painlessly.

Play your usual grammar games to practice this special group.

Here’s a nifty example of how to play hangman with your students to reinforce irregular verbs on revision days. If you are not in possession of a smartboard or do not have internet access, you can simply play it on a whiteboard or blackboard.

French writer and member of the Académie française, Erik Orsenna, has a brilliant novel entitled “La grammaire est une chanson douce” (Grammar is a sweet, soft song), which plays with grammar concepts through the eyes of a young girl named Jeanne who finds herself on an archipelago of “grammar islands.”

‘The idea is not dissimilar to “The Phantom Tollbooth,” a popular English book you might know about, which also involves some island-hopping learning adventures.

Anyway, back to the ideas from the Osenna book. On the grammar island is a “Bureau of Exceptions,” in which Orsenna anthropomorphizes several French “exception words.”

Have students read this, or read it to them. Together you can create dioramas of some of the passé composé irregulars as being part of “le bureau des exceptions.” This is one way to get them thinking visually and in an integrative way about which verbs have exceptions.

6. Search for the Passé Composé in French Culture

Connecting the grammar concepts covered in class to French culture is an incredibly important piece of learning the language.

By this point, your students should have had some practice with and previous knowledge of the passé compose. Here are a few examples of French media that can be used in class to recognize the passé composé as well as offer some extra practice.

This song is from the classic new-wave film “Jules et Jim.“ Almost all French people are familiar with it, and are very impressed if an anglophone has it in their repertoire.

First, introduce the song to students by simply having them listen to it. Next, distribute a lyrics sheet on which the verbs conjugated in passé composé are missing and have been replaced with the infinitive.

Have the students fill in the missing past tense and correct them. Keep in mind that this song is relatively challenging and should be used for higher-level students looking to really apply their skills and knowledge.

“Déjeuner du matin,” from the book “Paroles,” is by far the most popular poem for passé composé, and for good reason.

Written in simple language and entirely in past tense, Prévert manages to be very moving without ever dumbing things down.

Prévert is also part of the standard curriculum for French high school students, which can be a real boost for FLE students. It is very reaffirming to know that their French has come far enough that they are able to understand some of the same literature being read by their native French peers.

Now that your passé composé arsenal is a little bigger, you should have no problem helping your students overcome their anxieties and watching them leap into the grammar battle, fully armed!

French Kaleidoscope: 7 Classroom Activities to Get Your Students Practicing All Facets of French
4 Heart-warming Christmas Games to Spice Up Your French Class This Holiday