Undiscovered Europe: The 6 Most Beautiful Places in Eastern Europe

When we talk about Europe, most of us have the same pictures in our heads.

The Eiffel Tower in Paris. The Colosseum in Rome. Big Ben in London.

When I first moved to Europe a few years ago, I was amazed by how much breathtaking scenery I could witness just by crossing a few countries’ borders into Eastern Europe.

Now that I’ve hopped around this half of the continent, I have to say that Eastern Europe is one of my favorite areas to explore in the entire world.

Why Go to Eastern Europe?

Want to explore beautiful streets, see unique architectural styles and open your eyes to a side of the world you’ve never seen before?

Then Eastern Europe is the place to be.

The Hungarian Parliament Building in the evening. Šumava National Park in the Czech Republic. Plitviče Lakes National Park in Croatia. Between the architecture and natural scenery, Eastern Europe is unmatched in beauty.

Besides incredible places, Eastern Europe also offers unique food and interesting historical places for a fraction of the price elsewhere in the world.

And because Eastern Europe isn’t as tourism-driven as most Western European countries, locals aren’t fed up with travelers. Most of them will be friendly and welcoming.

Undiscovered Europe: The 6 Most Beautiful Places in Eastern Europe 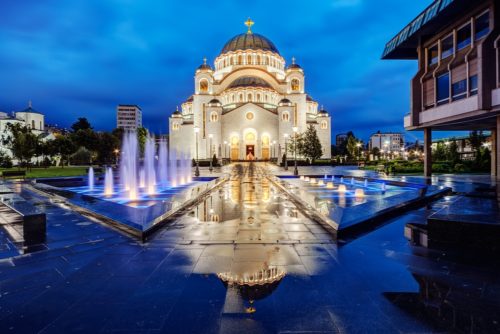 I’ve lived in more than 10 countries over the past four years. When people ask me which places have been the most incredible, Belgrade is always on the list. I’m absolutely in love with Belgrade.

The mixture the Old Town’s architecture and the young, buzzing Serbian crowd around the city is unbeatable. Belgrade Old Town (also known as Stari Grad) is full of character and interesting sites to visit. If you’re curious about the history of the former Yugoslavia, Belgrade definitely needs to be on your travel bucket list.

While you’re there, don’t forget to take a whole day to explore the gorgeous Kalemegdan Park inside the Belgrade Fortress! You can see the Sava and Danube Rivers connecting, a sight that’s even more magnificent if you wake up early and watch the sun rise over the water.

If you like the cold, Belgrade is the perfect destination all year. There isn’t usually much snow, so the city is still walkable in winter.

If you prefer to explore the outdoors and dine al fresco, plan your trip to Belgrade in the spring. 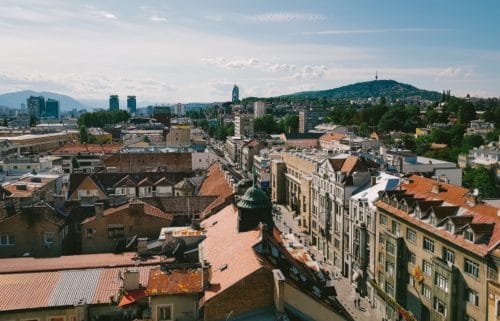 Just a couple decades ago, it would have been impossible to recommend Sarajevo to travelers. In the 1990s, the siege of Sarajevo took place. It lasted nearly four years, making it the longest siege that ever happened in a capital city.

However, Sarajevo rose from the ashes.

Today you can walk around the authentic streets of Sarajevo and take in the city’s different eras showcased in just a few blocks. Architecture is one of the most surprising things you’ll see in Sarajevo because the buildings show you everything this city has gone through—and that’s a lot!

Make sure to watch the sun go down at the Yellow Fortress, right at the entrance of Sarajevo’s Walled City of Vratnik, to experience one of Sarajevo’s highlights.

The fortress was built during the 17th century and was one of many defense points against the Austro-Hungarian troops. In Sarajevo, you’re going to eat history lessons for breakfast!

Speaking of breakfast, there’s no better way to get to know a place than to speak the language or to try local specialties. Don’t forget to try traditional dishes such as ćevapi, finger-sized sausages made from two types of minced meat that you eat with bread, raw onions and kaymak, a creamy local cheese.

The best time to visit Sarajevo is between May and September. Enjoy! 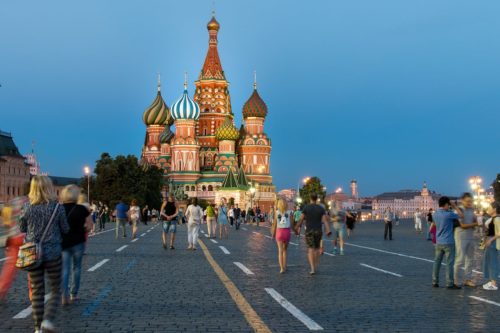 Moscow is the biggest representation of Russia’s expansion and change over the last few years.

Walk through the ages while paying attention to the architecture changes that took place over the years.

Moscow is one of the best cities in the world to see constructivist architecture, a popular style in the Soviet Union between the 1920s and early 1930s. While in Moscow, the most beautiful constructivist building you can find is definitely the Mosselprom Building.

This city is an incredible starting point if you want to explore everything Russia has to offer, from gorgeous natural parks to iconic buildings to unique styles of art.

You absolutely cannot leave Moscow without visiting Saint Basil’s Cathedral, which lays in the gorgeous Red Square, one of the most iconic places in the city.

People from Moscow are known to have clear Russian accents. To communicate with locals and ask where all the most scenic spots are, try to become conversational in Russian before your trip.

The best time to see the most beautiful parts of Moscow is early June. The weather isn’t crazy hot and you can enjoy long hours of sightseeing without any hassle. 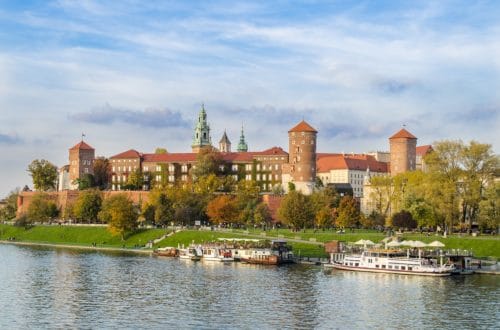 Kraków’s Old Town is so special that its historic center became a UNESCO World Heritage Site. Explore the city center and its beautiful homes, churches and palaces.

Kraków is a safe, beautiful, affordable city. And while the general population is young, the old architecture and history are what make this place amazing!

You can start by heading to the Wawel Royal Castle. The castle itself is already gorgeous, but it’s even better when you can enjoy the Italian-style courtyard and all the nature that’s been preserved.

Besides the castles, churches and cute streets, Kraków will introduce you to the finest Polish food you can find—and at super affordable prices!

Honestly, if the idea of walking around a gorgeous historic center while munching on pierogies doesn’t make you want to run to Kraków right now, I’m not sure anything else will.

The best time to visit Kraków is between May and June when the weather is already nice but the crowds haven’t arrived yet. 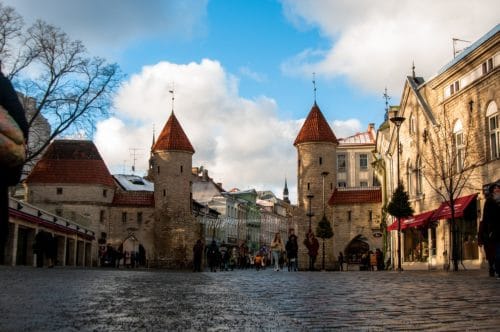 Even well-seasoned travelers struggle to point out Estonia on a map. Tallinn, its capital, is probably the single most underrated place in all of Europe. The city is extremely well preserved, and the Old Town is absolutely stunning with its medieval style and multiple viewpoints.

Cobbled streets, colorful buildings, medieval architecture, everything’s there. And to top it all off, it’s great for your wallet, as everything in the city is affordable.

In Tallinn, you must visit the neighborhood Kalamaja. It used to be the fishermen’s neighborhood because the biggest harbor in Estonia was there. These days, it’s the place to be if you want to see the most creative and artistic neighborhood in Tallin. While you’re there, head to Telliskivi Creative City, the creative center of Tallinn.

In Tallin, don’t forget to climb Oleviste Church, also known as St. Olaf’s Church, up to the observation deck so you can have one of the best views of the Old Town.

If you want to see this gorgeous old town covered in snow, head to Tallinn in March.

If your goal is to have an authentic experience with few fellow tourists, try to visit either in May or September. 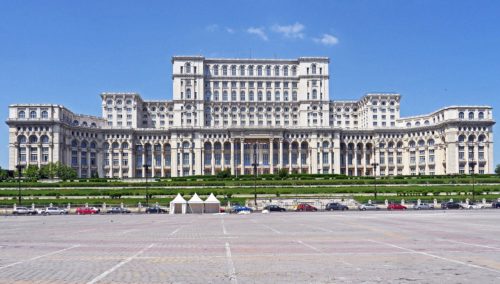 Bucharest is often called the Paris of Eastern Europe.

Granted, Paris and Bucharest are both home to romance languages and gorgeous in their own way. But hip cafes, tree-lined boulevards and incredible architecture make Romania’s capital unique. Bucharest is the ideal destination if you like to walk through beautiful streets, hang in nice restaurants and keep busy day and night.

To be impressed by one of the most remarkable landmarks in Bucharest, head to the Palace of Parliament. This mind-blowing building is the second-largest administrative building in the world, the first being the Pentagon in Washington D.C.

Make sure to snag tickets to The Romanian Athenaeum, right in the center of the city. This building is so intricately designed that you can spend hours just gazing at the details.

Romanians are also crazy about clubbing, so be prepared to have some fun around Lipscani Street over the weekend.

Before doing so, stop by in one of the multiple hip, affordable local bars and ask for a tuică, the quintessential Romanian drink that contains between 24-65% alcohol by volume. Romanians definitely like to play around!

If you want to see Bucharest at its best, head there in the spring, between March and May.

When I was in school, I hardly learned anything about Eastern Europe. When I arrived and witnessed how interesting and scenic the region is, I was stunned.

In fact, I wish I had discovered Eastern Europe earlier in my travels.

Are you ready to step out of your comfort zone and see some of the most gorgeous countries in the world?

Debbie Corrano is a digital strategist and writer. She works remotely while traveling the world full-time with her two dogs. Over the past few years, Debbie has lived in more than 10 countries, learned a few languages and worked with dozens of agencies and brands.

I turn ideas into stories and strategies. Working remotely with digital advertising and copywriting while traveling around the world with my two dogs.