So, you’ve finally arrived in France.

And it might be your first taste of argot (French slang).

But don’t worry, you’ll get the hang of it thanks to this post!

How to Learn French Slang Effectively

Learning French slang is simple but not easy.

First, get the right input: real, authentic content. You’ll need to toss aside your textbooks and start learning from TV shows, music videos, and the like.

French slang is everywhere: You just got to know where to find it! As explained by this video, some slang words are words that have actual meaning in French, but they have different meanings when used in an informal context. Other slang words are from verlan, French’s famed “inverted” way to talk.

And third, practice them frequently with your friends.

If this sounds like a lot of work, there’s another option: FluentU.

FluentU was designed to address exactly this problem.

FluentU brings such content within reach with interactive transcripts and a video player designed for learning French. For example, here’s a screenshot from a video by a popular video blogger: 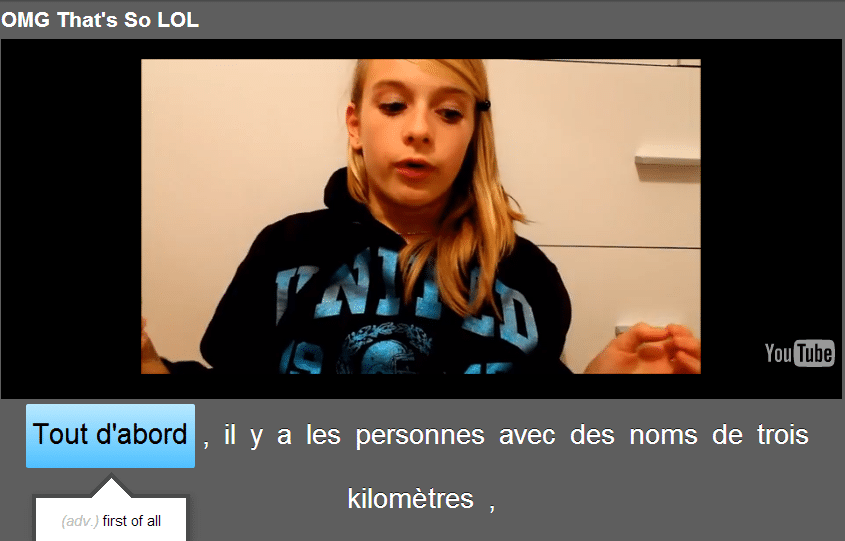 It tops this off with a review system which takes full advantage of all the videos on FluentU. And FluentU remembers your progress while learning vocab and uses it to recommend content from the rest of the FluentU library. OK, enough shameless self-promotion.

Below is a list of some of the more widely used slang words, which we hope you find useful.

Bordel literally means brothel. However, these days bordel is more commonly used to describe a large mess. An example would be: Range ta chambre. C’est le bordel.  Clean your room. It’s a mess.

Balle as a singular, literally means bullet. Yet back in the day, balles was used as a slang word for francs, the French currency pre-2002. And when France moved on to the euro, balles moved with it and it is still sometimes used in reference to money. An example would be: J’aime ton pantalon. Merci. Je l’ai acheté au marché pour quinze balles. I like your pants. Thanks. I bought them at the market for 15 euros.

The word baraque literally means shanty, or small house made of planks. However, recently the term has been adapted to refer to a house, or, as an adjective, baraqué,  someone who is really muscular.  For example: On habite dans une grosse baraque avec 10 colocs. We live in a large house with 10 other people. En règle générale, les joueurs de rugby sont plus baraqués que les joueurs de foot. Generally speaking, rugby players are more muscular than football players.

These days BG is a popular acronym. It stands for beau gosse, which means hot guy. Gosse on it’s own though is slang for a child though so watch out! If you’re in Quebec, gosse is feminine and carries an entirely different connotation as a slang word for a part of the male anatomy that is generally used in the plural… So if you’re planning to use your slang in Canada, be aware of that difference, since there could be a few misunderstandings!

Another popular acronym, which is the French slang for preppy, is BCBG (bien chic bon genre).

Bobo is actually baby talk for une blessure (an injury). However, you will find that young people commonly use this term when referring to minor injuries such as cuts and bruises. An example might be: Qu’est-ce qu’il y a? J’ai un bobo sur le pied. What’s the matter? I have a scratch on my foot.

Bouffer literally means to puff up or balloon in size. However, it has become common practice to replace the word manger (to eat) with bouffer in everyday speech. And in turn, la bouffe is then used as another word for food. Here is an example: J’ai trop mangé. J’ai bouffé un steak tartare avec des frites suivi d’une grosse tarte aux pommes. I ate too much. I ate a steak tartare with fries followed by a big slice of apple tart. Je suis allé en ville pour acheter de la bouffe. I went into town to buy some food.

A commonly used slang word, especially in Paris, is the argot for cigarette; une clope. For example: T’aurais pas une clope? You don’t happen to have a cig, do you?

Another term used by today’s generation, which you may not already know is the word  kiffer, which is slang for to like something (it works best with a hobby!). However, pay attention, if you kiffe quelqu’un, it implies that you desire that person. Here’s an example: Je kiffe faire de la voile. I really enjoy sailing. Je kiffe ton frère. I like your brother. (I’m romantically interested in him).

The word mec is yet another commonly used slang term, and refers to boyfriends as well as guys in general. For example: Il est beau, ce mec. That guy is good-looking. Tu viens avec ton mec? Are you bringing your boyfriend? Another type of slang that you might come across is verlan, which are French words spelled backwards, and often incorrectly, in slang. And while this concept might seem a bit intimidating at first, you will find that you pick it up in no time at all and probably without even realizing.

Our first example is meuf, which was originally femme. And, as with the word femme, this term can be used to refer to a female, or your girlfriend, although it can have pejorative connotations.

Our second example is relou, the verlan for lourd (heavy or taxing) and equivalent of chiant, which means annoying/exasperating. Here’s an example: C’est trop relou! That sucks!

Ouf is literally the French translation of the interjection phew as well as meaning crazy/awesome in verlan, being the backwards of fou (crazy/awesome). On a fait un truc (de) ouf hier.  *Here ’ouf’ can work as either an adjective, without the ’de’, or as a noun, with the ’d’. It’s up to you! We did something crazy awesome yesterday.

And finally, our last slang word for today is another way of expressing that you are annoyed or angry; être vénère, which is the verlan of être énervé. An example would be quite simple: Mathieu est vénère. Matthew is annoyed. (It is important here to pay attention to your accents because vénéré means to be revered).