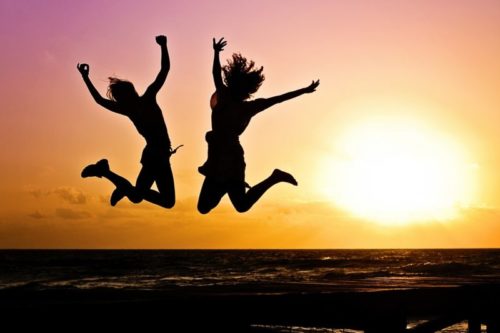 Set aside your flashcards!

It’s time to kick things up a notch from memorization drills and conjugation tables.

I have a new method for you that’s super effective in building confidence with Spanish verbs, no matter your level.

Plus it only requires two items: pencil and paper.

Yup, we’re going to do some writing, and it’s going to be incredibly helpful.

This is a slick tool for internalizing Spanish verb conjugations, allowing you to practice things like grammatical structures and vocabulary at the same time. Win-win-win!

Oh, and did I mention you won’t have to spend any time searching for things to write about? Read on for seven writing prompts, each tailored to a specific verb tense.

Why Writing Is Essential for Learning Spanish Verbs

Rote memorization can be one of the most tedious parts of language learning. And while some amount of rote memorization is necessary when learning Spanish verbs, it’s a great idea to spice up your verb practice with something more fun and dynamic like creative writing.

Plus, writing has some benefits that fill-in-the-blanks or flashcards don’t. When you use a new vocabulary word as part of a story or composition, you’ll be able to associate that word with a narrative, a person or a memory. This will help fix the word in your mind so you don’t forget it immediately after studying!

Finally, since each of these writing prompts is designed to target a specific verb tense, you can tailor your practice sessions to the specific verb conjugations that you need to practice. And you can do it all while getting in some important grammar and vocab practice as well.

Tips for Learning Spanish Verbs Through Writing for Beginner, Intermediate and Advanced Learners

No matter your level of Spanish, writing is an important part of learning and memorizing verb conjugations. Luckily, these prompts can be used by beginner, intermediate and advanced learners! Here are some tips to get the most out of these prompts, regardless of your level.

If you’re a beginning Spanish learner, there will inevitably be vocabulary words that you don’t know. Don’t fret or get frustrated! Instead of reaching for a dictionary every time you’re at a loss, simply leave a blank space.

When you’ve finished the end of your composition, go back and look up the words you didn’t know. At this point, you can make a list of those new vocabulary words that you can reference later.

The same goes for verb conjugations. If you don’t remember how to conjugate a verb, write it in its infinitive form and flag it with a star or question mark. At the end, go back and look up the correct conjugation.

No more leaving blank spaces on the page! Once your Spanish is at an intermediate level, it’s time to focus on making yourself understood in any situation, even if you can’t always think of the right word.

So if you can’t think of a specific vocabulary word, find a way to describe or express it. Flag this with a star or question mark to remind yourself to later look up the actual word.

Advanced Spanish speakers should be able to communicate in almost any situation. Now, it’s time to focus on diversifying your word usage. Why not make your compositions into mini-competitions with yourself?

You can boost your verb learning by watching authentic Spanish videos on FluentU—like music videos, news, movie trailers and motivational talks—then writing down some of the sentences from the dialogue or your thoughts on the clip, depending on your skill level.

FluentU is conveniently organized by difficulty level so you won’t waste any time looking for the right videos for you!

1. Daily Routine (with a Twist)

If you’ve taken a Spanish class, chances are you’ve had to write about your daily routine. This prompt is great because it forces you to practice present simple verbs, which are commonly used to talk about repeated or habitual actions. However, writing about your morning coffee and shower routine can get a little dry.

So, for this writing prompt, try to write about a daily routine from someone else’s point of view. Pretend you’re someone else—a celebrity, a farm animal, a person from the future, an alien—and write about “your” daily routine. Not only is this a fun exercise in creativity, it also allows you to incorporate new vocabulary.

When writing about your own morning routine you might be confined to verb phrases like hacer la cama (make the bed) and ir a la escuela (go to school), but writing from a different perspective allows you to become more creative with your verb use. For example:

Soy un gato. Cada mañana, cazo ratones en el jardín. Luego, los llevo a la mesa y se los doy a mi dueño humano.
(I’m a cat. Every morning, I hunt rats in the garden. Then, I bring them to the table and give them to my human owner.)

Keep practicing: Instead of writing from a first-person point of view, write as though you’re reporting on someone’s daily routine. This will allow you to practice third-person verb conjugations. Since in Spanish, first- and third-person conjugations are often quite different in the present simple, it’s worth your time to practice them both.

For this writing prompt, write a postcard to a friend or family member as though you’re on vacation. Describe what’s going on around you and what you’re doing as you write.

This particular prompt is great for practicing the present continuous tense, which is used to talk about actions happening in the moment of speaking.

Keep practicing: Find a classmate or a writing partner. Each of you should choose a vacation location and write a postcard to the other, without mentioning what place you’re writing about. Instead, try to convey it through your description of what’s happening around you. Then, switch postcards and try to guess where the other person wrote about.

Focus on: Preterite and imperfect tenses

Reflecting on events in your life in a diary format is a great way to practice preterite and imperfect verbs. You can do this in many ways. You could simply write about what has happened to you that day, write about a day in the past (a fun vacation day, for example) or invent a diary entry from someone else’s perspective. Whatever stokes your creativity!

Hoy fui con mi madre al parque. Empezó a llover y nos fuimos a casa. Cuando llegamos, yo tomé un café y ella tomó un té.
(Today I went with my mother to the park. It started to rain and we went home. When we arrived, I had a coffee and she had a tea.)

Keep practicing: Why not turn this writing prompt into a nightly routine? Keeping a journal can be a great way to get in your daily Spanish writing practice. Plus, it’s a great way to keep track of your progress over time.

Take ten minutes every evening to write a paragraph or two about the day’s events. It’ll be a lot of fun to look back over your writings in the future!

Everyone’s an expert at something. Choose a task that you know how to do well, and write a step-by-step explanation of it as though you were guiding a friend through the process.

This prompt is a great way to practice the Spanish commands. Plus, depending on what your specific hobby or area of expertise is, this could be a great way to learn new, specific vocabulary that’s relevant to your interests.

So now, re-write your step-by-step instructions, but this time pretend you’re giving those directions to your boss (use the usted form), a group of friends (use the vosostros form) or the Spanish royal family (use the ustedes form).

5. Never Have I Ever

Have you ever played the party game “Never Have I Ever”? The point of the game is to reveal things you’ve never done, in order to get others to reveal that they have done them. In Spanish, the game is called Yo nunca (I never). It’s great for getting to know people—and, incidentally, it’s also great for practicing the present perfect tense.

For this writing prompt, write sentences about things you’ve never done, starting with the phrase Yo nunca (I’ve never) followed by a present perfect verb.

Yo nunca he viajado a China.
(I’ve never traveled to China.)

Keep practicing: Convert your phrases into questions as though you were asking a friend if they have ever done the action in question. You can start your questions with the phrase “Alguna vez has…” (Have you ever…)

The subjunctive can be difficult for English speakers to wrap their heads around, especially because it has many different uses. One is to talk about hypothetical situations. In this writing prompt, write about a hypothetical perfect friend.

What qualities would they have? What kinds of things would you do together? Use the phrase “Quiero un amigo que…” (I want a friend that…) because it’ll necessitate use of the subjunctive mood.

Keep practicing: Write about other hypothetical “ideal” people. What would your ideal employee look like? Your ideal partner? Roommate? Pet? All of these prompts will necessitate a different set of vocabulary, allowing you to practice even more conjugations.

We use third conditionals to talk about impossible hypothetical events. An example of a third conditional in English would be something like, “If you hadn’t arrived so late, you would have gotten a piece of pizza.” Since the speaker is talking about a past event, the outcome described is impossible.

To practice third conditionals, turn to the world of counterfactuals! Think of an event in history, or in your own life. How would things be different if the event had never happened, or had happened differently?

Here are some examples to get you started:

And here’s part of a sample response in Spanish:

Si no hubiera conocido a mi mejor amiga, nunca habría aprendido a tocar la guitarra.
(If I had never met my best friend, I never would have learned how to play the guitar.)

Keep practicing: Try writing this prompt in second-person question form, as though you were asking a friend. This way, you practice both the construction of a third conditional question as well as the tú conjugations of verbs. For example, you might ask: Si no me hubieras conocido, ¿habrías aprendido a tocar la guitarra? (If you had never met me, would you have learned to play the guitar?)

These writing prompts are a fantastic way to get started, but the most important thing is just to write anything—about any subject!

Working to form sentences and narratives in Spanish can be difficult at first. But just like any other skill, as you keep working on it, it’ll feel more and more natural.

Writing prompts are a great way to practice Spanish, and you just might have some fun while you study!