Spanish Conjugation: Your Ultimate Guide to Conjugating Any Spanish Verb

Did you know that Spanish verbs will look different depending on the subject, the tense and the mood of the verb?

That’s what Spanish conjugation is! And it’s important that you know how it works so you can communicate effectively and accurately.

In this post, I’ll walk you through the fundamentals of Spanish verb conjugation, starting with the most basic rules and then working through irregularities and other wrinkles.

The Basics of Spanish Conjugation

When conjugating Spanish verbs in the present tense, you first need to identify who’s performing the action. This is your “subject.” There are eight possible subjects:

Note: vosotros/vosotras is a regional pronoun used only in Spain; it’s replaced by ustedes in the rest of the Spanish-speaking world.

Now that we know who’s performing the action, we’ll need to conjugate by picking the correct verb ending depending on who the subject is.

Spanish verb infinitives (a.k.a. the dictionary version of the verb) end in the letters -ar, -er or -ir.

To conjugate an infinitive, you need to remove the final two letters and add the appropriate ending.

To find the appropriate ending, you will need to consider which tense and mood you’re using and whether the verb is regular or irregular.

Regular Verbs in the Present Tense

The Spanish present tense is used for facts that are true in the current moment and general statements:

Yo hablo español. (I speak Spanish.)

It’s the most basic and common Spanish tense, so it’s the ideal place for beginner conjugators to get started.

Here’s how you’d conjugate hablar (to speak). You use the same verb endings to conjugate other regular -ar verbs.

For regular -er verbs, such as comer (to eat):

For regular -ir verbs, such as vivir (to live):

Here are a few examples of this tense in action:

Reflexive Verbs in the Present Tense

Reflexive verbs perform an action on themselves. That is, they have a subject that’s the same as the object, such as in the sentence “I weigh myself.”

You can spot these in Spanish because their infinitive verb form often includes a pronoun, for example:

The following reflexive pronouns can be used for reflexive verbs in any tense:

¿Por qué no te afeitas? (Why don’t you shave [yourself]?)

Conjugating in the Present Progressive Tense

The present progressive tense is used to refer to actions happening right now. In the English language, this would refer to verbs ending in -ing.

To form sentences in the present progressive, you must first know how to conjugate the verb estar (to be):

Then, change the ending of the action verb as follows:

Let’s look at escribir (to write) as an example. To say “I am writing” in Spanish, we will:

Conjugating in the Past Tense

The past tense, or the preterite, refers to the simplest form of the Spanish past tense. In English, conjugating to the past tense would typically involve adding the suffix -ed to a verb.

Basically, use this tense to talk about things that have already happened.

The following table will show you how to conjugate -ar verbs in the past tense:

In this verb tense, the -er and -ir forms have the same ending:

Note the placement of accents in this verb tense: They’re important but are only used for the first and third person.

Ayer llamamos a nuestra abuela. (We called our grandma yesterday.)

Conjugating in the Future Tense

Many consider the future tense to be one of the easiest to conjugate in Spanish.

When you conjugate Spanish verbs to the future tense, you simply add the ending to the end of the infinitive form of a verb. The ending will be the same for all verbs.

Here are the verb endings for the future tense:

Check out a few more examples of the future tense at work:

Note that the future tense is reserved for a slightly more distant future. This tense is often not used for something that will happen in the very near future (as in hours or minutes).

When something is happening relatively soon, but still somewhat in the future, you’d more often use the present tense, or the ir + a + infinitive form, to describe this.

In Spanish, many verbs don’t follow the rules of conjugation that we’ve covered. These are called irregular verbs.

Irregular verbs are very common and in most cases, you’ll just have to memorize their special conjugations.

Stem-changing verbs have the same conjugations as regular verbs. Their irregularity is seen when their stem—the part that remains when you drop the -ar / -er / -ir ending— changes.

There are four main types of stem changes that can occur:

This is what those stem changes would look like using the yo form as an example:

The stem change applies to all forms of the verb except the nosotros and vosotros forms.

Some verbs are only irregular when you conjugate them to their yo form. There are various kinds of verbs that have irregular yo forms.

These are only a few of the patterns and the only way to really remember them is to memorize which verbs follow them.

Here are a few examples of verbs with irregular yo forms:

Some verbs change their spelling when they’re conjugated a certain way. You can see an example of this with -uir words.

They’re conjugated normally for the most part, but the i becomes y in all forms except for nosotros and vosotros.

Another example is verbs ending in -cer and -cir. To keep the “th” sound, the letter z is used in the first person conjugation (I).

If there’s a consonant before -cer / -cir, the c changes into a z:

If there’s a vowel before -cer / -cir, the z is added before the c:

There are some special irregular verbs that just completely drop all rules and do their own thing. It’s best to just memorize these verbs and forms.

Two of the most common verbs with special irregular forms that you need to remember are ser (to be) and ir (to go).

Here’s how you conjugate ser in the present tense:

And here’s how you conjugate ir in the present tense:

How to Practice Conjugating Spanish Verbs

If you’re just getting started, learning how to conjugate Spanish verbs can be a bit overwhelming.

If it’s not instant recall yet (and it won’t be for a while), the following techniques and tools can help you to bridge the gap.

For starters, you can create three sets of flashcards for super-efficient practice:

Choose a card from each set at random and test your ability to conjugate Spanish verbs on the go. This will help you to develop conversational fluency with quick recall.

For a high-tech version of this, Spanish411 offers an online tool for practicing verb conjugations.

If you want to see how verbs are conjugated and used in natural speech, you can also check out FluentU.

FluentU provides you with native-made videos ranging from movie clips and commercials to inspirational talks and speeches, so you’ll have plenty of opportunities to hear verbs be conjugated and used in speech. 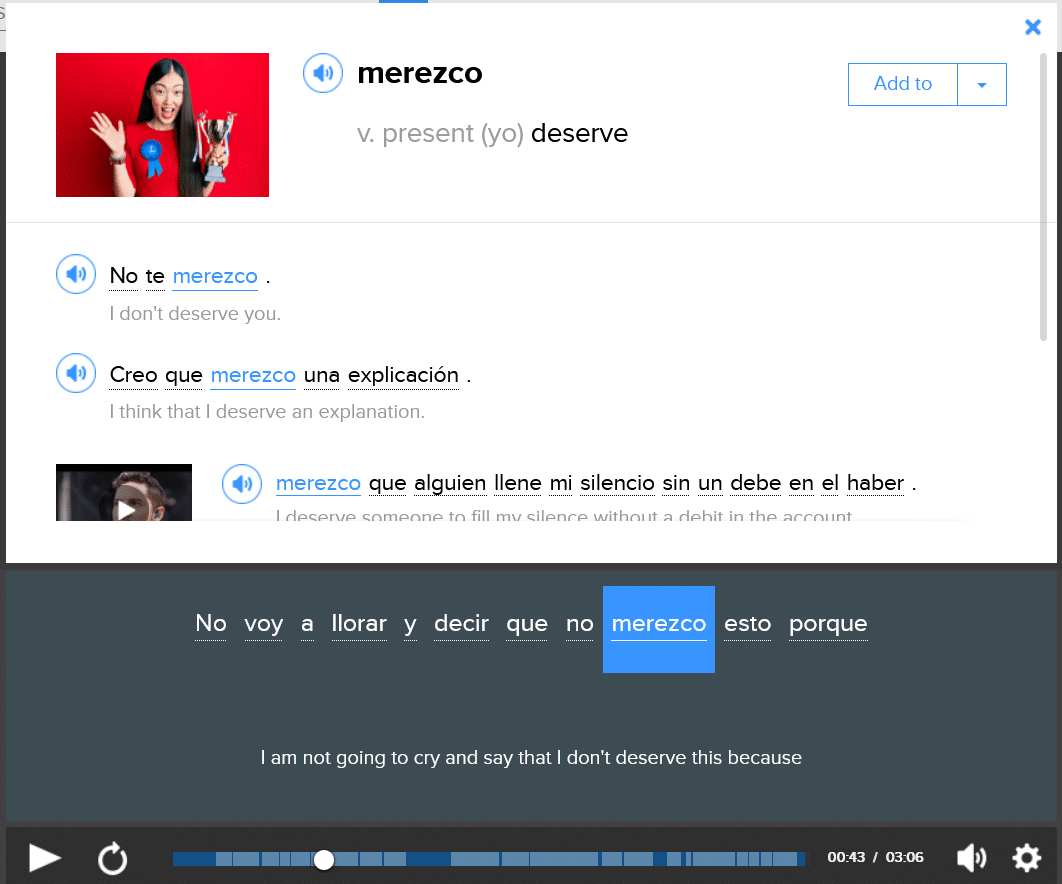 You’ll even have the option to create flashcards and take quizzes on the verbs that you want to study! FluentU is available on iOS and Android.

You’ll conjugate hundreds of verbs before finally feeling like you’re getting the hang of things, but with time, conjugation will come naturally.