20 of the Most Common Irregular Spanish Verbs You Should Know

Let’s hear it for the outcasts, the weirdos, the totally, proudly irregular.

Right now, like a lot of Spanish learners, you might not be a fan of irregular verbs.

Yes, they’re harder to learn because they don’t follow standard conjugation patterns. But they’re not always as baffling as they seem.

In this post, we’ll show you some of the secret patterns underlying lots of Spanish irregular verbs, plus tips to master 20 of the most common ones.

Why Irregular Verbs Aren’t as Hard as They Seem

Irregular verb conjugations might seem totally random and crazy when you start learning them.

However, recognizing that there’s a method to the madness can help you get more comfortable with irregular verbs and learn them more quickly.

Irregular verbs tend to be high-use verbs, so you’ll be encountering them early and often, so you’ll get lots of opportunities to practice using them.

Irregular verbs often sound better and are easier to pronounce than they would be if they were conjugated regularly.

Finally, many irregular verbs share rules and patterns, so the more often you see Spanish irregular verbs, the more familiar you’ll become with the patterns of their irregularities.

You can see irregular verbs in use with FluentU, which shows you Spanish as it’s spoken with videos like movie clips, music videos and more.

You can also save flashcards, interact with the subtitles to check definitions and take personalized quizzes that give you ample chances to type, read, hear and even speak your saved verbs until you’ve internalized them. 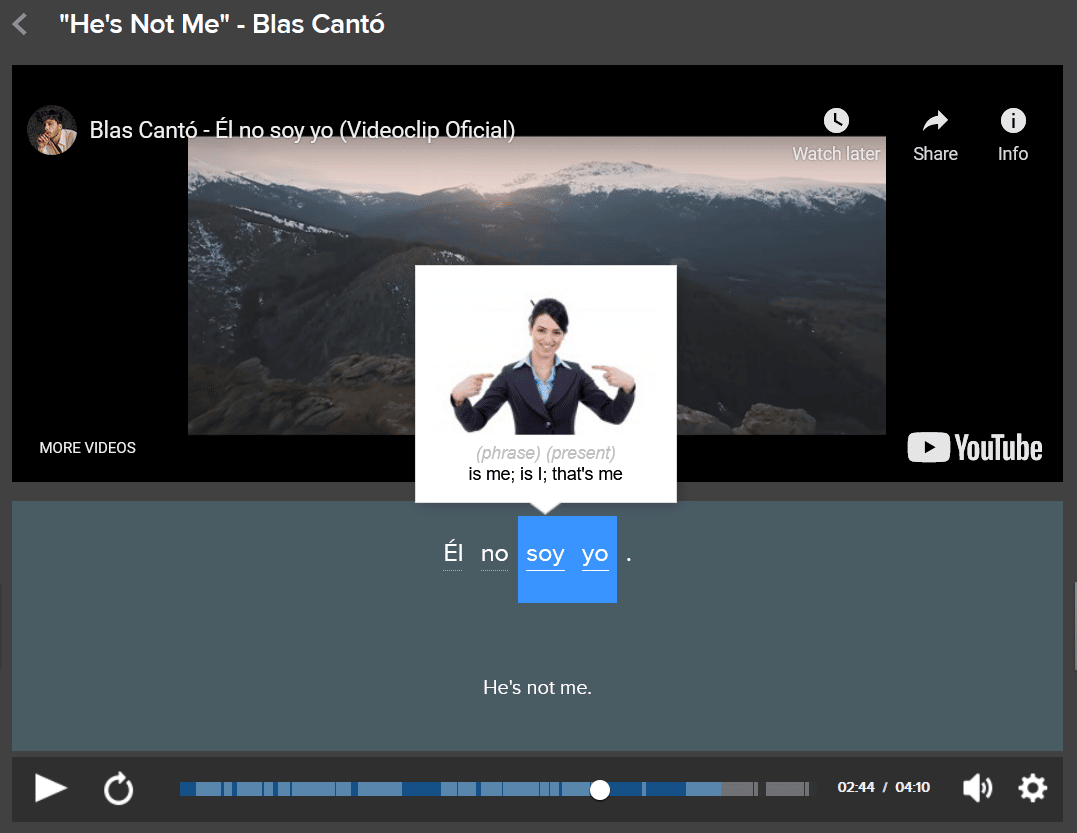 You can try FluentU in your browser or get the iOS or Android app to study when you’re on the go.

Ser is particularly irregular in all of the present, past and subjunctive tenses, as well as the imperative, but it does follow the rules for the future, conditional and past participle.

This form of to be is used when something or someone has a quality, possession, price or origin.

¿De donde eres? (Where are you from?)

Fuimos los campeónes. (We were the champions.)

Estar also has its own unique conjugations, though it’s regular in more tenses than ser (to be).

It’s irregular in the present, past and future subjunctive.

This to be is used for feelings, locations and temporary states.

Haber is used as an auxiliary verb in the same way that English uses have, for example, he comido (I’ve eaten).

Conjugations of haber you’ll use often include hay (there is/are) and hubo (there were).

Hubo un accidente en la autopista. (There was an accident on the road.)

4. Tener – to have/to have to do something

The present and subjective form of tener is completely irregular, but otherwise its irregularities often just involve an e-to-ie stem change, and tuv– for the past and subjunctive future.

Poder follows the same model as many irregular verbs, changing o to ue or to u, though be aware that its future form gets a bit complex.

In all irregular verbs, when these changes to ue occur, nosotros is never affected.

¿Puedo ayudarle? (Can I help you?)

Hacer breaks all the rules in all the tenses, except the present tense—apart from yo.

Other verbs that follow exactly the same pattern include deshacer (undo) and satisfacer (satisfy).

No hago deporte. (I don’t do sports.)

Me haces reir. (You make me laugh.)

Ir is another verb that’s uniquely irregular in all of the tenses.

For poner, the stem changes to u in the past tense.

Puse los libros en los estantes. (I put the books on the shelves.)

Decir is conjugated in the same way as bendecir (to bless) and maldecir (to curse or insult).

Ver is another unique verb that doesn’t share the patterns of any other.

Querer’s stem changes to i in the past tense. Bienquerer (to be fond of) and malquerer (to dislike) conjugate in the same way.

Te quiero mucho. (I care about you a lot.)

Like many irregular verbs, saber is irregular in the first person present tense and its stem in the past tense consistently changes to u.


Él sabe todas las respuestas. (He knows all the answers.)

The main way llegar is irregular is that its e changes to ue in the present subjunctive. Otherwise, it’s mostly regular.

Llego a Caracas el jueves. (I arrive in Caracas on Thursday.)

Creer shares its conjugation pattern with a number of verbs, including desposeer (to dispossess), desproveer (to deprive), poseer (to own), proveer (to provide) and sobreseer (to discontinue).

Its present tense is regular.

No todo el mundo cree en Dios. (Not everyone believes in God.)

Encontrar is another o → ue verb.

Encontraron el cuerpo en el pecio. (They found the body in the wreckage of the ship.)

Me encontré a tu amigo en la calle. (I bumped into your friend in the street.)

Venir conjugates in a similar way as tener (to have), with the first person present tense changing to a g, vengo.

Vengo de lejos. (I come from far away.)

Pensar has an e → ie verb change in the present simple and present subjunctive.

A lot of verbs follow this pattern, such as alentar (to encourage), apretar (to squeeze), calentar (to heat), cerrar (to close) and confesar (to confess).

Notice they’re all -ar verbs with an e in the second to last syllable.

No piensa salir con ella. (He doesn’t plan to go out with her.)

Conocer shares its conjugation pattern with abastecer (to supply), atardecer (to get dark), apetecer (to feel like), aparecer (to appear), desobedecer (to disobey), parecer (to seem like) and reconocer (to recognize).

Conozco a Pablo desde hace tiempo. (I’ve known Pablo for a while.)

Sentir shares its conjugation with a lot of ir verbs with an e in the second to last syllable, such as advertir (to warn), invertir (to invest), mentir (to lie), preferir (to prefer), hervir (to boil) and herir (to injure).

Siente calor. (He feels the heat.)

Volver is an o → ue verb that shares its conjugation pattern with a range of similar verbs such as llover (to rain), morder (to bite), resolver (to resolve), absolver (to absolve/to pardon) and disolver (to dissolve).

Volvieron a hacerlo porque hubo errores. (They did it again because there were mistakes.)

Once you have these 20 irregular verbs down, you have the basics of Spanish communication in the bag.

Remember that you actually have to use them daily if you want to learn them, whether it be through speaking or writing in Spanish.