Haber Conjugations: The Complete Guide to this Spanish Verb in All Its Forms

How would you shout “Hey, there are whales over there!” in Spanish?

Well, I’ll tell you. This is the complete guide to one of the most useful words in the Spanish language: haber (to have).

Read on to learn how to use haber as an impersonal verb, as an auxiliary verb and as a participle.

We’ll also cover all of the haber conjugations, some common expressions that use a form of haber and ways to practice using the verb yourself.

The Uses of Haber

Haber can be used in a few ways, each with their own forms and rules.

As an impersonal verb

The most basic use of haber is to indicate existence.

Hay una mesa en el comedor.
(There is a table in the dining room.)

It can also indicate the existence of something intangible:

Hay química entre nosotros.
(There is chemistry between us.)

Haber as an impersonal verb can also indicate a lack of existence.

No hay ninguna cama en la cocina.
(There isn’t any bed in the kitchen.)

No habrá posibilidad de amor en mi vida, porque Ana no me quiere más.
(There will be no chance of love in my life because Ana doesn’t love me anymore.)

A simple way to use it is to ask about products in stores:

¿Hay velas?
(Are there any candles?)

A more advanced way to employ it is when making vague proclamations:

Hay demasiada tristeza en las noticias.
(There is too much sadness on the news.)

Siempre hay gente que no cree en lo verdadero.
(There are always people who don’t believe in what is true.)

And when coupled with que, haber as an impersonal verb shows what must happen or what must be done:

Did you recognize the form?

When used as an impersonal verb, haber is always conjugated in the third person (that’s what makes it “impersonal”).

One thing to note is that when discussing plural objects in everyday conversations, the third-person plural form of haber may pop up from time to time.

However, it’s highly encouraged by language academies to only use the third-person singular conjugation and ignore the grammatical number of the object.

As an auxiliary verb

Haber can also function as an auxiliary verb. That means it acts as a helping verb to support the sentence’s main verb.

In this function, haber and its companion verb express an action that has been or will be completed. It’s roughly equivalent to the English “have” or “had.”

Había salido.
(I had left.)

Notice that when haber is used as an auxiliary verb, it is always followed by another verb in the past participle form (ending with –ado or –ido). That’s basically how you form the perfect tenses, as you’ll later in the post.

Finally, the verb haber can also be used as a participle.

You may see it in the present participle form (also known as the gerund), which never changes: habiendo.

You may also see haber in the past participle form, paired with its auxiliary verb form: haber + habido.

Ha habido muchos cambios este año.
(There have been a lot of changes this year.)

Remember that as an impersonal verb, haber indicates existence and is always conjugated in the third-person form.

In the following charts, irregular endings have been bolded.

Haber conjugations in the indicative

The indicative mood discusses facts—things that have happened, are happening or will happen.

Conjugate haber as an impersonal verb in the indicative mood like this:

Haber conjugations in the subjunctive

Here’s how to conjugate haber as an impersonal verb in the subjunctive mood:

There are some useful phrases that use hay, the present indicative form of the impersonal verb haber:

When haber is used as an auxiliary verb, it works with another verb in the past participle form to talk about actions that have been or will be completed.

Again, bold endings in the charts are irregular conjugations.

Haber conjugations in the indicative

In the indicative mood, you’ll see these forms of the auxiliary verb haber:

Remember, these forms will be followed by another verb ending in –ado or –ido!

You may also see haber together with its past participle form.

In reality, you’ll only really encounter the third-person singular form.

Haber conjugations in the subjunctive

In the subjunctive mood, haber conjugates like this alongside the past participle form of another verb:

And it appears together with its past participle form.

Just like the perfect tenses in the indicative mood, you’ll only ever use haber + habido in the third-person singular form.

How to Practice with Haber

A simple exercise you can do with haber is to describe what exists and what doesn’t using a set of nouns.

For example, have you recently learned Spanish household vocabulary? Then you can practice writing (or saying) sentences like:

You can also repeat this exercise to discuss a situation in the past (using the correct haber conjugations, of course!).

For even more practice, you can watch the authentic Spanish videos on FluentU and listen for the different uses and conjugations of haber. 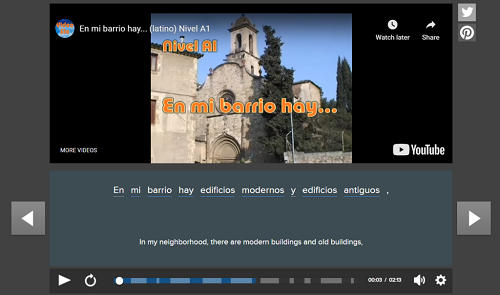 Watch video clips like talk shows, movies and music videos to immerse yourself in Spanish the way native speakers really use it.

Learn new words from the interactive subtitles, save them to your personalized vocabulary deck and quiz yourself later on the web or on your Android or iOS device.

I think it’s your turn to practice haber conjugations now.