The Complete Guide to the Spanish Future Tense: When and How to Use It

So you can talk about the present in Spanish, you’ve finally got your head around the past tenses too, so now there’s only way forward… and it may cause flashbacks from high school Spanish.

So let’s go back…back to the future!

And yes, I did just add that last bit in so I could use the phrase “Back to the Future,” but it was totally worth it.

The Most Common Forms of Spanish Future Tense

When people talk about “the future form” in Spanish, they are often referring to this tense.

To form the future tense in Spanish, we need to take the infinitive form of the verb and add these endings to it: -é, -ás, -á, -emos, -éis and -án. Each ending corresponds to a different subject, and are the same whether you’re using an –ar, –er, or –ir verb.

Note that there is an accent on the first letter of every ending, except the “we” form –emos.

Uses: This tense is used in Spanish much like “will” is used in English. We use it to make predictions about the future, assumptions or guesses about the present and give commands.

Lloverá mañana. (It will rain tomorrow.)

Some verbs are irregular and don’t follow exactly the same pattern as above: though they use the same endings as the regular verbs, the stems will change.

Here are some common irregular verbs that are worth learning:

How do we make the Spanish equivalent of “going to?” It takes a simple formula:

Here’s an example of the formula in action, using hablar (to talk) to say “going to talk”:

As long as you use the ir + a, you can use this with the infinitive of any verb.

Uses: Just like in English, we use the “going to” tense whenever we are talking about things that we have already planned that are typically in the near future.

Voy a viajar a Guatemala. (I’m going to travel to Guatemala.)

To ask someone if they are willing to do something in the future, use querer in the present tense plus the infinitive:

¿Quieres ayudarme a mudarme? (Will you help me move?)

¿Quiere lavar mi ropa? (Will you wash my clothes?)

You may not realize it, but we use the present to talk about the future all the time in English. Think about what you would say if I asked what time you were leaving the house tomorrow.

It’s similar in Spanish, though they tend to use the simple present tense instead of the present continuous tense that we usually use in English.

Use the present tense to talk about the future in Spanish anytime you would in English, usually when someone asks you in the present about something you’re planning to do.

This is used when you want to talk about something that hasn’t happened yet but will. For this, you need to use the future indicative form of haber plus the past participle.

You can create the past participle of a verb by dropping the –ar, -er or -ir ending and adding -ado for ar verbs or -ido for er and ir verbs.

Here is what that would look like using hablar as an example:

Here are some examples of the future perfect in use:

Habremos terminado antes de que llegue. (We will have finished before he arrives.)

Habré ido a la universidad. (I would have gone to college.)

Here are some words you should know if you want to talk about future plans:

How to Practice the Spanish Future Tense

The best way to drill these into your mind is to see how native speakers use them. Maybe you can find a Spanish-language TV series about time travel, or just find a copy of The Time Machine in Spanish. Whatever you do, watch out for how these verbs are conjugated.

You could also use an online immersion program. FluentU, for example, takes short videos about many different topics (covering the past, present, and yes, future) and adds annotated subtitles for instant definitions and additional content for unfamiliar words. 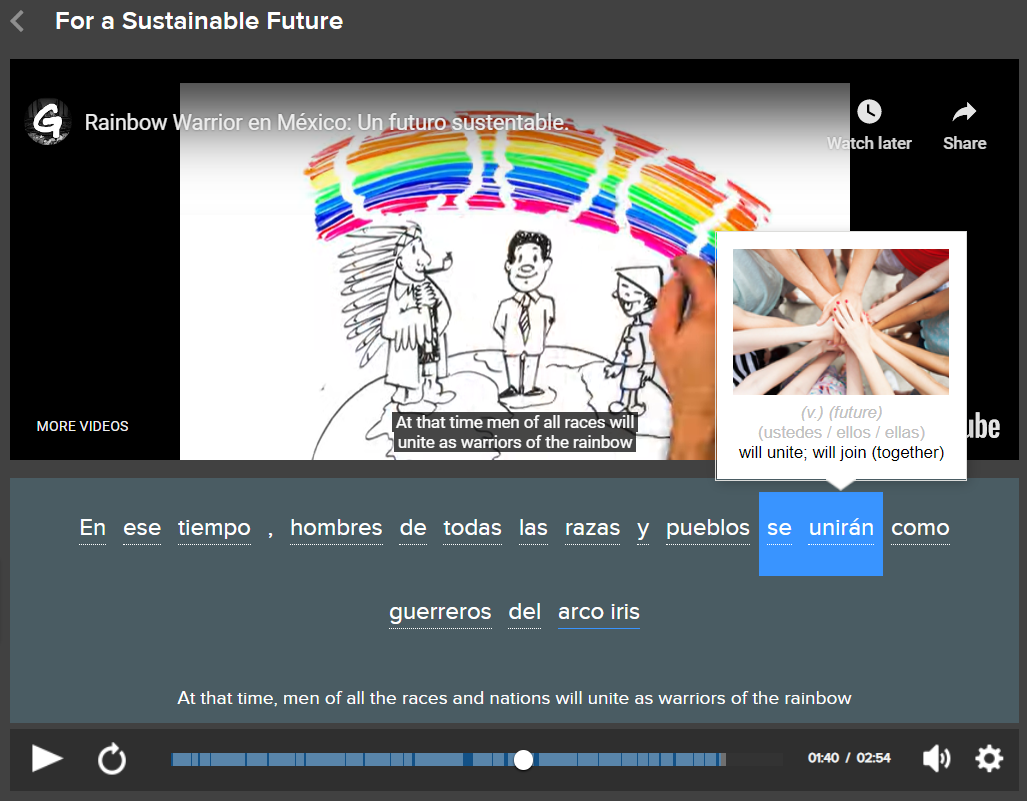 You can find FluentU on iOS and Android.

The more resources you use, the more grammar you’ll be exposed to. The future tense comes up in all sorts of conversations, and hearing it used in context will help you remember it better.

We hope that la próxima vez (the next time) you want to talk about the futuro (future), you’ll have no problems at all.