The Starter List of 50 Common Spanish Adjectives for Beginners

Don’t see the world in black and white.

It’s so much more vibrant and colorful than all that.

Although bueno and malo might be enough adjective-wise to scrape by on for a while (read: a week or so), dividing the whole world into “good” and “bad” isn’t only boring for those who have to listen to you, but it’s also limiting.

But if you’re worried that learning more adjectives will be time-consuming and a strain on your brain, stop that thought there.

Did you know that many common Spanish adjectives are very similar to their English counterparts?

Learning a language is about expressing yourself, and just as you like to explain your thoughts and feelings on a variety of situations, objects, films, places and people with a whole load of different words in your own language, there’s no reason why you can’t do the same in Spanish.

Adjectives also add color, interest and variety to your Spanish and help you explain yourself and others better.

Where Does an Adjective Go in a Spanish Sentence?

The order of adjectives is something that many beginners struggle to get their heads around, but just remember that unlike in English, Spanish adjectives usually go after the noun. So instead of saying “he has beautiful blue eyes,” you say the equivalent of “he has eyes blue beautiful”—“tiene unos ojos azules preciosos.”

It might sound weird at first, but once you get the idea, noun before adjective will come naturally to you.

For the purpose of this post, all adjectives will be written in masculine singular. Click here for more information on the ins and outs of the order of adjectives in Spanish.

Of course, adjectives can behave quite differently in the wild, away from the lab-like confines of this article. To really understand how adjectives are used by native Spanish speakers, you may need to eavesdrop on some conversations.

Or just get a program like FluentU and find hundreds of authentic videos for all your adjective learning needs. FluentU is a language learning program that aims to teach Spanish naturally through movie clips, music videos, vlogs and other short videos that are made by and for native Spanish speakers.

There are a few ways to see adjectives in use through FluentU’s video:

One is to just watch whatever videos interest you (sort them by difficulty and topic to find the perfect ones) and catch the adjectives in each video.

FluentU has a key word bank, transcript and interactive subtitles that can all help you do this. Click on any word in the subtitles for a definition, example videos and sentences and a chance to add it as a flashcard. 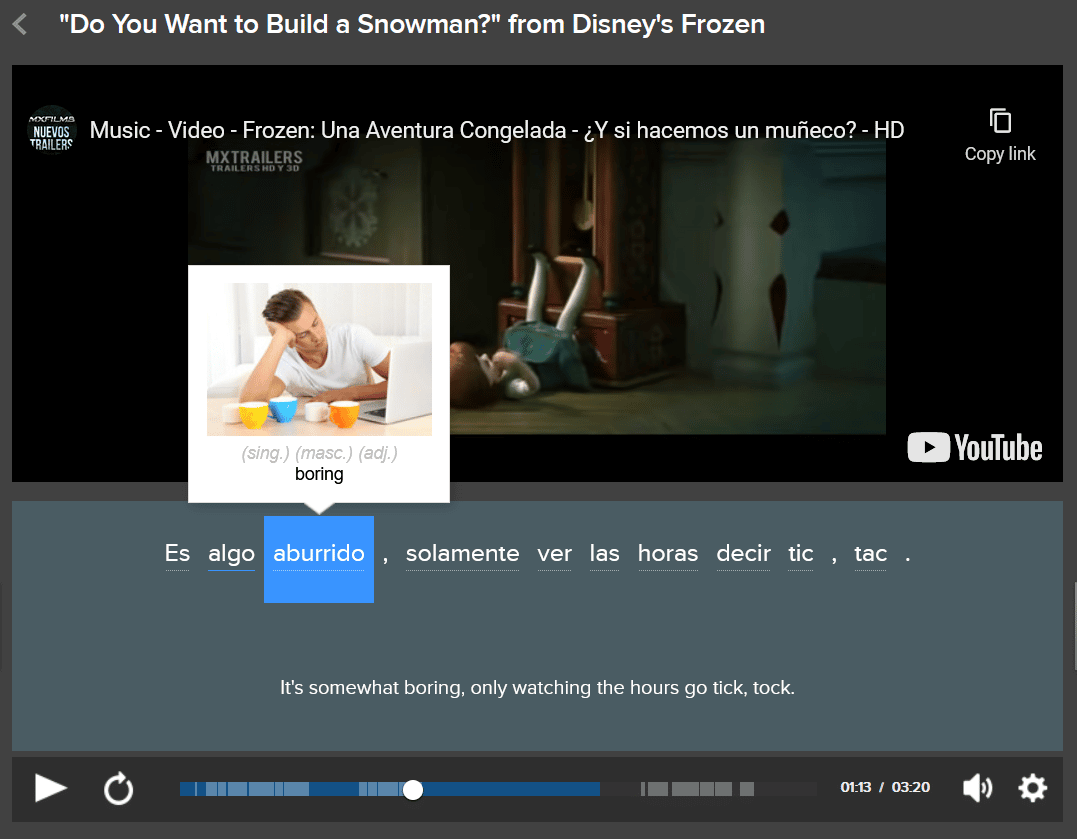 Another way you can find adjectives on FluentU is by literally searching for the words in this post. You’ll find each word’s flashcard and see videos where it’s used. 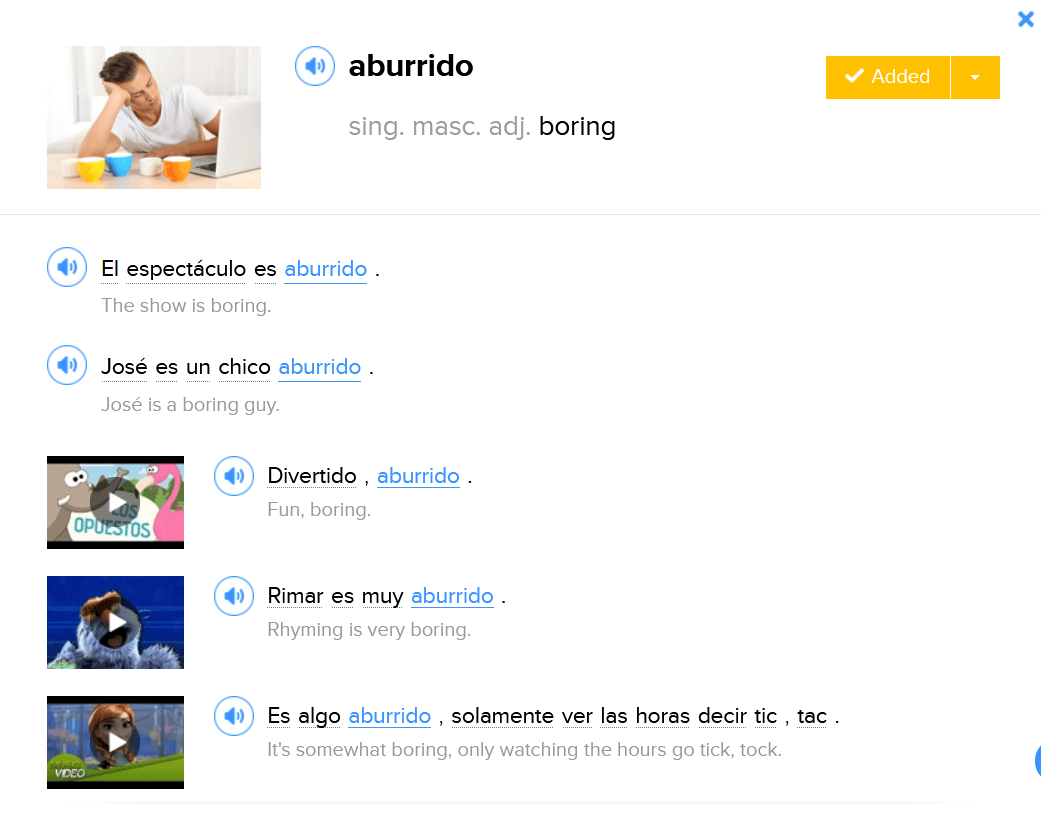 When you’ve amassed a collection of adjectives, you can practice them with FluentU’s adaptive and multimedia quizzes. These will have you typing, selecting and speaking your vocabulary words.

FluentU is available in your browser as well as the iOS and Android apps. And with the program’s help, you’ll get a good idea of how to use adjectives in real context.

And now that you know how to add adjectives to your sentences, let’s get going with that great list I promised.

50 Common Spanish Adjectives to Describe the World Around You

I don’t think anyone ever talks about ugly eyes, but there’s plenty more in life that can be feo, such as the appearance, behavior or performance of someone or something.

For more on the differences between temporary and permanent happiness—from a grammatical point of view, that is, we’re not getting existential on you—see this post on when to use ser and estar.

You can’t be happy all the time! Here’s how to talk about feeling down.

Now we’re getting into some physical properties here.

Not everyone’s the same, so you need to know how to describe a spectrum of traits.

Y algunas son bajas. (And some are short.)

Just like Pharrell’s smile. Note that normally adjectives ending in -e are the same for both for masculine and feminine nouns.

We should take un pequeño recreo (a small break) from talking about Pharrell.

This one really is simple.

Just take care to get your pronunciation right. Unlike in English, the Spanish word has stress on the beginning of the word. While in English, you pronounce this word sim-PLE (or sim-PULL, phonetically), in Spanish, the stress is on the first syllable, making it SIM-ple (or SEEM-pley).

It can also take on the connotation of “bland” or “lacking” in something, particularly when describing food.

It’s not complicado at all to figure out this word.

But it’s divertido to work out this one.

Just like the word for “happy”—and many others—whether you use ser or estar before this adjective can change its meaning. See here:

The above means that Juan is a fun person in general. Remember that ser is used to talk about general situations, properties or things that are always true.

Meanwhile, Juan está divertido hoy (Juan is fun today) suggests he isn’t normally so fun, but today is an exception. The use of estar in this version of the statement highlights the temporary nature of Juan being fun.

If you think adjectives are boring, you’re wrong. Stick with it.

Once again, note that the use of ser or estar can modify the meaning of this adjective, albeit in a slightly different way. Something or someone can be boring (es aburrido), or can be bored (está aburrido).

This can be used to talk about rich people, for example:

You can also say food is rico, for example:

Note the different use of ser and estar with these different meanings. You’ve got one use that’s describing a property of a person’s being, and another describing a temporary taste being perceived at the moment.

Like in English, you can talk about someone being poor, as in not having any money.

Or you can use in an exclamation or expression of sympathy for someone:

This is suggesting she’s not having a good time, although she may in fact be rica in the context of wealth.

An alternative to saying food is rico is delicioso.

This is a strong word, and you can always add a disgusted face for extra effect.

You don’t have to be inteligente to work this one out.

Estúpido is also a word meaning the same thing, but it’s actually not that commonly used.

You got that one, right?

You can say “los viejos” to casually refer to your parents, although they might not like it.

This isn’t generally considered to be offensive or rude, but that all depends on the parents.

As in English, this can refer to a person.

Or it can refer to a shop or establishment.

Again, note the difference in the use of the verbs ser and estar.

The shop could also be closed late, if it’s in a country that takes its siesta seriously.

Did someone say siesta?

Cansado isn’t to be confused with casado, which means married.

This is exactly what you don’t want to be during siesta time.

The reason for the siesta during this sunny time of day.

You can use this to talk about the lower temperatures on the thermometer.

Answers on a postcard please.

¿O son más baratos? (Or are they cheaper?)

I’m sure you can learn the word for fast muy rápido if you didn’t know it already.

But remember to slow down if this list is too much information all at once.

We all know this one already, thanks to Ricky Martin and his “Livin’ la Vida Loca.”

This can also be used as a suggestion or order, in addition to an adjective meaning “calm” or “tranquil.”

If you say “tranquilo” to someone who’s worked up, you’re telling them to calm down. It’s a pleasant way to say this and be reassuring, when said in a calming tone.

If you go to the gym every day, you’ll get fuerte, hopefully.

But if you still feel un poco débil (a little weak), don’t be too hard on yourself.

You could be un poco enfermo (a little sick) or you could just need more time, and perhaps a gym instructor.

As you might have guessed, this can also mean “sane,” in reference to mental/emotional health. Either way, it’s definitely a compliment or a positive thing to be.

This isn’t just about flavor, it can also be a compliment, referring to someone’s sweet nature.

Or the person talking might be confusing you with that big sticky bun you’re standing next to—and instead say está dulce, which is used to describe a sweet taste. Again, note how using ser and estar can change the meaning of the adjective from a permanent personality trait to the temporary flavor of a food.

Salado more directly means “salty,” but can describe any savory dish. It’s also used in a number of colloquialisms around Latin America, so keep an ear out for those!

Let’s hope the place where you’re buying the sticky buns is limpio and barato too, why not?

Hopefully es un día seco (it’s a dry day), so you won’t get mojado on the way to the other bakery.

I already gave this one away, didn’t I? This word is useful if it does start raining.

Did your favorite sweater get mojado?

And your friend stole your umbrella and ran away?

That friend shouldn’t have done that under any circumstances.

What your vocabulary notebook’s gonna look like once you write down all these great new words.

I can’t say how you’ll look when you’ve finished this. Probably the same as when you started.

Maybe your notebook will be más gordo if you download this post as a PDF, print it and stick it in your notebook?

Just in case you’d forgotten the basics after learning all these new words.

So, go on and be un(a) estudiante bueno/a (a good student) and learn this whole list!

You’ll be happy like Pharrell if you do (I did say we were taking a break, not forgetting about him altogether).

It’ll be divertido, simple and you’ll come across as really inteligente once you’re using these adjectives in your everyday Spanish life.