Learn German by Yourself: 8 Simple Steps to Speak German

Wondering how to learn German by yourself?

There’s no shortage of tips, tricks, strategies and resources for learning German at home these day.

But what’s actually effective? What’s really worth your time?

This guide will show you the best way to learn German alone in eight practical steps.

Start with learning the German alphabet.

Listen to how each letter sounds on its own compared to letter combinations. Listen for differences between English and German letter sounds, too. Just like in English, two letters together can sound quite different from either of the two letters by themselves.

The video below is very useful—a German native speaker will walk you through individual letter sounds and letter combos.

Once you’ve done that, don’t miss our post on tricky German pronunciations.

After you’ve mastered the alphabet and letter sounds, it’s time to learn some “framework words.” These are easy, common words that will form the foundation of your vocabulary building.

Think about the words you can’t do without in English, and look up their German equivalents. Fantastic starters are:

3. Expand Your Vocabulary with Nouns, Verbs and Adjectives

Here are some word lists that you can pull from:

And this video has 100 German adjectives for beginners:

Okay, you’ve got some essential German words under your belt. Now it’s time to start using them.

This is all about learning German sentence structure and word order.

You can find a straightforward but thorough explanation of German word order at Dartmouth College’s German Department website.

Then, you can practice using those rules for yourself with these free online exercises—just click a series of words in the correct order to build German sentences.

Luckily, people will probably know what you’re trying to communicate even if you get the word order wrong, but you should do your best to try and correctly order your sentences.

This is one of those “language hacks” that can get you on the road to real German communication faster.

Now that you’ve learned German word order, you can start hanging out with some basic German phrases. Just like with single words, begin practicing simple phrases that you might say on an average day.

For example, “I would like a soy milk cappuccino please.”

Choose whatever would be most useful for you in daily life in Germany! (This won’t just help you learn how to speak German—it’s also very motivating to imagine a future life living or traveling in Germany.)

6. Watch Movies and Videos in German (Dubbed, Then Authentic)

Once you can understand some very basic German, you could be creative with your learning style and watch a movie you’ve previously seen—but watch it dubbed in German.

As your level improves, or to give it a boost now, try watching some German films with German subtitles. Reading the actual words you’re hearing (in German) as they’re spoken will be so helpful to your language pursuits.

If you’d rather get some quick language immersion, you can watch German videos on YouTube. This has the benefit of letting you find content about almost any topic, so you can watch something that engages you and motivates you to learn.

Videos online can even be incorporated into full German lessons, especially if they have accurate German subtitles. In this way, you can learn and absorb German through multiple contexts: visual, audio and textual. Plus, since they’re typically short in length, these videos can help you prepare for longer media like movies.

You can take your learning even further by using the FluentU language learning program. It includes accurate German subtitles that show contextual definitions on-demand. Just click on or hover over the word you want to check.

FluentU makes it possible to learn from authentic videos, which are the type that native German speakers actually watch. This includes movie clips, entertaining commercials, interesting talks, vlogs and other native content. 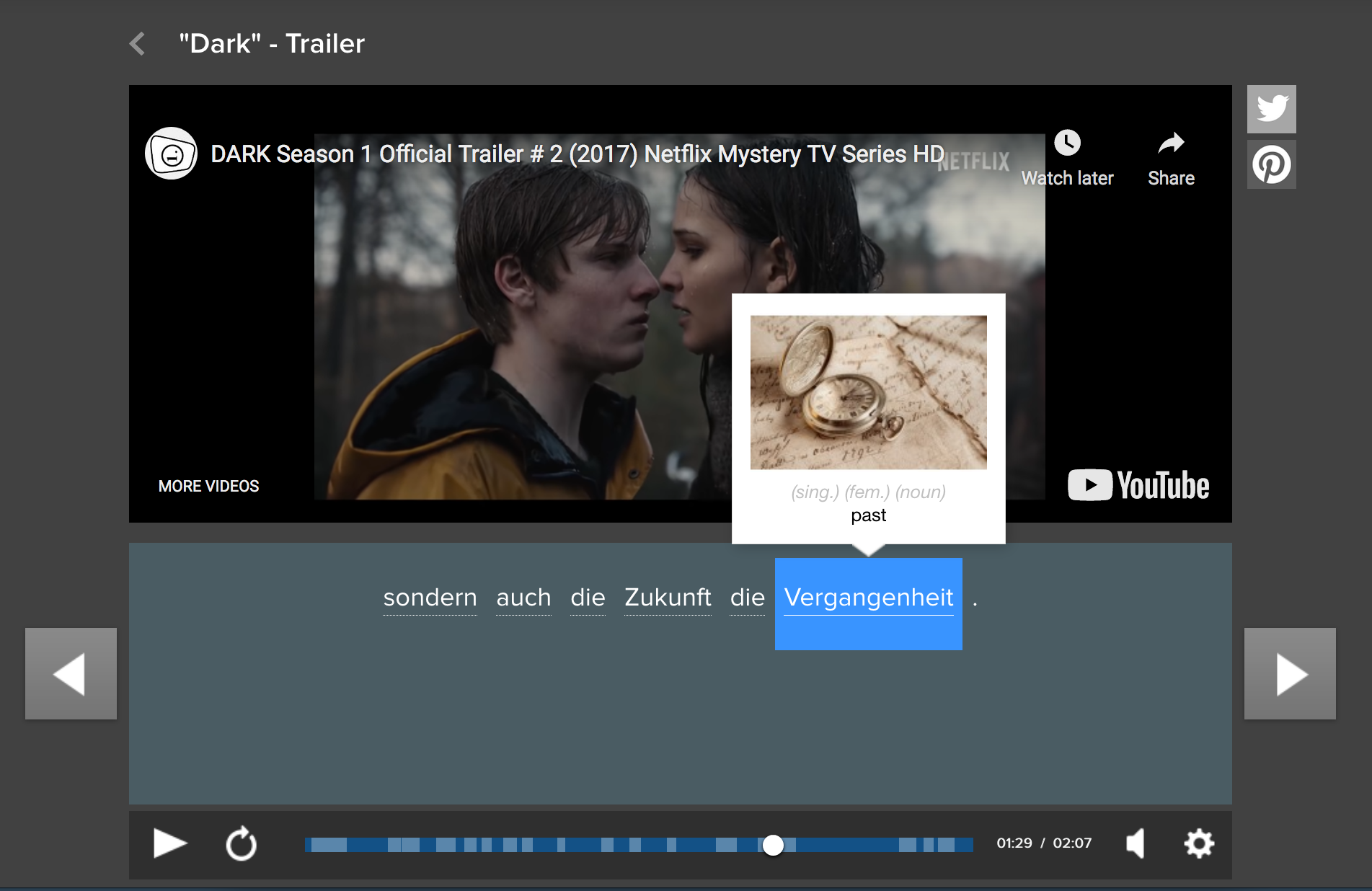 This program also lets you speak and type answers into personalized quizzes, for a well-rounded learning program. FluentU can be accessed on the website, or through the iOS and Android apps.

When you watch videos and movies in German, it helps your mind make stronger connections between the words you’re learning and the contexts they appear in. It’s a great way to start thinking in the language, which is vital for becoming fluent.

7. Read the news in German

After getting exposed to some German movies, make sure you’re paying attention to those reading comprehension skills, too. Reading German news is a tried-and-true method to do this.

Highlight any words that don’t make sense and then look them up later in a German dictionary.

8. Connect with Other German Learners or Speakers

Finally, we know this is a guide on how to learn German by yourself, but it’s super helpful to connect with native German speakers, or even fellow German learners!

Use a website like Meetup to meet with people who have an active interest in learning German as well, so you can all practice together.

They’ll also be a source of extra accountability and motivation. You could use similar sites to meet a German friend and practice speaking the language together.

Although we’ve already seen numerous ways to learn German, I have even more methods that I have yet to share with you, beyond these eight steps!

Fun (and Less Traditional) Ways to Practice and Learn German

Some additional things you might want to consider are: using German textbooks, smartphone apps, reading, immersion and getting involved in the culture. Plus the tips we go into below!

Be sure to mix these techniques into your studies from the start so you’re getting consistent, well-rounded communication and comprehension practice.

Don’t be afraid to really focus on the techniques that work well for you. The best way to learn German might look a little different from person to person, and that’s okay.

First, check out this post on German learning podcasts. Yes, you can indeed learn German on-the-go.

As an alternative way to concentrate on your German pronunciation while being entertained, podcasts are an intriguing and fun way to learn German.

You can listen to lessons on German idioms, colloquialisms and even some cheeky words to banter with the local Deutschen.

The most popular podcast out there for German learners is most likely GermanPod101 —and it is certainly popular for good reason.

There are hundreds of audio and video lessons, and the collection is always growing with fresh material for all skill levels. Yup, this covers you from newbie to nearly-fluent.

With a membership, you’ll have access to all of these and be privy to interactive learning tools like SRS flashcards, PDF transcripts, community forums and a handy app.

I mentioned it earlier, but I just need to stress that Meetup is a fantastic website for finding like-minded people who may also want to meet you.

You can find a German friend, or others learning how to speak German as well. You could go to a German restaurant, practice ordering with the waitstaff and try to have a fluent German conversation—now that’s a great way to learn!

Yes, there’s even stand-up comedy about the German language! “What’s So Funny About German” is a 10-part series provided by BBC videos that features stand-up comedian Henning Wenn.

The series deals with a lot of topics, including the German alphabet, telling the time, politeness, gender and even some jokes. This is one of most amusing ways to immerse yourself in German and have a laugh at some of the challenging things you have been learning.

Once you’ve gone through all of these tips and you want even more free resources for your German studies, check out this article as well.

Fluency in German doesn’t have to come with a price tag. This experienced German learner shares how to learn German for free with his 13 favorite tools. Check out these…

How to Approach German from an English-speaking Standpoint

If you’re an Englisch speaker and wish Deutsch zu sprechen, there are a few things to keep in mind to aid you on your journey to master the German language by yourself.

So as you can see, the grammatical side of German can be tricky to learn at the beginning. However, once you get the hang of some grammar, it’s much easier from then on.

Now that you have many tips and tools to succeed, go out there and learn German solo!