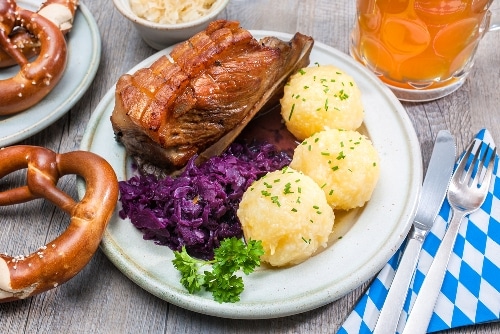 So does speaking German at a German restaurant.

Whether you’re traveling to Germany, spending a semester in Austria or have just moved to Luxembourg, dining auf Deutsch (in German) makes eating out all that more of an authentic experience.

Impress your friends, the locals and the people you’re dining with by showing off your German skills.

To aid in proper digestion and language learning, here are 15 basic sentences that cover most aspects of the restaurant experience.

But first, a few bonus tips about eating in a German restaurant.

Sure, you’ve heard of Bratwurst and Schnitzel. The Pommes (french fries) may be the best you’ll ever find. You’ve invariably eaten Sauerkraut and potato salad in your home countries. But friend, you’ve only begun.

Germany is a smorgasbord of culinary delight. Each area of the country has dishes unique to that region, which can easily be found in local restaurants.

In Bremen enjoy some Labskaus, a corned beef dish with beetroot, herring, mashed potatoes and a side of fried egg and pickled cucumber. In Mecklenburg-Vorpommern try out some Grööner Hein, a pear, ham and string bean stew.

A Note About Tipping at Restaurants in Germany

The bad news first: You are expected to tip (sorry Brits and Irish). The good news: It’s not as much as in America.

Because German waiters and waitresses are paid better than in the United States, the tip is generally about 5-10% of the bill. This means that for a full meal the tip isn’t usually more than a couple of euros. The complicated part is that you can’t simply leave money on the table after paying the bill.

The typical way to tip is to tell the waiter the total amount you want to pay, adding the tip to the bill (and usually rounding to a whole euro amount). If your meal comes to 11.20 euros you can say to the waiter dreizehn (thirteen), and she’ll deduct that amount from the bills you give her. For the purist, here’s the full sentence:

Ich möchte insgesamt dreizehn zahlen. (I would like to pay thirteen in total).

Unlike in America and Ireland, in Germany they make change at the table—pulling bills and coins from the fashionable fanny-packs on their waists. An alternative way to go is to tell her how much change you want back, taking on all the math yourself.

Ich möchte zwei Euro zurück. (I would like two euros back).

Now that you’re fully briefed on German restaurant culture, here are 15 phrases you’ll need to get through the meal entirely in German.


In most German restaurants you must wait to be seated. Mostly likely the first thing you’ll be asked is how many people are in your party. This sentence can be adapted to whatever size your group is by substituting zwei (two) for the appropriate number.


If other people join you later or if you’re eating at a less formal establishment, you might find yourself needing an extra chair or two. This sentence is handy for charming a place to sit away from other tables.

Maybe you’re at the bar, having a few beers, when you suddenly notice that you’re getting hungry. You won’t have to worry about starving if you know how to ask for the menu, nor being limited to just Bratwurst or Sauerkraut.

4. Was können Sie empfehlen? (What do you recommend?)

A little insider insight never hurts. This can be asked of the waiter or waitress, a stranger at the next table or a native German that you’re dining with. (Although keep in mind that if you’re friends with this person, you need the informal “you,” making the sentence read: Was kannst du empfehlen?)

5. Ich möchte jetzt bestellen. (I would like to order now.)

Just in case you need to get the waiter’s attention, this phrase will be handy.

Once you’ve decided what you want to order, it would go something like this: Ich möchte den Fisch bitte (I would like the fish, please). Not a seafood person? Substitute Fisch for whatever looks good to you, remembering to add the appropriate article with it.

6. Möchten Sie eine Vorspeise? (Would you like an appetizer?)


May I interest you in some Rollmops (pickled herring with onions and gherkins)? Or maybe you’d like to start with some Bierkäse to go with your Weizenbier (It is called “beer cheese” for a reason). Maybe a simple meat and cheese platter to go with your rolls?

7. Haben Sie vegetarische Gerichte? (Do you have vegetarian dishes?)


According to various polls, this question is applicable for about 3-5% of Americans and most European countries. It’s becoming increasingly popular in Germany, so if you’re of the non-meat persuasion you can feel pretty confident that most restaurants have you covered.

8. Ich möchte gerne etwas trinken. (I would like something to drink.)


There’s no fear of leaving a German restaurant thirsty if you can get this sentence down. Not only can your typical beverages be found, but also Radler, which is a mix of beer and lemonade. Literally meaning “bicycler,” it’s a popular summer drink that refreshes without getting a person drunk too quickly.

9. Was für Bier haben Sie? (What types of beer do you have?)

If you don’t have to get on a bicycle for the rest of the day, you might as well indulge. Germany’s reputation for fine beer-crafting is well deserved, and it’s generally cheaper than in the United States or UK. Germany also has the famous Reinheitsgebot, or purity law, that states that beer can only be made from water, barley and hops.

Germans take pride in their beer. You might as well ask for one.

10. Könnte ich eine Tasse Kaffee haben? (Could I have a cup of coffee?)

Why live in danger of not getting your caffeine fix? This simple sentence comes in handy at all times of the day.

No reason to let the good times end, nor to stop speaking German.

12. Hat es Ihnen geschmeckt? (Did you enjoy your meal/ Did it taste good?)

This may be asked by a dutiful waitress (or one looking for a good tip). Some responses to choose from: Prima! (Excellent!), So la la (so so) or Nicht so gut (Not very good).


This is very formal and you may not hear it often. A simple Entschuldigung (excuse me) also works well. But anything is better than snapping your fingers or clapping your hands!

It is somewhat traditional to say “Herr Ober” (Mr. Waiter). To get the attention of a waitress, “Fräulein” (Miss) is acceptable, although it should be noted that the term Fräulein, a diminutive of Frau (woman), is rarely used these days and some believe it doesn’t recognize a woman’s full autonomy.

It’s time to get the Rechnung, or bill. You’ll find that most German meals are reasonably priced. If you’re an American you’ll appreciate that the price listed is the price you pay for—tax already included! If you’ve just ordered drinks, the waitress will often do the math in her head for you: the benefit of a country with an engineering mind.

Inevitably you’re going to run into situations not covered by these handy 15 sentences. Don’t panic. Dining in public is an intuitive exercise, and even if the waiter doesn’t know English, some hand-pointing and incessant smiling will always get you through. Just sit back, relax and enjoy your meal.

As they say in Germany, Guten Appetit! (Enjoy your meal!)

You’ll get to learn German with content that native German speakers actually watch on the regular, from Volkswagen commercials to funny YouTube videos, scenes from “Guardians of the Galaxy” and the hit song “Let it Go” from “Frozen.”