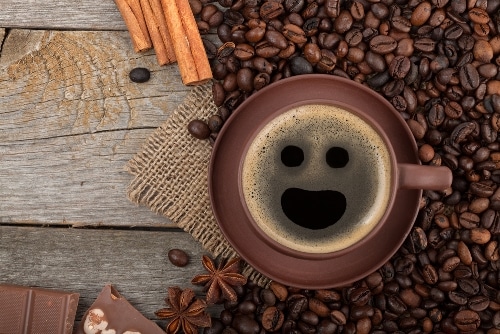 The German Coffee Drinker’s Guide: How to Order a Cup of Joe in German

Sometimes, before you can even start to think of speaking German…

…you just need that cup of coffee.

Which can be a cruel irony if you need to speak German to get it.

By knowing only a handful of key sentences, you can successfully pull off a spoken exchange that lands that heavenly caffeinated beverage in your hand and powers you through the language learning process.

Fortunately, conversations at the café counter tend to be simple and predictable, and many of the items on German menus look similar to their English counterparts.

To make sure you can sip coffee in a German-speaking country with ease and comfort, we’ll provide not only a list of simple sentences that will come in handy once you walk through the doors of the café, but also a bit of background on German café culture.

Understanding the Café Culture in Germany

The history of coffee in Germany

Coffee snobs everywhere can rest assured that you’re unlikely to run into the incivility of percolated coffee in Germany. Not only are the Germans proponents of filtered coffee—they created it. (Paper coffee filters were invented by Melitta Bentz in 1908 and the electronic drip brewer by Gottlob Widmann in 1954.)

Being a nation that leans more towards coffee than tea, Germany doesn’t mess around with this beloved beverage. In fact, there’s even an annual “Day of Coffee” there.

For more information about German coffee tradition, check out this post from the Coffee Tasting Club.

German cafés: Not just about the coffee

If you’re used to the American or British model of cafés, you may be shocked the first time you see a group sitting on the couches, drinking beer. Cafés in Germany not only serve alcohol, but tend to look more like bars as the evening progresses. It’s not unlikely for many cafés to clear out tables at night to make room for a party crowd.

If you’re looking for a quiet, relaxing place to curl up with a good book in the daytime, however, have no fear. It’s still very much a coffee crowd in the café in daylight and evening hours, acting with the expected propriety of the coffee crowd.

Bakeries are everywhere in Germany. Unlike in many English-speaking countries, where walking through their doors is often considered a treat, the German Bäckerei is more incorporated into everyday life. Not only can you find inexpensive fresh rolls and sandwiches, but you can get less pricy coffee as well. Although you may not have all the choices of a café, a cup of Schwarzkaffee (black coffee) is sometimes half the price.

How to Read a German Café Menu

As mentioned before, the easiest part of ordering a cup of coffee is often figuring out the German word for it, as both the Germans and English have tended to steal the names of drinks from Italy.

Here are some of your basic choices that will be listed on the overhead board:

If you’re looking to try something uniquely German, feel free to order the Radler (shandy). Meaning “cyclist,” it’s a mixture of beer and lemonade, a great companion to German study on those hot summer days.

So, What’s the Deal with Tipping?

Ah, the intricacies of German etiquette. Here’s the question that everyone wants to know when eating or drinking in a new country but is too nervous to ask the waiter: What’s the expected tip?

Typically, when it appears you’re done with your cup of coffee, the waitress will come over wearing a money pouch. She’ll tell you the price of the bill. You’ll hand her the money. And then you’ll tell her how much money you want back:

Or if you’re feeling particularly generous:

Stimmt so. (Keep the change.)

It’s not common to leave money on the table. Instead, you have to do some quick math. Typically, for a small bill it’s usually enough to round up to the nearest euro amount.

Even for a large meal, you’re only ever expected to tip a few euros. If you’re still wondering about tipping both inside and outside of cafés, you can check out this handy guide from Who to Tip.

How to Order Coffee in German: 14 Phrases for Caffeine Aficionados

Without further delay, here’s a list of easy sentences to make your café experience in German complete.

Simple and to the point. In fact, your efficiency will probably be appreciated. If they ask “Mit Milch?” (With milk?), you can make the barista smile by replying, “Schwarz wie mein Herz” (Black like my heart).

If you’re in the mood for a little less caffeine, try one of these variations:

2. Was können Sie empfehlen? (What would you recommend?)

Not only a good way to take advantage of local knowledge, but a useful trick to start a conversation in German. Even if you’re not entirely confident in your grasp of the language, you can probably pick out items from the menu among all the unknown words you hear back.

Not only handy in cafés, but in expressing all your desires in life. Why stop at coffee?

4. Zum Mitnehmen (To take away)

This useful little phrase can save you having to down the entire coffee quickly when you were hoping to get cardboard but got glass instead. But then again, why not sit down, take a load off and practice your German?

Because the barista is likely to be a stranger, you’re expected to use the formal form of “you,” Sie. Saying du instead may get you a strange look, or worse, spit in your Americano.

Although we all instinctively know that coffee tends to be hot, the waitress may be good enough to offer a little reminder. Although you probably won’t use the phrase yourself, it’s nice to know what the other person is saying.

Have you ever walked away from the counter and stood there forever like a fool trying to find where the sugar and milk are kept? This will be especially useful for bakery and coffee stands, as most cafés put the sugar on the saucer.

In case you feel your tummy starting to rumble. Some cafés have English menus as well, if you’re not feeling particularly adventurous.

Although the prices will usually be listed, you don’t want to have to be afraid of the bill when it comes. This way, you can avoid having to wash dishes in the back room to pay for your drinks.

10. Welche Größe möchten Sie? (What size would you like?)

Typically, there are only two options: klein (small) or gross (large), which correspond to size expectations in most other countries. Alternatively, you can be proactive and include the size in your order:

Ich möchte einen kleinen Kaffee, bitte. (I would like a small coffee, please.)

Again, this is to be asked by the waiter, unless you’ve decided to reverse roles for the fun of it.

Unlike cafés in some other countries, a waitress will generally take your order after you’re seated. In the case that you do place an order at the counter, you don’t have to stand around for waiting for it. They’ll generally find you and bring it over.

13. Wo sind die Toiletten, bitte? (Where are the bathrooms, please?)

Hey, we all know what coffee does.

The answer is usually yes. However, you may have to ask:

Not only does the first fuel the second, but cafés give you the opportunity to try out your German in a low-pressure environment or simply relax and hear it spoken around you.

And equipped with the simple sentences above, you don’t have to worry about going through the day without that much-needed caffeine jolt.

Anyone for a second cup?

You’ll get to learn German with content that native German speakers watch on the regular, from Volkswagen commercials to funny YouTube videos, scenes from “Guardians of the Galaxy” and the hit song “Let It Go” from “Frozen.”

German Possessive Adjectives: 3 Steps to Mastering What’s Whose
Do You Know How to Count in German? Get Started Easily Now!